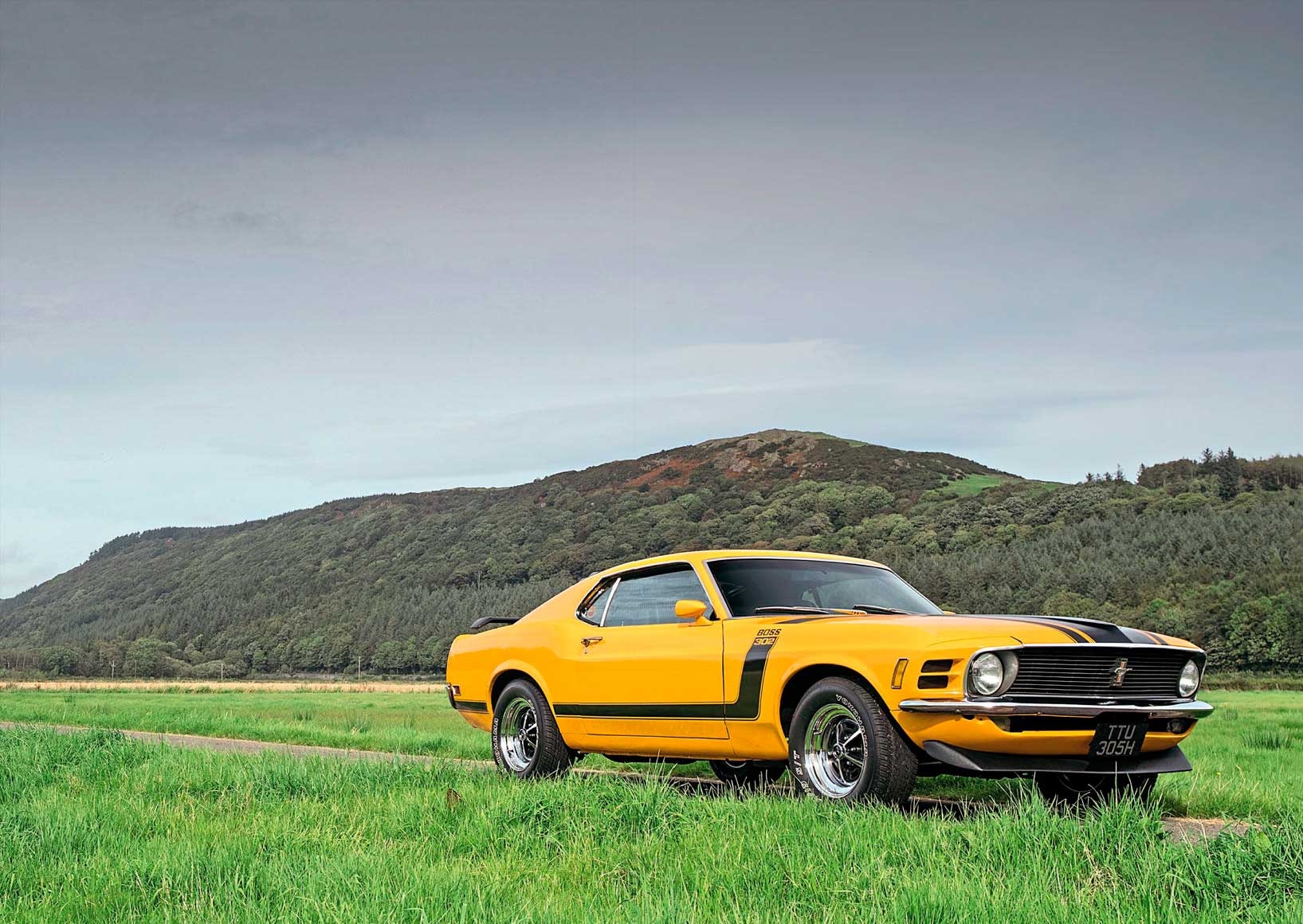 Payin’ the cost to be the Boss. The Boss Ford’s Better Idea. Think restoring a Mustang is a simple, off-the-shelf process? Then try taking on a rare Boss 302. The owner of this car had to dig deep to find the patience and the funds required to get everything right, nevertheless it earned him a place on the Car of the Year stand last year… 1970 Ford Mustang Boss 302. Words: Nigel Boothman. Photography: Jonathan Fleetwood.

It’s lucky that Mark is the kind of guy who sees things through. You need a certain amount of commitment to cough up $500 for nothing more than a vacuum unit on a distributor rather than compromise on a non-Boss alternative for a tenth of the price. But you’ll have realised already that there are two ways to approach a restoration like this: get it running, or get it right. And once you decide you’re going to get it right, there’s no turning back, because if you start to give up and fit the wrong bits as you run out of time or money, you’ve spoilt the investment you made earlier in the job.

Let’s rewind a little and discover how a motorcycle enthusiast from Cumbria ended up with one of the most desirable four-wheeled classics America ever produced. It turns out that a fondness for American landscapes had taken Mark to more than 40 states during his years holidaying in the US on two wheels, but the ‘road to Damascus’ moment only happened when he stepped into a dealer’s showroom in Los Angeles.

“There was a ’1967 Shelby fastback in there and it blew my mind… I thought it was the coolest car I’d ever seen,” he recalls. “I mentioned it to some friends at home and one of them said he knew someone who was selling a car like that. I pointed out that I meant a classic Mustang, not a new one, and it had to be a fastback. He said ‘yes, it is… and I think it’s a ’1967 too’.”

It wasn’t a Shelby but it was a pretty appealing car, despite needing a lot of renovation. Mark duly bought it and found it a pleasure to work on, not least because most parts were just a phone call or a mouse click away. It’s a Bullitt replica, and getting it smart, safe and reliable taught Mark a lot about Mustangs. During that learning process, he found out about the Boss family.

For those of you who might be a little hazy about the various special Mustangs – Shelby, Boss, Mach 1 – the Boss fits in as follows. The Shelbys came first, with fastback Mustangs initially converted to a stripped-out high performance specification at Carroll Shelby’s works in Los Angeles in 1965. By 1967, Dearborn had softened and expanded the range a little and for 1968, when a convertible arrived, production moved away from the Shelby plant.

Mach 1 models were less expensive and stuck with a fastback body only, arriving in 1969 with a 351cu in V8 and big-block 390 and 428 options. They ran alongside the Mustang GT model for one year but with a memorable name and louder graphics, effectively killed it off – the GT was discontinued for 1970. That leaves us with the Boss. The Boss 302 and 429 were produced in 1969 and ’70, and like the original Shelby GT350s they were there to homologate a set of features Ford needed the Mustang to have for competition: the 302 went SCCA Trans-Am racing, the 429 for NASCAR. It worked; the Boss 302 took the Trans- Am Championship in 1970. Both were replaced for 1971 by the more refined Boss 351 in the new, longer bodyshell, but it’s the ’69 and ’70 cars that people lust after.

And with good reason. If you want to know which were the serious performance machines in Ford’s roster at the end of the Sixties, look beyond the hood scoops and the funky stripes. The Boss 302, for instance, came with staggered shock absorbers, power front discs and heavyduty rear drum brakes, quick-ratio steering and a rev limiter. That small-block V8 was so close to race tune that Ford feared (with some justification) that customers could blow it up with nothing more than a heavy right foot.

So you can see why Mark fancied one. What he actually found, though, was a painted shell and a few boxes of bits: “Having worked on the first one, I thought this would be no problem. But it was.” Around that time Mark attended the NEC Classic Motor Show with his ’67 fastback on the Mustang Owners Club stand. He got talking to Chris York and Barry Craven, both well-known and experienced Mustang people, and between them they made Mark determined to get the restoration right. It was a big decision because it’s not just a case of writing cheques. You need patience, persistence and the right contacts.

“I started with an engine block and two cylinder heads,” says Mark. “It took me 18 months to find the rest of the driveline. Luckily I got to know Roger Parks in Florida. He’s restored a few Boss Mustangs and was a great help in sourcing all kinds of things.” That includes a genuine, Boss-correct close-ratio four-speed transmission, but the engine proved to be more of a challenge. Mark had priced up a professional build from specialists in the US and discovered it would be so costly that he’d rather do it himself. So having assembled all the right parts – forged pistons and rods, a new crankshaft to replace the cracked original – he took the block to Malcolm and Michael at Lancaster Engines.

“Malcolm said it had probably been blown up three times already, but he reckoned he could save it,” says Mark. “It got a +40 overbore and I took it off home to build it.” When the time came, quite a while later, to install the engine in the car and turn the key, Mark thought he’d never done anything so nerve-racking in his life: “It ran for a short time, but it didn’t sound right. I turned it off and took the spark plugs out. When number four plug was removed, a jet of water shot across the garage.”

The heart-rending moment had been caused by a mere 0.002in movement of the cylinder liner, which dropped and allowed coolant into the bore. It meant another total engine strip-down, and back to Malcolm for tea and sympathy. Malcolm also fitted a new cylinder liner; not something you can obtain in exactly the specification they needed, but with some careful machining an item from a Volvo lorry engine did the trick. The engine went back together with all the other parts Mark had been able to source. But there were still gaps – an original Boss-specific 780cfm Holley is a crazy $2000 rarity, if you ever see one for sale, so there’s a very similar 750cfm double-pumper on there now.

While the long strife of two engine builds had been proceeding, Mark also sourced and fitted new springs to exact Boss 302 specification, new brake discs and rebuild kits for the calipers. A good number of the front axle components are common to other 1970 Mustangs so the troubles eased for a time. Nevertheless, the content of those boxes – supposedly bits of Boss – probably slowed the process down rather than speeding it up. The window glass turned out to be from a coupe, not a fastback, and the dashboard was a 1970 dash, but not one with a tachometer. And this particular Boss 302 had a tachometer. Another one of those thousand-dollar bills went west.

A new windscreen arrived in the wrong kind of packaging and it wasn’t until Mark was set up with suction cups and adhesive (it’s a glue-in screen) that he opened the package and found one corner was smashed. He did at least have seats, but they were so knackered he stripped them to the frames and rebuilt them with new foam and coverings from a kit. The results are impressive.

“You need patience, a warm room and very strong fingernails,” he says. Mark’s trimming skills didn’t end there, as he installed a new headlining after finding replacements for the missing steel bows. The paint was perhaps the one significant bullet that Mark dodged, as the work to the shell had been done very well indeed and Mark was able to contact the painter for perfect matches to the Grabber Orange finish when he needed to address a couple of touch-ups during the restoration. “It was a hell of a project… the neck-end of three years and I don’t know how many hours. I’m lucky to have a very understanding wife!”

So how does it drive, then? Mark reckons there’s about 400bhp at his beck and call, yet despite this it’s smoother and quieter than his ’67. “The ports are massive, so lowdown torque is nothing special,” he says. “But once it comes on cam – it’s using a Comp Cams Thumper, which I’m going to change for something a bit more sensible – it really moves. By 4000rpm it’s already going too fast for the chassis!” It’s a stunning job with such a level of detail, but has it all been worth it? “Definitely, but I’m not sure I’d restore another Boss. I’d love a 1969 Mach 1 with a Cobra Jet 428, though…” Watch this space. In a few years, we might be back in this beautiful South Lakes scenery, listening to seven litres of Ford muscle bounce off the hillsides. Until then, Mark’s Boss 302 is a fine addition to the view.

Pretty much everyone who owns a late 1960s muscle car will have a tale of how their machine was underrated by the factory to dodge self-imposed horsepower limits or calm a nervous insurance industry, but a pinch of salt is often required. Not here. Both the Boss 302 (290bhp) and the Boss 429 (375bhp) made more than they claimed but that isn’t the whole story.

With an afternoon of spannertwirling – say new headers and carburation – you could put these engines into race spec and find 400-plus bhp from the 302 and 515bhp from the 429. As road cars, they were fitted with Thermactor ‘smog pumps’ and were muzzled in various ways, especially the 429, which actually used a smaller Holley four-barrel than that fitted to the Boss 302. The smaller Boss was less compromised and drew high praise as a street machine. As Car and Driver said in 1969: “It’s what the Shelbys should have been but weren’t.”

Hurst shifter… of course! Dash had the optional Tachometer. The Boss lives in one of the most beautiful parts of the country… the Lake District. The Boss Mustangs were homologated for SCCA racing. Mark’s ‘starter’ Stang… a ’67 fastback. 302 is rated at 290bhp… but those in the know can tweak it up to 400! Mark Nicholson with probably one of the neatest garages we’ve ever seen! Fantastic original ’70s dyno tune sticker.