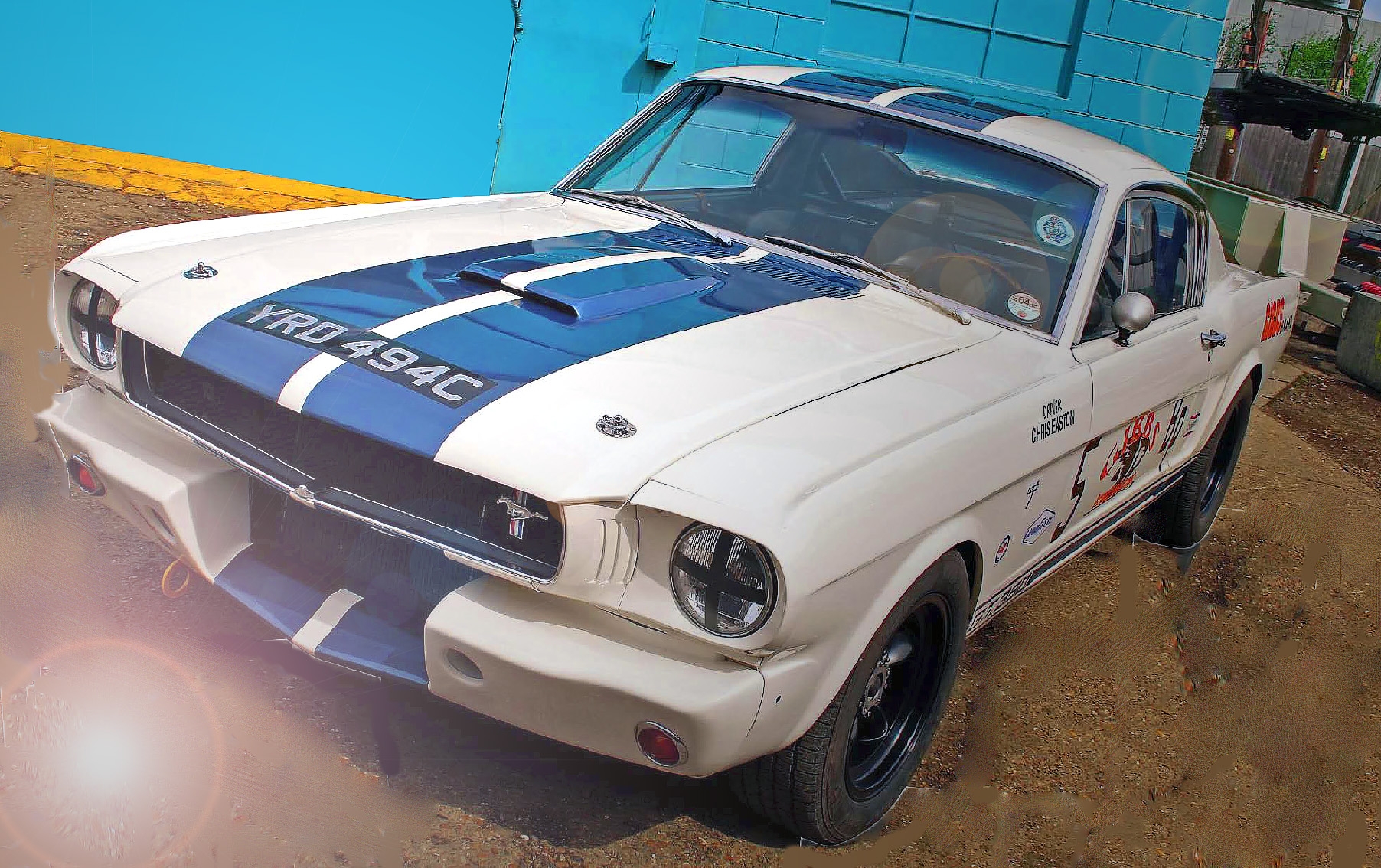 And old flame rekindled. Chris Easton’s 1965 Shelby Mustang GT350R tribute might not have cost the almost million dollars that an original would, but it’s every bit as much fun. Back in the halcyon days of his youth when he was 19 years old, Chris Easton used to run a 1965 K-Code Mustang, which he later sold for £600; back in those days it was a struggle to get even that for it. Now 35 years later, Chris has more time and a little more cash to indulge in his passion for cars, and fancied owning a Shelby Mustang GT350R, possibly the most collectable of all Shelby variants, with a massive price tag to match. However, while surﬁng the internet one day, he spotted a GT350R tribute that had been built to FIA racing speciﬁcation; he made a bid, but it fell quite short of the asking price.

Undeterred, Chris went to view the car which had been imported from the US and when he saw it for the ﬁrst time, was impressed by its totally rust-free condition and high speciﬁcation build. The car had been taken off the road in 1968 in a rust free and undamaged condition and carefully dry stored until around 2004, when it was built into a GT350R tribute by David Salvaggio of Salvaggio Auto Design of Port Washington, Wisconsin. 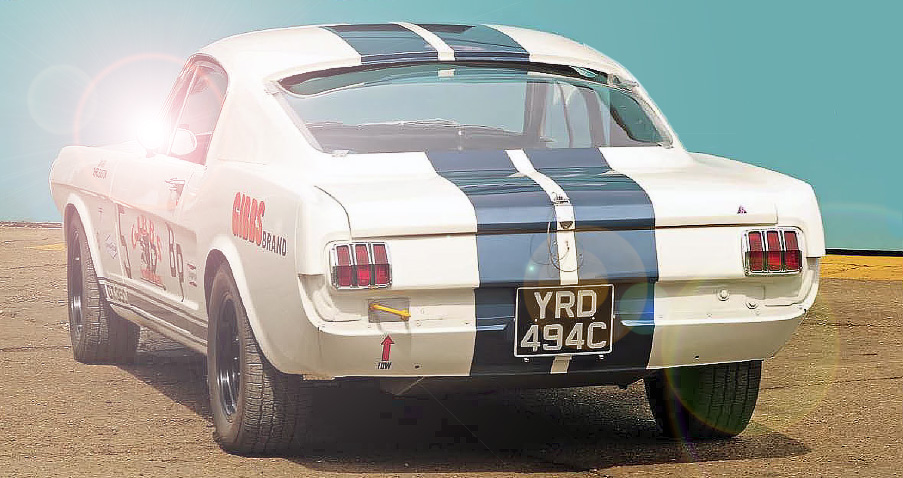 “Nowadays there are a lot of so-called tribute builds that have had a few decals stuck on the side and a few ‘go faster’ bits, but they are a long way off anything like the original car,” says Chris.

“My car has been built as close as possible to a GT350R and is a genuine FIA approved competition car in every respect, gaining its Historic Technical Passport from the RAC MSA. I was completely seduced by its remarkably sound condition. The build involved the car being placed on a body rotisserie and then media blasted. The paintwork is Wimbledon white with Guardsman blue stripes and as the interior had been totally stripped out for racing, everything was visible for close inspection, with no nasty surprises of hidden rot anywhere. The vendor and I eventually managed to make a deal and I purchased the car in 2010, with a view to do some track-days, charity events, and general shows etc.”

The K-Code 289cu in engine had been rebuilt by Southern Automotive of McDonough, Georgia to FIA speciﬁcation and was rated at around 330bhp. The transmission is a Borg Warner T10 close ratio four-speed top loader, also sourced by Southern Automotive, and the back axle is a 9in locker from a Ford Fairlane with 3.89 gears. The remainder of the running gear comprises of Kelsey Hayes front disc brakes, and 10in drums to the rear. There’s also ducted piping running from the front ducts to the brakes to improve cooling. “When I was driving the car on track-days, I found there was a slight problem with braking caused by the oversized rear drums, so I’ve since had a brake compensator ﬁtted which has improved things and above all made braking a whole lot safer,” reveals Chris. The front suspension is a standard Shelby set-up with heavy-duty coils springs above upper A-frame with adjustable dampers and extra heavy duty anti-roll bar at the front. To the rear are heavy duty leaf springs, with additional radius rods and adjustable telescopic dampers.

Body wise there’s all the usual GRP panels like the bonnet, front lower apron, including that authentic metal fastener, ﬂared wheel arches to accommodate 7 x 15 wheels, and rear suspension traction bars have been incorporated into the body that sit just above the axle. There’s no boot lock, no door locks and the side windows have been replaced with handmadealuminium frames with plexiglass, and glazed which are open or shut pulled by a leather and of strap, course top vent the rear window with for heat extraction is also made from plexiglass.

Attention to detail during the build meant that exactly the correct size of rivets were used, as were the aluminium retaining blocks. The rear quarter windows are blocked off by metal plates which are ﬁxed by the identical number of rivets as on an original car. And that’s the length of detail that David Salvaggio went to when building this car; there’s even a genuine original Raydyot race mirror that’s pretty ﬂimsy and easily damaged, but can fetch around £500 nowadays.

Other competition the car include parts ﬁtted to tank and a Fuel Safe bladder inside there’ Robinsons an Andy Race Cars rear roll cage. The 7×15 American Racing Torque Thrust wheels are from a genuine Shelby race car.

The interior features a correct GRP rear deck specification that houses the spare wheel, there’s a full complement of Carroll Shelby dashboard instruments, that also features the correct long flick switch for the horn as original. The driver’s seat is a copy of a GRP racing bucket seat, trimmed with original specification vinyl covering that was an option when new, and sourced from Shelby Parts in the US. The passenger seat is stock Mustang. The seat belts are as close a copy as possible to the original Ray Brown full harnesses, which now sell for around $3000.

Sometime after Chris purchased the car he had one or two problems with the engine, which included a blown head gasket. This was duly repaired and at the same time a few other improvements were implemented, but because he wanted to increase the engine power, by upgrading the cylinder heads, and having to work within the FIA regulations, this would have meant forking out around £15,000. “Because it was unlikely I was ever going to race in the FIA Appendix K race Series, I took the decision which was pretty much based upon cost, to have another more powerful engine built using a 302 motor,” explains Chris. “This modiﬁcation is the sole original tribute from what was an extremely car, and I still have the 289 engine to ﬁt back in the car should I ever wish to do so. Phil King of Classic American Restoration Services in Waltham Abbey, Essex, built the engine and the beauty of it, is that it features a brand new 302 block and just about all other components are brand new too, and it was much cheaper than upgrading the 289 cylinder heads.

“This engine hasn’t been on the dyno yet, but it’s expected to produce around 380 – 400bhp at 1965 Shelby Mustang GT350R,” continues Chris. “It does feel a lot more powerful than the previous engine. It’s a high speciﬁcation build with the best of everything, ported and gas ﬂowed by Julian Godfrey, internally balanced, ARP head studs, a steel crankshaft, nitrided custom ground ﬂat tappet camshaft, with a 650cfm D/P Quick fuel carburettor on a Torker II manifold. There’s also a Carter circuit race sump with wind age tray, a large capacity aluminium radiator and a Mallory electronic distributor with a composite drive.

The engine currently features long tube headers, with Glasspak mufﬂers and a side-exiting system, but I’ve got a pair of Belanger Brothers headers to ﬁt. Jerry and Gaston Belanger were very famous from the late Fifties for their aftermarket performance small block headers. I found a pair in England and because no one knew quite what they were I got them for £100.”

When Chris ﬁrst acquired his GT350R he applied some custom graphics to the bodywork and ﬁnished it in the guise of an original car as raced by Dick Jordan in the States. He has since contacted the owner of the original car that still exists (sold at auction in 2012 for $990,000) but didn’t receive a very enthusiastic response. In fact the current owner preferred Chris’ car not to be in the Dick Jordan guise. “Thus respecting his wishes I removed the decals and replaced them with some that have more relevance to me personally, but still look the part,” says Chris. “I am a partner in a new business venture importing Gibbs Brand Lubricant from the US.

It’s a state of the art maintenance spray not unlike WD-40, but with many unique properties such as leaving no sticky residue and can even be painted over. It’s getting rave revues over here, particularly in the classic car world.”

Well so much for authentic looks, what’s a GT350R recreation like to drive? “It’s pretty raw and extremely ﬁerce, addictively noisy inside, which is great on a short journey, but on longer Drives I wear earplugs. It can get very hot inside too,” grins Chris. “It’s got a competition clutch that I’ve recently changed to from rod to hydraulically operated because it’s a bit more adjustable. You require plenty of revs and to pull away smoothly you can wheel spin, and ultimately the clutch is either in or out, so it’s not the easiest of cars to drive on the road, but then again it is after all built as a competition car.

“Once the engine is fully run in and in ultimate tune, the car should run mid-12s over the quarter mile which is pretty quick. The cam comes in at around 3000rpm and then the power is unleashed on a car that only weighs 1500lb. On track-days you soon learn to become a good ‘drifter’ through the corners, but with Sixties technology steering, it can become a handful at times! The noise is amazing – the inboard traction bars ﬂex and creak inside the body, just behind your ears. The GRP rear shelf also creaks because it’s ﬂexing around. “When you really open it up, you can get ﬂames coming out of the exhausts when you change gear. The downside is 15-16 mpg driven carefully, and closer to 8 or 9 mpg driven hard, plus it’s really twitchy on damp roads. The concentration required when driving is immense, you can’t relax for a second, but the fun-factor is second to none!” Okay, so Chris’ GT350R may not be the genuine article, but it does represent a mighty ﬁne tribute, and to all intents and purposes is as good as they get, but there again it didn’t cost almost one million dollars!

Interior is strictly functional, except for that wooden steering wheel!