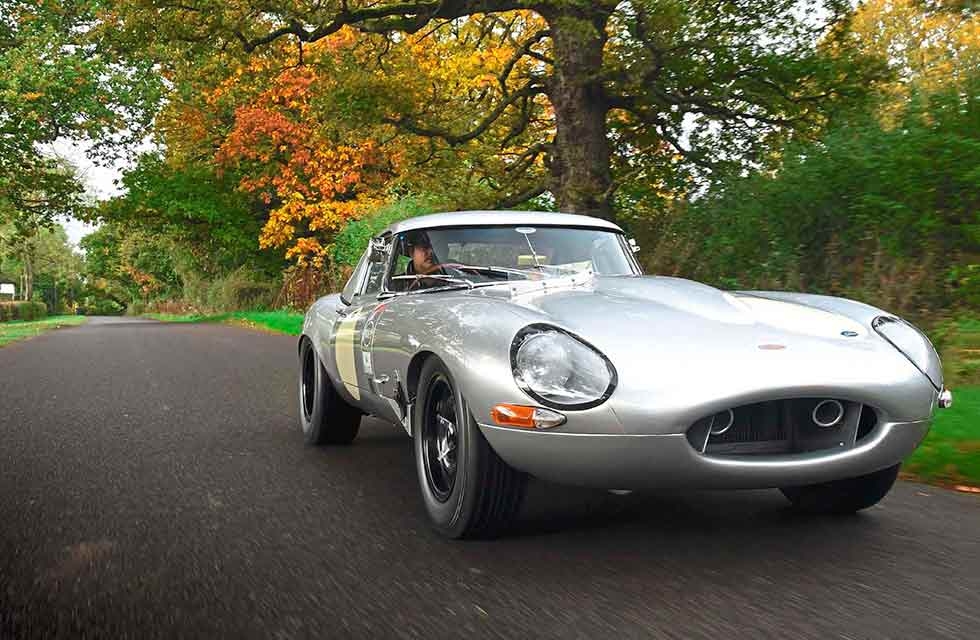 E-type Lightweight. An exact copy of the real thing, but at a fraction of the cost. The only element of this 1965 evocation of a Lightweight E-type not to match an original is its more affordable price. Words & Photography Paul Walton.

This fearsome beast is a faithful and recent recreation of the Lightweight E-type. We drive it

One of the highest prices for a forged piece of artwork was paid in 2009 when an unknowing Californian buyer paid $2million for an exact copy of Picasso’s 1902 La Femme Au Chapeau Bleu (The Woman in the Blue Hat). The fake was so credible that the buyer didn’t question the seven- figure amount, which only supported its authenticity.

This gorgeous Lightweight E-type is also an exact copy of the original – to the untrained eye, its correct muscular stance and widened body could easily allow it to pass for the real thing. Unlike the fake Picasso, the car’s relatively low value reflects its recent heritage because, at just £168,000, it’s several million pounds cheaper than a genuine Lightweight.

Even though I know it’s not real, it’s still hard to believe when I first see this silver car in E-Type UK’s Kent showroom. The stance and detailing are perfect, as is the lean, mean and muscular character, which made the originals so intimidating on the track (and still does).

The car – chassis number 1E20883 – started life a million miles away from its current configuration. When it left the Browns Lane factory on August 19 1965, it was a Carmen Red, right-hand-drive coupe with black interior. As is the case with most mass-produced cars, nothing of its early years is known, but by the mid-2000s it was in a poor state (it was so bad, that on the car’s www.XKEdata.com website entry it stated a would-be buyer changed their mind after putting a thumb through the bodywork while getting out…).

It was later bought by Mr P O’Brian, an apparent serious collector and restorer of E-types who already owned in excess of 20 beautiful examples. He had a different plan for this one, though. He sent the car to Zealia Engineering, in Cambridgeshire, to be transformed into an evocation of a Lightweight E-type, a replica of the 12 cars that Jaguar built for competition between 1962 and 1964.

Zealia was set up by Kiwi Brian Wilkinson in 1988 to specialise in recreating Lightweight E-types. Wilkinson first made his name in 1972 when he established the famed motorsport specialist Safety Devices, a company instrumental in the development and broad use of roll cages in race and rally cars. It also built and developed competition machines, including the TR8 rally car for the works Triumph team in the late Seventies.

Wilkinson – who sadly passed away in 2014 – bought his first E-type in 1977, which was modified with aluminium panels constructed by RS Panels. That car was bought by a stranger who saw it on the street and made an offer there and then. Moving into modified E-types was a natural progression for Wilkinson and it’s thought he produced more than 40 Zealia Lightweights, originally with glass-fibre panels and later replaced with aluminium.

The Carmen Red coupe was stripped and the bodywork removed, replaced by aluminium doors, bonnet, boot lid and hardtop, while a roll cage was welded into place behind the seats. It was finished in Audi Aluminium Silver which, although a modern hue from a German make, shows off the car’s gorgeous, but simple, lines perfectly. With the black, ten-hole Dunlop-style magnesium wheels and giant white roundels on both doors and on the nose, the car doesn’t look too dissimilar to the first of the original homologated Lightweights, 4WPD, which John Coombs successfully campaigned. I’ve never seen another recreation with quite the same level of detail – from the low Perspex fly- catcher halfway up the bonnet and the leather bonnet straps that secure onto triangular pieces of steel plate riveted to the front of the sills, to a row of round vents in the boot lid and hardtop.

Although Mr O’Brian had no intention of racing the car, he also specified racing features inside, including exposed fuses and an internal cut-off switch, to make the cabin look businesslike and ready for action, despite the luxurious, blue leather upholstery.

The driving position is perfect and the seats are comfortable, but, with two of us onboard and the hardtop in place, the interior is a little claustrophobic.

I press the starter button in the middle of the dash and the 4.2-litre churns into life, before settling down into the XK engine’s familiar meaty thrum. The straight-six was fully rebuilt and uprated during the transformation to Lightweight spec; it now boasts triple Webers and a five-speed gearbox instead of the original four-speeder. While some might baulk at this more-modern addition, it does mean I am able to find first gear easily and, with its surprisingly light clutch, I don’t need to be successful Lightweight E-type racer Roy Salvadori to get the car moving.

I am immediately impressed by the responsiveness of the engine and its huge amounts of torque: the straight-six rewards me with a strong, sudden burst of acceleration that I am able to maximise thanks to the gears slotting into place like keys in a lock. With tractor levels of torque, changing down isn’t always necessary, so when I exit a corner in third, or even fourth, the engine picks up speed with a surprising keenness.

The steering, through the large wood- rimmed wheel, feels precise and perfectly weighted. That, combined with dampers tuned to give little to no body roll, allows me to nail the throttle out of a bend and slice accurately through the corner, despite the wet, greasy conditions on the day of the photoshoot. The car never feels anything other than perfectly balanced, all four tyres gripping limpet-like to the tarmac, while the brakes are sharp, responsive and progressive.

To me, the real joy of this car isn’t how it looks, it’s how easy it is to drive quickly, how forgiving it is at the limit.

It’s now for sale through E-Type UK on behalf of its current owner, who is looking to downsize his own Jaguar collection, and whoever eventually buys this car will get a real bargain. Although it’s not known exactly how much was spent on the car’s transformation, including the purchase of the donor vehicle, it’s thought to be considerably more than the £168k asking price. It might not be a real Lightweight E-type, but in terms of character, performance and detailing, it’s very close. Brian Wilkinson was highly respected in his field and a Zealia E-type is as good as it gets.

With its performance, character and real-world value, this E-type will be just as much fun to own as a genuine Lightweight – as the fake Picasso probably was until the penny dropped.