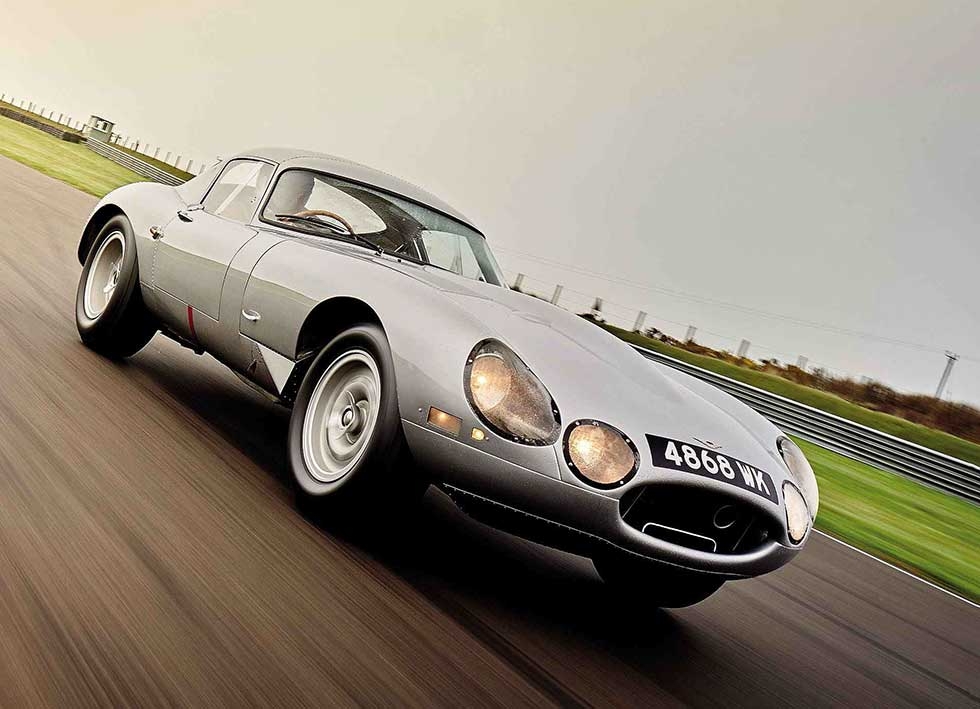 First ever test of a Jaguar legend Lindner Nöcker Jaguar. Exclusive track test of the most powerful E-type. Fastback in action. The Lindner Nöcker Low-Drag E-type underwent one of the most remarkable restorations of all time. Now Drive-My drives it… Words Glen Waddington. Photography Matthew Howell.

Five thousand and twelve hours. That’s over 200 24-hour days. Or 125 of typical 9am to 5pm working weeks. That’s how long it took to restore the bodywork of the Lindner Nöcker. Not the entire car. Just its bodywork.’ Recognise those words? Regular readers might recall editor David Lillywhite’s story of the restoration of the unique factorybuilt Jaguar E-type Low-Drag Lightweight from our test – that’s fully four years ago now. The story was about far more than simply cleaning up and reassembling old parts and we’ll come back to a brief, potted history shortly. Since that moment when all the work finally came to an end, as the owner of the Lindner Nöcker E-type and founder of Classic Motor Cars Ltd, which restored it, Peter Neumark has been busy enjoying the fruits of all that labour, taking part in such events as Chelsea Auto Legends and the Cholmondeley Pageant of Power in it, not to mention accepting the trophy for Restoration of the Year in 2011’s inaugural International Historic Motoring Awards. And now he’s invited Drive-My along to one of his customer get-togethers at Anglesey Circuit, so we can find out how it drives.

It’s one thing to see the Lindner Nöcker E-type in pictures, quite another to see it unloaded from CMC’s truck into the misty morning light at this outpost of North Wales, the Irish Sea wrapping around its undulations and the distant peaks of Snowdonia just visible through the murk. This is a Lightweight E-type so, of course, it lives up to its name thanks to its aluminium coachwork. But this car is even more special than the rest of the dozen cars Jaguar built in period: put simply, it actually looks lighter, that curvaceous fastback tail contriving to give the E-type a visual lift. The lack of bumpers and other brightwork only adds to the effect.

The Lindner Nöcker Lightweight had been brought back to life once before, when Sussex-based Jaguar specialist Lynx rebuilt it by adding replica Low Drag parts to an unused aluminium monocoque. More recently, CMC created a genuine-bodied Lightweight (it appeared in Drive-My) using the bodywork discarded when 4868 WK was reunited with its crushed panels and structure, as salvaged and impounded following the crash at Montlhéry in 1964 that killed driver Peter Lindner.

And now there’s a toolroom replica of the Lindner Nöcker Low Drag Lightweight too, a doppelganger that’s being unloaded straight after 4868 WK itself. The sight of two Low Drag E-types here in the paddock at Anglesey is remarkable, even if only one is the storied, if tragic, original as put back together after unpicking, unravelling and reforming every single smashed panel, drilling out every single spot-weld and rivet along the way. They command an awed silence as they are moved into the pitlane garage. Shortly that silence is to be shattered when they sing a ripping straight-six symphony that insists on the immediate attention of all present.

Before that happens I meet up with Peter Neumark, a man who turned his passion for a perfectly restored car into a business that has become a world standard for the preparation of concours Jaguars and one-offs such as the long-wheelbase ‘Kaizen’ E-type roadster, created for US businessman Paul Branstad.

Neumark is low-key, friendly, softly spoken and clearly very proud of his company’s achievement with this car, his eyes twinkling as he recalls the saga of reclaiming the Lindner Nöcker fastback’s roof and rear pillars, how the team had to fill in more than 1000 holes after all the rivets had been drilled out, and how CMC had no choice other than to invest in a high-current spot-welder capable of replicating Jaguar’s original work with the aluminium monocoque. ‘Our craftsmen managed to save more than 90% of the original body from the tangled shell that entered our workshop,’ he says.

Of course, such was the haste required in preparing the car with its new low-drag bodywork for Le Mans in 1964 – Peter Nöcker shared the drive, the car having been entered by German Jaguar importer Peter Lindner – that its designer, Malcolm Sayer, had been forced to resort to riveting the panels in the first place. Still, that was common aeronautical practice, and aerodynamicist Sayer’s background was with the bristol Aeroplane Company. The standard E-type owed much of its styling and construction methods to Sayer’s expertise with aircraft. A further piece of aeronautical influence is in the shape of 4868 WK’s slide throttles: it’s the only Lightweight to have been so fitted, and is therefore now the only Lightweight that qualifies for a Historic Technical Passport allowing it to race with them in place. They act on Lucas mechanical fuel injection and help access a full 344bhp – this is the most powerful of all the Lightweight E-types (an output of 295bhp was more common), and also the only one of them to be fitted with a cast iron engine block.

That’s significant. This car was built, like every other Lightweight E-type, with an alloy block. However, running with this exalted power output, it was prone to blowing head gaskets, which probably explains why it was entered in the ill-fated Montlhéry race with the iron block. Its discovery certainly surprised the CMC team, who’d been expecting an alloy block and undertook further research to confirm that the cast iron one was correct.

It’s time To don the racing helmet. I insinuate myself through the tiny passenger door and settle in next to Peter Neumark. He gradually runs 4868 WK up to speed, allowing temperatures – oil, water, transmission, brakes, tyres – to climb gradually as the rain continues to fall. He’s a smooth, accurate and patient driver, though soon the E-type is using more and more track and it’s clear that the rear wheels are helping in corners as much as the fronts.

My turn comes after surprisingly few laps, Neumark happy to hand over the keys to his priceless machine. I make my way around the car and settle into the hot-seat. It feels more familiar in here than it looks from outside, like any E-type pared back for competition, with the same dash though a much more pronounced rake to the wraparound screen.

Famously, Neumark demanded that the leather be lightly distressed so that the car felt its age. It doesn’t feel over-restored in any respect, instead having mellowed through demanding yet sympathetic use. The gearshift is straightforward, precise yet not heavy, pedal actions are consistent, the throttle sensitive yet completely linear in action. I also drove Jaguar’s Continuation Lightweights during 2015, in both carburettored and fuel-injected format, finding the injected car the easier of the two despite its all-or-nothing nature. Here, perhaps thanks to the slide throttles, there feels to be greater modulation available; not that you’d feather the accelerator as such, but more that you can afford to be circumspect as you apply power on the wet circuit without detriment to the flow of motive force. And that’s important when you’re driving a car as valuable as this one in these rainy conditions.

The steering is a delight, with no deadness at the centre yet consistent weighting as you apply lock via the beautiful wood-rim wheel. You can feel the weight transfer through the car as it settles into the corners, gradually leaning on the back and allowing the car to continue through neutrally or with as much tail-attitude as you prefer to allow. Understeer isn’t really on the menu unless you get things wrong.

This is a tactile car, with fizzing feedback offered via the aluminium gearknob and the sense of calipers pinching discs as you step on the middle pedal. Then there’s the noise, a glorious burble from under the bonnet accompanied by a rasp from the exhausts, overlaying the shriek of racing gears. It’s probably the most enjoyable dynamic aspect of the whole car, and it’s something that Peter Neumark gets to share with everybody at the circuit – no matter who is behind the wheel. And my turn is over all too soon. still, I can’t really blame the Lindner nöcker’s owner. not after all the effort that went into it.