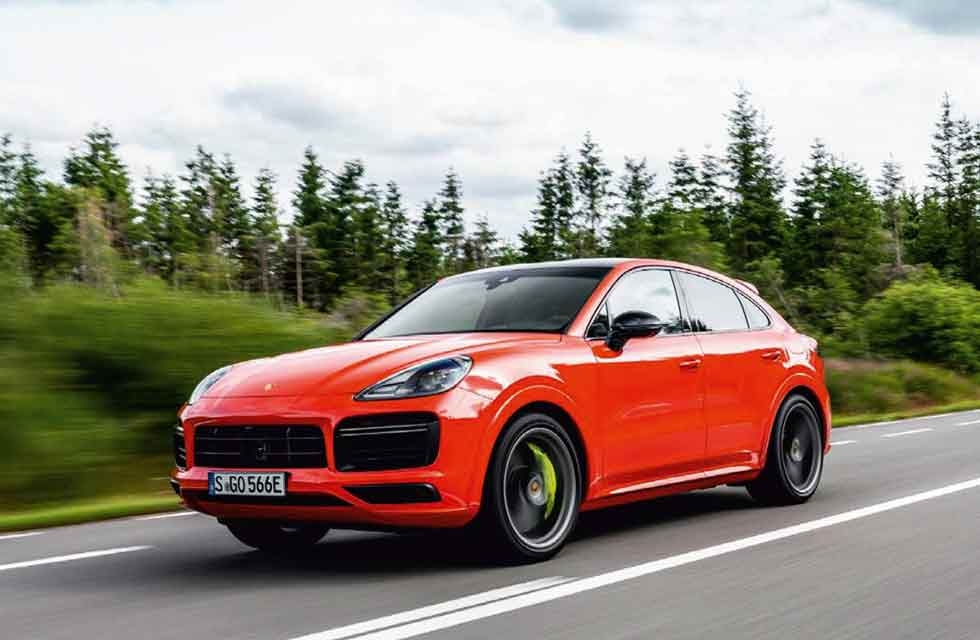 The flagship Cayenne now sports hybrid technology and, in Coupé form, may just be the most desirable iteration yet.

Leaving the car park in E-power mode, there is no telling this is the pinnacle Porsche SUV and the fastest production Cayenne ever. The 100 kW/ 400 N.m electric motor is providing near-silent propulsion as we navigate the congested roads in Düsseldorf. Even turning onto the motorway and increasing the speed to 75mph does not awaken the fearsome 4,0-litre V8 twin-turbo-petrol.

Three diagonal lines on a signpost indicate an unrestricted stretch of the autobahn and my fingers instinctively spin the drive-mode selector to sport plus before pressing the accelerator to the floor. The Cayenne’s persona changes in a split-second from nature-loving to fire-breathing and the V8’s bellow announces serious acceleration in no uncertain terms. With total system outputs of 500 kW and 900 N.m, the digital speedo is given a proper workout: 160, 220, 250 and eventually 275 km/h flash by before traffic conditions force sensibility to return. This is a seriously quick vehicle with a credible top speed of just under 300 km/h.

The Cayenne Coupé is based on the third generation of the brand’s luxury SUV released last year and employs the successful MLB platform used extensively throughout the Volkswagen Group. With the Coupé, Porsche is aiming for a niche within a niche, a trend started by another German firm based in Munich. Many other manufacturers are now following suit and a recent example is an extended family member in the form of the Audi Q8 that’s based on the Q7. Whereas the Audi is more focused on luxury and comfort, the Cayenne targets performance in line with Porsche’s values.

From the outside, the designers have done a remarkable job of adding even more sportiness and attitude to the Cayenne. The Coupé roofline mimics that of the 911 and ends in a clean, elegant rear quarter with the now trademark horizontal-brakelamp styling line. Rear headroom is not as pinched as you might expect (the rear bench is lower than in the standard version) and my 1,92-metre frame easily fitted during the sit-behind-self test. There is an air of quality inside the cabin and the traditional analogue rev counter is still in its rightful central position ahead of the driver. The 12-inch touchscreen is crystal clear and touch-sensitive buttons on the piano-black centre console add sophistication. The glass panoramic roof is standard and floods the cabin with light. The Cayenne features similar plug-in-hybrid technology as found in the Panamera Turbo S E-hybrid. This means the 100 kW electric motor is housed between the engine and eight-speed transmission.

A 14 kWh battery pack delivers 40 km of all-electric motoring up to a speed of 135 km/h. Charging times range from 2,4 hours with a three-phase connection (7,2 kW) to around six hours employing a standard domestic wall socket (2,2 kW). It offers several driving modes, including hybrid to optimise the balance between electric and petrol power, or E-power for all-electric motoring. In this mode, the accelerator has a notch in its travel to denote the maximum acceleration under electric power before the internal-combustion engine kicks in. Claimed fuel consumption on the conservative NEDC procedure is 3,9 L/100 km and 19,6 kWh/100 km electricity. While having fun on the autobahn, that figure understandably jumped to 17,0 L/100 km.

When it comes to styling and performance, Porsche has created the most impressive Cayenne to date. It offers blistering straightline performance and more dynamic appeal than an SUV has the right to (aided by 48 V roll-bar stabilisation). Combine that with plug-in hybrid efficiency and you have one vehicle that can truly do it all. The only potential stumbling block is whether a remortgage option is available on my house.

03 40 km of electric-only range is possible in E-power mode.