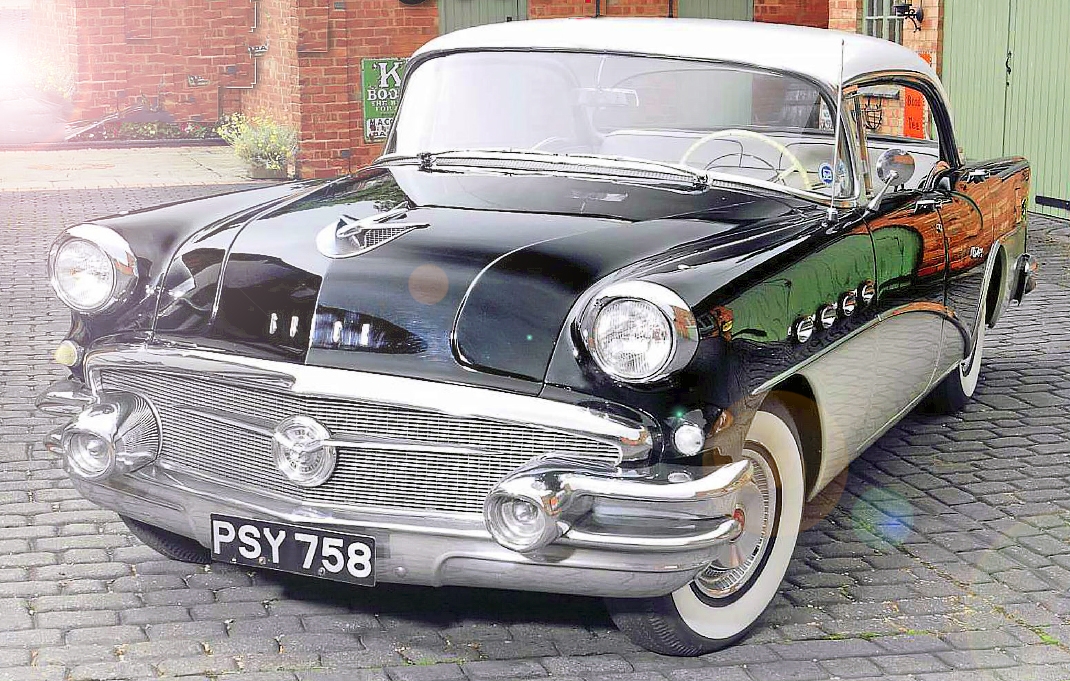 Nick Warner admits he bought this 1956 Buick Century on awhim, but in 16 years he’s never once regretted it… Have you ever gone into a shop and come out with a handful of items that you didn’t intend to buy, but somehow couldn’t resist? If so you can probably relate to Nick Warner and this Buick. Nick went to an auction in Donington back in 1996 and bought this 1956 Buick for no other reason than that he liked the car. “I buy and sell antique furniture for a living,” says Nick, “so I’m familiar with bidding at auctions and I’ve always been into cars, but there was no earthly reason for me to have bought this car 16 years ago, I just did it.”

The Buick didn’t reach its reserve at the auction but the following day Nick tracked down the owner and after striking a deal the Buick arrived on a lorry outside Nick’s house later that week. “There was a moment of ‘what have a I done?’ when it turned up,” laughs Nick. “In the Seventies I did some rally cross and I’ve always owned old British cars, mainly Austin 7s, but I’d never had any interest in American cars, I knew nothing about them at all. I got into it pretty quickly though!”

Nick had bought himself a 1956 Buick Century, a Riviera model with the pillar-less four door body and a 322cu in V8. “They called it the ‘banker’s hot rod’,” says Nick, “for the combination of the bigger engine in a small bodyshell. Although first impressions were that it was very big, especially when I drove it.”

The model name Century came about in the mid Thirties. The great depression was hitting Buick hard so Harlow H Curtice, president of AC Spark Plug, was brought in to turn the company around. Knowing GM design chief Harley Earl only ever drove Cadillac’s, Curtice challenged Earl to “design me a Buick you would like to own”. When Earl came up with Buick’s first production car capable of reaching a speed of 100mph the division needed to come up with a suitable model name.

Supposedly one of the Buick executives had returned from a recent trip to the United Kingdom and explained that the British referred to driving at 100mph as ‘doing the century’. The other executives liked the Century name and it stuck. Just as well, the Buick ‘Ton Up’ doesn’t quite have the same ring to it…

Launched in 1936 the Century survived until 1942, then didn’t return to the Buick line again until 1954. At that point Buick was solidly sat in the number four sales spot it had occupied since 1949, behind Plymouth, Chevrolet and top seller Ford. The Buick Special was the big seller, and one of the cheapest ways to get a Buick on your driveway – something that all the fashion conscious middle classes aspired to. The Century was introduced as a range of four models including a wagon. It comprised the 60 series, above the Special 40 and the Super 50 but below the top dog 70 series Roadmasters.

The Century was instantly popular and one customer base which loved them was the California Highway Patrol. It placed a huge fleet order for Century two-door sedans in ’55 – it was too easy for criminals to jump out of a four door. Buick got great publicity through the TV series ‘Highway Patrol’, where Broderick Crawford drove a two-door Century sedan during the first season.

‘When better automobiles are built, Buick will build them’ said the advertising and Buick was indeed putting a lot of effort into making their cars comfortable and durable. Redesigned interiors for 1956 had new dashboards with ‘glare-proof’ instrument covers and better colour co-ordination, no doubt responding to the news that women played a big role in the colour choices of the new family car.

The Special and this Century rode on the smaller 122in wheelbase, while larger Super and Roadmaster shared a 127in frame. For ’56 GM offered the ‘best Buick yet’. The Century had a higher trim level, and again shared the more powerful 255bhp, 322cu in ‘Nailhead’ ohv V8 engine with the ‘senior’ Buicks. It really was America’s biggest per-horsepower-dollar buy and you could ‘command a Century for just a step over Buick’s lowest prices.’ In practical terms prices started around $2530 and rose to $3600 the more toys and glitz you wanted. 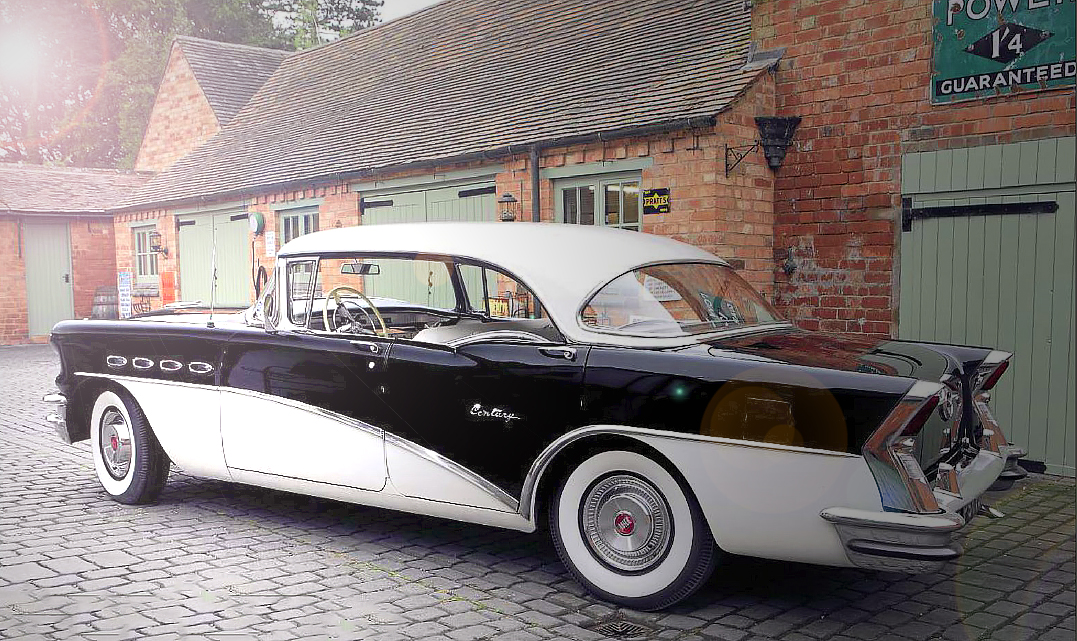 The Riviera was Buick’s term for a pillar-less coupe, but a pillar-less four door hardtop joined the range in mid ’55 on the junior (Century and Special) Buicks only. Oldsmobile also got one of its own, but the rest of the industry was caught napping – it took the next model year for the other CM lines and Ford to catch up. The pillar- less sedan combined the look and prestige of a hardtop coupe, with the convenience of a four door sedan. Having no В-post created quite a light, airy feel especially with the windows down. Having large families was popular at the time and with air conditioning relatively rare the breeze was welcome. By ’56 you could buy a Riveria in every Buick model.

The four door hardtops may have looked fantastic, but customers reported that the windows went out of alignment causing wind noise and water leaks. After a few years of wear bodies became squeaky and flexed. One owner said: “At 65-70mph the noise is deafening and the rear seat passengers are in a perpetual hurricane.” To be fair it was no worse than the back of a convertible at such speeds, but Buick owners were a rather refined bunch.

Buick’s four speed Hydramatic tended to change gear rather abruptly, so Buick devised its smoothest ever gearbox, the Variable Pitch Dynaflow which came as standard on everything but the Special. For ’56 it came with a second stator – a set of propeller-like internal blades – and was designed for better performance and fuel economy. Effectively a one-speed automatic it was certainly smooth, but the Dynaflow still sapped horsepower and massively increased fuel consumption – although with gas at 25 cents a gallon who really cared? Worse was the nickname ‘Dyna-flush’ among mechanics familiar with its unfortunate habit of blowing a 50c seal and dumping the transmission fluid over the highway. Incidentally if you’re ever having trouble finding a turbine ring for a Dynaflow’s torque converter it became an Appalachian mountain music tradition to make a body for a banjo out of them. The trend was made popular by folk musician Janes Cottrell. Ain’t music history wonderful?

The Century continued to remain in Buick’s performance line-up with the engine power rising from 200bhp in 1954 to 236bhp in 1955, 255 in 1956 and in 1957 and 1958 it topped out at 300bhp from a bored-out 364cu in engine. These were the final model years for the full-sized Century. The range boasted GM’s only pillar-less four door station wagon in 1957-58; the Century Caballero. Unfortunately sales weren’t as high as expected and the expensive to build Caballero was dropped.

For 1959 the Century was renamed the Invicta. The Century model returned in 1973 replacing the Skylark on Buick’s mid-size sedans, wagons, and some coupes. The name appeared again from 1978 to 2005 when the Century was replaced by the LaCrosse.

Nick’s car was one of 55,973 such examples to roll off the Flint, Michigan, production line in ’56 which was some 900 more than in 1955. Overall model year production was 572,024. Nick’s has power-steering and power-brakes, both of which were extra cost options. It also has the ‘Safety Group Accessories’ that included reversing lights, soft padded dashboard cover of ‘tailored cordaveen on soft foam rubber’ and a glare-proof mirror.

It appears the Buick has lived a fairly sheltered life. According to a chap Nick met at a show who introduced himself as the president of the Buick Club, the Buick was imported and sold through Lendrum and Hartman’s (the Buick and Cadillac importer) London showroom.

“Apparently all the cars they imported were black and white,” says Nick. “The chap told me the original owner of my Buick was an American who had a chauffeur business in London and wanted to be driven around Europe, so bought this car and after they’d done the trip he gave the Buick to his driver. I don’t know how true that is but a couple of different people have now told me that. If you look in the back the seat on the offside is more worn where someone has sat, and there are some chrome blanks in the front wings where it’s possible there were flags or something like that mounted.”

Apart from painting the lower half white and replacing a brake cylinder the car has not needed a thing doing in 16 years – talk about a lucky buy! Now the Buick lives a quiet life, usually only coming out on dry days. “I think it looks stunning, but it’s not pristine,” says Nick, “it’s not a show car, it’s one I can park somewhere and leave it.” And has Nick ever been tempted by any other impulse buys? “I do fancy a two-door ’57 Buick, but I won’t sell this one, I’ve never had a moment’s regret with it.