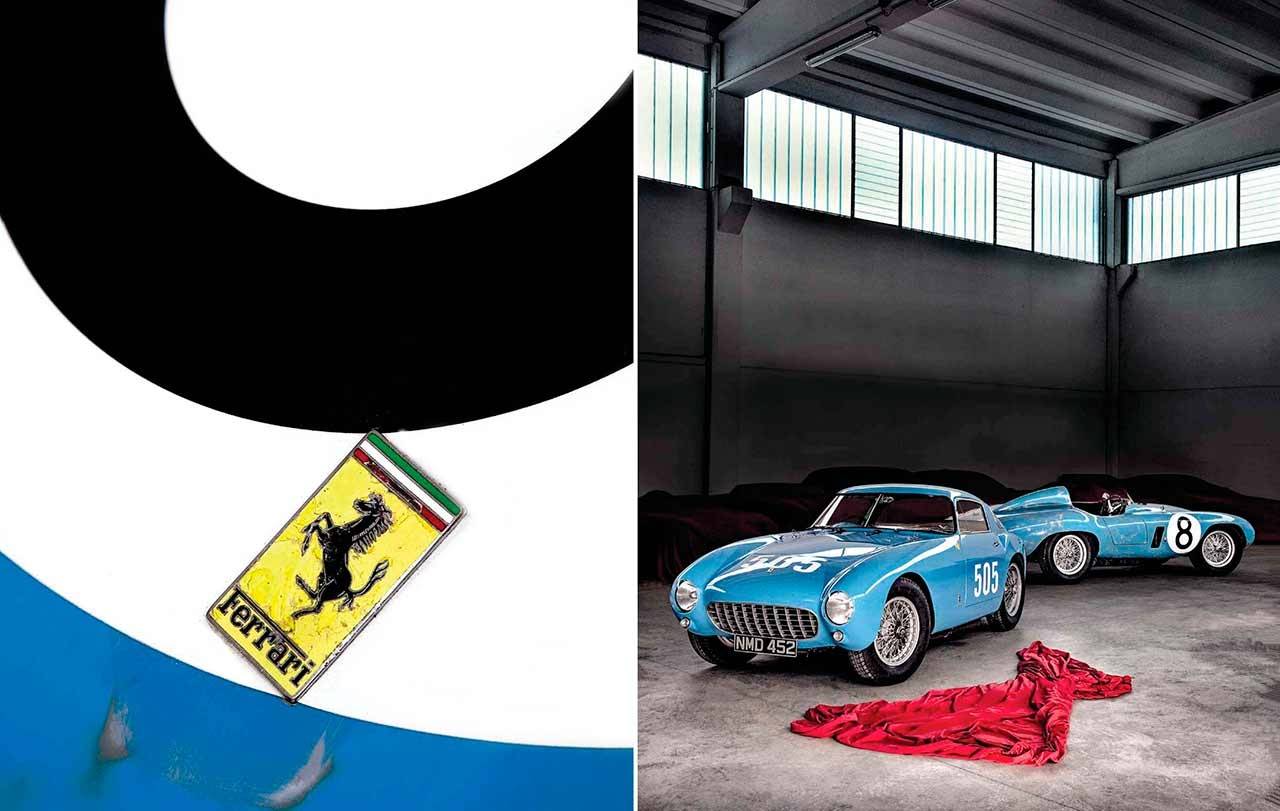 Ferrari 500 4 Tissimo. ’50s Mondial spider & berlinetta driven. Proof that not all Ferraris true greats were V12s. When it came to delivering the goods, a Ferrari didn’t always have to have a V12. Meet the four-cylinder legend that is the 500 Mondial. Words Dale Drinnon. Photography Martyn Goddard.

As a pithy quote with which to foster a legacy, from one of motoring’s masters of the art, it ranks among Enzo Ferrari’s finest. His youthful exposure in 1919 to the groundbreaking Packard V12 left such an impression, he famously said: ‘From that moment I married the 12-cylinder engine, and I never divorced it.’

On closer consideration, though, you have to hope the 12-cylinder engine negotiated an awesome pre-nup, because Enzo cheated on it with virtually every other configuration going, and where it really counted too, in the early race cars and right from the honeymoon. Nor would you expect anything else. He was a racer, and any true racer would put his own granny on a street comer if it helped win races, and as a firm believer in the design primacy of horsepower, Ferrari wasn’t above placing sentiment on hold to grab a few extra bhp.

His cars consequently dabbled at one time or another in all the common combinations of pistons and arrangements. In 1955 he even had engineer Aurelio Lampredi whip-up a 2.5-litre twin, which reportedly withered on the vine after making marginal power and attempting to vibrate the test bench out of the shop door.

But the most illustrious ‘alternative’ powerplant of Ferrari’s legend-forming 1950s was the ordinary garden variety inline-four. Impressed with the grunt out of slow comers enjoyed by some of his four-banger F2 competition, and intrigued by the possibilities of decreased weight, complexity and fuel consumption, Ferrari was swayed towards that particular layout as early as 1950.

By the spring of ‘1951, Lampredi had a prototype running: a DOHC, two-valve, twin-plug motor, constructed in the same exotic, fixed-head monobloc manner as his big V12s. Tested in both 2.0- and 2.5-litre sizes, it fulfilled its promise virtually from the initial fire-up. The 2.0-litre variety gave a 28% improvement in power-to-weight ratio over the existing 2.0-litre Gioacchino Colombo-designed V12, plus a 9% increase in bhp-per-litre, with a whopping 65% fewer moving parts. It weighed about 40kg less into the bargain.

Raced first as a 2.5 that September at the Bari Grand Prix, driven by Piero Taruffi, it finished third straight out of the box against a respectable FI field of Alfas, Masers, Gordinis and VI2 Ferraris. When the World Championship moved to a 2.0-litre Formula 2 spec in 1952, that crafty old smoothie Enzo was laughing all the way to the podium.

Over the next two seasons the four-cylinder Type 500 won 14 of the 15 championship GPs available (each year’s Indy 500, then in essence a points-paying GP by courtesy, not included), giving driver Alberto Ascari and constructor Enzo back-to-back world titles. They were Ferrari’s first championships, and you have to love the irony of the marque that would become synonymous with the noble, thoroughbred V12 snatching its first laurels by stepping down to a humble four-cylinder.

The ‘little’ engine worked so well, in fact, that Ferrari truly started warming to it. In anticipation of a coming 2.5-litre World Championship F1, monopostos of that displacement continued in development and, in the summer of 1953, a pair of four-cylinder sports racers saw limited service, namely the 2.5-litre Type 625TF and the 2.9 Type 735S. In the December, Ferrari furthermore wowed the form-makers by taking second place outright in the 12 Hours of Casablanca, Ascari and Villoresi beating every big-bore car except a Ferrari 4.5, with a brand new Scaglietti-bodied spider using a detuned version of the invincible 2.0-litre GP engine.

It was called, in honour of those world titles, the Type 500 Mondial, and Ferrari saw it as a worthy customer-car answer to Maserati in the 2.0-litre sports category’, a view justified when gentleman amateur Vittorio Marzotto drove one to runner-up in the following spring’s Mille Miglia, behind the Lancia D24 and ahead of a Maserati A6GCS. Weighing only some 750kg and making roughly 160-170 horses, it was a handy tool when quick and nimble counted, and raced in sufficient numbers to contribute toward Ferrari’s 1954 World Sports Car Championship.

That the model proved attractive to privateers is evidenced by the French racing blue worn by both of our subject examples; they each started their competition lives with a strong French connection. In the case of chassis 0452 MD, one of only two Mondials bodied by Pinin Farina as closed berlinettas (although several Pinin Farina spiders were produced), that was in the 1954 Tour de France, crewed by French long-distance specialist Leon Coulibeuf and co-driver Robert Aumaitre.

Unfortunately, the result was a DNF, as frankly were most of the car’s few outings, but it had the distinction of completing the Mille Miglia twice, finishing outside the time limit in 1956, and in the fateful 1957 event coming 59th overall. There is also some indication that this may be the Mondial used in the ‘1955 Targa Florio (another DNF) by Franco Cortese, famous for scoring the Ferrari brand’s first victory, at the 1947 GP of Rome.

Not long after the ‘1957 Mille Miglia, 0452 was sold to the USA, going through the usual sequence of private ownership, historic racing, restoration and concours before eventually returning to Europe in 1988. It has since appeared on the Euro-concours circuit as well, and did the 2012 Mille Miglia Storica.

Cosmetically the car is a knock-out, with little to suggest the restoration was more than 30 years ago, and the combination of French blue with tan leather suits it perfectly. You wonder about the impeccably crafted carpets when you crawl into the cockpit, but maybe they were added to dampen the noise levels inside that otherwise bare-bones echo chamber to something less than lethal. One suspects the Tour de France DNF happened when driver Coulibeuf couldn’t hear navigator Aumaitre screaming ‘Hairpin! Hairpin!!’

Or perhaps M Coulibeuf simply couldn’t get the gearbox out of first. This is the most difficult, notchy, grindy transmission yours truly has ever experienced. That includes quite a few other non-synchro transmissions, several of them rear-mounted like this one. The clutch is also tetchy, and I never get comfortable with either; even more embarrassing, Tommaso Gelmini of GPS Classic, who looks after the car, has no troubles with it at all. My only consolation is remembering a racer of much greater seat time in ’50s Italian competition machinery than I have once telling me this is why he prefers Maseratis.

On the other hand, the open car and I get along like a house on fire. Dressed in the Scaglietti panels used by about half the 31 Mon dials, chassis 0564 MD is a Series 2, which mostly means it was built in the final 1955 group of cars, with oval instead of round frame tubes, front coils instead of a transverse leaf, and a five-speed transaxle.

Which could account for the far easier shifting – but so could the car’s more active recent history. Used in multiple Mille Miglias since the millennium, as well as the Ferrari Maserati Historic Challenge, it has the feel of a well-sorted race car, not a museum piece. Having said that, 0564 spent a good part of its life as exactly that, a museum piece, and not for the most obvious of reasons.

The car’s early days, however, were in French circumstances hardly different from the Berlinetta. Its period debut in May 1955 was with French owner Yves Dupont for the short-lived 12 Hours of Hyeres on the Cote d’Azur, and yes, it was a DNF, but the next month it took third at Imola for Harry Schell; its period finale was that August, side-swiping out of the Liege Rally and being returned to Ferrari for repairs. Dupont then fell out with Enzo and refused to pay the bill.

In Dupont’s defence, he definitely wasn’t the only customer ever to express displeasure with Enzo Ferrari’s service policies (Ferruccio Lamborghini springs instantly to mind) but Ferrari nonetheless seized the car, later spraying a coat of Italian red atop the French blue and loaning it to the Autodromo Monza museum for display. It stayed there for 20 years, until purchased by French collector Jean-Francois du Montant, who paid Ferrari not only the original repair amount but also a whacking great two-decade storage charge.

Fast-forward to 2008 and, after its own cycle of historic races, concours and ownership changes, 0564 reached Tommaso at GPS for a restoration commissioned by the same client for whom GPS maintains the Berlinetta. When traces of blue immediately turned up under the red topcoat, Tommaso knew something interesting was happening, and the car’s unique back story, hazy behind the cloud of confused or non-existent records typical of cottage-industry carmaking, surfaced.

And so the restoration was limited to mechanicals; the original blue finish painted with a clear layer for preservation. It remains in that state still, under the care of new owner Kevin Wood, and visitors to last autumn’s prestigious Salon Prive concours in London will have seen it sitting poised amid the spit and polish, with the quiet dignity of a slightly faded da Vinci in an original timeworn frame.

The dignity is naturally a lot less quiet when the Lampredi 2.0-litre comes to life; without a naked metal roof bouncing the ruckus directly back into your head, however, the sound is not a punishment, it’s a celebration and, like all good Italian fours, it somehow conveys a potential to punch far above its weight. Lots of gear whine is involved too, from every direction, and very pleasantly so. It reminds you that this is a real race car, and not something re-engineered from the street.

On a cold day like this, the transaxle takes a few minutes to warm up but, once it does, I’m able to make clean upshifts with only a rhythmic hesitation through the neutral gate and a snap into the next ratio; downshifts are just a matter of properly timing your double-declutches. The steering is light and positive, the brakes none too crisp (to be fair, it’s pretty chilly out here) but they stop the car straight and short. The driving position is to my size and taste, and the car feels as lively, responsive and balanced as a proper sports car should.

Enzo Ferrari would, of course, go on to other four-cylinder racers, most notably the 750 Monza and the 500 Testa Rossa, and Aurelio Lampredi would later create an even more successful twin-cam four, for Fiat, used in countless World Rally winners. With the Mondial, though, they hit one of those golden moments when everything comes together just right and, when that happens, the number of cylinders involved is merely coincidence.

“Cosmetically the car is a knock-out, with little to suggest the restoration was more than 30 years ago”