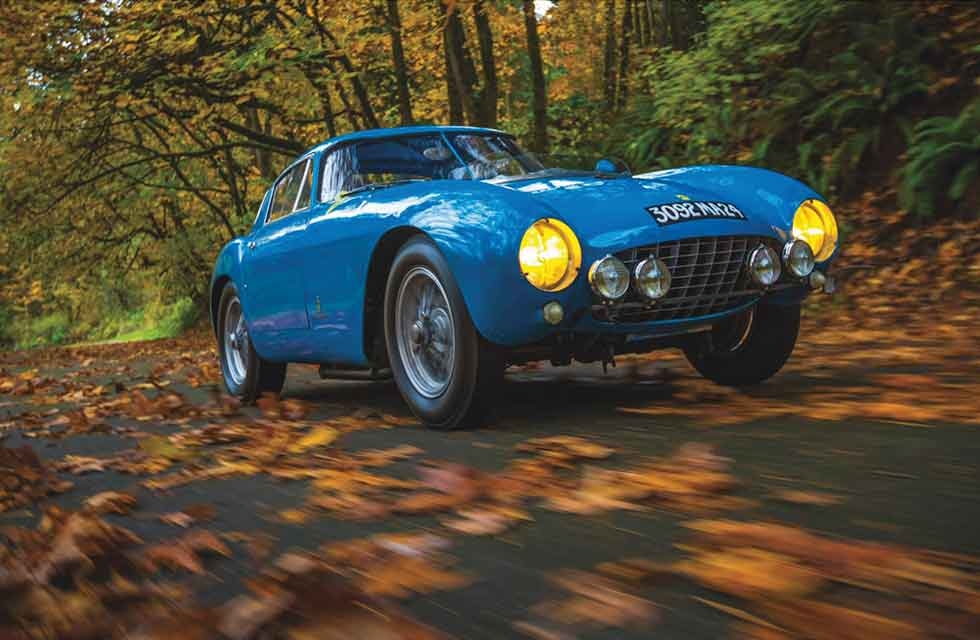 Few cars have been preserved as well as this ultra-rare Ferrari 500 Mondial. Massimo Delbo tells an extraordinary 65-year tale that illustrates the early genius of Enzo himself. Photography Evan Klein.

Big on rarity and brio, small on cylinder count

This is a story as much about an engine as about a car. In the 1950s, Ferrari was pursuing a parallel path in both racing and road cars, and while today the company is most famous for its V12s, in the early years of that decade engineering mastermind Aurelio Lampredi came up with a lighter, simpler motor that had just four huge cylinders. The antithesis of the V12’s aristocratic sophistication, it was still a potent engine – and it delivered a lot of torque. It won a Formula 1 World Championship, it powered sports-racing cars, and it found its way into some rare and special road cars. The 500 Mondial you see here, built in 1954 and named for that championship victory, is one of the most special of all. First, though, some context.

The early 1950s was an era of intense technological development, when government-backed wartime research could finally benefit civilians. More highly skilled technicians than ever before were available to advance metallurgy, fuel, aerodynamics and materials, creating the perfect environment for engineering and design progress. Nowhere was this more evident than in the automotive world, especially in racing. The enthusiasm and joy of the war’s survivors was key.

During those years they had dreamed of something better, and now they could make those dreams a reality. Back in the 1950s there was none of the increasing standardisation and regulation in every area of manufacturing that constricts us today, and in the world of racing cars what had been enough only yesterday suddenly wasn’t any more.

In the little, mostly agricultural, Italian village of Maranello, Enzo Ferrari was establishing his young firm as the one to beat in the racing car world. As well as building pure single-seat racing cars, he was making wonderful roadgoing thoroughbreds capable both of winning races and of being driven around by the very wealthy. Technically, the differences between the two types were minimal, and a constant flow of new engines, chassis and technical specifications was daily business. Racing regulations were not so tight then, but new parameters were applied almost every year. All of which forced small manufacturers such as Ferrari to invent new ways of using leftover parts and to reinvent older solutions.

The new Formula 1 Championship was established in 1950, with an initial engine capacity limit of 4.5 litres normally aspirated, or 1.5 litres with forced induction. Alfa Romeo won both the 1950 and 1951 titles with supercharged cars, then withdrew when regulations changed. For the 1952 and 1953 seasons, the Formula 1 cars would race alongside the Formula 2 cars, meaning a maximum engine capacity of 2.0 litres – or 750ccwith a supercharger. Ferrari’s engineers, led by Lampredi (then still only in his mid-30s), were kept very busy indeed. These new rules were supposed to last for two years, and Enzo Ferrari was smart enough to spot a new opportunity for his racing department. Far removed from the V12s that had made the scuderia famous, it was the creation of a lighter twin-cam four-cylinder. Although Ferrari was still a small company, making fewer than 100 cars per year, it was running an incredible range of engines. There were units of four and 12 cylinders, from 1.5 litres up to 4.5 litres, but the proliferation proved a success. Alberto Ascari drove Ferrari’s Tipo 500 single-seater F2 car, with the 2.0-litre four-cylinder, to victory in seven consecutive World Championship races, helping him to secure two world titles: one for him, plus Ferrari’s first.

‘THERE WAS HIGH POST-RACE DRAMA: THE MONDIAL WAS IMMEDIATELY SEIZED BY FRENCH CUSTOMS’

Lampredi’s engine, with that plentiful torque and strong low-down response, also proved very successful in sports racing cars right from its debut on 20 December 1953 at the Casablanca 12 Hours in Morocco. There, Ascari and Gigi Villoresi finished second behind a V12-powered Ferrari 375 MM. Their new car, equipped with many of the 3.0-litre cars’ components, was called 500 Mondial. The number indicated the capacity of each cylinder, while the name celebrated the first Formula 1 world title and the string of international victories already achieved by the engine.

The 500 Mondial was intended for gentleman drivers such as Vittorio Marzotto, the most senior of four racing brothers, who finished second in May 1954’s Mille Miglia. His 500 Mondial Spyder prototype was one of the six 500 Mondials bodied by Scaglietti. Of the early Tipo 501 production cars, known today as Series I, 22 were built in 1954 before the adoption of a new engine block. All had right-hand drive, most wore aggressively elegant open coachwork by Pinin Farina. A further 14 were built in the style of the bruising four-cylinder 750Monza (3.0 litres, 750cc for each cylinder).

The famous carrozzeria, soon to be appointed as Ferrari’s sole body supplier, clothed only twoTipo 501 chassis as closed berlinettas: chassis numbers 0422MD and 0452MD, both of which were entered in September 1954’s Tour de France Automobile. The gorgeous French Racing Blue car on these pages is #0422, complete with that matching number on its 1985cc, 170bhp Tipo 110 engine.

According to the car’s Foglio di Montaggio, chassis 0422MD was completed on 4 June 1954, overseen by technician Franchini. After the reported fixing of some oil leaks it was shipped through the Casablanca agent, André Vanon of Cogemati SA, to its first owner, Mario Dustaritz, a French citizen and Tour de France veteran living in Morocco. On delivery it was registered as 3092 MA 24 (MA for Maroc, or Morocco, a French protectorate until 1956) and immediately prepared for that year’s Tour de France with windscreen washers and a battery of four driving lights.

For this fourth edition of the gruelling Tour, starting in Nice on 3 September and finishing there nine days later, the Ferrari was entered in class B of the series production and GT category. It wore racing number 233 – and was fitted with extra locks to secure it from theft! Owner Dustaritz paired himself with experienced Venezuelan driver Lino Fayen, but despite their efforts and their new car the pair failed to finish the 6000km race. The three other 500 Mondials entered in the competition (Spyder Pinin Farina #0424MD and #0458MD, and Berlinetta Pinin Farina #0452MD) also retired, while victory went to the French duo of Jacques Pollet and Hubert Gauthier in a 2.5-litre Gordini T15S.

Before retiring, the Dustaritz car drove the Le Mans racetrack stint on day two. A black-and-white picture shows #0422 just ahead of its sister car, #0452; it was most likely the last time the cars were seen together. But there was high post-race drama: the Mondial was immediately seized by French customs and, although details are scarce, it seems that André Vanon of Cogemati SA took drastic action in an attempt to recover a missing payment from Dustaritz.

What we do know is that the Ferrari was sold, by Vanon, in 1955. The new owner was French gentleman driver Jean Prosper Piger, already a nascent classic-car collector with wonderful pre-war cars stored at his Château de Margeaix home in Vorey sur Loire. Re-registered 746BZ43, the Mondial remained in Piger’s ownership for the next 47 years, sharing his château with pre-war Bugattis and other Ferraris. He proved to be the perfect custodian; the 500 Mondial was always well protected, driven sparingly but kept active, never fully repainted or restored in any way. It was the perfect, running example of a collector’s time-warp dream.

In 2002 a well-known Ferrari collector became its third owner via an American agent. On its arrival in the USA, all the mechanical parts were carefully disassembled, cleaned and replaced only where absolutely necessary. Any leaky or perished hoses and rubber bushings were changed, but nothing was painted, plated or otherwise altered from the condition in which the car was received. Some engine works have been carried out since, but nothing beyond a major service.

In January 2003, #0422MD reappeared on the classic car scene, making quite an impression at the Cavallino Classic in Florida’s Palm Beach. It won the Coppa 4 Cilindri, the coveted Preservation Cup and a Silver class trophy. In April 2004 it made its second concours outing, at the Ferrari Club of America National Meeting in Sebring, and again was awarded the Silver class trophy.

After a few years out of the pubic gaze, in August 2012 the Mondial showed up at the Pebble Beach concours in California. It completed the pre-show Tour d’Elegance on the Thursday and won the FIVA Post-War Preservation Class on the Sunday – still sporting the four Marchal driving lights installed for that fateful Tour de France.

This 500 Mondial, now pensionable at 65 years old, remains marvellously untouched. The original quality of the Italian artisans’ craftmanship has stayed intact, without the unnecessary polishing and plating of later years or the restorations that so many cars are subjected to. Even if this particular Mondial didn’t prove to be the perfect racing car, it has a great historical significance through having the same engine type that propelled Ferrari to its first Formula 1World Championship title.

That series underlined better than any other the direct link between racing and production cars of that amazing era. Enzo Ferrari took a problem – the need to reinvent an engine following new rules – and used it to develop a new market for his company. That visionary spirit lives on in this car.

THANKS TO Kidston SA (www.kidston.com), which handled the sale of the 500 Mondial.