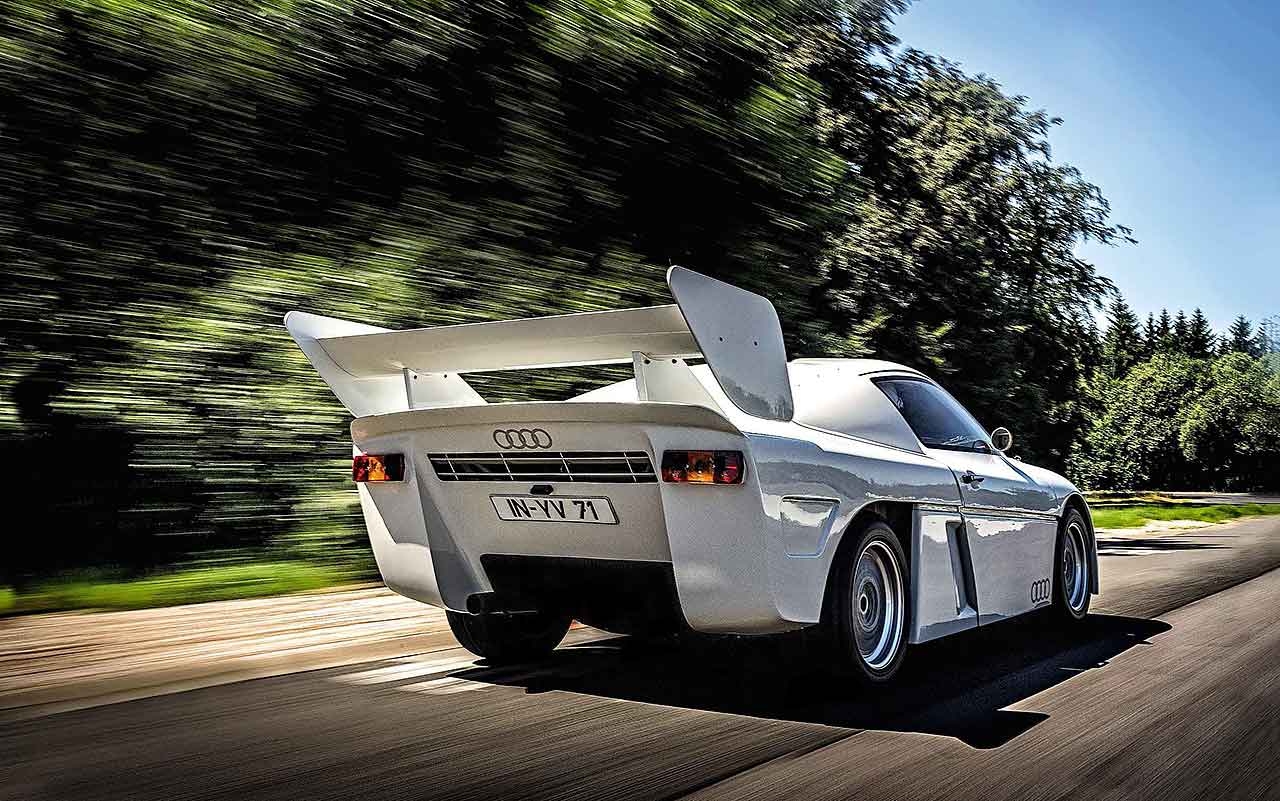 In the end, we’re told, all it took for one of rallying’s rarest and oddest creations to be restored to working order was an email, a few phone calls and three months of part-time recommissioning. Yet as we pore over the Audi RS 002 Group S rally prototype, outdoors at last after a quarter-century behind glass, it is still hard to believe that this most curious of curios can now finally move under its own steam. The RS 002’s back story is packed full of intrigue. It goes back to 1984, when Audi Sport started lobbying the firm’s management to allow development of a mid-engined Quattro – a bespoke competition car to take on the newly arrived Peugeot 205 Turbo 16 and expected future rivals from Ford, Lancia and MG.

Audi’s then-chairman Dr Ferdinand Piëch gave tacit approval for the work to commence. But since the Board was still quite fixed on the idea of the production car tiein, previously unseen levels of secrecy would be required until the mid-engined car was so fast that the management wouldn’t be able to deny it.

Sure enough, by November 1985 Audi was ready to test a mid-engined version of its Sport Quattro – we’ll call it the RS 001 – and the car quickly proved itself in back-to-back gravel tests with the bewinged S1 E2 conducted behind the Iron Curtain in Czechoslovakia. The facility at Desna was chosen because it was owned by an agricultural co-operative with close links to the ‘party’ – and, through that, the state and the secret police. Handy when you don’t want the locals sniffing around, you might say.

The car was soon deemed suitable for Walter Röhrl’s evaluation but, while he was racking up more than 100 miles of running on roads in Austria and Germany, a single spy photo emerged from the test. It caused embarrassment to Piëch and, within 48 hours of its publication, the two RS 001 prototypes were dismantled in front of his eyes, then crushed.

That should have been the end of the story, but in the early 1990s another car emerged: the RS 002. It’s said to have been built at Audi Sport’s alternative facility in Neckarsulm, not Ingolstadt, and sources suggest that the engineers behind it may not even have told Piëch what they were up to.

How, and why, did that happen? The best explanation seems to be that 002 was an in-house attempt to drum up fresh enthusiasm for going rallying with a mid-engined car. It was loosely designed around the Group S rules that were meant to follow Group B, but that was before the FIA hit the nuclear button in May 1986 in the aftermath of Henri Toivonen’s fatal crash in Corsica, and switched to the production-focused Group A rules instead.

We say loosely, because 002 is an early prototype at best. Close inspection reveals that the dashboard has been lifted not from an S1 but from an early, pre-Group B edition of the Quattro. The bodywork’s profile is more C2 Le Mans racer than Acropolis winner. The rear wing, huge in proportion to the rest of the 002’s diminutive dimensions, would have been a hoot over the jumps of Finland. The construction is patchy. It is far from the complete picture, supporting the theory that it was pieced together in clandestine fashion.

Even the engine isn’t what Audi always claimed it to be. The RS 002 has spent almost all of its life on display in a customer collection centre in Ingolstadt, sitting behind a small plaque stating that it has a six-cylinder engine with a power output of 300PS. In fact it has a familiar 2.1-litre five-cylinder powerplant from a Quattro. It’s pretty much Pikes Peak spec, in fact, which dates the 002 (or at least that bit of it) to the second half of 1985 at the earliest, and more likely some time in 1986.

It also means this one-tonne vehicle could have serious power. ‘Since the recommissioning we’ve run it up to 1.8 bar of boost pressure, at which point it is nearly undrivable, especially for demonstration runs,’ says our driver for the day, Audi Tradition engineer Thomas Bauch. ‘But the engine’s rated at up to two bar, which is about 700bhp.’

Getting the 002 mobile for Walter Röhrl and co-driver Christian Geistdorfer to conduct a couple of gentle parade runs at the Eifel Rally Festival in July was actually quite easy. The car was handed over from Audi Sport to Audi Tradition in ‘excellent condition’, according to Bauch. That five-cylinder engine is well known to the team there, while the gearbox is standard S1 E2 issue with none of the PDK quick-shifting that Audi was experimenting with. The brakes and tyres are familiar fare, too.

The biggest drama, and the reason why the parade run was in doubt until a matter of days before it was due to take place, was the ECU, because Audi Tradition didn’t have one in the right spec. It took a last-minute search through Bosch’s archive to find the few period electronics that were needed. Then Bauch and his engineers wrapped up the bits in a case they bought off eBay…

Tradition’s workshop is a feast for the eyes. Opening the garage door reveals Röhrl’s 1986 Monte Carlo Rally S1 E2 on one side (one of only 20 built), and the Auto Union Type C on the other, fresh from its run with Hans Stuck at Shelsley Walsh a couple of weeks before. In the middle sits RS 002, not as striking as the shimmering vintage racer, perhaps, but giving the S1 a run for its money on the rear wing stakes. Not many cars can do that.

The road Audi has in mind for photography is about ten minutes away from Tradition’s base, so we’re invited to climb aboard for the run out. Getting in is not entirely straightforward, as the thick rubber inserts beyond the door hinge have a nasty habit of catching the edge of the door itself and bouncing it back towards you.

Once you’ve clambered onto the surprisingly wide Recaro and pulled the door shut, again you’re struck by how rudimentary everything is. The handbrake is a lever cut through the central tunnel. There’s no sign of any sophisticated transmission controls because – this being a Quattro in reverse – there aren’t any. And with the door shut, you can still see clear daylight glinting through the top, where spaceframe and glassfibre bodywork don’t quite marry up.

There are a couple of non-period pieces: the large central fire extinguisher, fitted because removing the front or rear bodywork is not the work of a minute, and that shiny eBay cover for the ECU, mounted vertically between the seats.

Our run out of Ingolstadt takes only a few minutes, but that’s enough to ascertain that the 002 is incredibly loud inside (we’ve eschewed helmets for this journey), and pretty lumpy at low revs. As usual, though, the Quattro’s torquey engine saves Bauch a few gearshifts as we pootle through lunchtime traffic.

Now we’ve reached the quiet country road suggested by Audi Tradition. And, at last, Bauch can hold the 002’s throttle pedal down long enough for the turbo to kick in properly. Oh, Lord. There’s that classic, laggy Quattro punch in the kidneys, a delicious shove made all the more pleasing by the knowledge and anticipation of its arrival.

Five-cylinder notes have graced some splendid Audis over the years, from ur-Quattro to TT RS, but that fluttering scream has always been slung out there in front of you, dragging you along almost against your will. In the 002 it’s shrieking just the other side of the wafer-thin divider at the back of the cabin. Instead of being hauled to the sky by a rocket, now it feels like you’re sitting on it.

There’s a fair amount of pitch as the nose gets forced skywards under acceleration. It’s a sign that, despite its asphalt racer looks, the 002 is quite softly sprung. Now Bauch is revving it out in third, fourth and fifth, enjoying the most comfortable area of a six-speed H-pattern gearbox that isn’t quite playing ball. Three-point turns at the end of each run take a while, as we have to keep switching the motor off to select reverse. All too soon, a local resident, oblivious to the significance of the drama before him, decides that our manoeuvres have interrupted his weeding once too often, and Audi Tradition decides we’d best return to base.

What next for 002? With no specific event on the horizon, Audi Tradition’s Peter Kober and his team can fettle it in a more relaxed environment. It’s likely to make occasional appearances at historic motor sport festivals, and it would be astonishing if it were not seen at Goodwood in years to come. Its one-off status means it’ll not get near much gravel, though.

So, does anything like a useful set of schematics exist for the 002? ‘Not much,’ says Bauch. ‘A few technical drawings, but nothing that would help us rebuild the bodywork if we were to have an accident.’

However, the detail of the RS 002’s schedule is much less important than the fact there is one at all. This car’s past may remain something of a mystery. But now, at least, it has a future.