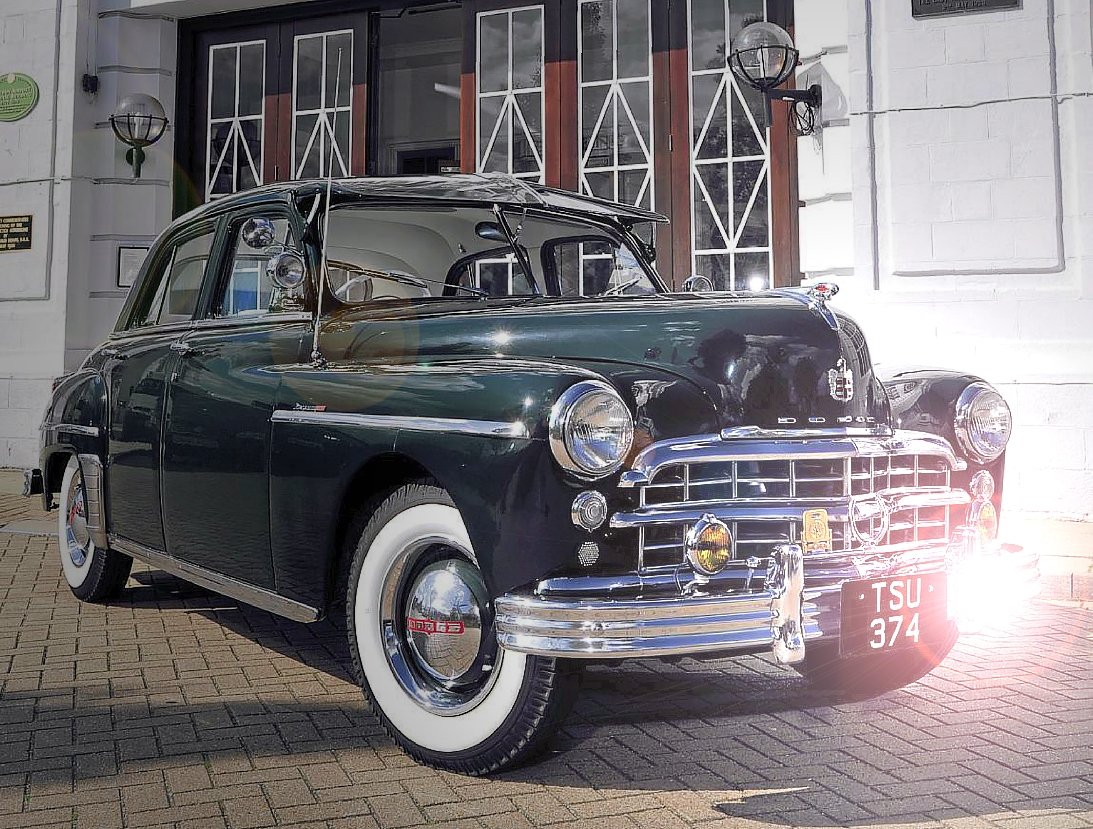 1948 Dodge Kingsway – identity crisis II. This 1949 Dodge is a bit of a mystery car. Some think it’s a 1946 model and we’re pretty sure it may actually be a Plymouth! Some American cars are not always as they appear. With so many variants and rebadged models of different cars made, it can be confusing when faced with a lesser known model. Especially one that’s had over 60 years for owners to make changes and modifications. When I first saw a small photo of Derek Crouch’s Dodge I assumed it was a Coronet, so it was a bit of a surprise when I arrived on his driveway to see a ‘Kingsway Custom’ badge on the front fender. And that’s a big clue that ail is not what it seems with this Dodge…

Derek is one of the most enthusiastic owner’s you’ll ever meet, but confesses he doesn’t know a great deal about this particular car. “I always wanted one,” he explains, “when I was a child a neighbour had a blue Dodge like this and I loved that car.” But it was July 2002 before Derek was able to do anything about it. “I was a taxi driver and was taking a fare across London when I spotted the front end of what I thought was a Cadillac in the window of Chelsea Cars, so after I dropped the fare off I drove back right across London to have a look and it turned out to be a Dodge.”

Back home Derek already had a Mercedes and a Rolls-Royce as part of his wedding car business but this Dodge would be his first American car.

“It looked straight and sound so I cashed in a life insurance policy and bought it for £4950,” laughs Derek.

That could have been a disaster, but Derek’s Dodge turned out to be every bit as good as it looked, needing only routine servicing and, as time went on, a little smartening up. “It hadrotten old carpet so we replaced that,” remembers Derek, “and because I had intended using it for weddings I got the interior retrimmed, it wasn’t cheap, but the guy did a brilliant job doing the headliner and even the boot.

“I’ve Waxoyled it all underneath and so far it’s been lovely except for one recurring problem with the rotor arm which had a tendency to jump out of the casing. I packed it in a bit tighter and that lasted for three years – then it jumped out again. At least that time I immediately knew what the problem was.”

With the exception of the interior the Dodge is largely as Derek bought it. “I removed the fenderskirts it had fitted because I prefer it without them; but it came with the sunvisor and the spotlights – I might wire the spotlights up as indicators; they don’t work as spotlights at the moment.”

Perhaps you’ve noticed the Dodge is right hand drive. “A chap at a car show told me he thought it was a South African-built car and was probably a Plymouth, “said Derek,” but to be honest that didn’t mean a great deal to me, I’ve tried to find out a bit more of the car’s history but come up blank.”

RHD & compact size mean the Dodge feels more like a British car than an American one!

We drive on the left

According to the V5 form the car was first registered (in the UK) in 1990 and was declared ‘manufactured overseas, manufactured in 1946’. A platethe firewall says it’s a Dodge built by ‘Chrysler Corp. Detroit, Michigan’ which, for a right hand drive car, is intriguing. Although I knew Canadian Plymouths were built both left and right hand drive in GM’s Windsor plant it seems that was also the case for CM’s Detroit plants.

Look through the history books and you won’t see much about the immediate postwar Dodges; the cars built before 1949 were not terribly far removed from the 1942 models. For the 1949 model year Dodge cars were given model names for the first time, rather than letter and number codes, or generic Standard or Deluxe badging.

Then in April 1949 Dodge introduced the Coronet as the top trim level offered by Dodge. It was similar to the lower Meadowbrook model in many respects, deviating in interior and trim. The base level Wayfarer four-door sedan was offered for under $1930. The top of the line model was the two-door station wagon which had seating for six and cost $2865. A three-speed Fluid-Drive semi-automatic transmission was standard equipment as were Super Cushion tyres and Bulls-Eye sealed beam headlights.

The ’49 models were rugged and simple. The new styling had a long and low look, but kept the conservative flavour of the prewar cars. The frame was a rigid double channel design that mechanics of the time joked was impossible to bend and when it did, was impossible to straighten. Under the hood was a flathead six that dated Sun visor is a nice feature.

Wood effect is actually painted on back to the Thirties and went largely unchanged until 1959. Plymouth and Dodge essentially shared the motor, although Dodge’s were usually slightly larger, in this case 230.2 cu in to Plymouth’s 21 7.8 cu in. It was somewhat optimistically referred to as ‘the get away engine’ although a 0-60mph time of over 19 seconds was the best Motor Trend magazine achieved.

The ’49 Dodges were built in Detroit, Los Angeles, and San Leandro, California. The cars proved popular, with 256,857 finding homes to make Dodge the eighth best seller that year. But not every Dodge rolled complete off an American line. There were some that went CKD (complete knock down kit) to Africa. Complete knock down vehicles vary depending on manufacturer, but generally the car is shipped as a complete assembly kit of parts, a rolling chassis, painted body and all other bits that need to be bolted together once they come out of the crate. Generally it was done to avoid or lessen import taxes and create local employment, or to allow the vehicle to adhere to local requirements.

We don’t know that this Dodge left Detroit as CKD, but it is known that the Dodge Kingsway name was generally used by Chrysler Corporation for export market models from 1946 onward. Essentially Kingsways were rebadged Plymouths usually with the front end of that year’s Dodge, or DeSoto, bolted straight onto a Plymouth. The idea was for foreign Dodge dealers to sell them in a lower price class.

They continued through the 1959 model year with many different bodywork and trim variations. When Dodge’s compact Dart model debuted for 1960, the Kingsway line was dropped and the Dart became the base model Dodge, elevating the need for ‘Plodges’ – the nickname for Plymouths with Dodge front sheetmetal. There was also a Canadian Kingsway model from 1940 on and off until 1953, but let’s not complicate things any further…

For the ’49 model year Dodge offered DeLuxe and Custom models on 118.5in wheelbase and other models were 111 in and 123.5in. Aside from 111 in and 112in versions, the ’49 Plymouth was also built on a 118.5in wheelbase. So that’s what Derek’s car is then? Well maybe, because after Derek got out his tape measure he reckons his car’s front and back wheels are 119.5in apart; a measurement more commonly associated with some of the 1948 models.

So what do we have here; Dodge or Plymouth? This sort of detective work is often made easier with the internet. After several emails with Dodge/Plymouth enthusiasts and historians we have some answers… and a few more questions. Popular consensus is that the Vehicle Identification Number on Derek’s car tallies with those used for American-built Dodge cars during 1949; Canadian-built cars had a different range of numbers.

On the American domestic market models, the engine prefix typically matched the model number of the car. Derek’s car has a PT prefix to the number which strongly suggests it is a Plymouth or Plymouth Truck number and possibly a Plymouth truck engine – or at least the head from one. Plymouth marketed pick-up trucks (and sedan delivery models) from 1935 until 1942 that came with 201 cu in straight six engines that are externally very similar to the Plymouth 218cu in and the Dodge 230cu in sixes used in the cars – could it be an engine replacement?

Part of the confusion arises from the fact that American manufacturers only started using VINs in 1954. Prior to that Plymouth cars were shipped with three different numbers; a serial number, an engine number and a body number. Although we in the UK might recognise the serial number, or perhaps body number as the VIN, some states used the engine number when registering cars.

A reply from a forum told me: “I suspect your car is an export model originally intended for a RHD market and built in US (based on the VIN). The export cars were typically a mixture of Dodge/Plymouth or Plymouth/Desoto.” That reply came with a link to a very similar RHD ’49 Dodge located in South Africa. The American enthusiasts seemed to agree that the air cleaner on Derek’s car looks very different than the typical American version which apparently have a higher, narrower oil bath / air cleaner painted black. Another potential clue is what seems to be the word ‘PLYIA’ moulded into the tail lights…

So, if I had to stick my neck out I’d suggest this is a 1949 Plymouth built for export as a 1949 Dodge at the Detroit factory. It may have left as CKD or it may have gone as a complete car. But for it to have survived so well, other than what Derek has done there is little obvious other evidence of restoration, we might assume it spent much of its early life somewhere warm. So did it live in Africa – or was it just incredibly well looked after? Unless someone reading this knows better we may never know for sure – but I’d be interested to see what Classic American readers think and I know Derek would welcome more information. What we can be sure of is that the Dodge is a very attractive and unusual car that Derek has no plans to stop driving and enjoying, regardless of whatever it is.