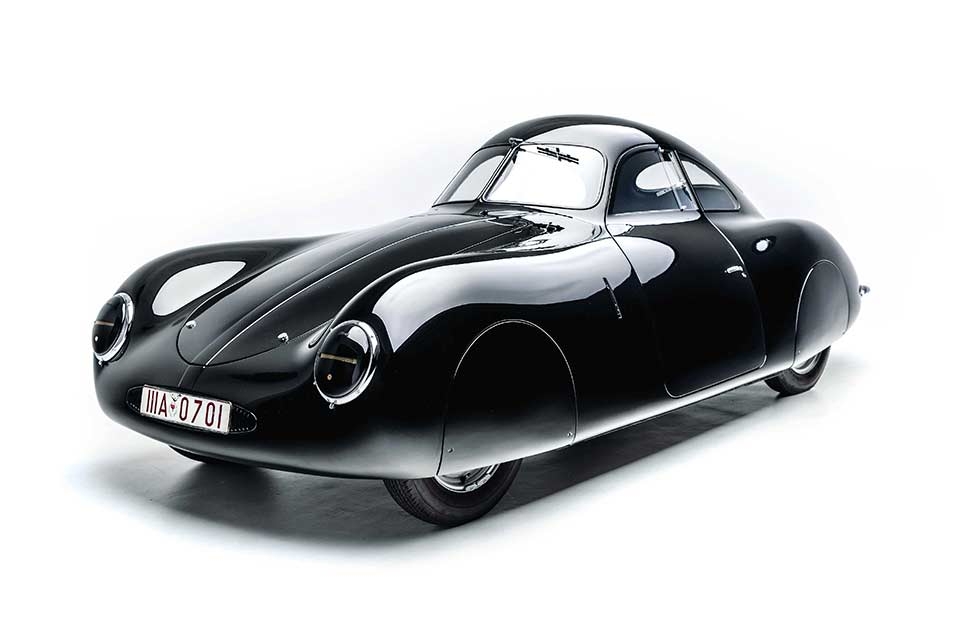 Family Tree. Built to compete in the 1939 Berlin-to-Rome endurance race, the aluminum streamlined Reutter-crafted Type 64 60K10 was created a decade before the 356. Is it the true first Porsche? Story: Andrew Frankel. Photography: The Peterson Automotive Museum.

As everyone reading this will know, 2018 marks the 70th anniversary of Porsche. Or does it? It is all a question of interpretation. The company Dr. Ing. h.c.F. Porsche GmbH’ was actually incorporated in 1931 but, fair enough, it was a consultancy designing everything from Auto Union race cars to the KdF-Wagen (better known to you and me as the VW Beetle) for others. And yes, the first car to go on sale to the public to be called a Porsche was indeed the 1948 356. But what if there had been another car designed and made by Porsche and called a Porsche? Would that not count? Well that is exactly what happened, a car fitting that description being designed a full decade before what is popularly accepted today as being the birth of the Porsche marque. Looked at this way, Porsche is, in fact 80. Welcome to the story of the Type 60K10, also known as the Porsche 64.

As you will probably know, Ferdinand Porsche was the greatest automotive engineer of his era, possibly of all time and he loved sports cars. His problem in the 1930s was that his employers – let’s not be shy about this, it’s the Nazis to whom I refer – did not. Hitler and his cronies were happy to commission racing cars for propaganda purposes and the little KdF-Wagen (if you’re interested it stands for ‘Kraft durch Freude’ or ‘Strength through Joy’ which given what was to come and who commissioned it sounds more than slightly sinister today) for the population to use on his new autobahns, but sports cars? Not so much. Indeed Porsche had gone to his clients and suggested a Beetle-based sports car to be called the Type 64 and had been given the cold shoulder.

So, showing the admirable independence of spirit and iconoclasm that would go on to be the hallmark of so much of what Porsche would do in future, Ferdinand decided to do it anyway. I’ll get to the car in a minute, but let’s pause just for a moment to consider the engine Professor Porsche had not only in mind, but fully designed for the new car. In place of the Beetle’s 1.0-litre flat-four, the Type 64 was to be powered by a 1.5-litre, four overhead camshaft, roller bearing V10. Had it been built, it would unquestionably have been the most remarkable motor fitted to a road car of the pre-war era. But it was not to be: although the motor was fully sketched out on paper, that’s as far as it got.

The car it was to go in? Well it had a second life, of sorts. The original plan for the chassis was in many ways no less ambitious than those for the engine. It called for a mid-engined configuration with fully independent suspension at all four corners, not unlike that of the Auto Union race cars. Had it been made, it would have represented a considerable advance in road car design.

But it was not to be: Porsche was not even allowed to buy parts from VW to make it. And there the story might have ended, but for the Nazi’s insatiable thirst for propaganda. At the time racing in Germany was controlled by a Nazi-run organisation called the NSKK in general and by a man called Adolf Huhnlein in particular. During the 1930s the NSKK wiped out all local cars clubs, forcing anyone wishing to compete to join its ranks, which is why by the time we’re talking about here, just before the outbreak of World War II, NSKK of the membership totalled around half a million people.

And, it seems, not even what by now was the almost certainty of war could stop the NSKK. Apparently somewhat piqued that Italy had a world-renown road race (the Mille Miglia) and Germany did not, Korpsfuhrer Huhnlein decided to stage one – an 800 mile epic journey from Berlin south over those shiny new autobahnen, into the newly annexed Austria, over the Brenner pass to Italy and onto the finish line in Rome.

And showing a quite staggering absence of joined-up thinking in the higher echelons of National Socialism, he decided to stage his race in September 1939, the same month in which Hitler also chose to invade Europe. Had he chosen to go slightly earlier in the year, there’d have been a considerably better chance of the race actually taking place. It never did. But before all this became clear, Huhnlein needed a car to take part in the race that could demonstrate the speed and reliability of the new KdF-Wagen. However the Beetle itself was clearly unsuited to such a task, so Porsche was told to adapt its design into one that could do the job and, with plans for the Type 64 already pretty well advanced, it was fairly obvious where to look.

Huhnlein commissioned the construction of three cars, and while all were built, it seems only one of them was ready before the intended race date. That said at some stage during 1939 it would have occurred even to Huhnlein that the race was never going to happen, so there was clearly no longer any urgency to get all three finished on time.

Their relation to the Type 64 design was hard to miss. The super-streamlined bodywork was almost the same, modified mainly to accommodate the fact that the new car – named 60K10 – would sit on a standard KdF chassis which meant a Beetle wheelbase and a rear-engined Beetle engine installation. And in place of Porsche’s dreamt-of V10, sat a Beetle 1.0-litre flat-four, albeit one whose output had been more than doubled to a whole 50hp.

Even that was enough to propel the slippery Erwin Komenda-styled body through the air at close to 100mph, an extraordinary speed for a car with so small an engine so many decades ago. Indeed I’ve seen a top speed of nearly 110mph quoted, but I expect that’s a theoretical number based on the potential brought by its somewhat elongated gearing. Even with no race to run, the three cars still got used. Sadly it seems that the first chassis was loaned to a VW board member who duly crashed it and that was that. The second and third cars however were retained by Porsche and quietly removed to Gmund, Austria in 1944 when it was quite clear the war was lost and Stuttgart was in the process of being levelled by Allied bombing. The second chassis was commandeered by the Americans when they finally reached Austria in 1945, its roof removed and the car used as a hack until it broke down, was abandoned and lost.

But chassis three was retained by the Porsche family gaining the Porsche badging it so deserved and which has been used by some to suggest that this was, indeed, the first real Porsche. What’s more, it lived in Gmund for long enough to see it become the first home of the Porsche company proper.

By then however Ferdinand and Ferry has their hands full with getting the 356 into production, so in 1949 the single surviving Type 60K10 chassis was sold to a one-armed Swiss racer called Otto Mathé and, it would appear, with a significant number of spare parts. Mathé was a determined racer and campaigned this third and final car extensively, converting it to right hand drive to help manage his disability, crashing it quite frequently and on at least one occasion racing it without a windscreen apparently to aid visibility. The car was raced and rallied until at least 1953 and retained by Mathé until his death in 1995. The car was sold into private ownership where it remains to this day, having been converted back to left-hand drive in the interim period.

You may however have seen a body from a Type 60K10 in the Porsche Museum in Stuttgart, but while painstakingly accurate, this is a relatively recent recreation. If you want to see the closest thing to an actual Type 60K10 in public, it is to the Prototyp Museum in Hamburg to which you must head, to which the complete car you see here has recently returned from being on secondment to the Peterson Museum in Los Angeles. How real is it? Well, the body is recent and commissioned by the Hamburg museum, but the car itself does contain many substantial original parts, believed to be those sold to Mathé at the same time as he acquired the third chassis. At least one other recreation has been built too.

The Type 64, or Type 60K10 as it should probably properly be known, provides an interesting and important curtain raiser to the Porsche story, not least because elements of its design unquestionably went on to inform the 356, so its relevance to the Porsche story as a whole can hardly be questioned. But was it actually the first Porsche? I can see it both ways and, ultimately, I’m not sure it matters much. I’m much more interested in the Type 64 Ferdinand Porsche really wanted to build, with its mid-engined V10 motor. That would have been something to behold – it would probably have sounded pretty good too…

THE PORSCHE EFFECT The Petersen Automotive Museum in California is hosting ‘The Porsche Effect’ exhibition until 2019, of which this vehicle is part. For more information visit www. petersen.org/porscheeffect