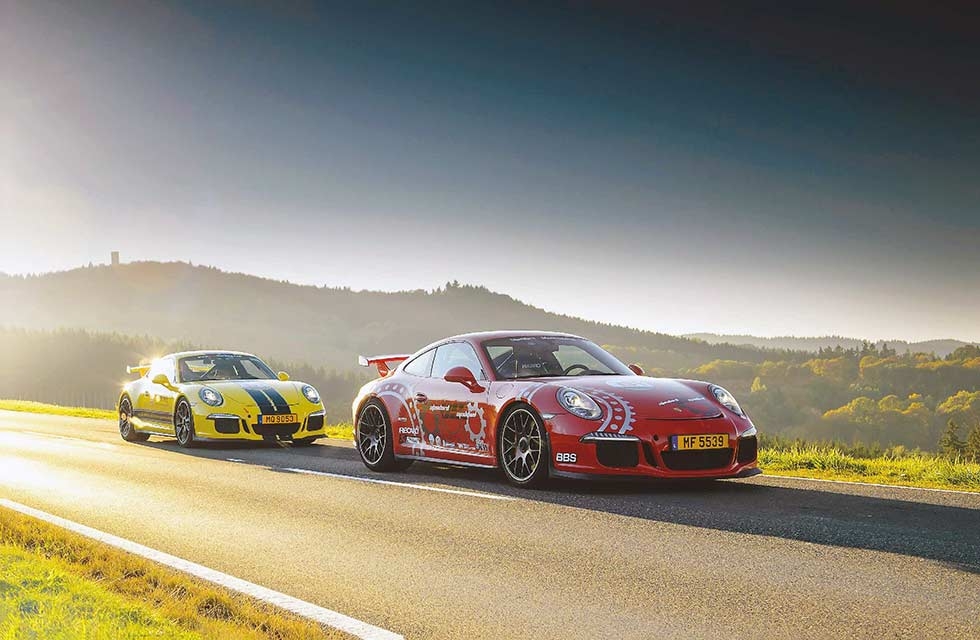 RSR Standard VS Modified   Bringing its ‘70 years of Porsche sports cars’ celebrations to a close, Porsche’s eighth annual Sound Night blew the roof off the Porsche Arena in Stuttgart…

Oversteer. Usually fun – especially if you’ve provoked it intentionally – but midway through Spa’s infamous Eau Rouge complex, in the damp, in someone else’s 991 GT3? Well… Thankfully my instructor doesn’t seem overly concerned, a stab of opposite lock has the GT3 back on line nicely in time to appropriate the correct trajectory for the left kink over the top and onto the wickedly fast Kemmel straight. It’s quite the introduction to the Standard versus Modified programme run by Ron Simons Racing (RSR).

It’s no secret we’re huge fans of the GT3 in all its guises at GT Porsche, so the chance to try a modified first generation 991 GT3 back-to-back against a standard car on the wonderful Spa-Francorchamps racetrack, and the fantastic public roads surrounding the Nürburgring, well, it was an opportunity we were thrilled to take up. It’s a tough job, and all that…

You’ll probably have heard of RSR, it is one of the longest established and best known trackday organisers in Europe. Brainchild of Ron Simons, RSR takes its name from his original company, Ron Simons Racing. Established in 1995, the company grew from a background in racing and tuning track and sports cars. With a solid history in racing and instructing himself, Ron spotted an opportunity to take things onto the next level in 2002 and ‘RSR Nürburg’ was born. With an impressive array of machinery to rent, today operations at the Nürburgring, Spa, Portimao and Ascari, and a solid background in event organisation and management, mean that it’s easy to see why RSR has now become one of ‘the’ go to outfits in the world of high-end track experiences.

One of the firm’s most recent innovations is the introduction of its ‘Standard versus Modified’ programme, which provides a fascinating opportunity to sample the tangible differences a modification package can bring to a variety of cars (rather than taking the ‘easy to claim on paper’ word of a tuner as gospel). The philosophy is simple: take an already capable track car, sprinkle it with a selection of dynamic improvements and then sample it back-to-back with an original version, all under the guidance of an expert tutor. With 11 different cars on its books from the Renault Megane and BMW M4 F82, to Porsche Cayman and Nissan GTR, RSR’s fleet is a comprehensive one which demonstrates the depth of its business. But you’re reading a Porsche magazine, so you want to know about the best Porsche that RSR run in this programme, and that would be the 911 991 GT3.

We’ll be trying both standard and modified examples on road and track to get a proper feel for the dynamic changes certain updates bring, and our schedule starts with six laps in each car at the iconic and somewhat intimidating Spa circuit in Belgium.

If you’ve ever been to the Ardennes region – particularly outside of the height of summer – you won’t be surprised to learn that our visit coincided with overcast, occasionally wet and generally cool conditions – a direct contrast to that which we experienced around Nürburgring the following day. Such is the climate around this part of Belgium. Thank god I’d managed to get a few laps of Spa under my belt previously, and had the chance to warm up in a BMW M235i before getting into the GT3; it’s always helpful to get a bit dialled-in before taking a GT3 onto a track like this, on a day like this. Which brings us back to that moment…

So yeah, perhaps there’s a bit less grip through Eau Rouge than there had been at the wheel of the M235i an hour earlier. However, all is calm in the cabin, a reflection of both the GT3’s composed and communicative chassis and the, er, composed and communicative Ben Lake calmly passing instructions from the passenger seat. Often on hire drive events like these you’re held back substantially by the instructor, told to brake well before other cars (and more to the point, your own ultimate capability), advised to short shift, generally drive at 75 percent and get nothing more than a basic sample of what it’s really like to push the car. But this isn’t the RSR way; its philosophy is to treat you like a grown up: as Ron explained: “There’s no such thing as a dangerous track, just dangerous drivers”. Which is to say, if you demonstrate that you know what you’re doing the instructor is there to help you perfect your line, your braking points, find smoothness, and subsequently lap time. Using all of the available revs.”

And we do. With Ben’s guidance I trim off a full five seconds between my first and final laps, but more to the point with a helpful, encouraging eye in the seat to my right, I can focus on enjoying the GT3 – and it’s predictably sensational. No matter how many times you’ve experienced the extraordinary banshee wail of the 3.8-litre motor beyond 8,000rpm, it’s something you just want to chase down time and time again, and there’s nowhere better to do this than at a racetrack. Much the same could be said for the chassis; how Porsche has honed the unique characteristics of the weight distribution here to provide a stable, approachable platform yet still deliver a uniquely challenging driving experience, is one of modern motoring’s mysteries. Throw in a flawless PDK gearbox and peerless visibility and you have an absolute weapon for road and track.

But then we’re well aware of just how good the factory GT3 is, aren’t we? So with my eye in, and a base laptime set, we sample the more track focused car. Given that the RSR cars are available for hire on the road, the modified GT3 isn’t the harsh, extreme ‘race car with number plates’ you might expect. It comes with KW Clubsport coilovers with three-way adjustment, Winmax WE1 Compound brake pads (endurance spec), BBS CH-R wheels, Michelin Pilot Cup Sport 2 tyres, an Akrapovic Slip-on Titanium exhaust and a Recaro Pole Position ABE driver’s seat. It’s a comprehensive upgrade package designed to give more precision and control, without compromising driveability – taking into account its role as a rental car.

The Recaro seat locates you slightly better – mainly due to the side bolsters – and a touch lower in the car. But naturally, it’s the baritone blare of the Akrapovic exhaust you notice most before you’ve even turned a wheel – it sounds utterly fantastic. Out on track, the combination of the KW suspension, lighter wheels and stickier tyres sharpens every element of the GT3’s dynamic repertoire.

Turn-in is more incisive, grip levels are higher, and mid-corner stability improves, the rear of the car easily able to keep up with whatever the front end asks of it. And none of this comes at the expense of spiky dynamics – if anything the modified car carries less inertia thanks to tauter control, so even when the car slides it does so in an easily corrected and intuitive fashion (particularly through the switchbacks at Les Combes). It’s an utterly thrilling and immersive drive, and I find myself three seconds per lap quicker than my best time in the standard car. It’s impossible to pick out how much each component is contributing individually, but as a demonstration of the benefit of a well thought-out package of complimentary upgrades, it’s incredibly instructive. Six laps of Spa at this speed is plenty, and thanks to the excellent Race Navigator system fitted to each car, you can re-live your laps from the day via USB videos with full telemetry.

I wake up to bright sunshine and T-shirt temperatures at my Nürburg hotel the following morning. Rightly known for the famed racetrack that winds through the Eifel region, there are also some spectacular driving roads to enjoy here. We head out nice and early to get some moving shots in the bag, before sampling each car back-to-back on the superb L10 that heads east out of Adenau; beautifully surfaced and sprinkled with every corner radius you could want in it’s eight kilometres, it makes for a superb test ground.

Shock news: GT3’s are superb fun out here too, modified or not. Perhaps inevitably, the modified car has less opportunity to enforce its dynamic advantage here. It remains demonstrably sharper, but away from the limits of grip we’re talking small increments which deliver a slightly more responsive GT3 at road speeds. The Akrapovic enhanced aural signature reverberating from the trees make it mandatory to crack the window open.

And then I have to give the keys back, which makes me sad. It’s been a fantastic couple of days, and a particularly instructive one at Spa where the advantages wrought on the modified car were so clear; if you’re considering upgrading your own car we’d heartily recommend trying this programme so you can feel the benefits for yourself. On the road, it’s a chance to have a terrific blast in a pair of GT3s – prices start from €299.00.

RSR have come up with something special here, whether you simply want an amazing day driving GT3s at one of the world’s truly great racetracks, or you’re looking to modify your own GT3 and want to sample the tangible improvements available, we can confirm that you’ll have an absolute blast with the ‘standard versus modified’ programme. “There’s no such thing as a dangerous track, just dangerous drivers”

THANKS: Ron Simons and Jonathan Chan at RSR Spa