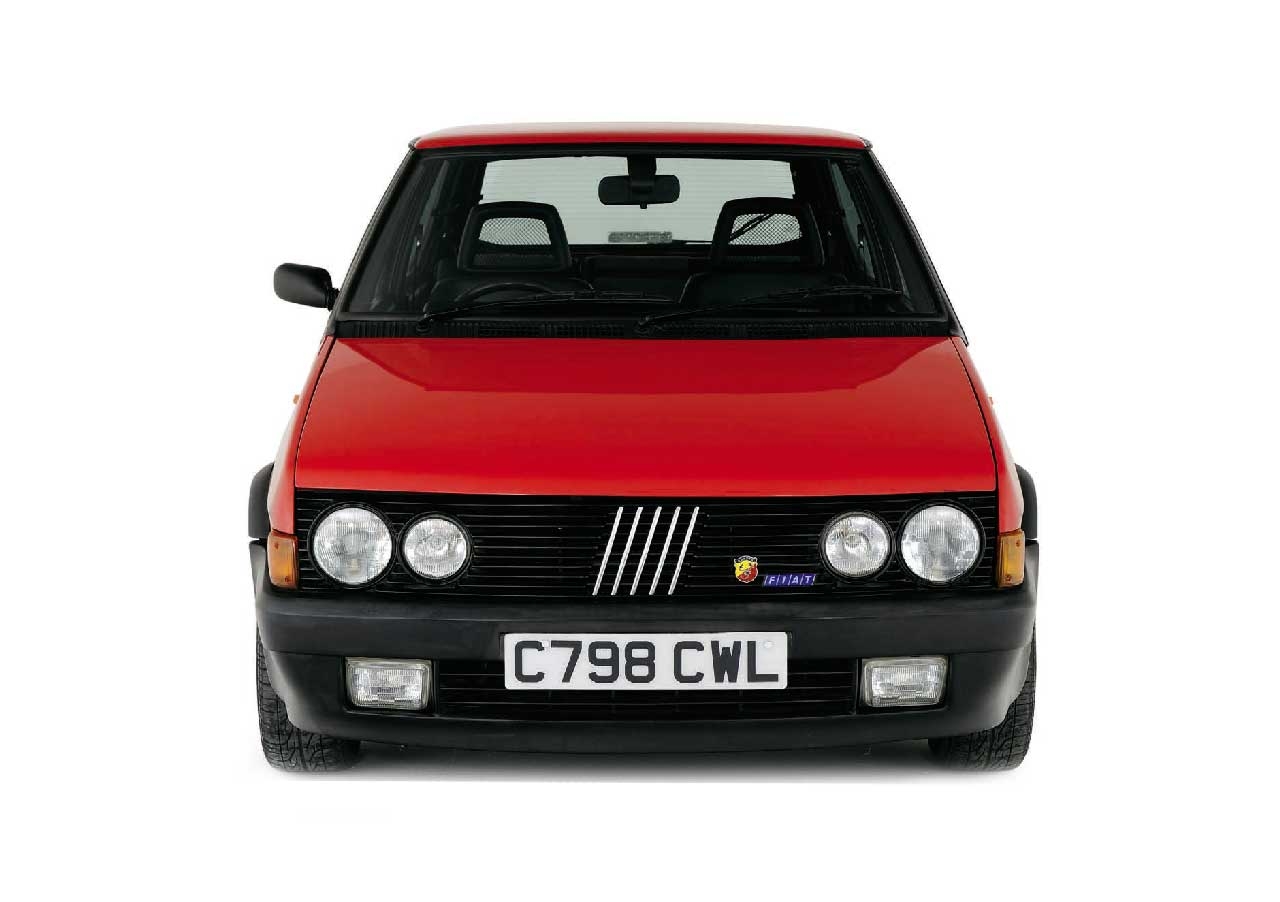 40 years of the Fiat and Abarth classics

Forty years ago, Fiat was clearly in the mood for revolution when the time came to bring its inventive new Ritmo (Strada in the UK) hatchback on to the market. Born in 1978, Fiat’s new medium hatchback really was something else, both in the way it looked and how it was presented – an extraordinarily bold statement.

Here was an everyday car for the masses but Fiat had the courage to break the mould. It also sired one of the great Italian cult classics: the hardcore Abarth 130TC, a car whose speed and commitment managed to refresh the parts the Golf GTi and XR3i just couldn’t reach.

Yes, every now and then, Fiat can surprise us with something truly radical. Back in the late 1970s, Fiat was thinking well outside the box when its replacement for the much loved and highly successful 128 was on the drawing board. While the 128 had been neat, conventional small saloon and estate, Fiat went down a far more challenging route for the highly industrialised product that would become the Strada. For a start, it was a three/five-door hatchback, designed to compete with the growing force that was the VW Golf. It was also much bigger than the pert 128 and looked very different – even though it shared most of the 128’s mechanicals under the skin.

Even now, the Strada – at least in its original form – is something of a jaw-dropper thanks to its thought-provoking, outlandish design that’s credited to Sergio Sartorelli at Centro Stile Fiat, predating the Chris Bangle era at BMW and Fiat by two decades.

Underneath, the Strada wasn’t so groundbreaking. To keep it simple, it adapted much of the 128’s hardware including its transversely-mounted overhead cam engines and front-wheel drive layout. But in its design and the way it was manufactured, the Strada was a step into the future. For a start, it was shaped with a clear eye on aerodynamics and fuel saving. It was also very specifically set up to be efficient and cheap to build.

At the front, you just could not miss that huge plastic bumper, designed not so much for style but to offset small parking knocks and be relatively inexpensive to replace if need be. The way that moulding reached up and around the nose, interlocking with the two round headlights, gave the Strada an odd, guppy-like look. Move around to the back and much the same theory applied. The Strada’s sharply raked front and rear screens, its sharp crease line along the side and, perhaps most strikingly, those funky round door handles – there was nothing else like on the road. Inside, the Strada was roomy and comfortable for its class, also practical, but Fiat’s wholesale use of cheap-looking plastics was hardly much to write home about.

Ah, but the advertising, now that was something else. A brilliant TV campaign put together by the Collet Dickenson Pearce agency showed rows of Stradas being built by teams of robots in a factory without a dirty blue overall in sight. The ad, to the rousing soundtrack of Rossini’s Barber of Seville, ran for two minutes, had no voiceover and ended with the simple caption “Handbuilt by Robots”.

The print version was even wackier. “Designed with a computer. Silenced by a laser. Built by a robot.” Comedians loved it, it’s true, and yet 40 years on it’s one car ad that most people still remember with affection. Less well known is that fact that when the ad agency arrived in Italy to film it all, they found the Fiat factory on strike and had to run the gauntlet of burning tyres and pickets with workers protesting volubly about robots taking away their jobs. Not everyone was signing up to the wondrous ways of Fiat’s futuristic new family car…

All right, so while the Strada was at heart a cooking family car produced in huge numbers (of which sadly hardly any seem to survive today), a series of quicker enthusiast versions eventually began to break cover. Over and above the initial 1.0 to 1.5-litre petrol engine range and 1.7-litre diesel, by 1981 Fiat was ready to offer the warmish 1.6-litre Strada 105TC three-door.

The same year, Fiat tested the performance waters with the stronger 2.0- litre Abarth 125TC for left-hand drive markets. Then in 1982 Fiat introduced the smoother, second-generation Strada family with toned-down looks and greater refinement. By the summer of 1983, we had the true joker in the pack: the Strada Abarth 130TC.

Here was one muscular three-door hot hatch that truly looked the business. Starting with the potent 1995cc twin-cam from the 125TC, the newcomer traded the former’s single Weber carb for a more exotic pair of twin-choke side-draught Solex or Weber carbs, plus meatier set of cam profiles.

Output jumped to 130hp, up 24 per cent versus the 105TC. That meant with a published 0-60 mph time of 7.7 seconds (versus 8.7 for the Golf GTi and 9.1 for the Ford XR3i), so Fiat had no qualms about claiming the 130TC to be “the quickest hatchback of its kind”. Top speed was quoted as “an indecently (not to say illegally fast) 122mph.” Try running that kind of ad today… A close-ratio five-speed ZF gearbox an extensively uprated disc/drum brake package were also part of the 130TC set-up.

Here in the UK, word soon started to build about the 130TC. Journalists who went on the original press launch in Italy came back with rave reviews. In September 1983, your correspondent had first-hand experience of what the 130TC could do when Fiat’s international press department, headed by Giampiero Mantovani, generously arranged to lend me a car in Italy for two weeks.

We flew to Rome and picked up a black 130TC from near the airport. Fantastic! Spending time in that beautiful part of Italy, up from Rome on the coast around Grossetto was compelling enough. Combine that with the speed and exhilaration of a no-compromise road rocket such as the 130TC and life really felt beautiful. OK, so the three-door 130TC was perhaps not the most genteel or refined car in that class, but who cared? The way it went, the sound, the feedback, the level of presentation, the power of that Scorpion badge, that is what I remember, putting it into a whole different league compared to the rather oddball Strada normale.

Then came ‘round two’ when Fiat launched the UK version of the 130TC to the press up in Scotland in April 1984. I was deputy editor on What Car? at the time and readily volunteered for this particular mission. Starting in Glasgow, a fantastic 250-mile country road route that took in Glencoe, Loch Fyne and the Rest-and-be-Thankful hillclimb was the stuff of petrolhead heaven. Praise be, the famously fickle Scottish weather played nice on this occasion, too.

This, though, was a different kind of 130TC, even grittier and no-nonsense thanks in part to Fiat’s decision to equip UK-spec cars with huge Recaro front sports seats. Supportive through the esses, no question, but comfortable and allowing easy access to the rear? Less so. Perspex wind deflectors on the doors were another curio (designed to increase maximum speed by an extra few mph) but all told, the visuals, including subtle body kit, smart alloys and curved rear spoiler were peachy.

Performance really was the 130TC’s forte. The Fiat’s big 2.0-litre twink was endearingly gutsy and strong, offering excellent throttle response and an inspiringly vocal soundtrack all the way up the conservative 6250rpm redline and, ahem, even beyond. Moreover, the Fiat’s high-tech Digiplex electronic ignition helped smooth out the torque curve, which stayed above 110lb ft all the way from 2000 to 6000rpm and, at its peak, generated a meaty 130lb ft at 3600rpm.

Such figures, and a 120mph top end, easily outpaced the Fiat’s biggest enemy at the time, the 1.8-litre Golf GTi, yet few would deny that the Fiat was also the more vocal, less cossetting, thirstier prospect.

The 130TC qualified as a fast, inspiring driving machine, no doubt, with strong grip, keen turn-in and minimal body roll among its calling cards. It rocked, and sometimes when the torque steer kicked in, it almost rolled.

But there was a definite penalty to be paid in terms of ride comfort. You see, on its extensively modified Abarth suspension, the 130TC’s ride had all the subtlety of a Juventus defender practicing catenaccio. Soft, supple and forgiving it wasn’t. Such a tough set-up was fine for the track (Fiat had one eye on domestic Group N racing) but made it pretty wearing around town.

Yes, the VW Golf GTi was the more sophisticated all-rounder and it was better built. At What Car? we set up a group test adding the XR3i and Astra GTE to the equation. Each had its own virtues but none had the speed and exuberant street-fighter character of the 130TC. Today, more than 30 years on, that is what I still remember.

Throughout the Fiat Strada story which began in 1978, evolved through two facelifts and ended 10 years later with the introduction of the Tipo, there’s no doubt that the Abarth 130TC was the star of the show. It remains the most interesting and most collectible model. Survivors are rare (perhaps as few as 30 left in the UK) and increasingly prized today, and no wonder. But the whole Strada range has earned its place in history. Designed by computer, silenced by laser, built by robots, the Strada wilfully put a whole new spin on the art of 1970s family motoring.

TOP: Ritmo in action on the Adamello Classic Hillclimb.

“The way it went, the sound, the feedback, the power – that is what I remember”