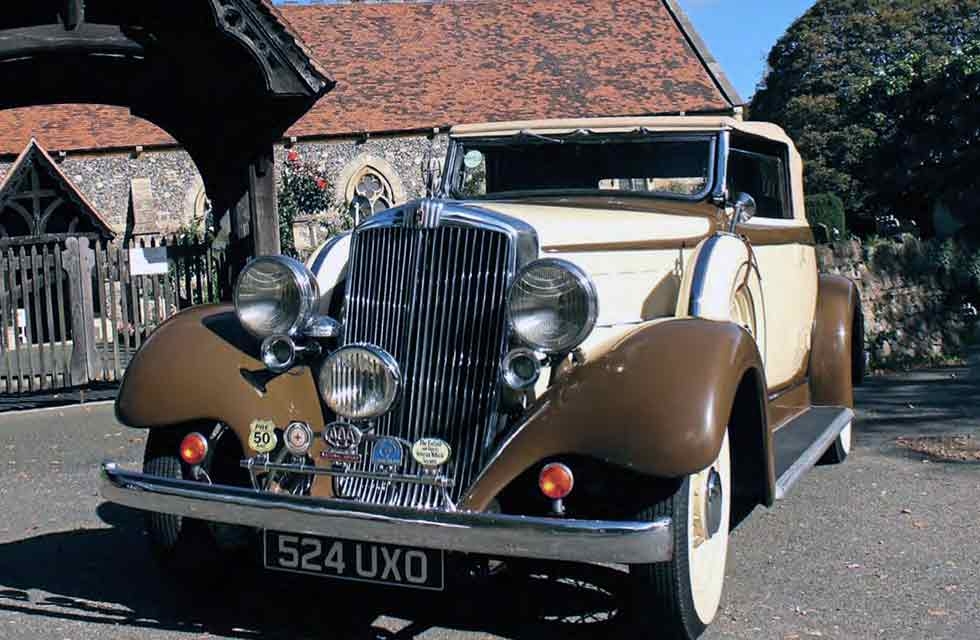 1933 Hupmobile King of the road

Born in 1877, Robert Craig Hupp moved to Detroit with his parents when he was seven years old, where the burgeoning car industry fired his imagination. After working in many capacities for three car companies − Oldsmobile, Ford and Regal − he had learnt enough and made enough useful contacts to consider making his own cars, even though he was not an engineer himself. In November 1908, with a few backers and partners, he launched the Hupmobile Company and they had completed their prototype vehicle in a freezing cold shed by February 1909, just in time for the Detroit Auto-Dealers Show.

The car was a small two-seater runabout and was an immediate success. In 1909 they made 1618 of them. A world tour with the car followed and Hupmobile went on to export 10% of their output, with a strong following in Australia, New Zealand and South Africa. Hupp then left the company to set up RCH as well as Hupp-Yeats, which produced electric cars. Both firms were short-lived and Hupp then left the car industry, but the Hupmobile Company continued with great success, becoming one of America’s leading independent marques.

However, going from producing 65,862 cars in 1928 to a mere 7316 in 1933, no company could sustain such losses for too long. The Wall Street Crash and Depression was ultimately the reason for Hupmobile’s drastic loss in sales. This occurred just as they tried to go upmarket and by buying out Chandler Cars, with a view to expanding at what turned out to be the worst possible time.

Hupmobile employed famous industrial designer Raymond Loewy and used several of his designs until, in 1933, they accepted the first complete design from him; the K-321. It was produced in four body styles, all powered by a straight-six engine, the rarest being the Cabriolet Roadster costing $1095. The coupe and roadster featured a dickey seat in the back. These new designs won much praise with plaudits at motor shows, as did Loewy’s follow-up aerodynamic models. However, they never converted to sales and the last of the line was the Hupmobile Skylark, a modified version of the Cord 810/820, also produced by Graham Paige, who called it the Hollywood. Sadly, 1940 was to be the end of Hupmobile, who in their 32 years of production made a total of 561,464 cars.

The Hupmobile K-321 Cabriolet Roadster has been referred to as one of the most beautifully designed cars ever made, which is a pretty bold statement; however, it is certainly strikingly attractive. The K-321 was built on a 121-inch wheelbase and powered by a 228cu in straight-six L-head engine rated at 90bhp. Indeed, in 1933, the K-321 was Hupmobile’s most popular model, with around 4600 produced. The car also featured a sloped front grille and the bonnet was lengthened to cover the cowl. Bonnet vent doors, first seen on a larger straight-eight model in 1932, were also incorporated for the straight-six.

Barrie Cannon’s 1933 K-321 was shipped to Australia when new as a batch of three Cabriolet Roadster models, the only examples ever to be imported into that country; the other two cars didn’t survive, with one written off in a crash and the other destroyed by fire. The car’s first owner was believed to have been a dentist, named Wright, of Pooraka, South Australia. In 1952 Mr Wright sold the car to Robert David Jackson, still retaining its scruffy, dark blue paintwork which was later rather crudely painted black following ruination by a sand storm. In 1958 the Hupp changed hands again, to a notable and highly acclaimed laser artist and sound-to-light pioneer, Joseph Stanislaus Ostoja-Kotkowski. He had the car repainted again, though it was laid up in the early Sixties due to a serious engine problem. Later, for AUS$500, the Hupp passed into the hands of David P Coney, an American working in Adelaide, and the original engine was replaced in favour of one from a Dodge.

In 1974 the car changed hands for AUS$1200 to Bruce R Thomas and his son ‘Chip’, who completed some restorative work, eventually taking the car back to the US, though still unable to find a correct straight-six engine. Contact was made with Cliff Ferrier, who was restoring a Hupmobile K-321 with saloon bodywork. Cliff saw their Cabriolet Roadster and purchased it in 1981. It is something of an irony that not one but two correct straight-six engines came up for sale not long after, but too late for Bruce Thomas to purchase them for the car.

Next, Cliff Ferrier took the decision to fully restore his saloon’s chassis and running gear and to mount the Cabriolet Roadster on top, which offered him a LHD configuration as well as having the correct straight-six engine. Cliff died in 2001 and the Hupp was purchased by James Godo of Traverse City, Michigan. He also passed away, and the car was then sold at an RM Auction for US$35,450 to a dealer in Canada, who immediately sold it to Waterside Classics in Scotland. The car was then purchased by Terry Bathie of Enfield, Middlesex, who rarely drove it and sold it to the current owner, Barrie Cannon in 2007. The above is a very abbreviated history of this Hupmobile; the full version being incredibly well-documented, going into the finest detail and making for some truly wonderful provenance which many of us could only dream of having for our cars.

Barrie Cannon loves his old American cars, also owning a rare Dort that we featured many years ago plus another Hupmobile saloon, but his K-321 must definitely be the icing on the cake. It’s fitted with all the period options available, including two side-mounted spare wheels with metal covers, twin trumpet horns, a heater, sun visors and interior mirror with inbuilt clock. Over the years, Barrie has carried out a great deal of restorative work on his Hupp; one of the very first jobs being an engine rebuild. He also found that the radiator was blocked, so a new core was fitted, along with the new front axle king pins.

This was followed by some rechroming of the brightwork and a little paintwork rectification in 2013. Then followed a full interior retrim in tan leather (using the original correct trim pattern and spacing of the individual seat and backrest panels) with a new mohair-type soft top especially made in 2014; the workmanship being of an extremely high standard.

“There have been a few other problems over the years, which I’ve needed to remedy,” says Barrie. “A bolt holding the starter motor return spring has fallen out twice. It has now been remade and properly fixed. Around 2010 a wire from the dynamo to the battery came off, causing its fuse to blow. Before finding the wire, I installed a stronger fuse (never do this!) and as a result the dynamo was completely burnt out. The guy that repaired the innards of the dynamo commented that he had never seen one so completely incinerated.

“At the same time, the relay/cut-out on top broke, so there was no charge to the battery. After a diode-based ‘make-do’ also broke, I recently managed to source a new correct part from a tractor spares company in the US and everything works correctly now. Perhaps the biggest headache of a job was when the engine had to come out for a second time in order to cure a huge oil leak caused by a crack in the block, the remedy being to have the block ‘cold stitched’, which was successful.”

Barrie was keen to show us the virtues of his K-321 on the road, so with the soft top fully retracted, we set off on a particularly superb sunny autumn day. Still running on its original six-volt electrics, the starter motor turns the engine over very slowly, so much so there’s always the thought, “is it going to fire up”? The straight-six engine runs remarkably quietly and offers an impressive cruising speed of 60-65mph with ease.

The depth of the windscreen is very small for such a large and imposing car, almost looking like it has been chopped, but the view ahead is lofty and commanding. The front bench seat proves extremely comfortable too. The interior of this car has been fully restored, including the faux wooden dashboard which is actually painted metal, but still looks convincing, and every single instrument is in full working order. From the attractive H-styling of the radiator mascot, to the rear-view mirror with clock and amber indicator flashers just below the dashboard and the etched letters HUPP in the rear brake lights, this K-321 Cabriolet Roadster oozes with attention to detail. There’s no question that Barrie has completed some excellent restorative work on the car, which is very much a rarity in the UK with possibly 5-8 survivors worldwide.

Thanks to owner Barrie Cannon for his help and research into the Hupmobile Company and his car’s history.