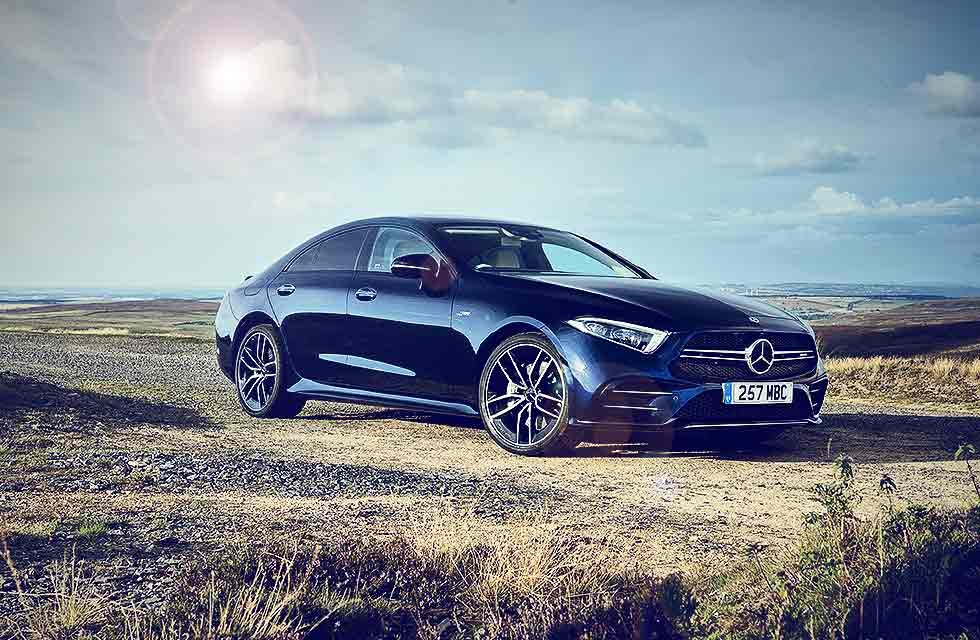 It may be a couple of cylinders shy of its forebear but the balance of hybrid tech and rakish styling makes the halo CLS a more balanced affair.

You always have to question the logic behind hosting the launch of a new performance car at a racetrack. Sure, it looks like a perfect match but, in the case of plying Mercedes-AMG’s new CLS53 on Kyalami Grand Prix Circuit, there’s the definite feeling only half the story is actually being told.

In the previous car, the leap from luxurious cruiser that was the 4,7-litre V8 CLS500 to the 5,5-litre business-suited brawler in the guise of the CLS63 AMG was a precipitous one; from the former’s 300 kW and 600 N.m to the AMG’s 386 kW and 700 N.m. This was the case across the Mercedes-Benz product portfolio until a couple of years ago, when the company saw a glaring gap in its product offering between its “workaday” models and V8 AMG firebreathers, introducing milder, six-cylinder 450 AMG variants which morphed into 43-series models to act as gatekeepers to the AMG fold.

On a flowing lap of Kyalami, the CLS feels at home

But, with the introduction of the third-generation CLS model, there’s been a considerable shift in its position on the AMG landscape. The big development that could have the purists up in arms is the indication that the AMG CLS range will effectively top out with this six-cylinder model and the mantle of V8 four-door-coupé lunacy will be passed on to the AMG GT 4-Door.

Even so, the folks at Mercedes- AMG are adamant the adoption of a new six-cylinder engine bristling with mild hybrid and electric-boost technology will more than compensate for the AMG CLS shedding two cylinders. That explains why, instead of scything along open roads, I’m now ensconced in the CLS53 with my vision flitting between another example revving beside me and a Kyalami main straight traffic-coned for a drag race.

Admittedly, the satisfying chorus of puffs and cracks emanating from the CLS53’s tailpipes don’t quite hold a candle to a V8’s aural drama, but that’s not to say the engine doesn’t possess the goods to render the new car a firecracker. The 3,0-litre inline- six twin-turbo-petrol is good for 320 kW and 520 N.m, and features 48 V mild-hybrid electrical architecture placing a powerful electric starter motor-alternator unit between the engine and transmission. This EQ Boost system not only serves to smoothly transition between engine stop/ start duties while trickling along in traffic, but also delivers measured bursts of accelerative power as throttle and drivetrain settings dictate. The additional 16 kW may sound trivial but the instantaneous 250 N.m kick it brings to the party makes the CLS53 a veritable straight-line bullet. With one eye on the race officiator’s signal to go, accelerator pedal pinned and EQ Boost all but eliminating lag, the CLS53’s tail hunkers down as the power is cleanly pasted onto the tarmac via Mercedes-AMG’s Performance 4Matic+ variable AWD system, effortlessly catapulting the two-tonne car off the line. That claimed 0-62mph (0-100 km/h) of 4,5 seconds feels entirely plausible.

But slow reflexes mean that impressive sprint time isn’t within my grasp today as my opponent surges past. At least it affords me a chance to take in the sight of the CLS53’s striking lines in motion. The previous car’s visual trick of swage lines lending the profile an almost crescent-shaped attitude has been carried over, albeit in a tauter, less billowing manner than before. Slim taillamps flow around the corners of the new car’s cinched, almost Barchetta-like tail and an AMG-infused (read aggressively front-spoilered and twin-blade-grille-sporting) take on Mercedes-Benz’s predatory face stares back at me as my opponent makes his victory pass on the way back to the paddocks. It’s fair to say the CLS has lost none of its visual drama and, in a Mercedes line-up that’s increasingly adopting more radical styling elements, it still manages to stand out.

Similarly, the interior – with its battery of illuminated eyeball air vents and lashings of stitched leather and carbon-fibre trim – also pleases in visual and tactile senses. Mercedes-Benz acknowledged its previous CLS models weren’t the most practical cars on the road and has gone some way to addressing this issue with a recess in the headliner of the headroom-stealing C-pillar and the adoption of a centre pew in the back. It’s an improvement but I’d stop short of saying the more spacious rear bench now renders the CLS a family-friendly proposition. Against the backdrop of the CLS53’s technologically advanced powertrain, however, the omission of the slick MBUX infotainment system and meagre standard specification do stand out.

Its dynamic manners have also become more approachable than those of its sometimes-unforgiving forebear, with variable-ratio steering that’s lighter and slower geared and a smoother, less hair trigger- like throttle, even in the car’s sportiest settings. While a tight slalom run with the air suspension toggled into its stiffest preset didn’t set me sliding out of the bolstered sports seat, you’re aware there’s a lot of metal on the move here. The CLS can still be woven between obstacles at a fair pace in its more softly sprung mode, but then things become decidedly wallowy.

On a more flowing lap of Kyalami, the CLS feels at home, with its nine-speed transmission as happy to drop cogs under hard acceleration as it is smoothly shifting under less throttle provocation. Plunging into tight corners sees the nose pushing wide, whereas booting the throttle in the same manoeuvre ushers in a more tightly wound electronic safety net. An AWD system with longitudinal drive-apportioning (50:50, or up to 100% rearward) rewards the driver with a pleasant modicum of tail slide, as opposed to the less forgiving rearward pendulum of the previous car.

But entertaining though this exercise may be, there’s still the nagging feeling this car really belongs on the open road. Is it refined? I’m guessing as much; the sound of whinnying tyres and engine struggles to permeate the cabin. Is the ride forgiving? Again, on Kyalami’s billiard table-smooth tarmac, it’s hard to tell, but from the waddle and shudder over the few bumps I found, it’s likely sport+ will set teeth chattering on less than perfect roads.

So, it’s a promising start in a less-than-ideal driving scenario. The CLS53’s balanced demeanour will no doubt endear it to a broader audience more drawn to stylish straight-line grunt, as opposed to the red-in-tooth-and-claw lunacy of the GT 4-Door. Some may bemoan the drop to six-cylinders but leaving V8 duties to the GT could actually lend the CLS53 the hint of exclusivity Benz hopes for. We’ll just have to see how this looker acquits itself on public roads before passing ultimate judgment.

The CLS isn’t the only beneficiary of the new EQ Boost-assisted AWD powertrain. The E53 Coupé and Cabriolet models have also been ushered into AMG’s stable and similarly offer a more balanced driving experience than the V8s. Carrying almost 100 kg less weight than the CLS, the E53 Coupé is a tiny bit sharper, with just a hint of mid-corner body flex a small black mark against the Cabriolet’s name. Styling touches include twin-blade grille louvres, rounded exhaust tips and a subtle AMG body kit.

+ handsome and more balanced than before

01 Cabin is sportily trimmed but pre-MBUX infotainment system is unusual.

02 Sports seats are well-bolstered but comfy.

03 Three abreast is now an option in the hind quarters, but those occupants might feel squeezed.

01 Subtle boot spoiler and battery of exhaust ports among the highlights of the CLS53’s tail.

03 The CLS53 packs plenty of punch but is more suited to the open road than a racetrack.