When it comes to BMW’s motor sport history and heritage, Willi Martini may well be the most influential figure that you’ve never heard of. Though not as celebrated as he deserves to be, Martini was a seminal figure in BMW’s history and was instrumental in its involvement with motor sport. Established in 1958 at the Nürburgring, his operations came to comprise a BMW dealership, a service facility, a race team, race car preparation facilities, a wing for the design and development of ‘tuning’ parts for customers and even production operations for bespoke custom BMW-based race cars, ranging from 700-derived touring cars to sports prototypes to Formula 2. He was a pioneer in many technologies, including the use of fiberglass for race car bodywork. An avid driver as well as engineer, he counted among his friends and customers many motorsport legends such as Fangio and Von Trips. It would be no exaggeration to say that Martini’s humble race shop was for many years the racing arm of BMW, though later eclipsed by the likes of Alpina, Schnitzer and of course the works team when BMW at last created it, it was Willi that got the ball rolling all those years ago.

Not surprisingly then, when southern California based BMW collectors and connoisseurs Vintage Motorsport Group learnt that Mr Martini’s personal Group 2 1979 CSL had been discovered, albeit bruised and abused but still saveable, the talented team at the SoCal BMW dream factory wasted no time in acquiring the historic retro relic to return it to its former glory. “Despite being in very sound condition the car needed absolutely everything!”  recalled car owner and all around BMW fanatic Bill Kincaid, a man who, when he’s not inventing fun stuff like iTunes (yes he really did do that), is roasting the radials off one of his impressive collection of sublime street machines or fearsome track terrors.  “My enthusiasm for the project perhaps clouded my judgment,” he laughed, “To turn the shell back into a race car, at least on the terms to which I was committed, using only vintage and period correct parts and with painstaking attention to its history, was an undertaking I frankly underestimated.”

The story of #001/79 starts, not surprisingly in 1979, as the VIN suggests the car was built from a factory-supplied shell rather than a production chassis. “As a typical privateer car it employed bynow standard CSL race bits,” Bill told us, “These included parts from Alpina such as coilover front struts, a slide throttle intake and dry sump oiling. Martini fashioned its own fibreglass components.”

The Martini machine did the rounds at the tracks in its first year and made a good showing, but after an unfortunate excursion off the track late in the ‘79 season the crumpled car was retired and by all accounts, all but forgotten. Eventually sold, the car bounced around Europe for a few years, being subjected to a series of half hearted repair jobs and acquiring some dubious body modifications and a faux BMW Motorsport paint and decal treatment along the way.

The slow resuscitation of the vintage racer began in earnest over ten years ago, when a noted US collector discovered the car hidden away on a used car dealer lot in Amsterdam and bought it with the intension of restoring it, his attentions were however almost immediately diverted by the acquisition of another car and the Martini CSL was again relegated to storage. Sometime in 2012 the car found its way to Kincaid, “I spent three years learning CSL and European touring car racing history,” he told us, “meeting experts, poring over a rich but uncatalogued archive of Martini photos and scouring Europe for parts. I sourced Alpina parts in the UK, along with the gearbox and rear axle from the famed Emilio CSL,” he continued, “Bodywork was sourced in Germany, a complete M52 race motor from a garage in Italy and other bits and pieces from all over. I have personally examined and consulted photos of nearly every extant Group 2 CSL.”

This was to be no simple or straightforward restoration, Bill’s aim was to literally return the car to its original race ready condition and specifications… down to the last period correct nut and bolt. The mammoth undertaking would take a carefully selected team of craftsmen and mechanics, not to mention BMW technical and historical experts, fortunately for Bill Vintage Motorsport Group were more than up to the job. “It was obvious to both of us that we couldn’t do this without some support from someone that was around back in ‘the day’ when this whole concept came to fruition,” explained VMG owner and acknowledged classic BMW motor maven Ron Perry “I thought it may be a long shot, but I suggested that we get in touch with Art Simonds, as I knew that Art was one of the first people that helped develop these cars back in the early days. So, Bill contacted Art and he agreed to come aboard! What an asset he is, a proverbial walking encyclopedia of historical information.” The car had arrived at the shop sporting Group 5 flares, a body treatment it had picked up during its stay in Europe with a previous owner, the first job was to remove these and have the entire shell chemically stripped. “The car was taken to bare metal and documented,” added Bill, “a very interesting process which turned up lots of evidence in support of its history, and helped clarify some of the puzzles I had encountered when researching it. The Group 5 bodywork was removed and preserved, and new front fenders welded in to carry the Group 2 flares,” he continued. “In another bit of serendipity, I was able to obtain flares and a front air dam made from molds taken from the original parts many years ago.”

Topping off the newly restored pristine panels is a trademark Martini paint scheme, Alpine White with bold and striking green trim, said to be inspired by the notorious ‘Green Hell’ stretch of the ’Ring, “In case this point is not sufficiently clear the colour scheme is supplemented by prominent graphics promoting the Nürburgring, including a very large splash of green on the bonnet with a map of the track on it, encircling a frontal sketch of a Formula [car],” explained Bill. The build quality and attention to aesthetic and mechanical detail is stunning, this E9 is a triumph not only of craftsmanship but also stands as an amazingly period correct historical record. The engine powering this fat fendered beauty simply highlights the lengths the team went to to get the job done right, a brand new period correct M52 race spec 3.5-litre was tracked down at Moreschi in Italy, mated to a Getrag four-speed ‘box with a long throw first gear and close ratio second, third and fourth and a correct Alpina diff with the oil cooler make this a historically perfect time machine. “Even the clutch is a period Sachs racing item direct from Germany,” added Bill, “surely the last one available anywhere in the world.” The history lesson continues with a set of original sand formed Alpina headers, brakes from the seventies courtesy of Formula 1 spec Lockheed and Ate and a quartet of multi piece super wide Alpina retro rollers. “I drew up plans to reproduce the large, endurance racing fuel tank but with a modern fuel cell hidden inside,” revealed Bill, “The rest of the boot is filled with the car’s original dry sump engine oil tank and a tank for the rear axle oil which will be circulated by a period pump driven off the axle shaft.”

The interior is as you might expect from a dedicated race car a little on the sparse side, that’s not say the lack of appointments made furnishing it in the correct ‘70s fashion any the easier. The rollbar for example had to be created using measurements taken from studying scores of antique photographs and the dash required the same treatment. Ron didn’t deny the rumours that the team had to track down a period German label maker in order to refinish the switchgear with the correct Martini style markings. The cabin capers, stunning period correctness and lessons in racing history are truly fascinating, but if there is one lasting impression this track shark will indelibly leave with us, it’s the six cylinder symphony a turn of its key and a flick of its switch produces. An angry race machine tuned to within an inch of its life screaming through open headers is a thing of rare visceral beauty… Willi Martini’s legacy, seen, heard and truly recognized. 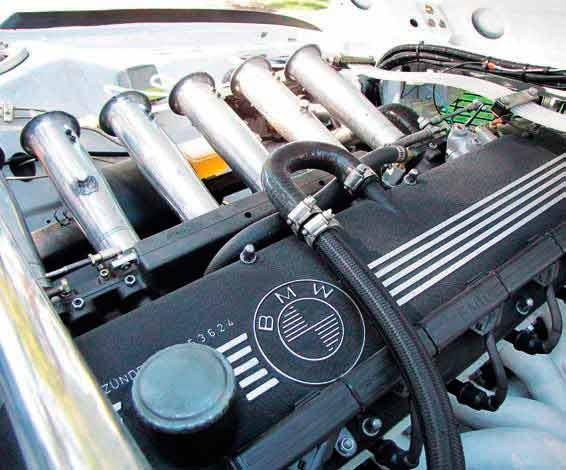 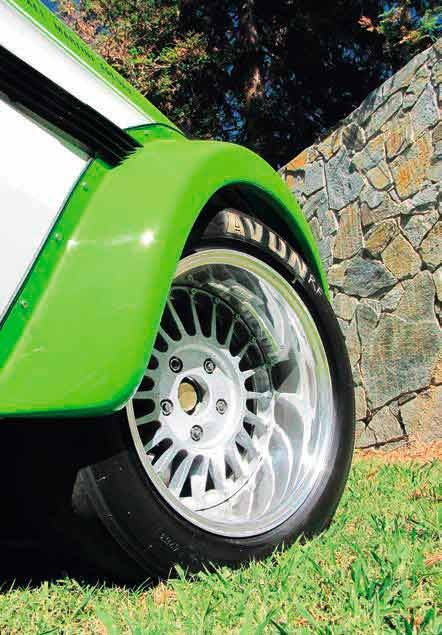 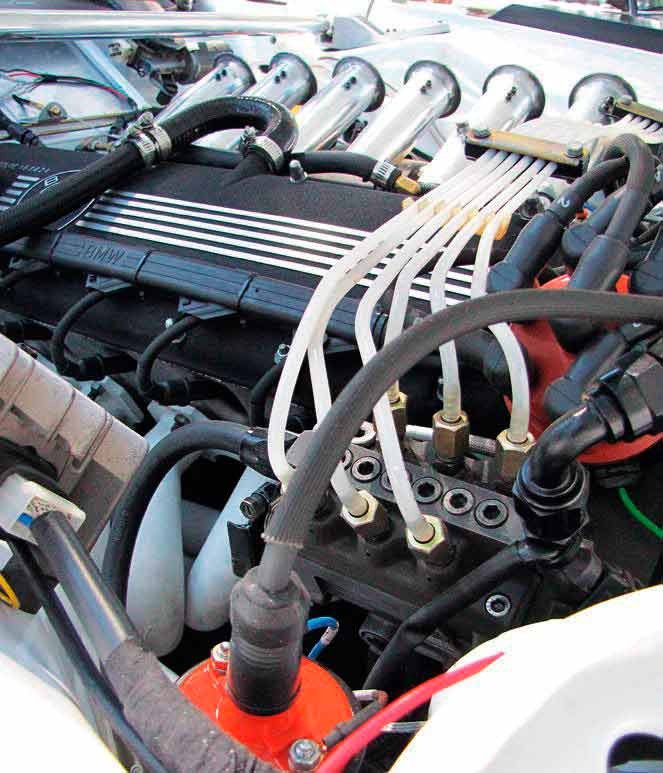 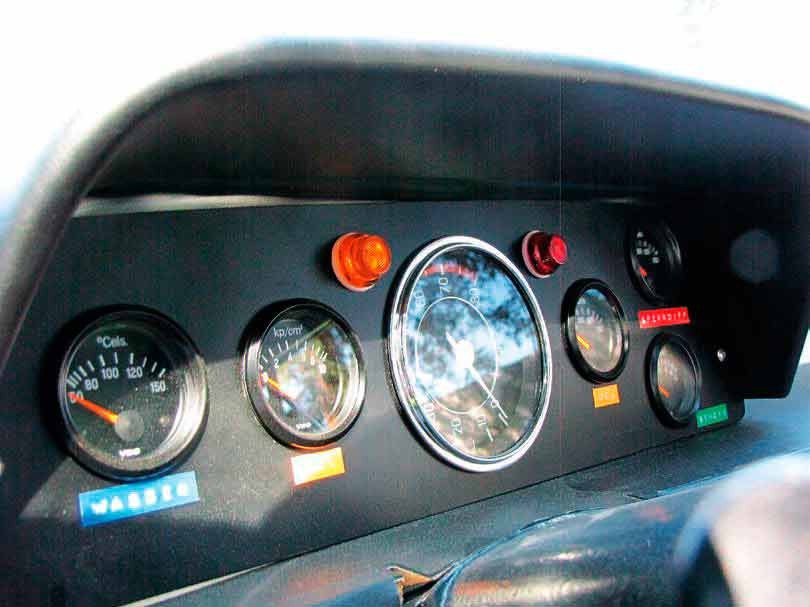 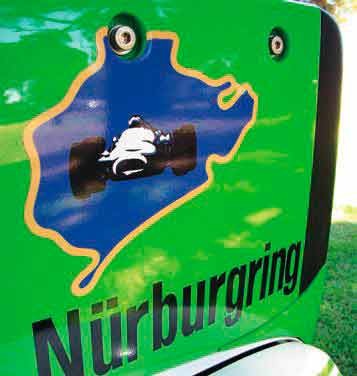 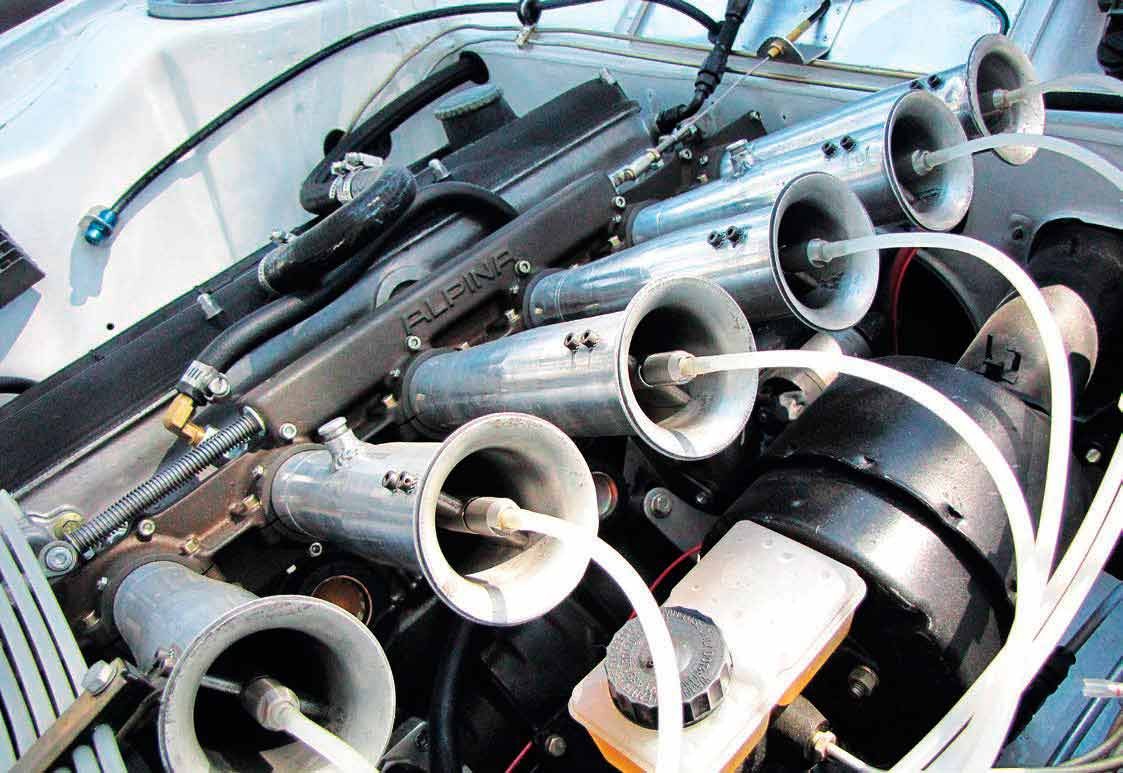 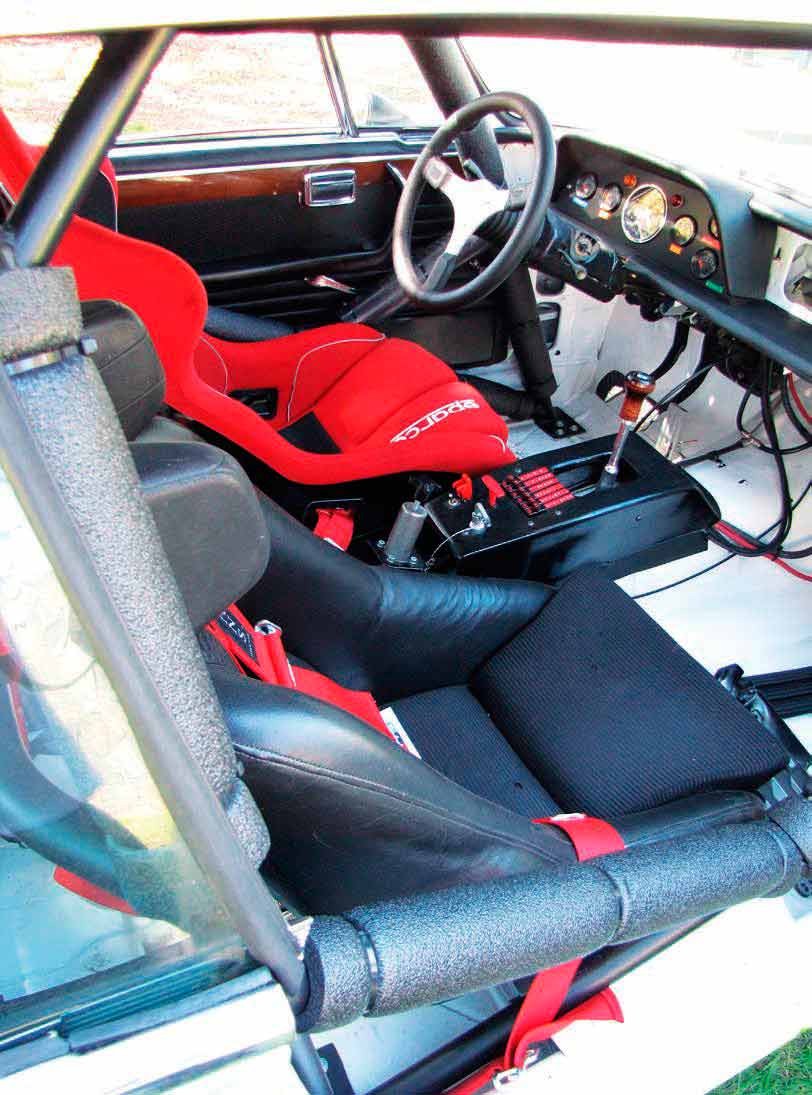 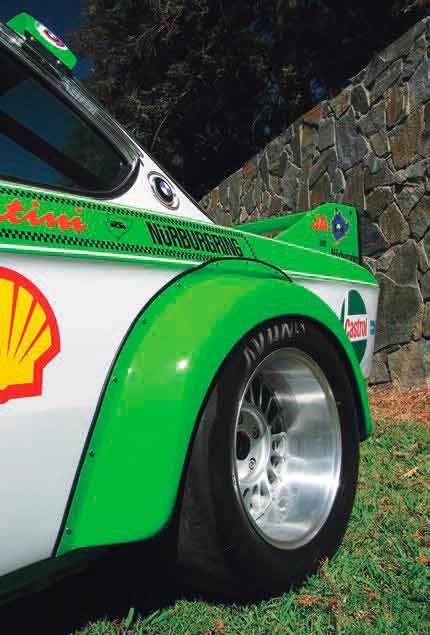 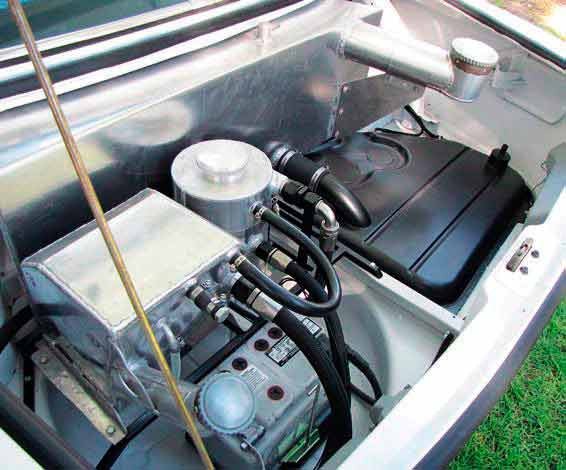 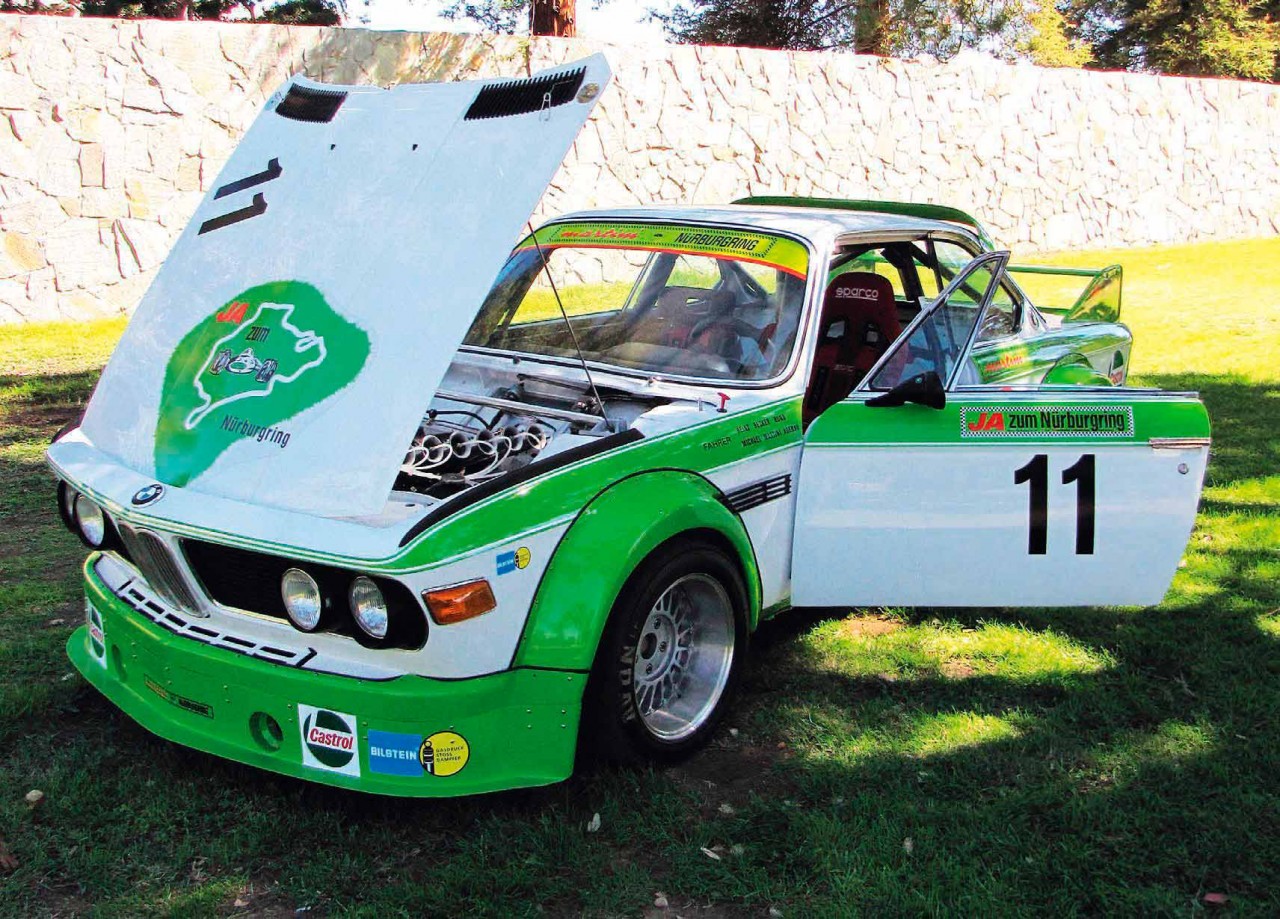 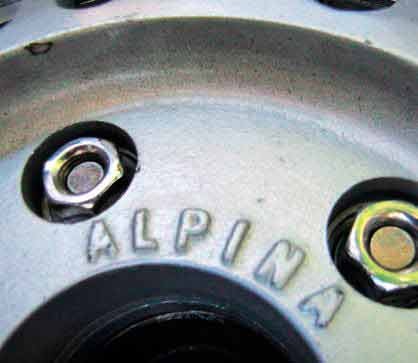 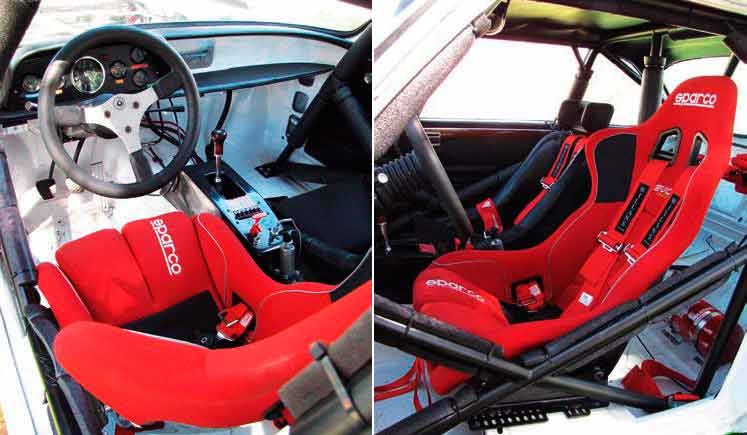