There are people in this world who just don’t get why other people do certain things. They might ask, for example, why you would choose to take out the perfectly good engine from your car and fit a different engine. Why go to all that hassle, they might say, when you could spend that money buying a different, newer, better car? Sometimes, there doesn’t need to be a reason why, a real reason why. Sometimes, we do things just because we want to do them and, when it comes to modified cars, that applies to a lot of the things we do. 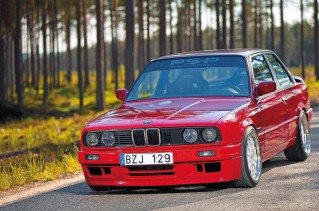 Take Swede Peter Strom, for example. At the age of 28 he’s already got two V8-engined E30s under his belt, cars that people who don’t operate on our wavelength might struggle to see the point of anyway, let alone the fact that he’s built two, sold them and then decided to build a third. But we know, we get it. He loved his previous two V8 E30s and he wanted the thrill of building another one but, this time, an M60 just wasn’t going to cut it, wasn’t going to deliver those same thrills. Peter needed to up the ante and there was only one way to do that…

This new project was going to have to be something a little bit special considering what it was replacing, that being a turbo E46 M3 that Peter had run for a couple of seasons before selling it due to work and family commitments. Building something that could deliver the same sort of thrills was not going to be an easy task but, usefully, he happened to have an E30 318iS to hand that he’d bought a few year previously. Finding himself project-less and now able to once again involve himself in modifying, Peter turned his attention to the E30 and a plan began to form, a very logical one at that. The only sensible thing to do was to get hold an S62 from an E39 M5 and fit that. Obviously.

Easier said than done, however, mainly because of two mains problems you’re faced with when attempting to get your hands on an S62, those being how expensive they are and also how hard they are to get hold of. With only a handful popping up for sale a year, this was not going to be a quick build, patience was required, but eventually the right engine appeared at the right price and Peter pounced, buying it unseen but complete with gearbox. There followed an understandably anxious wait, pretty much standard when you’ve just spent a lot on something without even inspecting it and can only hope that it wasn’t a complete waste of money… Luckily for Peter, once the engine had arrived and he’d checked it over, everything looked good and the project could now get underway. 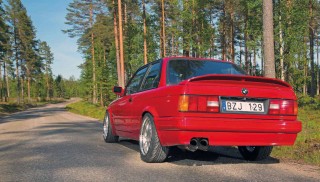 Fitting the S62 was relatively straightforward, thanks to the fact that Peter has done this sort of thing twice before and knew exactly what he was getting himself into. Usefully, the E30’s engine bay is relatively roomy and the M5’s V8 isn’t huge as far as dimensions are concerned, though a little tweaking was required to get it sitting correctly. First of all, the engine was too high in the engine bay, so in order to actually be able to close the bonnet, Peter had to lower the front mounts by 10mm, which gave him just enough clearance. Having started out life as a 318iS, Peter’s E30 had its battery in the engine bay, which was no good seeing as he needed as much spare room as possible to accommodate the V8, so it was relocated to the boot, freeing up useful space as well as helping out with weight distribution. There was no room for the brake servo, either, so Peter removed it and fitted a set of Wilwood reverse swing mount pedals, which allowed him to run a master cylinder designed for use without a brake servo. As for the transmission, the M5’s six-speed Getrag Type D manual gearbox has been fitted along with its propshaft and is connected up to an E30 M3 rear diff and driveshafts.

Peter hasn’t done much work to the S62 in term of performance, because it really doesn’t need much help in that department, but there has been a bit of tweaking going on anyway. As you can see, there’s a dual induction kit under the bonnet, which uses two monster high-flow air filters but what you can’t see are the custom exhaust manifolds, fabricated by Peter himself. The S62’s standard, cast items are notoriously restrictive, being barely any different to the M62’s manifolds, so this is one of the best ways to extract some more power from the mighty V8, and they are connected up to a custom, dual 2.5” exhaust system. Peter has also fitted MaxxECU engine management, which he had mapped by Pure Performance Factory in his native Sweden; the first dyno run resulted in 305whp, about 360hp or so, but after some tweaking the final figure came in at 340hp, which works out at 400hp or thereabouts, so pretty much bang on the money and more than enough to be able to incinerate the tyres at will.

As the old saying goes, power is nothing without control and early on Peter realised that the standard E30 steering rack, with its ponderous four turns lock-to-lock, was no good for any sort of enthusiastic driving so he swapped in an E36 steering rack, which drops the steering ratio to a rather livelier 3.4 turns. Peter also carried out a five-stud conversion all-round, with E46 330i front hubs and a Z3 rear beam, which opens up a whole new world of possibilities as far as wheels and brakes are concerned. On the wheel front we have to try and let you down gently because the wheels themselves are not genuine Hartge Type Cs, but they still look fantastic and have been custom-made to Peter’s specifications. For starters, they’re 18s and 18” Type Cs are not only stupidly rare but also stupidly expensive and, by having these custom-made, Peter was able to get size and fitment spot-on, squeezing 8.5s under the E30’s front arches and 9.5s at the rear. Regardless of how you might feel about 18s on E30s, we’ve got to say that these look perfect on the car. As far as brakes are concerned, this E30 has been fitted with a beefy arrangement up front consisting of 330mm discs combined with four-pot Brembo calipers while the rears utilise the stock Z3 setup, and on the suspension front Bilstein shocks have been fitted all-round. 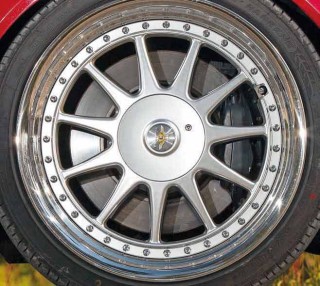 In terms of styling, Peter has left the exterior well alone, but when you’re faced with the prospect of trying to improve an Imola red E30 wearing an M Tech II kit, it’d be like trying to mess with perfection. Besides, it’s not as if a bright red E30 with a V8 soundtrack is ever going to be able to blend in and pass by unnoticed anyway. Inside the only change is the pair of Sparco R100 seats that have been fitted up front, which look great and provide plenty of support when Peter is busy taking full advantage of that mighty S62.

We love Peter’s S62-powered E30 for many reasons, eight of them being located under the bonnet, but we think we like its simplicity most of all. There’s no air, no outrageous wheels, no wild styling, no custom paint, just a huge engine stuffed into a very clean, unmolested E30. It’s a car that everyone loves and it’s been enhanced by an engine that everyone loves, producing a soundtrack that everyone loves. This is a car that is impossible to hate, but who could possibly hate an Imola red E30 two-door anyway?

It’s one of the fi nest moments in BMW history. E30s and V8s go together like strawberries and cream and, regardless of whether you add more strawberries or more cream, that’s never going to be a bad combination. They say that less is more but, sometimes, and especially when it comes to V8s, more is definitely more, and we wouldn’t have it any other way. 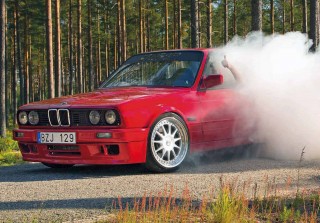 “They say that less is more but, sometimes, and especially when it comes to V8s, more is definitely more”

Poetry in motion? We think so.

Wilwood pedal box set up allows for no brake servo.

With 400hp, this sort of thing comes naturally. 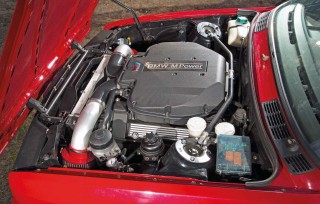 “There’s a dual induction kit under the bonnet, which uses two monster high-flow air filters, but what you can’t see are the custom exhaust manifolds, fabricated by Peter himself”