A few years ago, the whole ‘OEM+’ movement was massive within the VAG world. It still is, somewhat, though nowhere near as prolifi c, with huge wheels and crazy installs the order of the day now. It’s always been much more applicable to the newer generations of cars, with Golfs and Passats wearing trim pieces from their big brothers, with wheels from other VAG group members playing a huge part. 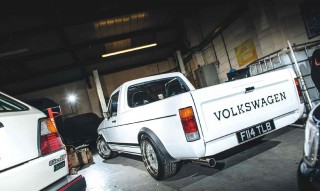 Applying it to the older generations is somewhat more tricky, with even the highest spec cars wearing just 15”s back in the day. But Wiltshire based Kieran Barnett has pulled it off perfectly on his Caddy, mixing understated modern touches with the simplicity of what VW deemed right for their humble workhorse back in the mid 80’s. Garage owner Kieran thought hard about the best way to go about things when he was getting to grips with what started as a simple rebuild. Don’t they all?

Kieran has something of a history with the brand, having owned numerous automobiles that wear the VW roundel, although he started off with something a little less German. “I got into VWs back in the 90’s, when 17” five-spokes were rare,” muses Kieran. After a brief dalliance with a Mk1 Astra, that was made to look like the (now) super-cool GTE, Kieran realised he was missing a trick, and chopped the (probably) rotten example of Luton’s fi nest in for a Mk1 Golf Formel-E. With the bug now well-and-truly caught, Kieran moved onto a Mk2 Driver, before having the green light from his insurance company and becoming the proud owner of a Mk2 GTI 16v. That didn’t last long, however, as he quickly decided he’d be better off in a Mk1 GTI. And that it should be Lhasa green, one of the best colours the Mk1 was available in. This then paved the way for yet another Mk1, this time in 1600 flavour, and this one was going to be a keeper. Sort of.

“It came with a Rallye front end fitted, and was probably as 90’s as it was possible to be.” Kieran ended up buying a smashed up Mk2 GTI, because why not, and proceeded to transplant the engine, box, loom and interior into his newest Mk1. With the Rallye front end already in place, Kieran opted for the now much-maligned Clipper kit, alongside the 90s-as-you-like Audi 80 door handles, and treated the car to a full respray. With the Mk1 now basically a show car, Kieran treated himself to a Mk2 16v for daily duties, before deciding to move them on in 2004 for a 2000 Audi S3, which he still has to this day. The S3 scratched the itch for a while, but Kieran was missing the feel of old cars (by which we take to mean he hated not having to worry about whether they’d start or not). So, whilst sorting out his business partner’s garden, it was a foregone conclusion that the Caddy they found buried in the undergrowth was going home with him in the not-so-distant-future.

It didn’t take him long to realise the little pickup was, putting it mildly, pretty rusty, but a plan was hatched to turn it into a nice, useable truck. Nothing special or too fancy, just honest and simple. A Mk3 TDI was sourced, to donate its 1.9 AAZ shaped heart to the project, and, over the next few months, it was welded, filled, and readied for paint. By the time it came to paint it, the filler had become porous, and was utterly useless. So Kieran stripped it back to bare metal to start it all again… and found yet more rust. Gotta love old cars!

“I could’ve thrown in the towel,” says Kieran, “but it was the perfect excuse to go all out and build something really special.” Not wanting to go down the forced induction route, and keeping it retro, Kieran picked up a Mk3 16v, with a view to using the 90’s hot hatch’s ABF power plant, pairing it with a set of bike carbs for that retro sound, feel… and unreliability.

With the restoration now being done properly, and Kieran running a highly successful garage in his home town of Calne, it was inevitable that this wasn’t going to be a quick job. Over the next two years he really did go balls-out on it, in the end replacing the entire rear floor, bulkhead and front wings. But the main area of work was that engine bay; and boy does it show. It really is like an absolute work of art. With the rain tray, brake servo and expansion tank removed, and the gap between the chassis legs and inner wing welded and filled, Kieran knew that this, along with the rest of the car, had to be absolutely flawless, so some serious work went in to getting this part of the build right, in readiness for the ABF to be fitted. “Hang on,” you’re saying. “That’s a VR6, not an ABF.” Well, yes… funny you should mention that!

During a trip to the automotive Mecca that is Worthersee (seriously, if you haven’t been, you need to), Kieran was drawn to numerous Mk1s and Caddys out there running what is, arguably, the greatest sounding engine to come out of Germany. The aural ecstasy meant that there was only one way he’d be happy now, and that’s with the unfinished Caddy playing host to 2.8-litres of narrow-angled six-cylinder goodness.

Quicker than you can say “stop buying engines, this isn’t normal,” Kieran had himself a donor car. Within a few short weeks the running gear and loom was all removed, and ready for shiny things to be bolted on. With the countless hours of welding and smoothing now complete, it was time to send it off for a full bare-metal respray in Audi Ibis white. Though it wouldn’t be the last time the pickup would see the bodyshop. Whilst it was off being painted, Kieran set straight to work making the engine worthy of being fitted to what was, effectively, a brand new shell. Everything was painted. If it couldn’t be painted it was polished. If it couldn’t be polished it was replaced… you get the picture. Everything needed to be right, and right it was.

This is, undoubtedly, one of the best presented engine bays we’ve seen. It just looks right, without being ostentatious or looking overly modified. And that was exactly the look Kieran was going for when he set out on this build.

“I wanted to create a Caddy GTI, as if VW themselves had made it.” With the subtle additions of the front duckbill, the stripes and red line grille etc, it certainly looks like it could be a factory car. Which is exactly what Kieran wanted. The wheels were the next choice to get right, and for the look he was going for there was only really one option; the ever popular BBS RMs. In 15” flavour and built with Radinox dishes, these are far from the wildest set we’ve featured in these hallowed pages. But that’s kind of the idea. To slow the now pretty rapid pickup down, a VR6 brake setup was employed at the front, whilst the back end proved slightly more complicated. A Seat Ibiza Cupra donated its rear hubs and brake setup to the cause, meaning what would’ve once been a herculean effort to slow down was now the work of but a moment. Finished off with EBC Red Stuff pads and Black discs, stainless and braided lines throughout and a Crazy Quiff pedal box, this thing really does stand on its nose!

With the brakes and wheels sorted, it was time to look at getting the Caddy closer to terrafirma. At the front, BC coilovers with adjustable top mounts and seam welded wishbones play a major part in this thing looking as good as it does, with the standard flipped axle being employed at the rear. Custom billet blocks were needed alongside the adjustable Koni shocks, in order to fine tune the ride height, and the whole thing was finished off by having an entire set of poly bushes thrown at it.

The interior was next, and you’d think with the Caddy’s internal space being so small, it’d be a challenge but Kieran has managed it perfectly. A new carpet was the first thing to go in, followed by those stunning Alcantara door cards and bulkhead. With the engine bay no longer playing host to the battery, the perfect home was found behind the passenger seat, which had now been replaced by the beautiful Cobra Misanos that the car currently wears. Not one to keep things standard, but following the theme, they were retrimmed in stunningly soft leather and Mk7 GTI tartan; and they look perfect. The finishing touch was the Momo wheel.

With the custom Infinity exhaust bolted on, along with the custom top fill radiator keeping things how they should be, it was time for the first test drive. What could go wrong? Erm…

A bent bonnet and scuttle panel is less than ideal on any car, but when it’s literally just been finished and is out on a test drive, it’s somewhat worse. Unfortunately, this is exactly what happened, and meant the car had to go back in for yet more surgery.

Not long after, when rushing to have the Caddy ready for his son’s prom, Kieran had another mishap involving a wrench and his bonnet. “I raced to get the car finished for the big day, and had finished and torqued the wheel nuts up. I was walking away from the car when I heard an almighty bang, so I looked round and the socket had dropped off the wrench, hit the wing and bonnet and chipped paint on both. So they had to be repainted. AGAIN!”

After a long, convoluted and frustrating build, Kieran has created one of the simplest but most beautiful Caddys we’ve featured. A Caddy GTI with a polished VR6 engine at its heart! It shows that you don’t need to have an in-your-face spec to build something noteworthy; you just have to think about things properly, and execute them right.

“It shows that you don’t need to have an in-your-face spec to build something noteworthy; you just have to think about things properly, and execute them right”

SHOUT: Special thanks to Rob and Tim at Prestige Bodyworks in Chippenham, Colin at Nicholls Repair Shop in Calne and Keith Rost

“With the countless hours of welding and smoothing now complete, it was time to send it off for a full bare-metal respray in Audi Ibis white”