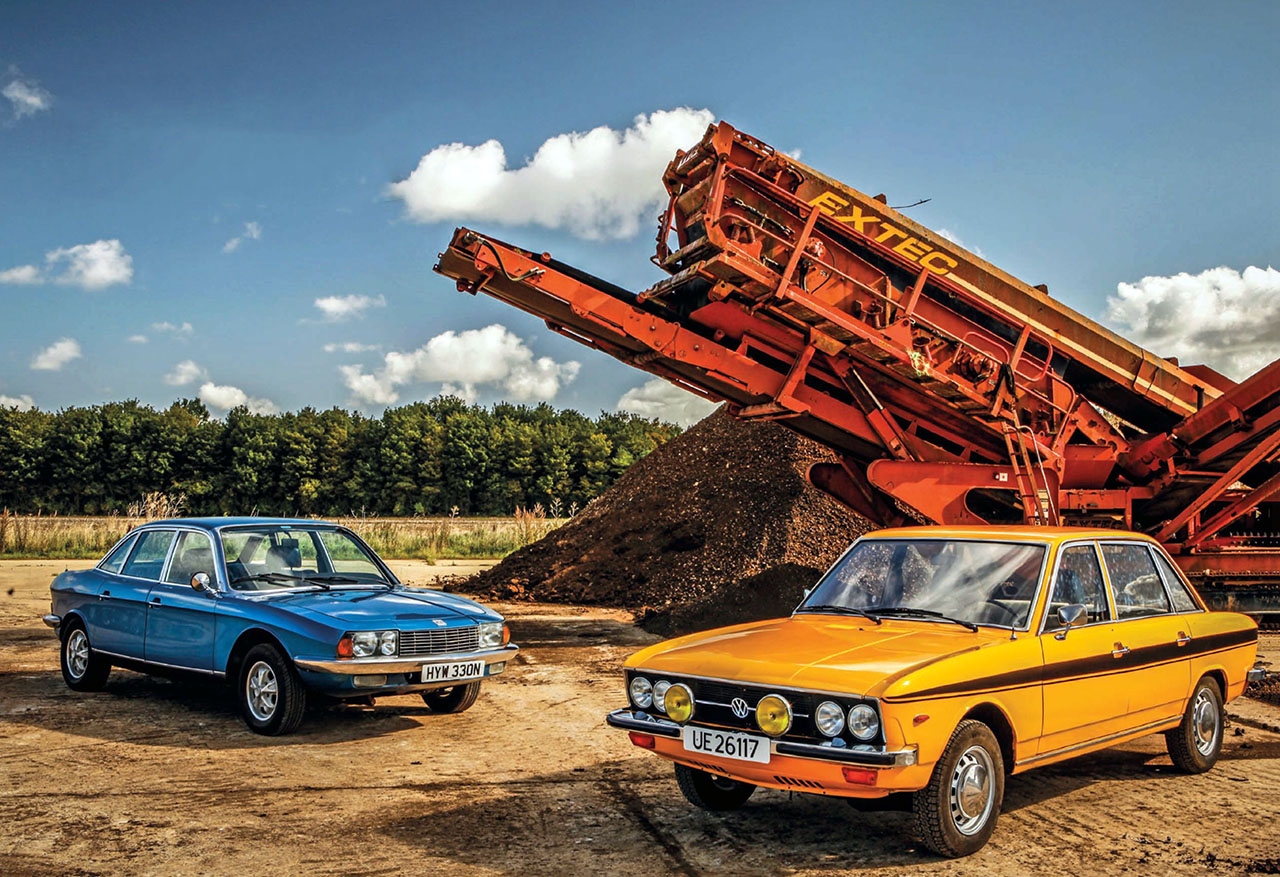 The piston-powered VW K70 meets its Wankel-engined bedfellow, the NSU Ro80. A VW by any other name. The forgotten Volkswagen K70 was born an NSU Ro80.

The K70 began life as an NSU stablemate to the Ro80, but it became a Volkswagen at the eleventh hour. Martin Buckley tells the intriguing tale behind this last-minute change of plan. Photography Tony Baker.

Some cars do their best to elude you and one such in my case has been the Volkswagen K70. It is not an exciting car – or even a particularly desirable one – but something about its story has always niggled at me. How could an all-new German saloon that obviously came from a good family, looked impressively clean and modern by the standards of 1970 – and clearly aspired to be more than just another cynical tin box – have such a conspicuously short, four-year career and 211,000 production run?

Historical significance is not a guarantee of success or excellence, of course – the K70 was the first front-engine, front-drive, water-cooled Volkswagen – but, even so, its subsequent descent into obscurity as a car that is rarely talked of or written about has always seemed odd to me. Superficially, the K70 appeared to have all the ingredients for success, not least a good engineering pedigree. It was common knowledge that it had been conceived as a simplified, pistonengined companion to the masterful-but-flawed Ro80, although fewer people seemed to know that ‘K’ stood for Kolben (or piston in German) and 70 was its intended bhp. The fact that it was launched as a 75bhp NSU in 1969 but went into production as a VW in ’71 gives the K70 an additional level of intrigue. I cannot readily think of another car that can claim the dubious distinction of being publicly born under one brand name but brought to market with another.

So could it really have been that bad? There were no clues in the way it looked. Quite the opposite. Neat and well proportioned with lots of glass and usable space for people and luggage, the K70 seemed to be precisely the sort of rational 1.6-litre Euro saloon that Wolfsburg needed after a rash of ’60s duffers. Here was an ideal front-engined, front-drive answer to face the early ’70s in which the public (and the legislators) were rapidly turning their backs on the slow, noisy rear-engined cars that had formed the basis of Volkswagen’s post-war success. Unveiled as an NSU-badged prototype at the Geneva Salon in March 1969, the K70 promptly dropped from sight again for several months in the wake of Volkswagen’s takeover of NSU and its integration into the Audi/Auto Union division. While the rotary-engined Ro80 was allowed to continue as the group’s NSU-badged technical flagship, it seemed to make sense to realign the almost fully formed K70 as a VW.

After years of struggling to replace the Beetle, here was the water-cooled powerplant that Wolfsburg needed. With the new technology came the fresh creative blood that Volkswagen needed even more, principally in the form of NSU chief engineer Ewald Praxl (already in his 60s by then) and a much younger stylist called Claus Luthe, originator of the Ro80’s futuristically elegant body. Luthe’s subsequent stellar career at Audi and then BMW in the ’80s would be cut short by a personal family tragedy. 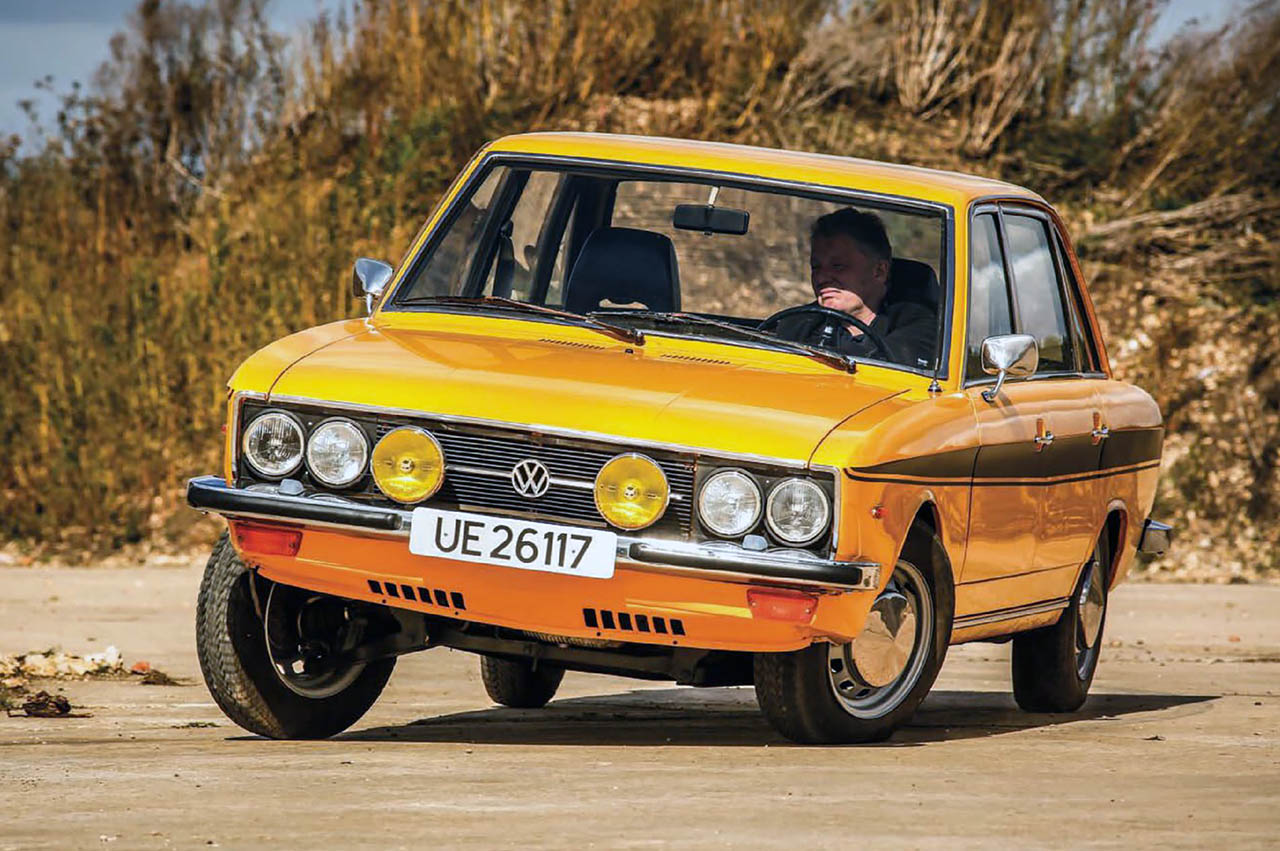 In styling the K70, Luthe was given the task of creating a shape that did not need to be particularly aerodynamic but had to be easier to build and have a wider appeal than his edgy, slippery Ro80. At the same time, it had to be visually linked to it; there was certainly a hint of the Ro in the car’s flanks, belt-line and low waist.

The K70 was at least a cost-effective proposition because its engine was a water-cooled and longer-stroked development of the old 1177cc engine from the last of the air-cooled cars and, crucially, could be produced on existing NSU tooling. Canted over and mounted well forward above the final drive, its overhead camshaft was driven by a double roller chain, while each cam follower had its own individual pressed-steel cover – harking back to the rear-engined cars and NSU motorcycle engines of the ’50s – that gave the unit a distinctive top-end appearance.

Actually, there was less in common with the Ro80 than is generally acknowledged. Shorter in wheelbase and overall length than the NSU, the K70’s direct commonality with the Ro80 was restricted to front-strut, rear trailing-link longtravel suspension and inboard front discs – plus a few minor items such as external doorhandles.

The car was made production-ready by VW, but lost some of its NSU technical niceties along the way, such as the use of pressed-steel box-section lower wishbones instead of the more elegant Ro80-style welded tubular ones. VW upped the wheel size from 13 to 14in and offered Ro80- type Fuchs alloys as an option on the post-1973 LS versions with the 1807cc 100bhp engine.

This car, owned by enthusiast Fredrik Folkestad, is one of the later LS models, complete with quad headlamps, matt-black side flash and standard steel wheels – although Folkestad plans to fit a set of alloy rims in due course.

Your view on the K70 depends what you are comparing it to. For those of us old enough to remember bouncing along in Mk3 Cortinas, it seems quite nice at first. It’s agile and supple and – with the bigger 1800 engine – reasonably quick. Yet it is hard to reconcile it as the progeny of the Ro80, an example of which we’ve brought along for reference courtesy of Simon Wolfe, a London-based jazz musician and schoolteacher who has coveted these cars since childhood.

What you do notice is that the K70 is almost as roomy as the Ro80, with a similarly enormous boot that is augmented (as in the NSU) by rear backrests that fold down to accommodate long loads such as skis. The 360º vision is equally outstanding in both cars and, while you would expect the K70 not to be quite so refined and pleasing in its detail finish, the build quality and materials are by no means bad. It features pleasing velvet cloth seats and a heavily hooded instrument pod that looks closer to what Luthe had originally intended for the Ro80. 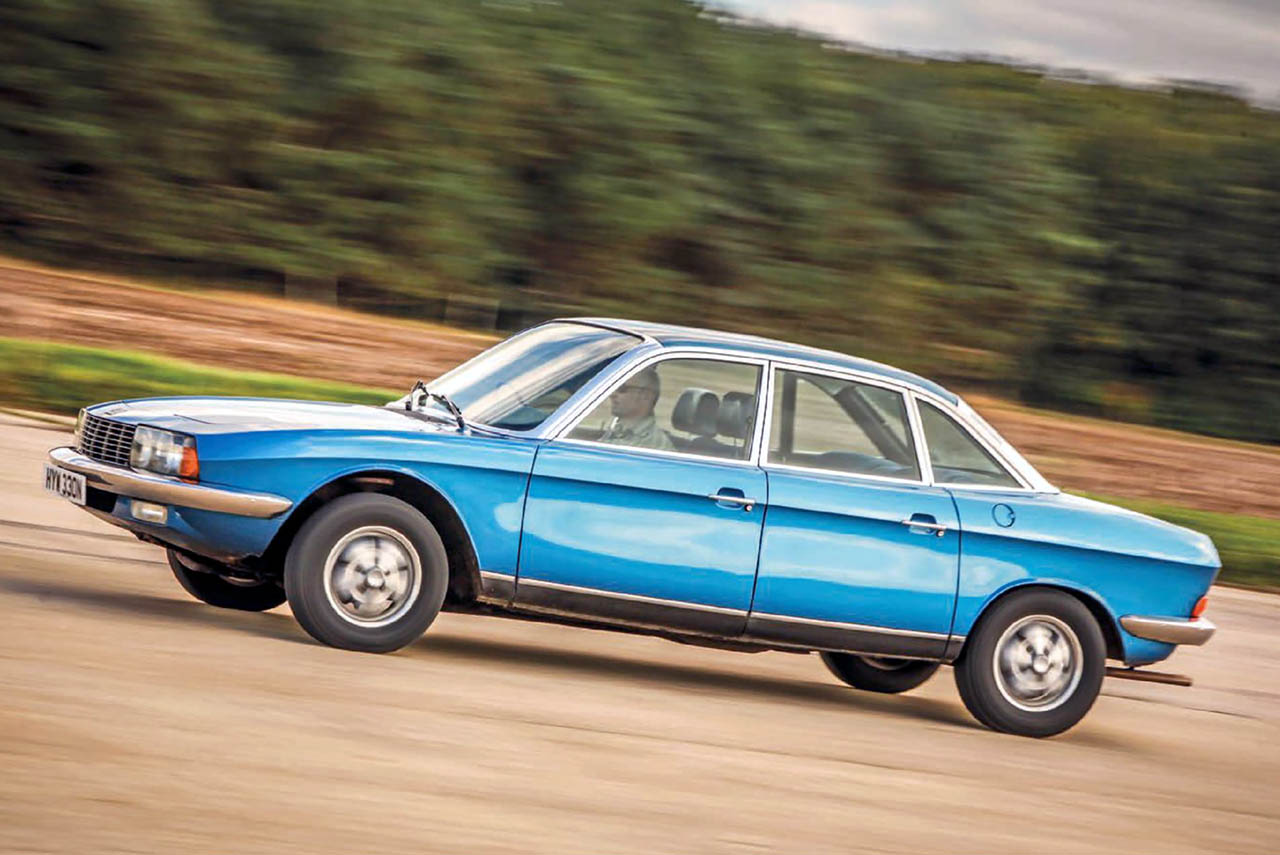 This is where all meaningful comparisons with the NSU end, however. As a driver of the Ro80, you live in a hushed world of effortless high-speed cruising and easy town manners with that clutchless three-speed gearchange cushioned by a torque converter and operated by a microswitch in the top of the gearknob. The power steering is perfectly weighted and the whole car is just so civilised and capable.

There is a lack of torque off the mark, but the acceleration is strong and very smooth once the rotary engine is spinning beyond 3500rpm. First takes you to 40mph, second to 80 and top to more than 115mph, a speed that it will cruise at – as long as the fuel lasts. Without a doubt, these are greedy cars when they’re driven hard.

All of this is matched by total stability, fantastic brakes and a ride that just ignores speed humps and makes you realise how badly your fillings rattle in most modern saloons. Yes it rolls, but it also hangs on tenaciously – although total and final understeer is the ultimate result of the sort of hooligan treatment that is not really what this most cultivated of ’70s saloons is all about.

There are echoes of the Ro80 in the Volkswagen’s road manners. Its long-suspension travel gives a wonderfully supple ride and it doesn’t descend into run-wide understeer as quickly as its nose-heavy engine layout might suggest. But as you twiddle its hefty unassisted steering, pump its clutch and stir your way through its notchy and undistinguished four-speed ’box, the K70 feels as joyless as the Ro80 is spirit-lifting.

The original 1605cc cars were criticised for a lack of low-end torque, but this bigger-engined LS feels lively enough – and will keep up with the Ro80 at lower speeds – although the engine just feels thrashy and uncouth when asked to deliver performance. It vibrates and resonates and, while it never feels as if it would fly apart, it gives you no encouragement to extend it.

All this, of course, has to be balanced against the fact that the K70 was a much cheaper car than the Ro80 (roughly half the price) and one that, in fairness, it was never intended to be compared to. Its underdeveloped and, by all accounts, rather thirsty engine is only one component in the story of the K70’s failure.

In fact, as usual, it was a combination of factors that conspired against the VW in roughly equal measures. Without a doubt, its confused and hesitant birth stacked the cards against the car in the public’s mind from the off, and perhaps for too many people the link with NSU equalled potential reliability problems. And for those who admired the Ro80, the relatively noisy and slightly over-bodied K70 might have proved underwhelming – especially when you could have had the superficial charms of a lusty Ford Cortina 2000GXL, say, for £300 less.

More to the point, possibly, the K70 sat awkwardly in the combined-marques range, in which you could buy an Audi 100LS – frankly a much nicer car – for a mere £150 more. People often say that the Ro80 would have been a great car even without the rotary engine. I suppose the irony is that, had NSU produced the more conventional K70 first, it might have survived, at least for a little longer, as an individual marque.

When the VW Passat emerged in 1973, the K70’s fate was in effect sealed and only about 800 had been sold new in the UK by the time that it faded away in ’74. I probably have not seen one on the road for 20 years. Folkestad had to go to Norway to find his and, while I can understand its appeal as an oddity, it is hard to know how to sum it up. Today, maybe, the real ‘problem’ with the unloved K70 – which strangely gets lots of attention from the public wherever you go in it – is that it is not rubbish enough to feature in any smartarse list of all-time crap cars (far from it). Yet it has insufficient character to really make the grade as a classic in the true sense of the word. The Volkswagen appeals only to lovers of curiosities or the hardened Audi/NSU completist. Perhaps you need to have a K70 just to remind yourself how good the Ro80 really is. Luckily, Folkestad has one of those as well.

‘AS YOU TWIDDLE ITS HEAVY STEERING, IT FEELS AS JOYLESS AS THE NSU IS UPLIFTING’

Left, from top: roomy VW cabin has good-quality cloth and hooded binnacle that was intended for the Ro80; LS came with 1.8 engine; airy glasshouse; earlier model had single oblong lamps – angular front contrasts sharply with NSU’s rounded nose. Right, from top: equally spacious NSU is better equipped and trimmed with plusher velour; similar badge indicated that it has a rotary motor; Ro80 also has a brilliant ride – and leans a lot – but it boasts stronger grip and fantastic power steering.