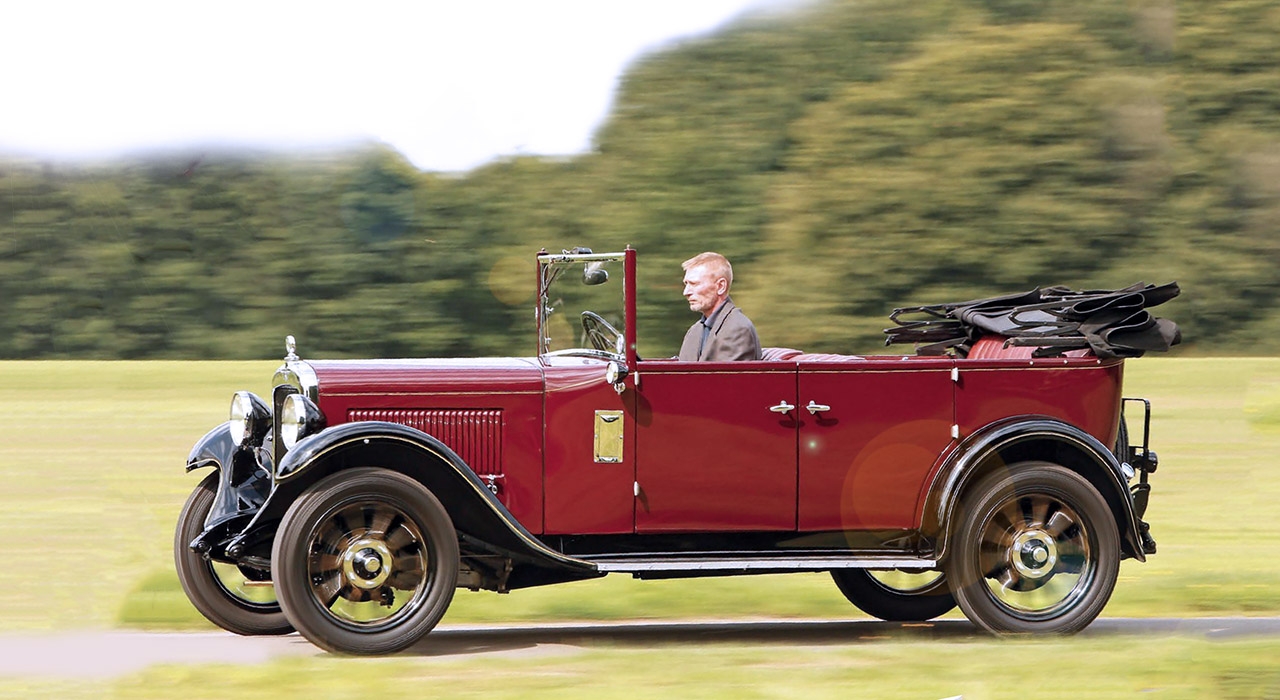 Film star’s Twelve ‘Old Min’. Peter Sellers owned many exotic cars, but a 1930 Austin was his true love. “He even removed the temperature gauge and replaced it with a coffee percolator”

It is no startling revelation to state that Peter Sellers was an automotive enthusiast. It was an aspect of his character mentioned in scripts for The Goon Show, and expensive cars would feature in many of his publicity pictures. As a child, he promised himself that ‘if I ever had enough money, I would buy cars, cars, cars’.

His obsession once led him to own an AC for a mere 120 minutes: ‘Took it out in the morning. Didn’t like it. Traded it for an early 1½-litre Jag.’ Roger Lewis – who wrote a biography of the actor – came across ‘a yellowing closely typed list, pages and pages long, of all the registration numbers of all the cars that Sellers had once possessed’. The one that seems to have meant the most to Sellers was a car that would have been at home on the set of The Ladykillers. Not all of the actor’s fleet could be classed as exotic – at various times he owned a Morris 1100 and a Riley One-Point- Five – even if his most high-profile cars, ranging from Aston Martins to Ferraris, certainly were. But possibly his most important car was the 1930 Austin Heavy Twelve Open Road tourer de luxe that Spike Milligan named Old Min. 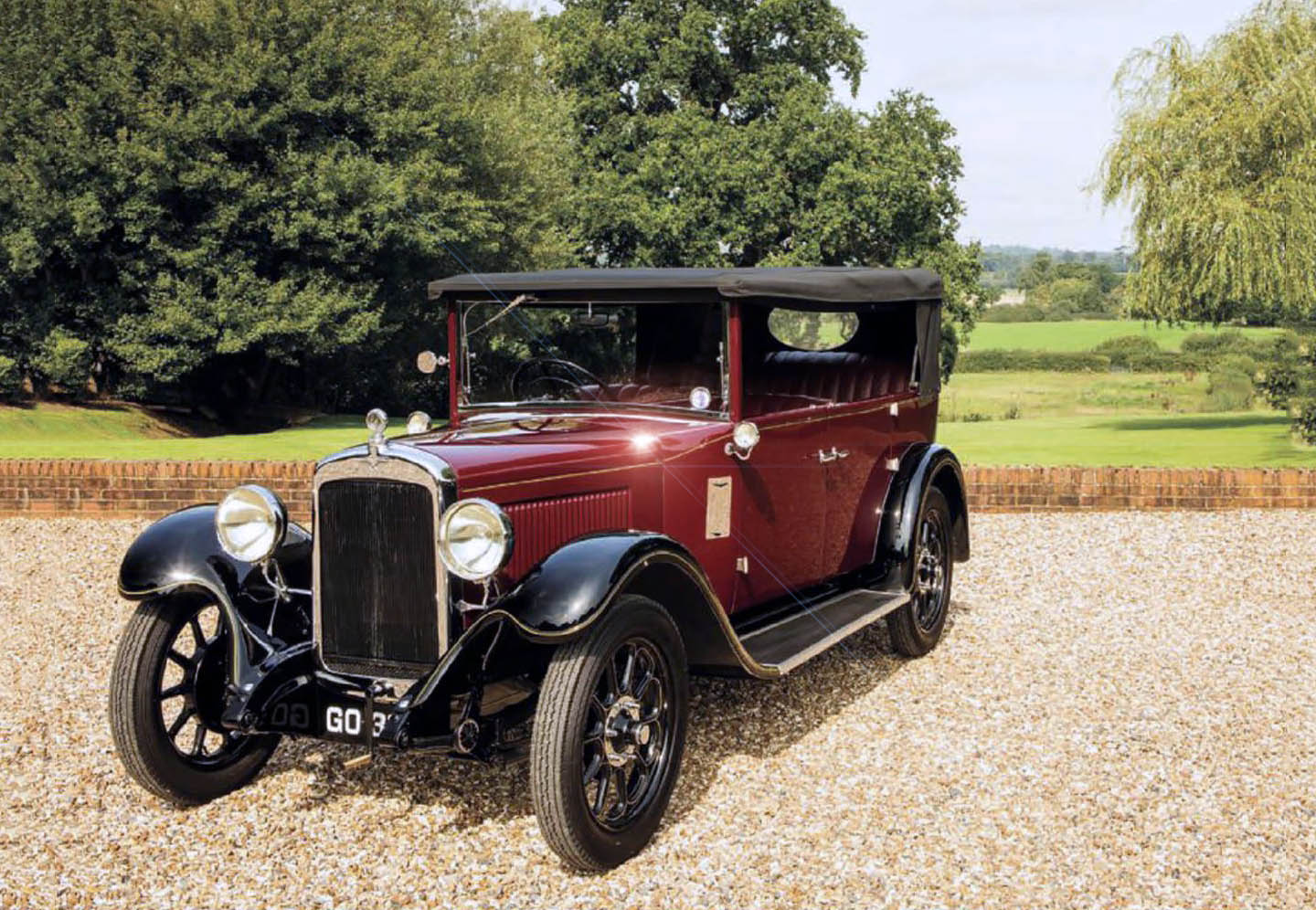 The handsome but conservative Austin was an unlikely favourite of Sellers; wheel dominates the beautifully restored, leather-lined cabin.

The Austin had been acquired by Milligan in the 1950s – hence the Goon-derived nickname – but Sellers coveted the car as soon as he saw it. As the decade progressed and the actor’s growing fame allowed him to purchase an ever more elaborate array of vehicles, he remained captivated by a car that was rare – many Twelves were lost during WW2 – but still could have been a 50-guinea bomb-site trader’s special.

The Twelve was launched in 1921 as the second of Longbridge’s post-WW1 models. To look at, it was a scaled-down version of the larger 1919 Twenty, and it was described by Austin as ‘a utility vehicle of attractive appearance and efficient performance’.

Power was initially via a 1661cc engine, increased to 1861cc for 1927. As a 1930 model, Old Min benefits from the various improvements made during the previous decade, such as four-wheel brakes, scuttle vents and the windscreen wiper that was introduced in 1924. The standard equipment list also included a clock, a 12-volt electrical system and individually adjustable front seats in a leather-upholstered cabin.

Production of the Twelve continued until 1935 – although taxis were made up to ’39 and War Department models as late as 1940 – and in the last years of its run it gained the Heavy prefix in order to distinguish it from the later Light Twelve-Four and Twelve-Six.

One of the reasons for the Twelve’s commercial success was its combination of elegance and durability; another was its reasonable price tag. It was an Austin with an almost automatic appeal to the nation’s solid middle-class citizens – doctors, clergymen and headmasters. As to which of the many coachwork options is the most aesthetically pleasing, some enthusiasts favour the Clifton, now indelibly associated with Val Biro’s Gumdrop, while others prefer the discreet dash of the Open Road tourer. The original owners of such Twelves would have been less Peter Sellers and more Raymond Huntley, although the lines imply a solicitor with a caddish imagination. 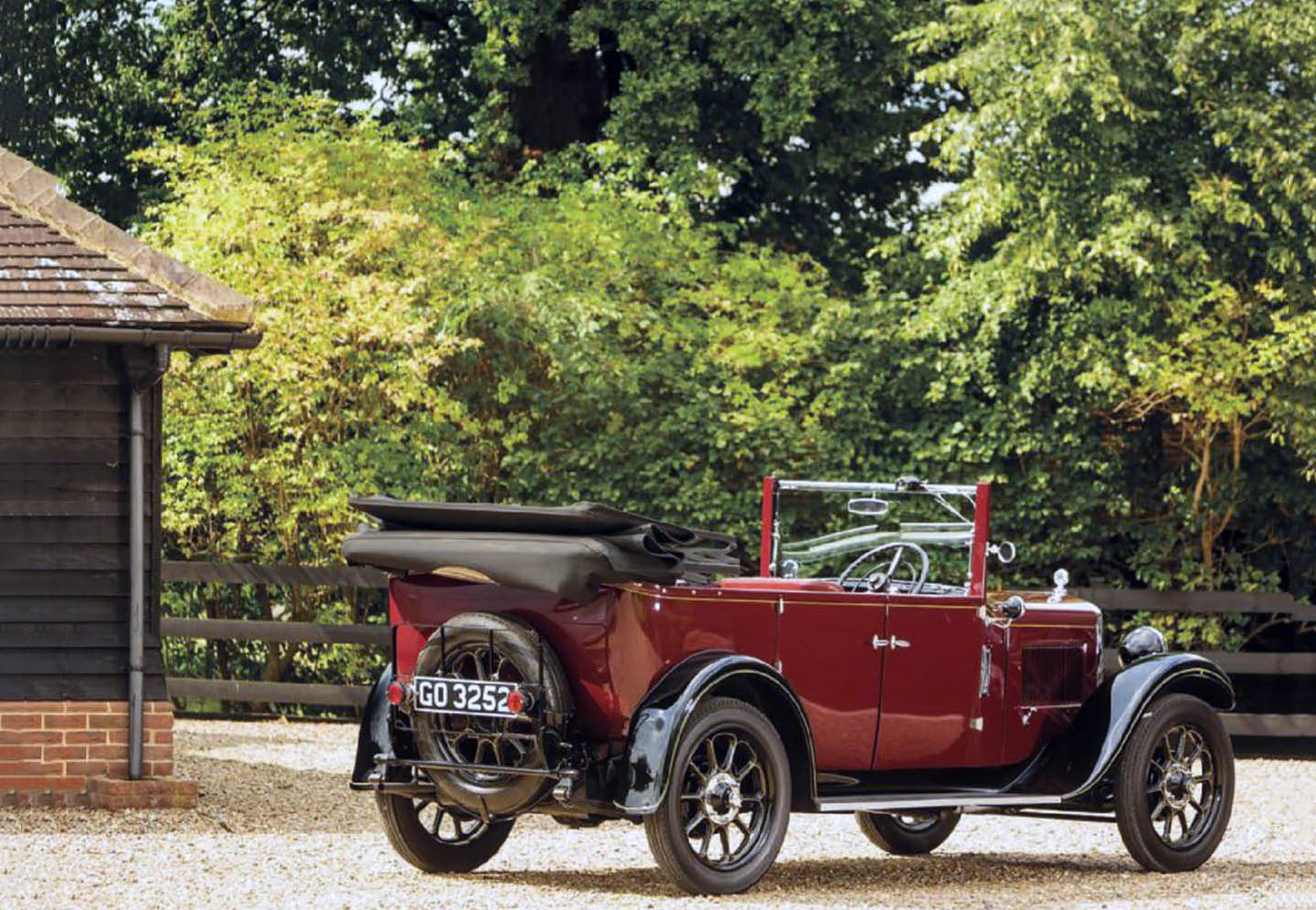 By the 1960s, when Sellers moved into the DB4/Ferrari/Rolls-Royce income bracket, Old Min was still on his mind. In 1962, he met Aston Martin specialist Richard Williams during the filming of The Wrong Arm of the Law, a delightful comedy that featured a DB4 GT. Williams became Sellers’ virtual UK fleet manager and, by 1968, this incorporated Old Min after Milligan lost his driving licence – the latter once remarked that the Austin “went back and forth between us about four times”. Sarah Sellers does recall her father taking the wheel of Old Min: “I was very young at the time and I mainly remember her because she was a vintage car.”

Eleven years later, Sellers gave the Twelve to Milligan, only to retrieve it after 10 days. Williams received a call complaining that “Spike was not garaging her, that he left her outside and that he had even removed the water-temperature gauge from the top of the radiator and replaced it with a coffee percolator”. In short, Milligan was not looking after Old Min, and that was not a matter Sellers was prepared to countenance. After the latter’s death in 1980, Old Min’s history becomes clouded but Williams, together with friends and family of Sellers, would have regular lunches in his memory. One year, such a gathering was attended by the Austin’s latest owner, and it was decided that if he ever decided to sell the car it would go to Williams – something that finally happened on 9 March 2010.

At that time, Old Min was “in quite nice condition, but not ‘Peter Sellers’ condition”. This was a very important distinction given that the actor, according to his secretary Hattie Stevenson, was “on a one-man quest for perfection in acting, cameras and cars”. And so, despite its field of expertise being “Astons not Austins!” RS Williams embarked on a restoration of the Twelve to bring it up to not merely Longbridge standards, but Sellers standards.

This was to be a long and exceedingly painstaking process, carried out alongside the firm’s regular work by Mark Lewis and Andy Sawyer. All areas of the car – the body, chassis and engine – were treated. The hood is original, the leather upholstery was sympathetically refurbished, and every aspect of the paint has a lustre that Herbert Austin himself would have approved of.

The thin coachlines were not a 1930 option, but rather a Sellers touch that was in keeping with the Twelve’s persona. Apart from that subtle modification, it is just as it left the factory. The powerplant was rebuilt by noted vintage Austin expert Bob James: “I replaced everything that had any sort of wear on it, although overall it was in quite good nick – the crank and bearings were in remarkable condition. I fitted a new clutch, a pair of new timing chains, new pistons and had the cylinders re-bored. I also had the valve seats re-cut and ground to suit and, although three of the timing sprockets were quite good, I had to replace the other two.”

In 2015, the year in which Sellers would have celebrated his 90th birthday, Old Min was finally completed. To see her in the sunshine is to be simultaneously captivated by her elegant appearance and very grateful that we do not have to raise the hood and fix the side curtains – ones, as Austin proudly boasted, that ‘opened with the door’. This is a car for fine weather and, while travelling through the Home Counties, the impression is not so much of Peter Sellers but of Leslie Phillips or any other British light leading man prone to saying “Gosh!” on a regular basis. The ladder chassis copes with the very worst of British road surfaces by the simple method of treating them with utter disdain, and to be honest I think that all modern cars should be fitted with running boards; they are both practical and distinguished.

As with almost any car that once was the property of a celebrated figure, however, there is the temptation to muse about how it conveys the memory of its former owner. Thus, I must honestly report that above the clatter of the redoubtable engine I kept hearing Wallace Greenslade intone: “That was The Goon Show, a recorded programme featuring Peter Sellers, Harry Secombe and Spike Milligan.” Old Min is the antithesis of the wicker-panelled Hooper Cooper, the Lotus Elan, the Silver Cloud and so many other members of the actor’s 1960s fleet – she is not so much concerned with speed but with ruggedly solid transport. Williams believes that one reason Old Min meant so much to Sellers was that he innately appreciated quality in motor cars. He also remarks that, as a driver: “Peter treated the Austin very kindly, which he was not always prone to do!”

This test possibly means more to me than almost any other I’ve done for C&SC. In my day job as a film historian, I genuinely regard Peter Sellers, at the height of his powers, to have been the finest actor in post-war British cinema, and so the experience of riding in Old Min was on a par with another scribe driving the former property of Graham Hill or Jim Clark. To suggest that the Austin was the star’s Rosebud in a UK version of Citizen Kane would be to indulge in tabloid cliché at its extreme worst, for it is both a priceless aspect of Britain’s motor heritage and a facet of a complex public figure.

As a screen presence, Sellers was protean – watch I’m All Right Jack, Only Two Can Play, The Optimists, Never Let Go or his truly magnificent performance in Heavens Above!. Just as his MG Magnette or Bristol 407 reflected certain aspects of his character, Old Min was of great importance to him. You could speculate that he first encountered the Open Road tourer at an optimistic time of his life, when his fame from The Goon Show was starting to be augmented by his growing career as a leading character actor. But what is beyond any debate is that Williams, Lewis and Sawyer have preserved automotive history at its most charming. Cue Max Geldray with the Ray Ellington Quartet.

‘SELLERS GIFTED THE AUSTIN TO MILLIGAN, ONLY TO RETRIEVE IT AGAIN 10 DAYS LATER’

From top: temperature gauge once again adorns radiator, rather than Milligan’s tongue-in-cheek replacement; rear boasts a sturdy luggage rack. Below: a proud Sellers with Old Min – he kept the car until his death in 1980; the 1861cc four-cylinder engine was dismantled at RS Williams, then rebuilt by Bob James from the Vintage Austin Register. Clockwise, from above: neat side vents; artillery wheels with delicate coachlines; lowering the roof transforms the Austin’s character. 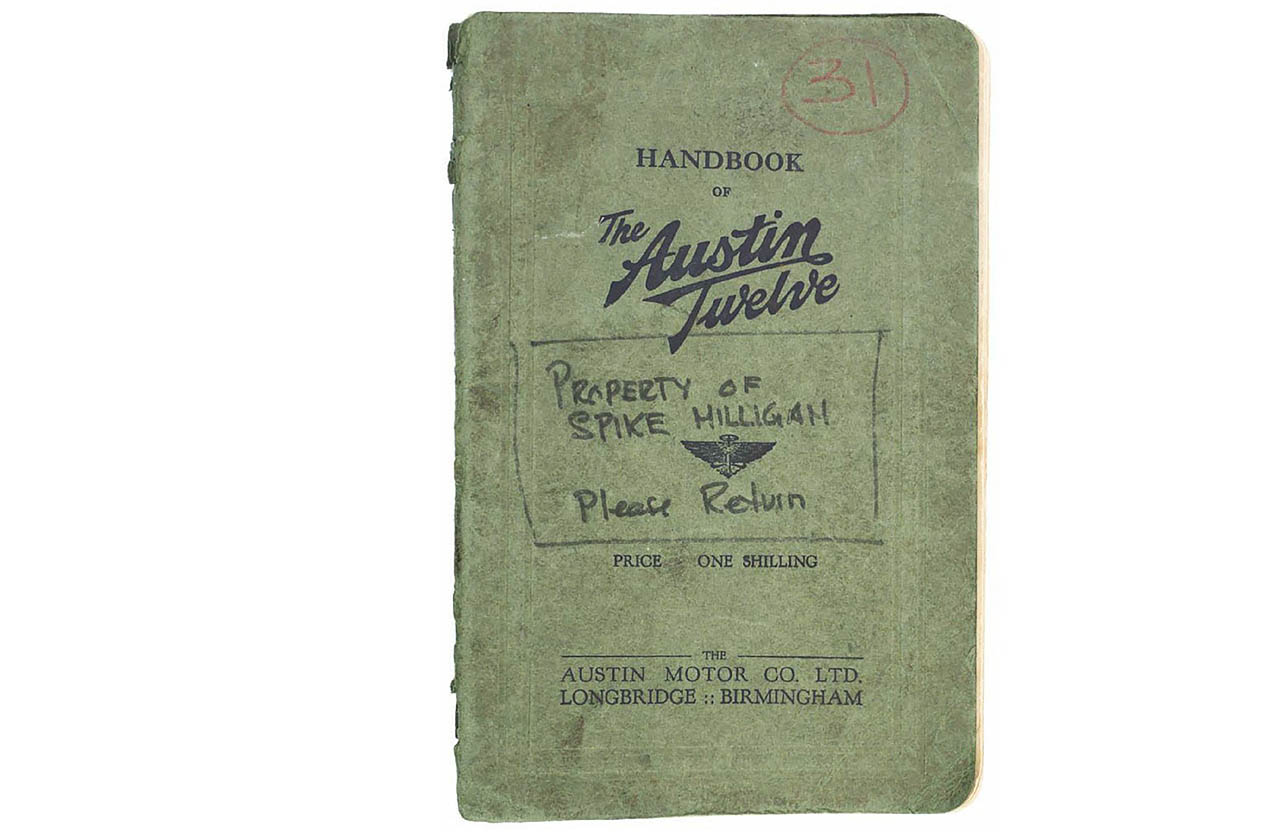 Clockwise, from far left: the restored Austin today, back to Sellers’ standards; Spike Milligan’s handbook; Sellers’ mercurial friend during one of his spells as custodian of Old Min.