The word ‘legendary’ is over-used these days. There are many great cars out there, many built by very capable tuning companies. However, very few cars can rival this one. Every one of the distinctive gold-liveried project cars that comes out of the Japanese tuning house known as Top Secret is special in its own way, however, this one is exceptional. The amount of work that’s gone into this car, the sheer number of components that have been upgraded, make it stand out even among its famous siblings. It represents Top Secret’s final, ultimate version of the JZA80 MkIV Toyota Supra. With unique bodywork, a huge 5.0-litre V12 engine swap, plus a twin-turbo conversion and nitrous oxide injection on top of that! 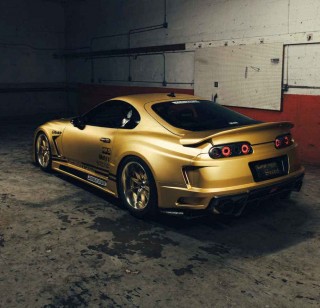 It was a car built out of frustration. The story goes that Top Secret’s boss, Kazuhiko ‘Smokey’ Nagata, grew tired of waiting for Toyota to build the next generation Supra, so he took a guess at the direction they might head and built this crazy monster. It was completed in time for the 2007 Tokyo Auto Salon, where it dropped jaws and caused many onlookers to scratch their heads. With the unique frontend, it didn’t even look like a Supra. What was it? How the heck did they cram that engine in the bay? And what car is that engine from anyway?

Few people would get rid of the popular 2JZ-GTE engine. In fact, Top Secret did build a similar-looking white car for a customer with a 3.4-litre 2JZ. Smokey loves an engine swap, though. He’d already built a couple of engine-swapped MkIV Supras, one with a 2.0-litre turbo 3S-GTE, just like the old JGTC racers. Another with a Nissan RB26DETT from a GT-R, much to the dismay of many die-hard Supra fans on the ’net. However, the ultimate Supra needed a special engine and it got one from a very unusual place.

The 1GZ-FE engine under the bonnet was lifted from a MkII (G50) Toyota Century, a four-door luxury saloon that was only sold in Japan. Although it was only ever given an auto ’box in the Century, Top Secret managed to mate it to the Supra’s original Getrag V160/1 6-speed manual gearbox. Power is transferred through an ORC clutch and a Cusco 1.5-way LSD at the rear. Not only does this combination handle the power, it also helps the rear wheels distribute that power evenly.

Plus it gives the V12 Supra the long legs it needs for high-speed runs, which happens to be the main focus of this build. Considering the G50 Century first went on sale in the late ’90s (and only stopped production in 2016) the engine design of the 1GZ-FE is relatively advanced. It’s an all-aluminium, 4996cc V12 engine with variable valve timing (VVT-i) on both double-overhead cam cylinder heads. 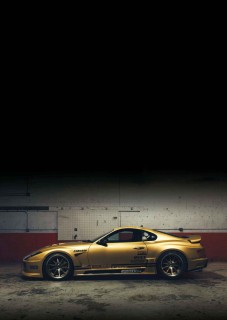 Interestingly, it has the exact same 86mm bore and 71.5mm stroke as the 1JZ-GTE. Meaning it’s like having two 1JZ engines stuck together under the bonnet. So you can imagine the massive torque this huge motor provides. Boost is provided by a pair of HKS GT2835 turbos, but when it came to mapping the engine, Top Secret came across a problem. They typically use HKS F Con V Pro management, however, this was only able to handle up to eight cylinders. The solution was to use two V Pro ECUs, one for each bank of the monster engine – this is actually how a standard 1GZ-FE operates, with an ECU for each bank. Smokey has been quoted as saying that of all the Top Secret project cars, this is his favourite. With over 900bhp and more than 745lb ft of torque, it’s easy to understand why.

Ultimately, Smokey is famous for his top speed runs. He traditionally kicks them off with a huge burnout, hence the nickname. One important factor is that he strongly believes in the concept of a street car.

That’s why this car has leather seats, satellite navigation and a decent audio system. In spite of this, Smokey is as addicted to challenging the 200mph barrier as he is from the nicotine hit from his trademark cigarettes, and he’s keen to get his speed fix wherever and whenever he can. He most notably got arrested here in the UK back in 1999, for hitting 197mph on the A1M motorway in a Top Secret RB26-engined Supra. However, he had even bigger plans, or more specifically even bigger numbers, in mind for the V12.

At the end of 2006, just a month or two before the car made its debut at the Tokyo Auto Salon in January 2007, Smokey shipped the car to the massive Nardò Ring in southern Italy. This was originally the test track owned by Italian car manufacturer Fiat, but it’s now a 7.8-mile test road used by the wider automotive industry. Smokey tasked himself and the V12 Supra with breaking the 400kmh barrier. That’s 248mph in English money. He accelerated the big Supra up to an impressive 358.22km/h (222mph) before backing off.

Apparently Smokey was disappointed with the outcome, suggesting the engine wasn’t making the power he expected. Sadly, he never returned for another go. No doubt the cost of transporting the car from Japan to Europe and back again was significant.

Even so, the V12 Supra proved it could accelerate to that speed in no time at all, and cruise there all day long. To make sure the engine stays cool at those speeds, Top Secret fitted a large radiator in the boot, fed by two scoops where the rear quarter windows were. There simply wasn’t space for it and the massive intercooler under the bonnet. After the Nardò attempt, the car went under the radar for a bit. It’s entirely possible that Smokey was tearing up the C1 Wangan in the car, but if he was, news never reached us over here in Blighty.

The next significant moment we know about is when the car went up for auction at the Tokyo Auto Salon in January this year. After much speculation it sold for 9 million Yen, just over £60,000. The new owners are TrapTeam in the USA, a small group of passionate tuner-car collectors based near New York. We managed to track them down and got hold of these fantastic photos from Brandon Silvera of the car in its new home. The years have done nothing to dull the arresting visuals of this famous car.

As you can imagine, this Toyota Supra is a unique piece of automotive history that is only going to go up in value. It documents a time when one of the most iconic figures in the global tuning industry trusted his imagination and turned an outlandish idea for the ultimate Toyota Supra into a reality. We’re glad it’s in the hands of people who appreciate it. We wouldn’t mind borrowing it for a few top-speed runs, although we’d have to start with a massive burnout first. Just how Smokey would like it.

Despite the high-speed nature of the car, top secret has fitted a set of roberuta cups to the suspension uprights. These allow the car to be raised up at the touch of a button, by as much as three-inches. Handy when transporting the car around the world, or indeed when climbing over speed bumps.

The project was tagged ‘TS8012V’, derived from the TS of top secret, the ‘80’ in the twin-turbo MKIV Supra’s JZA80 chassis code, plus the number of cylinders (12), mounted in a v-formation.

Nagata-san started working as a mechanic for Toyota in his youth. Shortly after, he moved away from home to Chiba and got a job with Greddy. His role at the famous tuning firm was away from the cars, packing boxes and sending products to customers.

However, he soon began staying after work, learning from and contributing to the work of the tuning experts that were working there at the time.

Eventually he began using the Greddy facilities to make his own performance parts at night, when everyone else had gone home for the day. After a while he was caught by the bosses, who decided not to sack him. In fact, they liked his work so much they even allowed him to continue making his after-hours parts, provided he didn’t tell anyone about it.

This is where the name ‘top secret’ originates from. some time later, Nagata-San set up on his own and has been building kick-ass cars and doing smokey burnouts ever since.

Trapteam are us car importers and collectors, based near New York. They aim to have the best inventory of specialist, high-performance tuner cars for sale, plus an impressive private collection. their current line-up includes some very rare R34 GT-RS, including a pair of v-SPEC II nur models, one built by HKS the other by Omori. They also own a spoon NSX-R GT that was raced at Macau by founder Tatsuru Ichishima. despite this impressive list of cars, TRAPTEAMIS only made up of four members: John Crowe, Joshua Quinones, Stephanie Cortes and Brett Layzell. You can follow their progress on facebook by searching for ‘trapteam’ or @trapimports. or jump onto theirwebsite www.trap.team 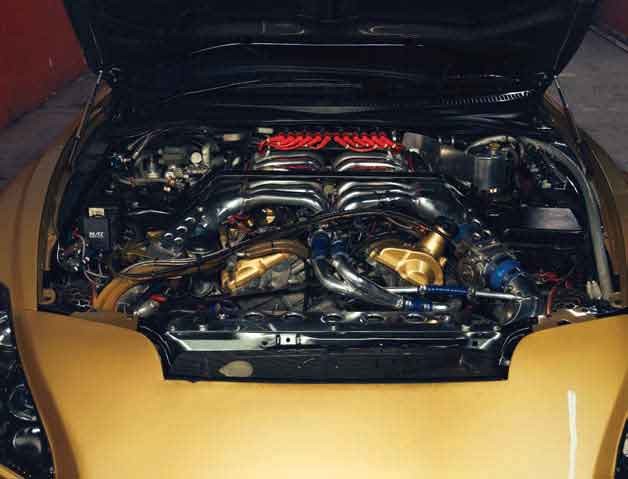 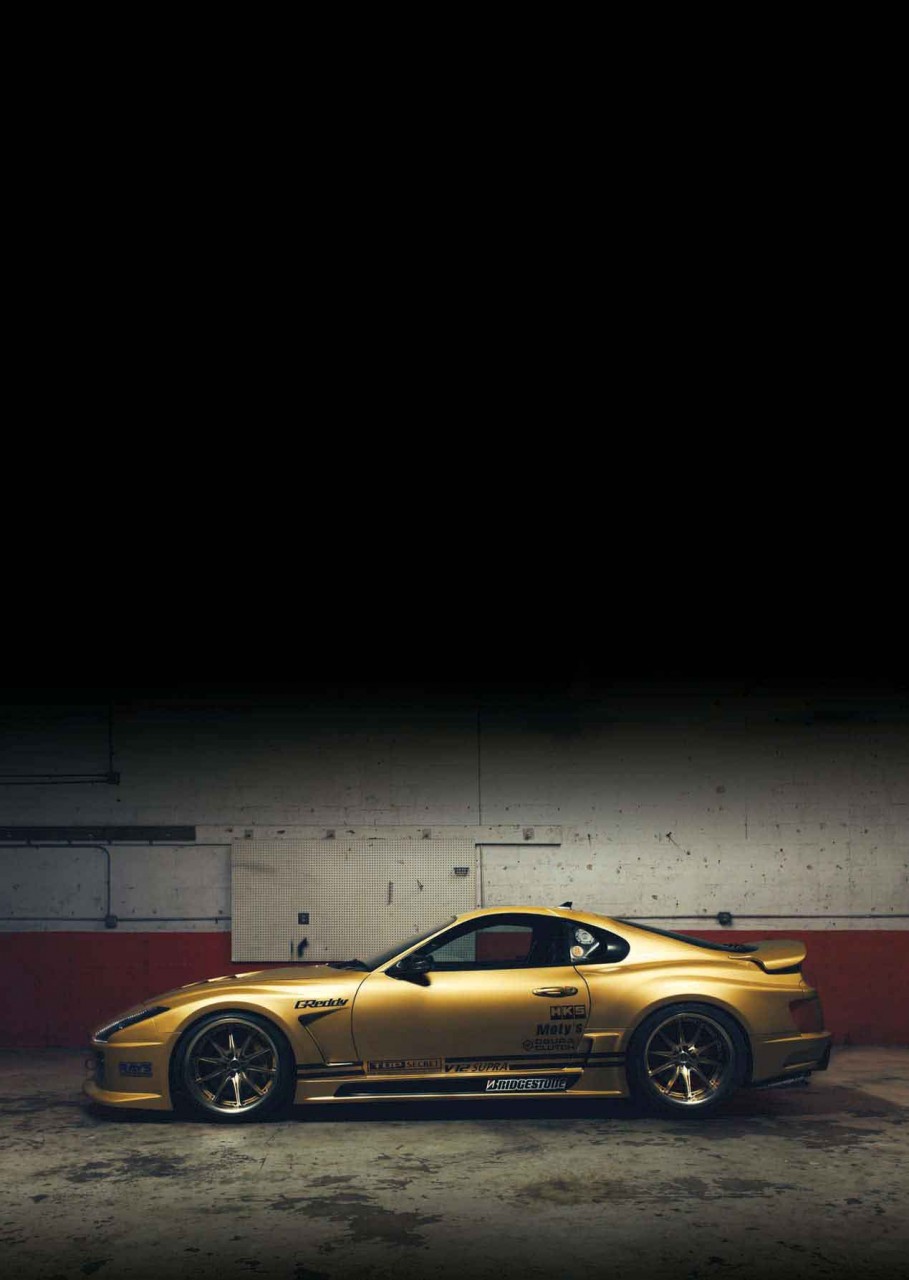 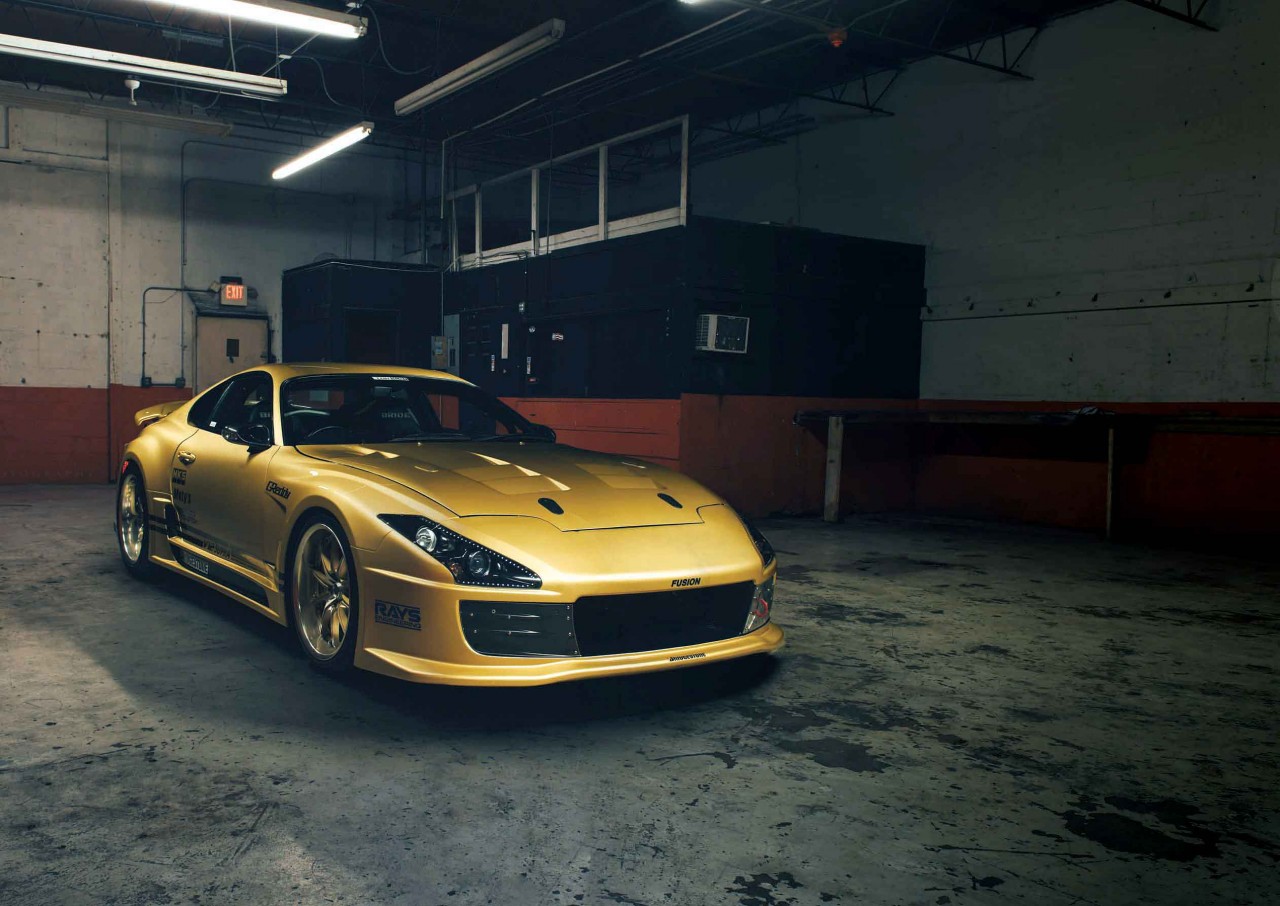 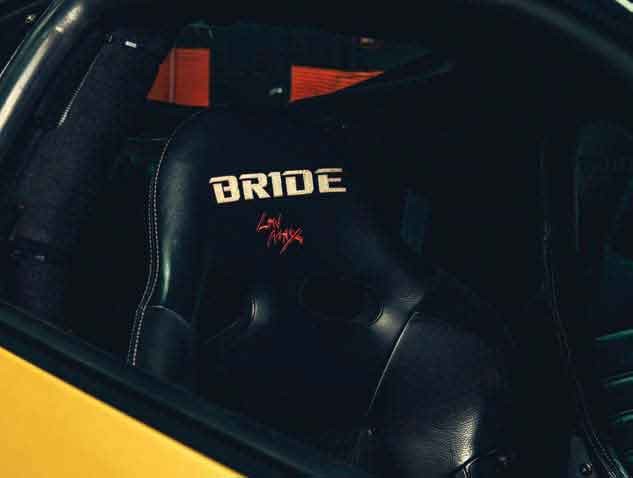 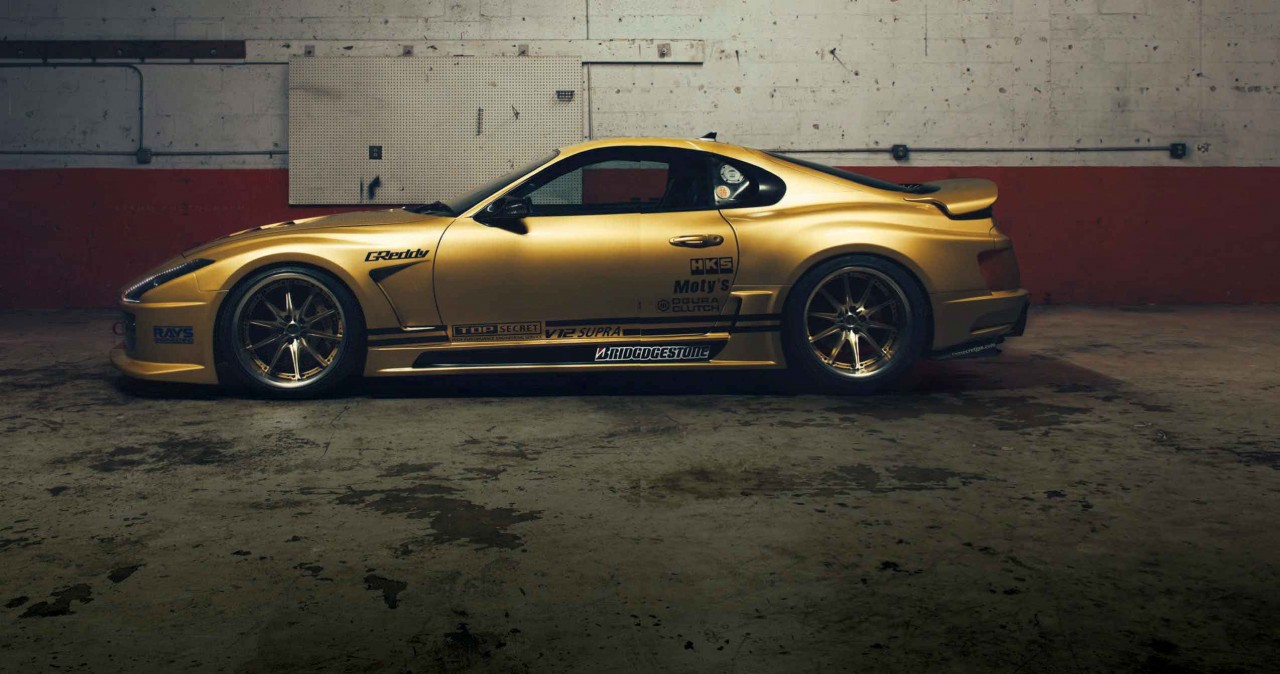 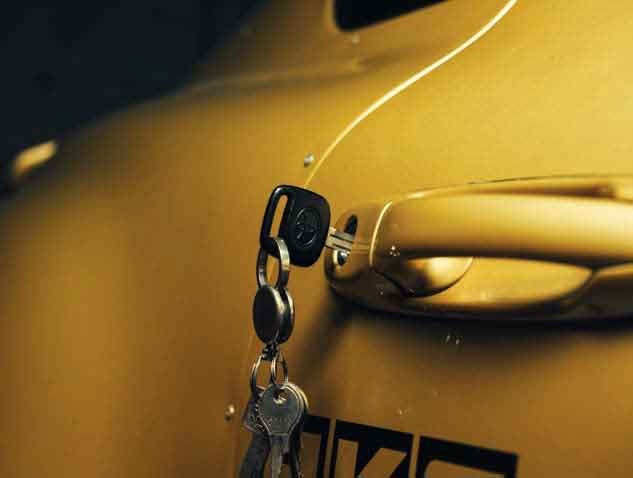 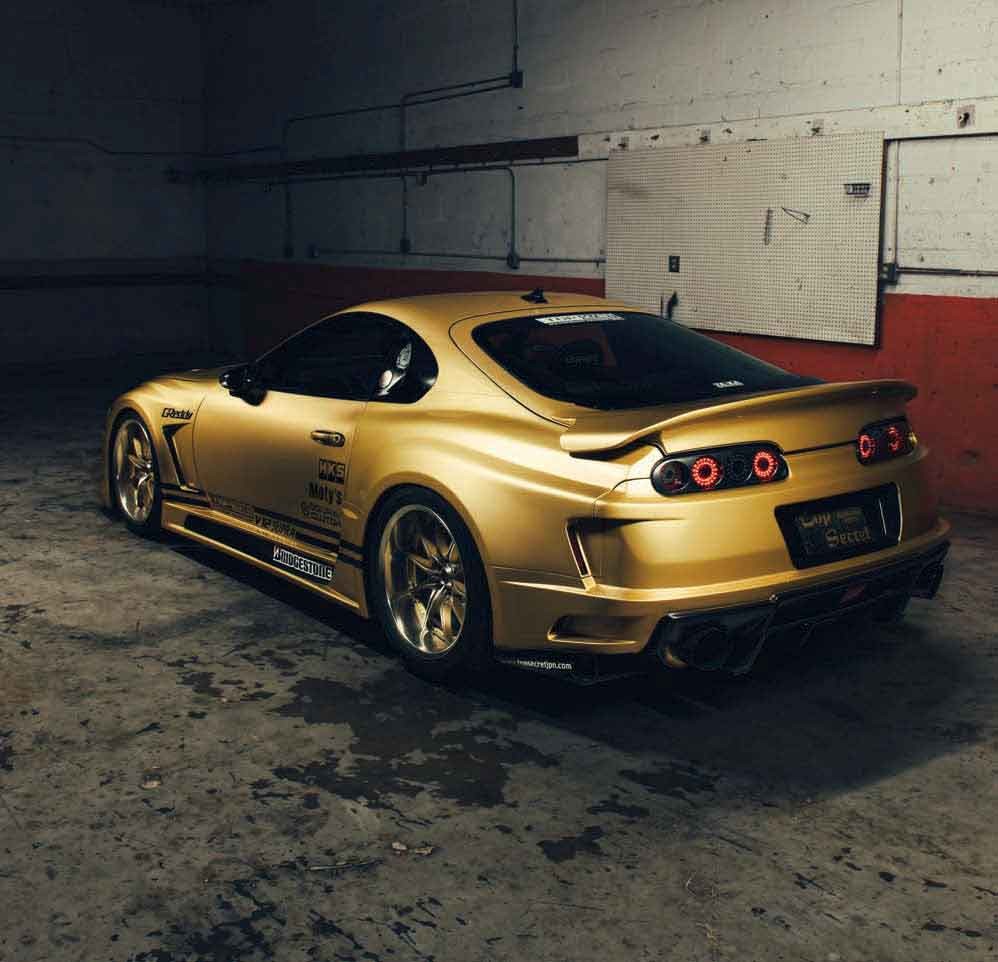 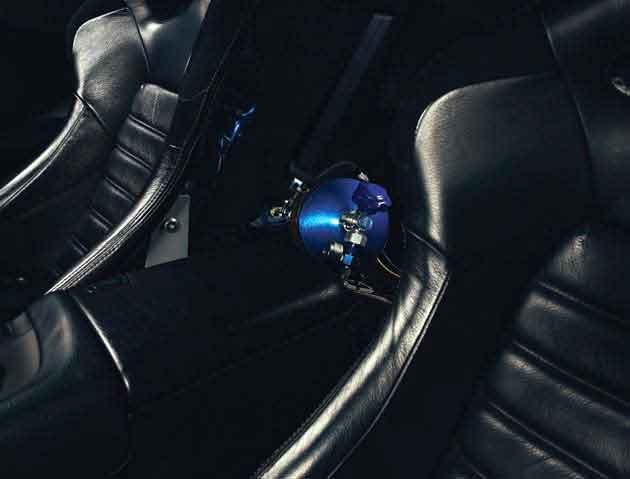 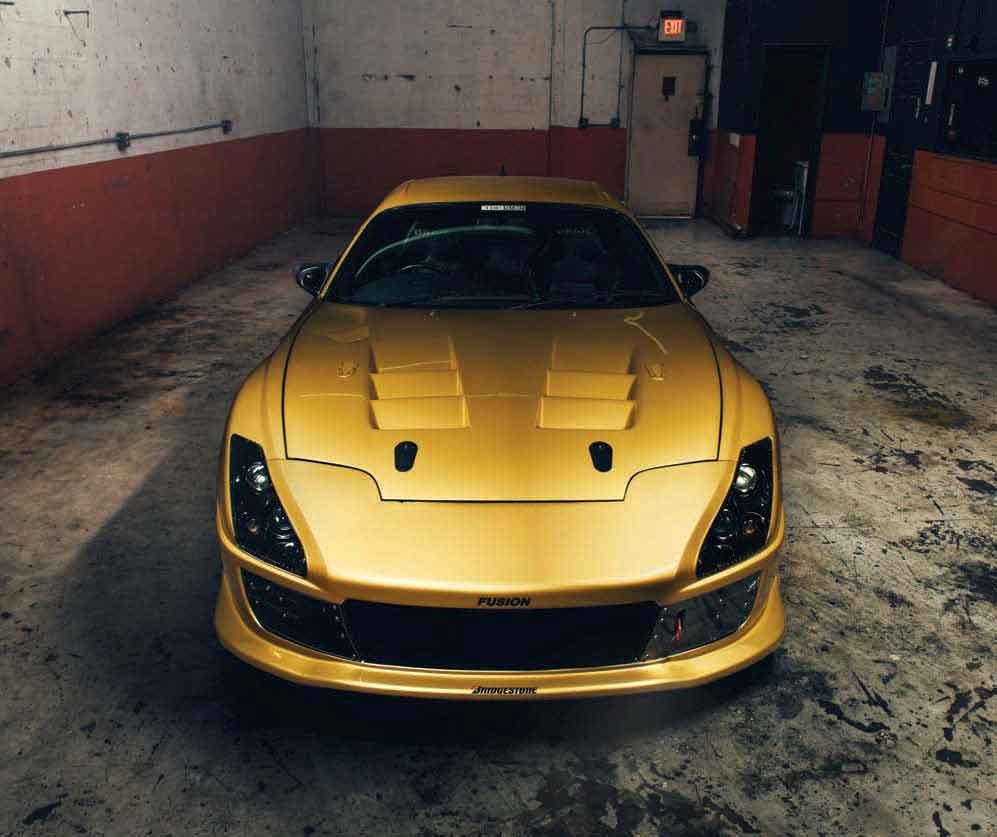