2019 McLaren Senna P15 Strap yourself in for six intense, brain-scrambling laps of Silverstone in a production-spec prototype of McLaren’s ultimate road-legal track car.

The first serious motor race I went to at Silverstone, ‘our’ track when growing up, was the then WEC equivalent World Sportscar Championship round of 1988. The era of Group C. Big cars, He-Man aero, even bigger power. Given I was a car-mad youngster, my life was never the same again after that day.

Today, as the McLaren Senna’s butterfly door clicks shut above my head, and the thud of the V8’s baritone exhaust blare instantly switches to a deep hum down the ear canals and a tingle in the back, that bitterly cold spring day in 1988 flashes across my mind: here I am, in a brutish, mid-engined machine, wraparound screen and pared-back pod of a cockpit, 789bhp under my right foot, bespoke Trofeo R tyres that, in spite of tread, must surely give a 30-year-old design of slick a run for its money, and an almost weightless carbon rear wing to rival the one on an AEG-sponsored Sauber-Mercedes C9. Gulp.

You’ve probably already read plenty about the Senna P15 – McLaren’s ultimate road-legal track car. Like most of us, you may have gasped, perhaps in horror, at the initial pictures, and shared a collective scepticism when those who had seen the car in the carbon seemed infatuated by it. I am of that camp: bemused on first acquaintance, but besotted having walked around it, understood the crazy shapes, and felt its presence. The Senna has stellar presence, just like its namesake had when he walked into a room.

We’re at Silverstone – the International circuit to be precise – to have a first ‘go’ in the Senna. This is not the main launch event, simply half a dozen laps in the car, but there are no cone chicanes, and while I have WEC GTE pro Euan Hankey sitting beside me, he’s there to advise, not to limit rev usage or top speed. Having suspended myself in mid-air across the sill and then fallen with as much grace as I can muster into the 8kg moulded carbonfibre seat – with cushioned pads in strategic places – I’m clamped in place, notably across the shoulders, and I clip in the four-point harness that the McLaren tech then pulls tight over the HANS device.

We’re in Race mode, with ESP off but some of the Senna’s traction-enhancing software on. I click in first gear with the smooth, engineered action of the right-hand paddle and brush the throttle to tentatively edge us away from the pit garage.

You don’t faff about when driving the Senna. Hankey has already briefed me about the brakes; that they don’t respond to being finessed – they’re about muscle power, confidence and, to some extent, aggression. The idea behind the Senna is that it, and you, are totally focused on the driving experience. This it achieves because there really isn’t much to look at inside, and more than that, there isn’t time to look around, nor to admire the scenery. As I squeeze the throttle to the stop in third gear the car sucks the road’s surface towards us and Village corner immediately beckons. Yep, that brake pedal is solid, but wonderfully reassuring at the same time, as if wilt and inadequacy are abhorrent.

Across the Link section, feel the car go light over the awkward bump and the rears get slightly agitated. Now guide the nose early into the right-hander, letting it then run wide as there’s room on the exit. Time, then, to unleash the full straight-line fury of the Senna. There is no pause, it’s already in the zone, and angry – angrier than virtually any internal combustion engine I can recall. I’m operating entirely by feel and sound: sensing the engine increasing in revolutions by the shift in harmonics, how at a certain rpm the V8 induces a fizzy twitch in my spinal cord, how the dorsal intake really sucks and screams as the red line approaches. Colours flash in my lower peripheral vision, which I take to mean ‘change up now, you fool’. I register a glimpse of 8000rpm, I think, possibly, and so it goes on, each gear taking less than you’re requiring to read a line of this story, the Hangar Straight a bitstream of grey and green. And Stowe is approaching.

Ah Stowe. A hero’s corner. Mansell’s corner. I don’t know how quickly we’re travelling, but fifth gear, that must be really fast, right? Resisting every last urge to brake, I leave it until what seems ludicrously late and then stamp on that left pedal. What follows is what separates the Senna from any other road car I’ve driven. The Senna just stops; digs into the asphalt like it’s drilled down to the hardcore beneath that old RAF runway and moored itself on giant iron chains.

I was too early. Far too early. Never mind. Guide the nose into Stowe. Don’t apex too early. Those attributes that we look for in a road car – the response, weighting and accuracy of the steering, the sense of balance to the chassis – all seem spot-on. I don’t once question their authenticity. It’s another big stop for Club Corner, where a trailing-in on the brakes reveals a wonderfully predictable sense of rotation, then out past the Wing building and the finishing line.

The Abbey to Farm Curve complex highlights the Senna’s other key attribute: aero – all 800kg of the stuff at 155mph. Dammit, with each lap I try to leave the gas on more, just breathing on the brakes and turning in earlier, even when that seems like a ticket to understeer oblivion, only to hear Hankey’s encouragement to push harder still on the entry. It’s the same at Stowe, which my left shoulder can attest to as it’s crushed repeatedly against the seat.

I’m leaving the braking that bit later, squeezing that cornering speed a bit higher. I know I’m nowhere near the limit yet, but oh man does it feel fast. Yet there’s something else: by the last lap I am getting tired. Or more specifically, the Mk1 eight-bit device atop my shoulders is starting, just slightly, to lose its grip. A missed apex here, an incorrect gear choice there. I am glad to pit – I need to digest everything, ruminate, then head out again. If only.

Yes, the Senna is mind-fryingly quick, but it’s the braking and cornering speed that astound. That, and the intensity of the experience. This validation prototype – VP736 – is ‘currently what we think will be production spec’. We’ll drive the finished article this summer. I may have just about calmed down by then. 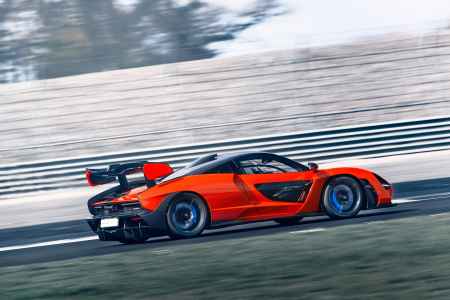 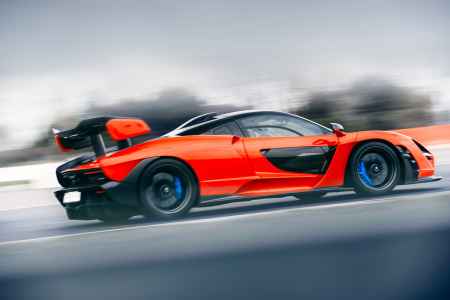 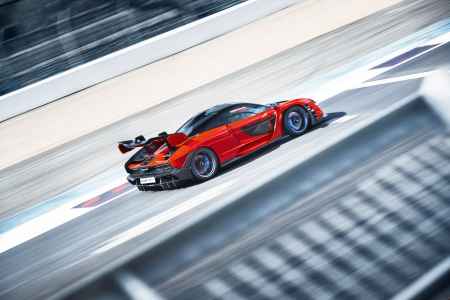 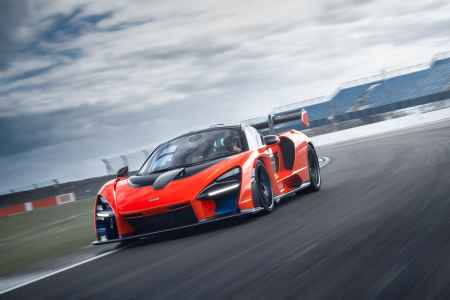 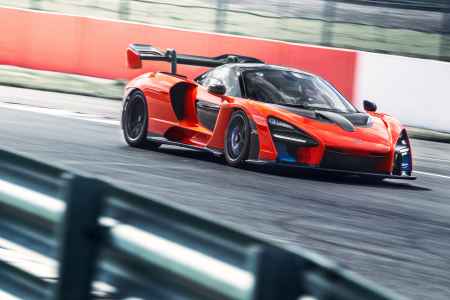 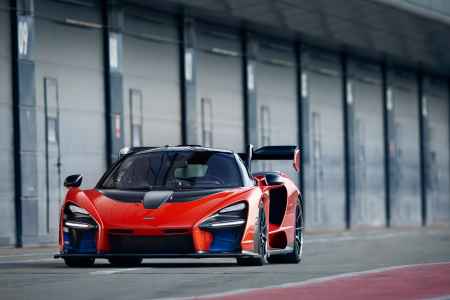 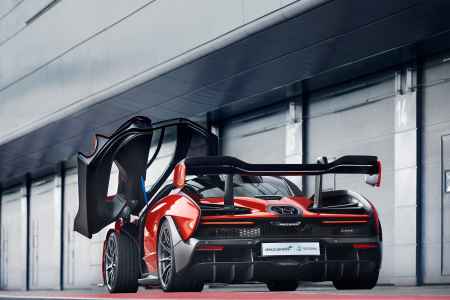 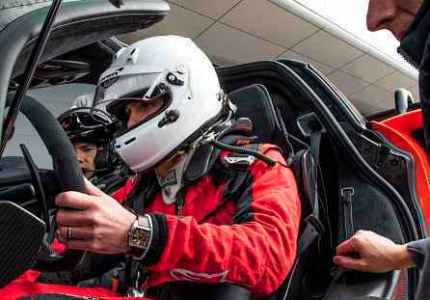 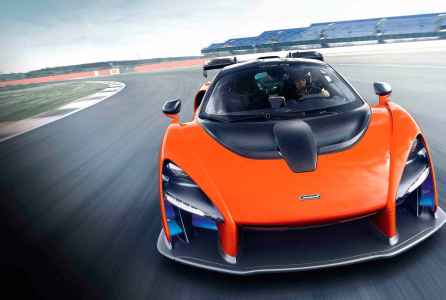 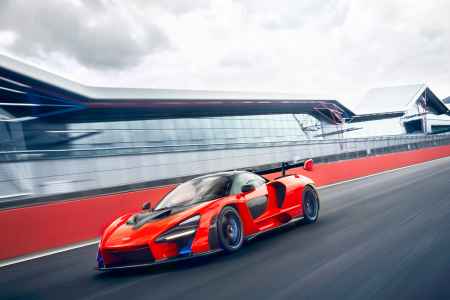 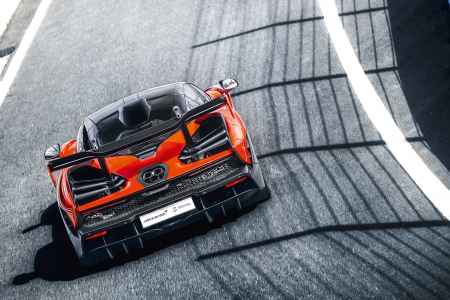 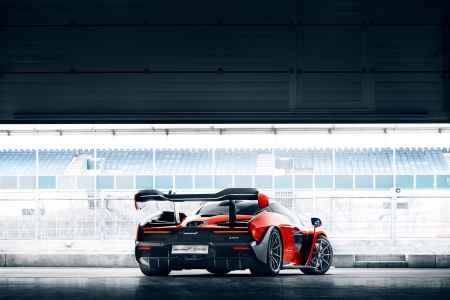 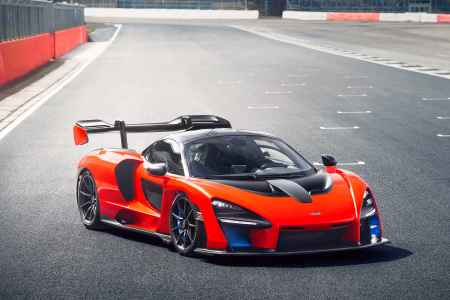 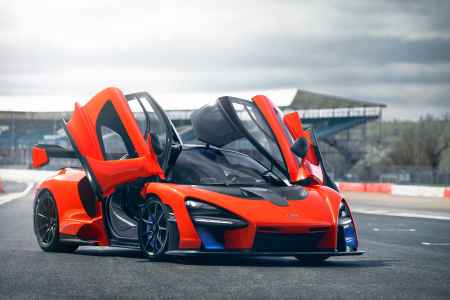 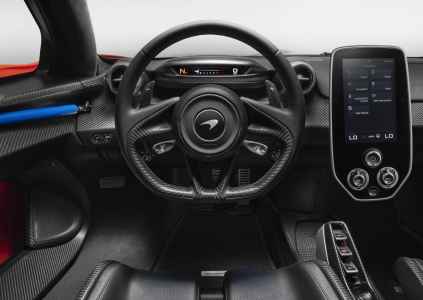 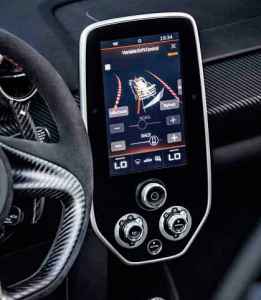 Above: Drive-My’s Towler is briefed by Hankey before heading out. Below and right: the Senna has the measure of F1-grade circuits such as Silverstone, yet it can be legally driven on the road, too

That Ford uses names of legendary Carrozzeria makers like Ghia and Vignale just to market its luxury version form its mundane cars will be always remembered by true car fanatics which anyway we despise this brand mostly...