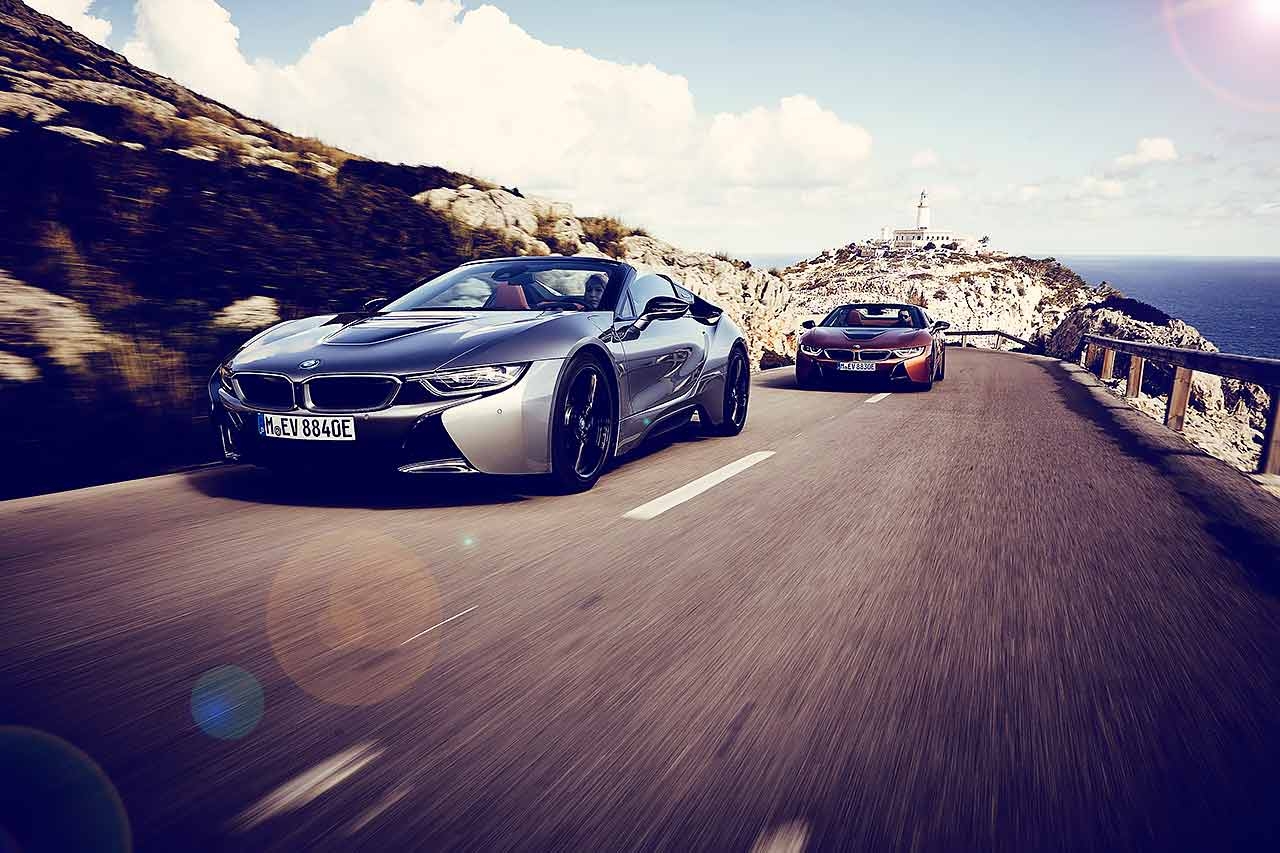 2019 BMW i8 Roadster l15 BMW has taken its cutting gear to the roof of the i8 Coupe I12 to create a car even more striking than the original. But is it as electrifying to drive as it looks?

BMW had no intention of offering its i8 as a roadster, but such was customer demand that the company’s engineers literally took a saw to the carbonfibre roof of an i8 Coupe I12 to see what would happen when they cut it off. Unsurprisingly, the carbon tub didn’t fold in on itself like a ’70s British sports car at its first MOT, and so the 2019 i8 Roadster l15 was born.

What followed was a development process never envisaged when BMW launched its plug-in hybrid coupe four years and 13,000 examples ago. While removing the roof was relatively straightforward, it did present a handful of new issues to overcome. Chief amongst these was airflow. The i8 coupe expels the hot air from its front-mounted radiators through a vent in the front bonnet, the air then flowing over and along the roof of the car and across the rear deck. Without a roof, that 70deg C air now headed straight over the header rail and into the passengers’ laps; great in the winter, less so in sunny California. So, the vent was plugged and the warm air redirected to exit through the wheelarches and under the car, providing a solution, but creating a new problem at the same time.

The combination of the redirected air under the car and the removal of the fixed roof played havoc with the airflow. The aero team suggested a fixed rear wing, but the designers sent them back to their drawing boards to think again. They returned with a revised rear diffuser and, at the front, positioned low behind the front bumper, a new spoiler, which combine to solve the problem.

Very little additional bracing was required for the tub, bar a few additional layers of carbon in the A-pillars and the windscreen header, while a plate was secured to the outer corners of the underside of the i8 to guarantee stiffness. The butterfly doors are also new, despite looking pretty much identical to the coupe’s originals minus the window frames. Yet this alteration brought a need for new hinges and amended weight distribution in order for the doors to stay open. Then there is the roof.

Neither BMW nor its customers wanted a metal folding roof or a lift-out targa-style panel. The former was vetoed because it would remove all luggage space (not that there’s a great deal to start with), the latter because storing it in the car would be an issue and leaving it at home not an option. Naturally, the soft-top that was settled upon is electric. It can open or close in 15 seconds and be operated at road speeds of up to 31mph, but it does mean the small, 991 911-style rear seats of the coupe have gone, replaced with a further 100 litres of luggage space.

Visually the i8 Roadster is arguably more striking than the coupe, upping the kerbside appeal as it delivers a hit of genuine design freshness, with the integration of the open roof harming not a single line on the car.

Coinciding with the Roadster’s arrival is BMW’s latest eDrive technology, which will be fitted to the i8 coupe, too. The significant change is to the battery pack, which remains the same physical size but with cell capacity increased and its energy capacity up from 7.1 to 11.6kWh. Primarily this is to improve the i8’s electric-only driving range (now up to 33 miles, from 20) and the speeds at which you can drive without the help of the (unchanged) 1.5-litre three-cylinder turbo petrol engine. But there’s also a mild, 12bhp power increase to 141bhp for the electric motor, which combines with the three-pot’s 228bhp to give a total of 369bhp. Torque remains at a strong 420lb ft. Despite an additional 60kg to move along compared with the coupe’s 1535kg, there’s little noticeable performance disadvantage.

The ability to drive for longer and faster – up to 70mph – under electric power is welcome, and with the roof open the sensations are heightened as a new wave of sounds that would normally be drowned out by an engine, exhaust note and tyre noise (the i8 still runs a narrow front and rear tyre) now wash over you. There’s a hint of Formula E about it, which petrol-power purists will most likely hate.

Select Sport mode, awaken the internal combustion engine, and it and the exhaust note add a layer of character that brings the sports car out of the i8. The gruffness of the engine is more small-capacity ’60s sports car than large-lunged ’90s behemoth, but add in the turbocharger’s chuff and puff and the i8 audibly encourages you to push harder than the coupe ever does.

With new spring and damper rates the Roadster grips, steers and changes direction better than the original coupe, too. There’s still little feel from the steering, but the front tyres work much harder before falling into understeer, and with the traction systems off, all four corners flow as one.

It’s no M-car, and it’s certainly no 911, but it is a fine roadster that delivers a unique and engaging thrill that few, if any, can match.

Above: butterfly doors, now frameless to match the open top, required redesigning for the roadster. Above: there’s little buffeting with the roof open and only a slight increase in wind noise when it’s closed. Left and below: E-Copper metallic and Donington Grey metallic are new colour options.

‘With the roof open, sensations are heightened as a new wave of sounds wash over you’