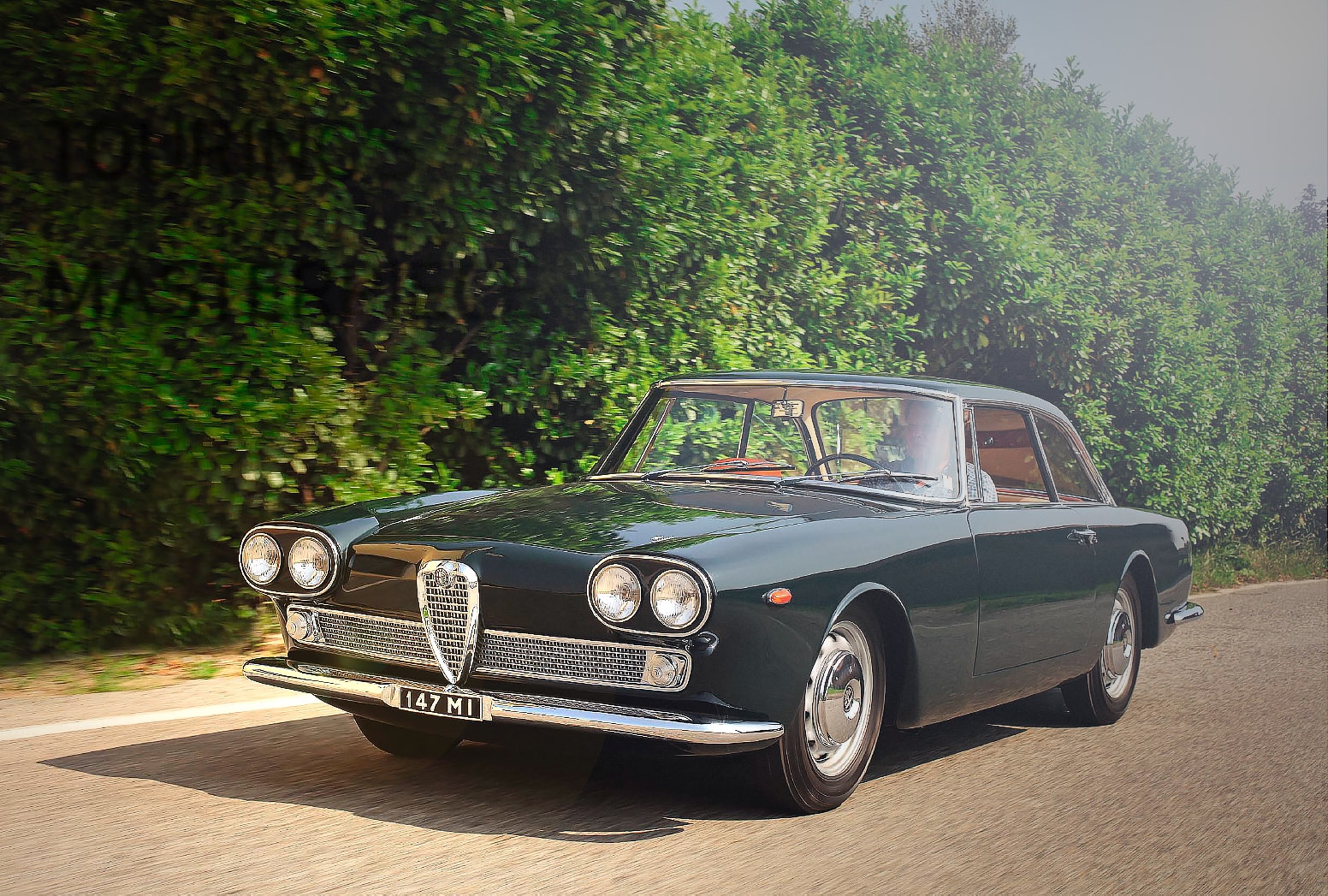 The great Italian coachbuilding houses have been sadly decimated since the ’60s, unable to face the challenges of a world in which car makers can competently design and produce even their low-volume models in-house. Back then this colourful industry was still very much in its pomp, made buoyant by the growing momentum of the Italian economic miracle (and its attendant industrialisation) plus a wealth of homegrown talent. Nowhere else could you find such a happy blend of artistic and technical skill when it came to styling and fabricating motor-car bodywork. So, when Touring of Milan unveiled this tasteful two-door offering named Praho on an Alfa Romeo 2000 chassis at Turin in 1960, nobody was particularly taken aback. Here was yet another exemplar of the Latin penchant for building great-looking cars with a seemingly unmatched effortlessness. 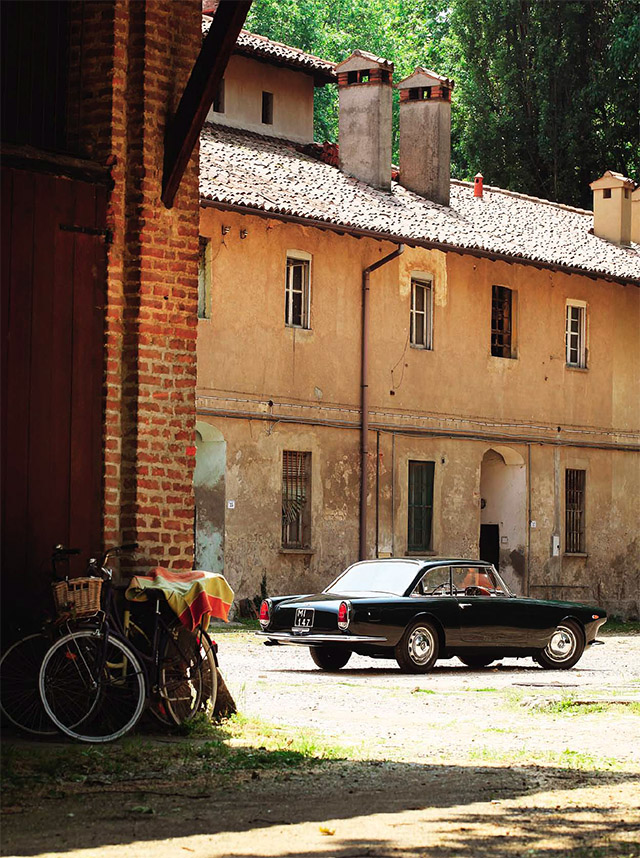 In fact, the elegant Superleggera aluminium coachwork was the latest in a succession of special bodies based on Alfa’s 102 Series platform, the shortlived four-cylinder precursor to the 2600 that would replace it two years later. With its cast-iron block and Al-fin drum brakes, its design was closely linked to the immediate postwar generation of 1900s rather than the firm’s cheaper and more modern 101 and 105 Series.

Vignale was at the same show with its own take on the quad-headlight 2000 coupé theme – it even built a short run of them – but the Praho was better looking, with a cool assurance that was always the mark of the best Touring designs.

Alfa had requested Carlo Felice Anderloni of Touring to create a new 2000 coupé for Turin in 1960 and he called it the Praho after the fishing boats that he had recently seen on holiday in Thailand. Doubtless this glassy four-seater would have attracted many approving nods from the show’s visitors. Perhaps some of them enquired if Touring would like to build them a copy of it, for it was certainly a clean and uncluttered shape possessed of an aloof and severe elegance that could only be Italian.

Yet, as lovely as the Praho was, it failed in its main task of persuading Alfa Romeo to switch its allegiance from Bertone of Turin – manufacturer of the 2000 Sprint coupé – to Touring of Milan, which already provided the bodywork for the 2000 Spider, and would continue to build the 2600 Spider. It would have been surprising if the decision had been otherwise: the Bertone Sprint was easily the best thing about Alfa’s range of curiously uninspired flagship models, and one of the defining GT profiles of the 1960s. In 1962, when the four-cylinder 2000 begat the much more potent 2600, the Sprint quickly became by far the best seller of the range.

The Praho, meanwhile, slipped into predictable obscurity and was quickly forgotten. Touring retained it until the firm disappeared in 1967, when it was bought by the Alfa dealer Minetti in Milan. At some point it moved to Hong Kong, by then with a silver paint-job, and it was not really seen again until about six years ago when it was acquired by the former architect and leading collector of unusual cars Corrado Lopresto.

The Praho still had only 700km recorded and was in superb condition except for the carpets. “They were the biggest problem,” says Lopresto. “It cost the same to replace the carpets with the correct type as it did to buy the car!” I am not sure that he is joking. We ponder over its features in the Milan sunshine. All of the glass is peculiar to the Praho, but the most unusual piece is the concave rear screen that gives the glasshouse the delicate touch of a Mercedes-Benz Pagoda SL hard-top. Lopresto tells me that he has a Touring-bodied Osca that’s similar to the Praho, although to me it looks like a much prettier variation on the Sunbeam Venezia that came later.

Ignoring this comment, he points out that the Praho – now repainted in its factory dark green – still wears its Touring ‘garage plate’ and that the seats, which have a novel system of airflow through them that was a typical preoccupation of Touring at the time, have the original leather.

Under the bonnet, the 1975cc, 115bhp engine – with its angled cam boxes – looks more like a Jaguar than the later and more familiar Alfa twin-cam engines. Apart from the cast-iron block and pressed-steel sump, and the less acute angle of the valves, the architecture is much the same as the Giulietta unit. The boot is massive and features more of that expensive carpet.

Mr Lopresto owns many delectable vehicles – he only collects Italian one-off cars, in fact – yet he seems to hold a particular affection for the Praho, which he displayed at Concorso d’Eleganza Villa d’Este last year, because of its timewarp patina and low mileage. “We don’t drive it because we want to preserve it,” he says.

I must be especially honoured today, because I have covered about 25 miles in the course of our photoshoot. It is a double treat because the 102 Series Alfa Romeos have eluded me in all their forms until now. All I have to compare it with is the 2600 Sprint and Spider.

Certainly, the Praho is a soft and gentlenatured Alfa in many ways, but seems closer in feel to a 105 Series model than the six-cylinder 2600, which invariably disappoints with its ponderous steering and generally soggy behaviour. The Praho at least has less understeer and roll than the 2600 Sprint, but is still rather a jelly of a car overall – with the emphasis on a comfortable ride that becomes counter-productive if you make any attempt to corner ambitiously. It is a car for the autostrada rather than the mountains.

Not that this matters, really. The sophistication of this bespoke interior – the sense of light, the feeling that the roof is almost hovering above the rest of the body, so pencil-thin are its supports – all of this disposes you more favourably to the experiences of driving the 2000 Praho before you have even moved away.

The central instrument display is the Praho’s showpiece and obviously aeronautically inspired. Apart from picking up almost every stray reflection going, it is a reasonable ergonomic success and a more memorable and pleasing layout than the arrangement in the Bertone production car.

A sliding glovebox is let sneakily into the side of the binnacle for driving gloves and sunglasses. This being a show car, everything is exquisitely finished and detailed plus, with so little distance covered over the past 52 years, the supple tan leather is gloriously unspoiled. The generous front seats – with curious chrome buttons – take up most of the legroom for what is otherwise a sensible-looking rear bench. The large windows make the Praho rather muggy inside, although the door glasses are regulated electrically so you can soon get some through-flow going. The twin-cam four-pot is willing and flexible, rocking the gearlever gently in its bladder-like gaiter at tickover but smoothing out nicely as you accelerate with a subtle, throaty warble.

The huge plastic steering wheel looms out of the dead space above the footwells where you have a clear view of your feet operating the floorhinged clutch and brake pedals. And you can easily blip the smooth, fairly short-travel throttle with your heel while squeezing the centre pedal with the sole of your foot. The drum brakes feel strong and balanced, plus the steering is lowgeared but fluid and not especially heavy. With its sweet gearchange, cosseting ride and great views all round, you can see how the Praho would have made a pleasing, if not earth-shattering, touring car for those who put exclusivity, style and opulence above ultimate handling.

These largely forgotten 102 Series cars from Arese were entirely symptomatic of Alfa Romeo’s growing disaffection with the luxury sector in the 1960s as its focus moved to nifty, practical cars with enthusiast appeal at affordable prices. Volume meant profits and it was increasingly happy to leave the connoisseur’s market in Italy open to Lancia and, perhaps more importantly, the likes of foreign invaders from Mercedes-Benz and Jaguar, which it knew could do the job much better. 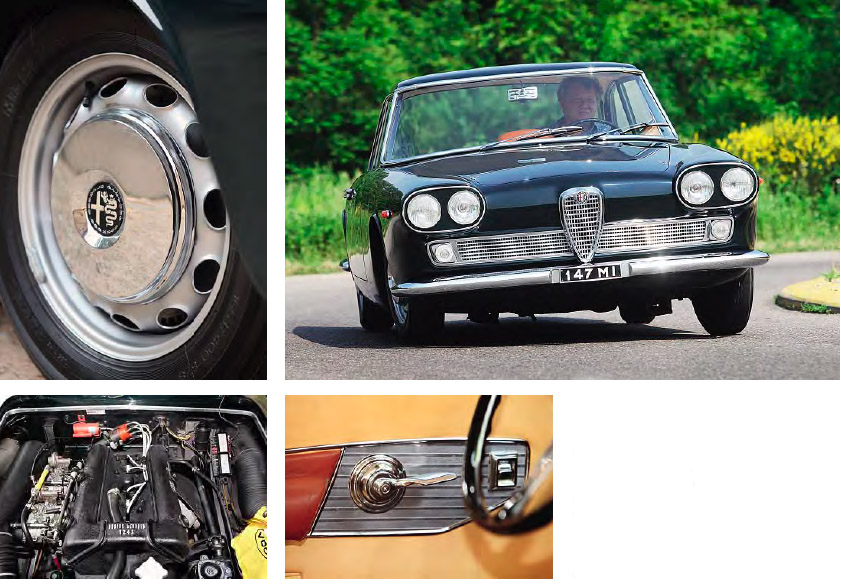 Clockwise, from above: supple suspension gives comfortable ride, but Praho leans if you press on; stylish details abound, such as delicate door latch and electric-window switch; twin-carb, twincam ‘four’ is eager to rev but struggles with 2600lb to push around; famous crest on perforated steels. 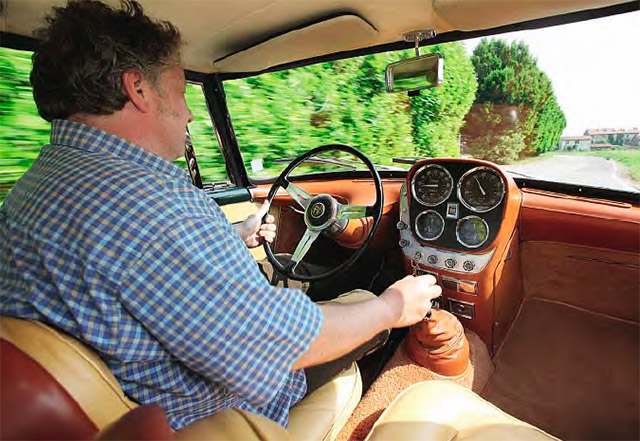 Clockwise, from left: concave rear ’screen gives an air of Pagoda to slimpillared cabin; radical centre binnacle holds all of the instruments and most of the switches – note glovebox in righthand side; signature Touring rear light cluster; beautifully appointed interior with soft leather.

IT COST THE SAME TO REPLACE THE CARPETS AS IT DID TO BUY THE CAR!’ SAYS LOPRESTO