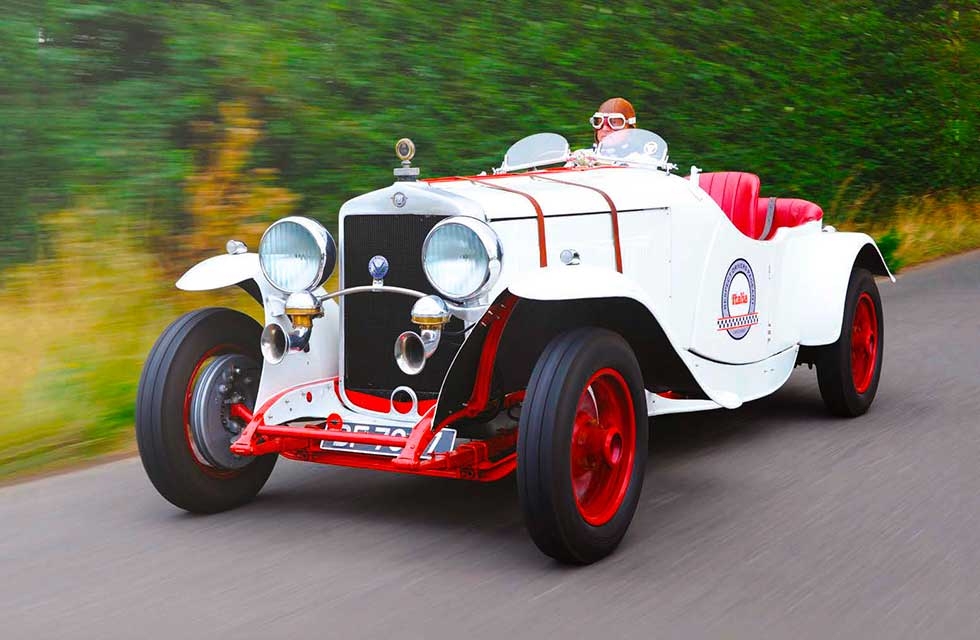 Flying Fiat. We get behind the wheel of a very rare Fiat 525SS, which sat very much at the top of the Fiat tree in the late 1920s Story by Phil Ward. Photography by Michael Ward.

Gordon Tulley owns this very rare vintage Fiat: a 1929 six-cylinder 525SS. The genealogy of the 525 family goes back to 1919 when Fiat launched its first post-war six-cylinder model, the 510. By 1925, it had built 13,500 examples with all sorts of body styles, including an enclosed saloon, an open tourer and a Coupe de Ville, the latter being a combination of both open and closed bodywork. A 510S version appeared in 1920 with power increased from 46 to 53hp – heady stuff in those days. The 519 series arrived in 1922 offering a range of higher quality cars, topped off with the 519S that developed 77hp at 2600rpm.

The 512 model appeared in 1926 as a development of the earlier 510 and featured improvements like friction dampers and front wheel brakes. Many 512s were exported to the UK and Australia as running chassis and were fitted with coachwork locally. While Fiat’s early six-cylinder engines were between 3.0 and 4.0 litres, the more affordable 520 series arrived with a new engine of a smaller capacity of 2.2 litres. The 521 of 1928, meanwhile, was a development of the 520 with a more powerful 2.5-litre unit.

And so to the 525, very much the top model in Fiat’s range. Launched in 1928, the 525 was powered by a new 3739cc, 68.5hp, six-cylinder engine, a direct descendant of the 3466cc of the 512. The 525 shared the 3400mm wheelbase of the 512, and luxury saloon and drophead coachwork was fitted by companies such as Weymann. One example was even presented to Pope Pius XI. Only 511 examples of the 1928-1929 525 were produced. In 1929, two additional versions were introduced, the 525S and 525N. The S featured a shorter 3000mm wheelbase and improved performance, with a top speed of 60mph. The 525N, which replaced the original 525, had a 3260mm wheelbase and featured a different final drive, smaller-diameter wheels and servo-assisted brakes. 1784 of these cars were produced and many were exported.

The world economic crisis in the 1930s killed off big-engined luxury cars and the motor industry downsized its top-end catalogue. By the time the 525S was dropped in 1931, over 2100 had been produced.

This figure included the SS (Spider Supercompressa) version of which, according to Turin, “only a few dozen were built” – including the car you see on these pages. The first chassis left the factory as 525S models and were then fitted with SS bodywork by various coachbuilders. According to historian Elvio Deganello, some were constructed by various Hungarian coachbuilders in Budapest. One was famously bodied as a coupe by Battista Farina in 1931 – in fact, this was the great man’s very first creation.

The 525SS was the most highly developed version of the 525, with power considerably increased from 68.5hp at 3200rpm to 88.5hp at 3350rpm. Top speed went up from 60mph to 74.5mph. The increase in performance was attributed to a raised compression ratio (hence ‘Supercompressa’) – up from 5.1:1 to 5.97:1, which may not sound great by modern standards but was significant in the late 1920s. In fact, the 525SS was a really innovative and fast car for its time.

In the 1929 Coppa delle Alpi, one of the biggest competition events of the era, a Viotti-bodied 525SS achieved a remarkable average speed of over 30mph through the Pordoi and Giovo passes. The following year, a 525SS won the rally with an average speed of 56mph across all stages.

Only four original Viotti-bodied 525SS examples are thought still to exist. A perfect black-and-cream car resides in Fiat’s historical collection, another concours black-and-green car is owned by an Italian collector, and another is believed to be in Scandinavia. A 525SS has also been replicated, based on a 525S, and is owned by the Australian collector, Peter Rumpf.

Then we have our featured car, which is owned by Gordon Tulley and lives in the UK. Gordon’s car is chassis number 201881 and Fiat archives record the car as a 525SS built on 7 November 1930 with engine number 103642, which is date-stamped 18 December 1929. Gordon’s search for the chassis number proved fruitless, until Augustin Banko, a Fiat restoration specialist in Australia, revealed where to find this vital information. It was discovered under several layers of red, blue and black paint on the extreme end of the driver’s side chassis rail. By the way, Banko was involved with collector Peter Rumpf’s project and they plan to create another 525SS in the Viotti style based on an unrestored 525S chassis.

It is recorded that Gordon’s car was one of two right-hand examples exported to Argentina in 1930. The remains of 201881 surfaced in a museum project store in Uruguay in May 1994. Gordon transported the rescued car to Malaga in Spain in July 2008, where it was returned to running order.

The original appearance of this unique right-hand drive survivor is unknown but given the original central tub, door shape and sill pattern, it was most likely built by Viotti from the design penned by Mario Revelli di Beaumont. While it has been recorded that Viotti built its aluminium cars with the offset dash, 201881 is an all-steel-bodied car.

The red leather and seat layout was probably a part restoration in 1994. The original Viotti seating layout was a three-seater with a bench at the front and a single central seat in the rear, with storage either side of the rear passenger. Gordon believes that 201881 has seats that are set too high and the floorpan needs to be reprofiled eventually.

During our photo shoot Gordon Tulley drove his old Fiat with great style and panache, making it look easy.

Then I was invited to drive the car on the return journey. It’s always a challenge when a trusting owner offers you the wheel of his pride and joy. I was relieved to find that the pedal layout was conventional and did not have the scary central accelerator of other 1920s cars, such as the Alfa Romeo 1750GS I have driven, where a momentary lapse of concentration and an emergency stop can have disastrous consequences. What I did have to contend with was the odd gearchange sequence. First gear is up and right where third would normally be, while fourth is where you would expect to find first.

Clearly the forte of the Fiat’s relatively low-powered but big capacity six-cylinder engine is torque. It’s a challenge to rein in the beast because it just wants to get on with business. The sheer grunt of the engine, the non-synchro gearbox and the wayward straight-line steering certainly concentrate the mind. Gordon has yet to fit shock absorbers to the car, so the suspension travel was mainly via the springy driver’s seat, the feeling of insecurity only marginally reduced by hanging on to the big steering wheel. Bounding down the narrow Lincolnshire fen road and avoiding contact with oncoming traffic was a lifetime experience. Thank you Gordon – I think!

Sidevalve six-cylinder engine was given a higher compression ratio for the SS – hence ‘Supercompressa’ name.