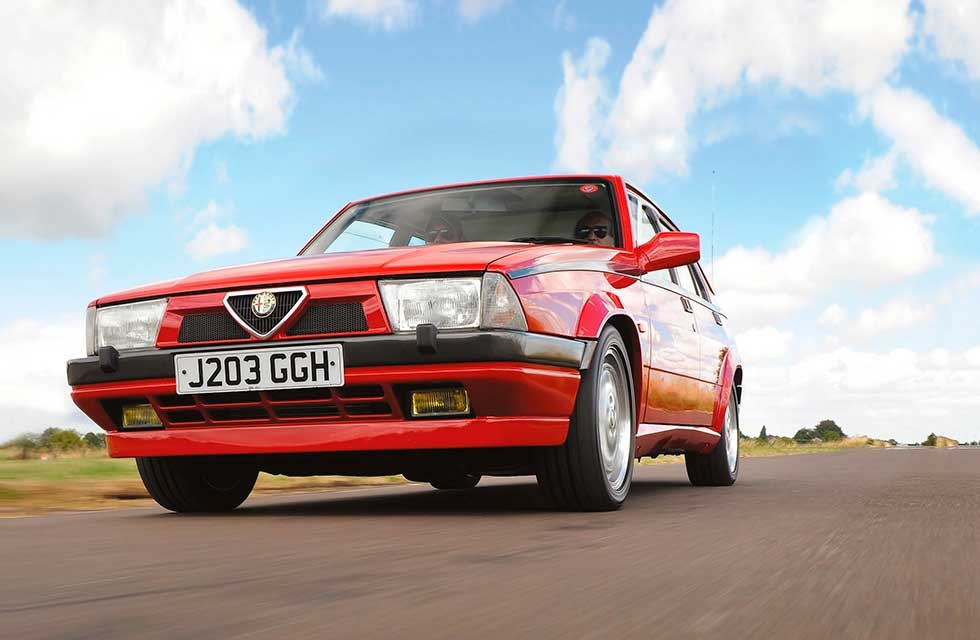 1991 Alfa Romeo 75 TS LE Tipo 162B Restored – and surely now the best in the UK. First Edition After a painstaking restoration, this 75 Limited Edition recently won the overall concours prize at National Alfa Day. And having just driven it, we reckon it could be the very best Alfa 75 in Britain… Words by Simon Charlesworth. Images by Michael Ward.

It’s not often you experience a design epiphany in a petrol station. Yet in the middle of all the abbreviations of motoring in 2018 – MPVs, SUVs, HGVs – a drop of blood-red Alfa ‘LE’ doesn’t just stand out, it makes everything else seem very banal and bloated.

Designed in 1985 by Ermanno Cressoni in a style christened La Linea, the 75’s look was an evolution of the nuova Giulietta’s. Mechanically it derived from the first of Alfa’s Tipo 116 line, the Alfetta. It was one of those designs that required thinking and understanding, because it was individual, architectural, and flirted with disarray.

I’ll be the first to admit that it took a while for the penny of comprehension to drop for me. Now, though, that appreciation has leapt to full-on lust, thanks to Daniel Tucci’s beautifully restored Twin Spark LE. After seeing and driving various Alfa 75s in modified, scruffy or neglected condition, walking around this prizewinning transaxle specimen – it recently won the overall concours prize at National Alfa Day – is like seeing the model anew.

“I bought this car as a mint specimen – it wasn’t,” smiles Daniel. “I had it checked over by Alfa Aid in Maidenhead – and they came back to me, telling me that it needed the engine rebuilding, this done, that done… Because it has quite a bit of history – it’s only a three-owner car – I decided to go to town on it. It’s been stripped and acid-dipped to find all the horrors, and we started again! It was a three-year process.”

So how many horrors were uncovered? “The rear wheelarch on the driver’s side was totally gone, there were holes in the front floor, massive holes in the boot, front and rear inner wings, as well as the front scuttle beneath the windscreen. Funnily enough, the front bulkhead was solid, but the A-pillar at the corner of the windscreen, that was gone. There was also a massive hole in the fuel tank.

“Instead of repairing it, we got new-old stock panels and a fuel tank which we found in Turin from a guy who had had them since the 1990s; they were very cheap because he just wanted to get rid of them… So that’s all we had to actually do. It wasn’t too much for a 75, let’s put it that way!”

‘Why?’ is perhaps the next natural question to be asked, but perhaps not when discussing the tumultuous relationship between Alfas and their owners. The first car Daniel ever owned was an Alfasud Sprint, which he got when 18, and that was influenced by his dad who had owned Giulia Supers since he was just four years old. “It’s just been Alfa Romeo through and through!” Daniel admits freely.

What certainly made this 75 worthy of such an exhaustive restoration was not so much its advertised condition but its history. “It’s a 1992 Twin Spark LE, and it’s either the UK’s last or one of the last two – Alfa couldn’t confirm which. It was built in December 1991 and came to the UK in June 1992.”

Anyone with a predilection for macchine rosse will already have a grasp of the challenges involved in restoring such cars, and this three-year restoration certainly presented its challenges. Daniel is quick to show his appreciation.

“Adrian and all the team at Alfa Aid have been incredible. Paul is the 75 specialist at Alfa Aid; he owns a few himself and he was over the moon to work on my car. He’s put an enormous amount of detail into it – he really took it to the next level. Adrian being the Alfa and SZ specialist he is, I can’t thank him enough because he had the car for three years. That’s three years of blocking a ramp or the car park – and we became very good friends through the rebuild.

“It went to the paint shop to be acid-dipped without the doors or anything – it was just a shell,” says Daniel. “When Adrian brought it back to put the doors on with new rubbers, he couldn’t close them. It was a case of ‘what do we do now?’ He ended up spending a lot of time on it.”

Mechanically, the 75 has been comprehensively overhauled and is beautifully detailed. The engine has been completely rebuilt to original specification – save for a slight rise in compression following the cylinder head being skimmed. If it isn’t new-old stock, then it has been sandblasted, powder-coated or painted with heat-enamel paint and polished. “It was basically a zero-mile engine in standard tune,” says Daniel, “and now it’s done about 900 miles. The head has been skimmed but we haven’t changed anything because we wanted to keep the originality. It goes a bit better than it used to because it has a slightly higher compression ratio and a full CSC exhaust system.”

The gearbox has been fully refurbished – from its internals to its casing. An uprated Sachs clutch has been fitted, a new bell-housing has replaced the original cracked one, and the powder-coated two-piece propshaft has been fitted with uprated rubbers.

“The gear linkage has been completely refurbished, although we haven’t gone for a short shift. The gearchange has a nice long travel because I like to double-declutch and I don’t like the short travel. It has new discs and pads – we left the brakes where they were, we didn’t move them out because it’s what was original. On the back and the front we’ve got fast road pads to make the braking a bit more efficient.”

As with any high-spec restoration, it is the minutiae that really make the difference – small details that can lead to an owner going blind scrawling through eBay. But Daniel came up with an alternative when it came to addressing the 75’s unmistakable but very fade-prone grey trim.

“The grey side and bumper trim, and the door handles, are the originals but because they were cracked, discoloured and horrible, there is a guy in Cornwall whom Alfa Aid uses for its SZ work. They went through a special process which uses a lot of silicone in the paint – because these bits crack over the years and it makes them smooth again. It cost an arm and a leg!” laughs Daniel.

But Daniel did not completely avoid the problem of ‘no longer available’ during his restoration and nor did he slavishly return the 75 back to complete factory specification. “The 16-inch wheels are from a 164 Cloverleaf – they are the Limited Edition wheels and are the same design as the 75 Twin Spark LE but they’re a bit bigger than the original 14s. In my opinion, with the original wheels, the car did not drive as it should. Wearing Michelin rubber makes a huge difference to driving the car.”

Refurbishing the 164 Cloverleaf wheels did raise an obstacle when Speedline refused to supply Daniel with the dummy bolts. “So we produced them ourselves in cast resin! It was, about, a three month process – all by hand,” laughs Daniel. “So yeah, it’s all done. I produced 175 bolts – the car takes 150 with the spare wheel – that’s 30 a wheel. I’ll never forget that!”

In terms of suspension, the bushes remain factory-spec, but the 75 has been lowered and uprated ever so slightly. It wears Eibach rear springs, Koni dampers, the front torsion bars have been lowered one click and it has an ES30 SZ front antiroll bar – all to help with its stance, to make it more planted and to boost its balance. As I’m about to found out after Daniel graciously offers me the chance to drive this splendid 75…

“The interior has original, unmolested, never-been-sat- in Recaro seats – front and back – as they came from the factory. As they were so good, I had fitted leather covers made because I don’t want the seats to get damaged as I drive the car. It is a bit of a faff taking the covers off, but you can if you really have to for a show. Or if I ever decide to sell the car.” Daniel’s emphasis on the ‘ever’ hints heavily that this is unlikely. “My wife has done the headlining and the all the trim panels – she makes corsets and clothes. So she’s done all the door panels, the gear lever gaiter, the centre armrest on top of the centre console, the headlining, parcel shelf and the C-pillars. She’s never going to do it again!” laughs Daniel.

Inside and out, it’s easy to see how this Alfa won its class and the overall concours gong at the 2018 National Alfa Day. Reputedly it scored a magnificent 98 points out of 100, with those two missing points being down to the boot shut lines refusing to stay lined up. “We had the aim to make it the best Alfa 75 in the UK for the simple reason that I think the 75 is very underappreciated.

I said that if we go to town with it, I want the car to be a symbol of what the 75 was when it came out. To celebrate it being the last Alfa – the last real Alfa before Fiat came along. I haven’t seen another one like this. I have seen good ones, but not like this.”

Sat in the driver’s seat with the engine running, I note that even the Alfa Romeo Control lights aren’t going disco-bonkers and are actually behaving themselves. On the move, this 75 exhibits all the handling panache, balance and poise you’d expect from a transaxle Alfa, but isn’t necessarily always served up. The variable power assisted steering is feelsome and nicely geared. The ‘Twink’ has a healthy appetite for revs – it spins past four, five, into the orange near six and close to the red at around 6250rpm. The remote gearchange is amongst the best in a 75 I’ve ever used. The exhaust gives the Twin Spark a zing, whilst the extensive use of Dynamat sound-proofing makes sure that there isn’t any heavy resonance at cruising speeds.

Test drive over, the big question remains: is this the best 75 in the UK? Although absolutes can tempt disaster, I have to say that I haven’t come across a better one.

“This 1992 Twin Spark LE is either the UK’s last, or one of the last two – Alfa can’t confirm which”

Owner Daniel Tucci has really bitten the bullet and gone for a huge resoration, effected by Alfa Aid. Twin Spark engine has been treated to a complete overhaul but has been left in standard spec. Isn’t that nice? A 75 properly restored to the full glory of how it came out of the factory.