Modifying cars is, on paper at least, a fairly straightforward affair. Want your ride to perform better on track? Grab a set of coilovers and a couple of bucket seats. Looking to win awards at your local show? Head to the air suspension department and grab a set of shiny split rims on the way. Simple. 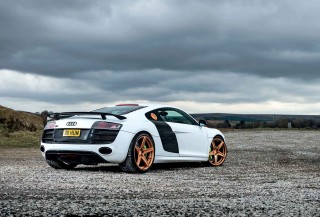 The thing is, in reality, it really isn’t that simple at all. Especially when you’re delving into the world of exotic supercars like lawyer Ben and his glistening V10 R8 here. Already boasting over 500bhp from its highly-strung mid-mounted engine and with curves to die for straight from the factory, surely it’d be too much of a gamble to play around with what already appears to be the perfect formula? Thankfully, by looking past any shortcomings and plucking up the courage and performing a raft of only the finest modifications, he’s now left with something even more special and unique than he started out with.

This isn’t Ben’s first foray into modifying cars. Far from it in fact. “I’ve had way too many interesting cars in the past to mention, but my current collection includes the likes of a VW 23-window Samba Bus, two tuned-up B5 RS4s, a couple of sporty Volvos and a Saab 900 Turbo,” he reveals, his impeccable taste for epic machinery shining through early on into our meet-up.

It’s perhaps this lengthy and well-grounded back-catalogue that helps explain just what a success story the work on his weekend toy project here has been, too. Picking up this first-generation example of Audi’s finest a few years ago, there was something about this particular car that meant it just had to be a part of his collection. “It was already sporting a Heffner twin-turbo conversion, with the work performed by QSTuning during its time with the previous owner,” he grins. 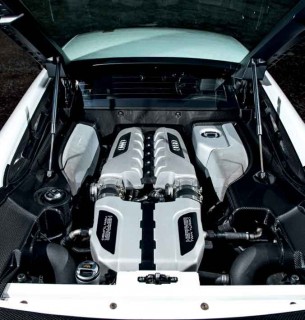 Famed for its relatively straightforward ‘plug-and-play’ installation and the fact it retains all of the driver-friendly characteristics this car is known for despite a huge power increase, the American-based kit utilises a pair of Garrett GT35R turbochargers, as well as all of the relevant pipework, wastegates, cooling and software needed to increase the car’s output to a frankly bonkers 861bhp and 626lb ft of torque – over 300bhp more than standard and with proven, warrantied reliability to back it up – what’s not to like?!

Despite the vastly greater power figure than standard, Ben is keen to illustrate just how well the car deals with a little boost. It’s a strange phenomenon – the roaring V10 growl not muffled in the slightest by the ‘chargers and performance seeming to improve on the stock car in every way whilst never proving too lairy to handle – it’s almost like being in a normal R8 that’s been put into ‘fast forward’ mode.

Aside from the well-packaged additions under the engine hatch, though, the Ibis White beauty remained completely stock, something which Ben was keen to change. “I wanted to put my signature style on it,” he tells us, aiming to signify that this was no ordinary R8 by adding some touches here and there to really make it his own.

First up were the practical upgrades: the sensible choice of adding upgraded carbon ceramic brakes into the equation to ensure the car’s anchors were still up to the job of slowing this thing down, as well as a Competition Clutch pack that was intended to help that R Tronic semi-auto ‘box transmit grunt in an efficient manner. “The clutch turned out a little too harsh for my liking, though,” Ben admits, explaining how the hardcore unit took some of the refinement away from the previously smooth gear changes. After liaising Heffner directly, the firm reassured him he’d be just fine with his stock unit, which eventually made its way back on. 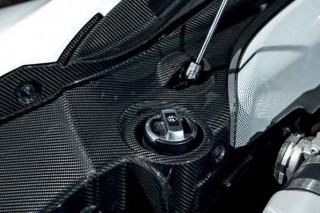 Cue the more personal modifications, then, which started with a set of prestigious American alloy wheel guru ADV.1’s finest forged offerings. These five-spoke 5.1SL puppies boast a 20in diameter and a colossal 12in of width at the rear, hailing from a company that specialises in aftermarket rims for supercars meaning they look spot-on under the R8’s capacious flanks.

Next up was to add some carbon fibre. In fact, an awful lot of it as it turns out. It seems Ben has a real penchant for this lightweight material, with parts like the spoiler, splitters and even the engine bay lining itself all being replaced for carbon fibre equivalents which contrast against that white bodywork nicely. Also sharpening things up are the LED-equipped GT-spec lights on both the front and rear that help bring this best bang up-to-date.

“I’d like to thank my friend Ayaz Malik for giving me the courage and support to carry out the next step of the build,” Ben keeps the tale going, next touching on undoubtedly one of the most unique aspects of the whole car – the bronze colouring present on the filler cap, wheels and in the form of that custom stripe that runs the entire length of the car. “On the wheels and fuel cap, the paint is peelable meaning it’s easy to return these parts back to standard. The stripe itself is an awesome touch that has ‘Heffner Twin Turbo’ in holographic writing in the middle,” – a really neat touch that looks more impressive the closer you get. There’s also the bright green hue now given off from the huge brake calipers – a bold contrast to the rest of the car that’s subtly mimicked with lettering dotted around elsewhere. 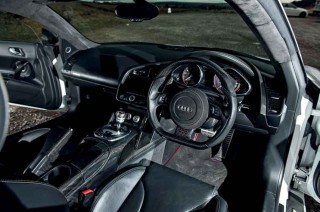 Inside, another swathe of carbon fibre greets you, perfectly complementing the otherwise fairly stock black leather interior, leaving Ben with a classy and uncluttered cabin to pilot this 861bhp monster down his favourite back-road. “It’s the perfect weekend escape machine!” our proud owner here smiles.

With one of the most powerful motors on British roads now neatly tucked away behind that rear bumper, Ben’s R8 is living proof that sometimes it’s worth doing things a little differently. With a lot of thought, he’s managed to add his personal touches to his pride and joy while remaining safely in the ‘classy’ side of the fence – no mean feat when so much was put on the line.

What’s next for Ben? With such a diverse taste in cars, his next project couldn’t be further away from this brute. “I’ve got to give me old VW Samba Van some attention,” he ponders. “I feel like going whacky with the colour scheme – because anything is better than stock!”

THANKS A special thanks to Ayaz Malik (painter extraordinaire!) who gave me the courage and support to paint the wheels and fuel cap in a peelable bronze and who designed the striping on the bonnet and roof 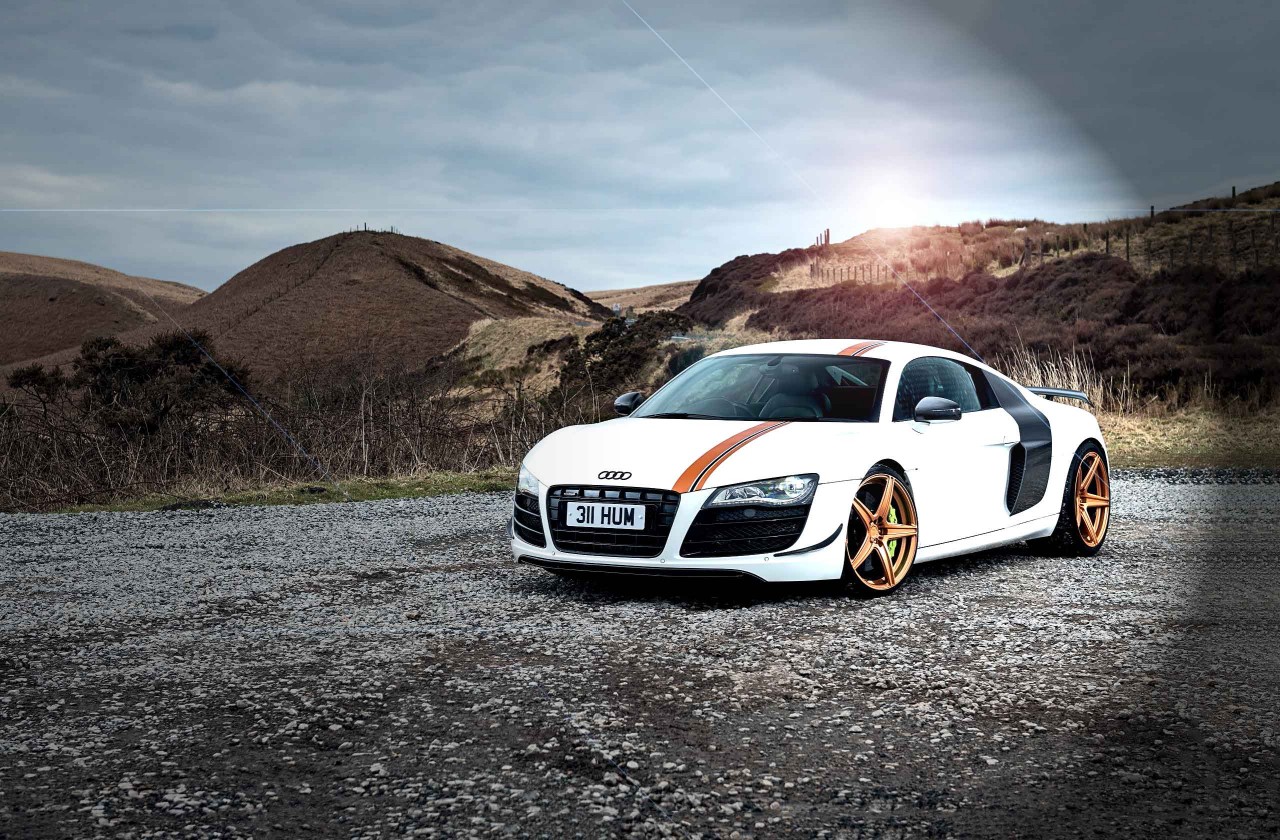 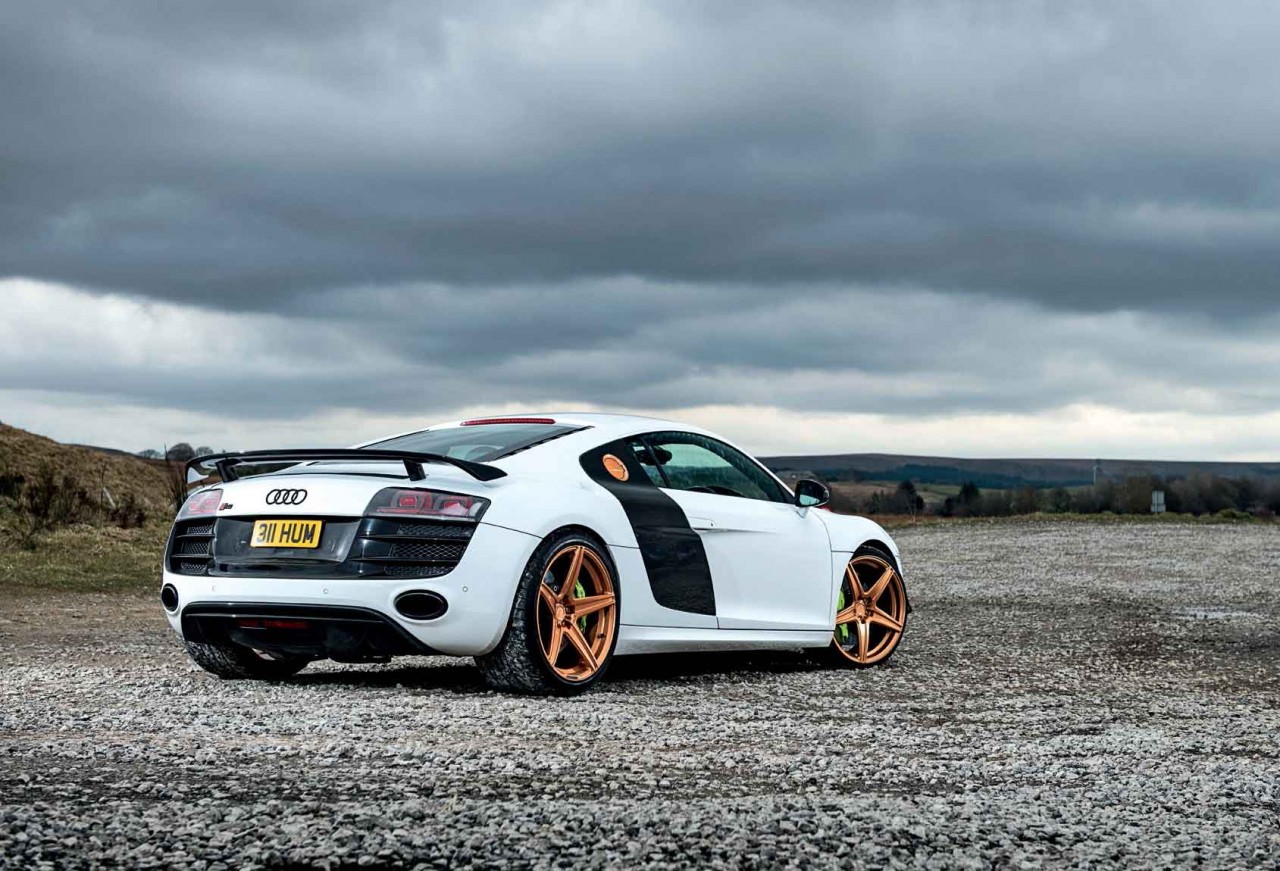 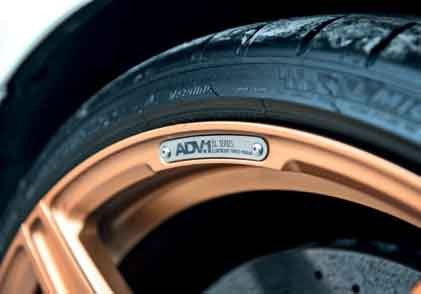 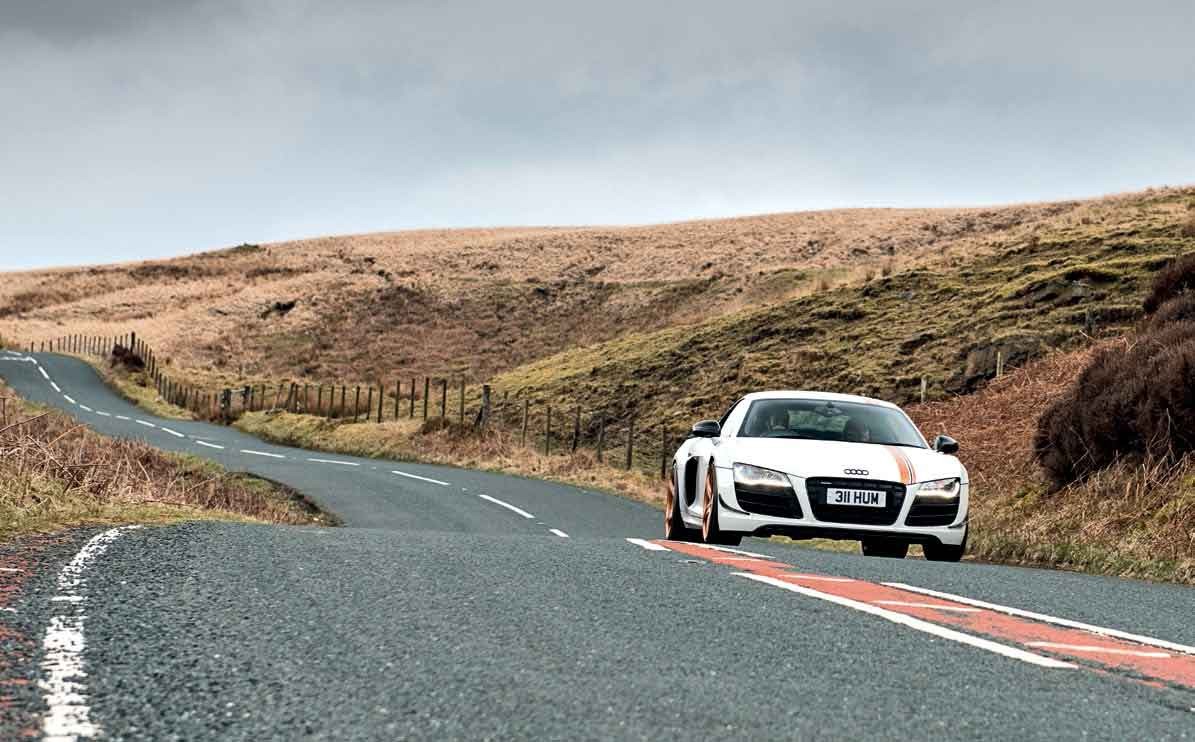 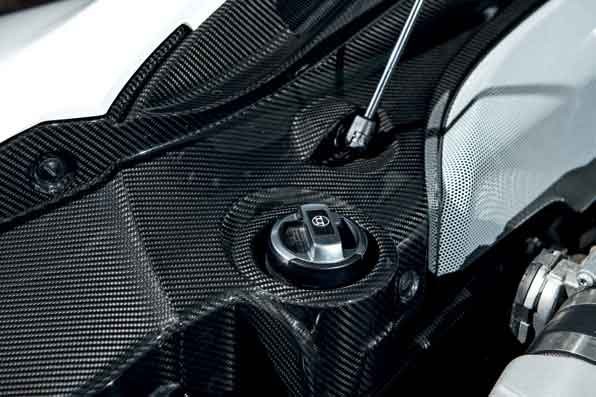 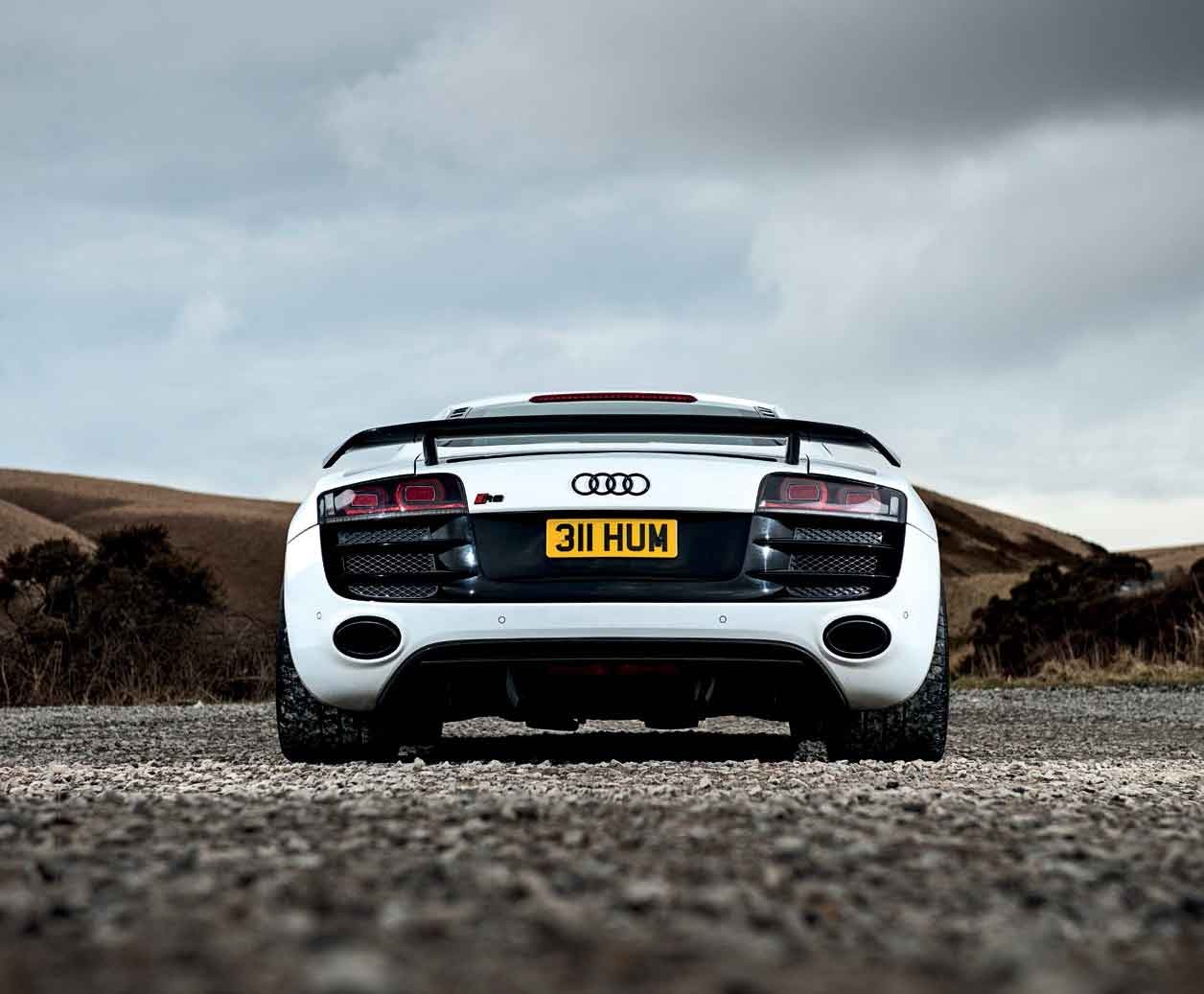 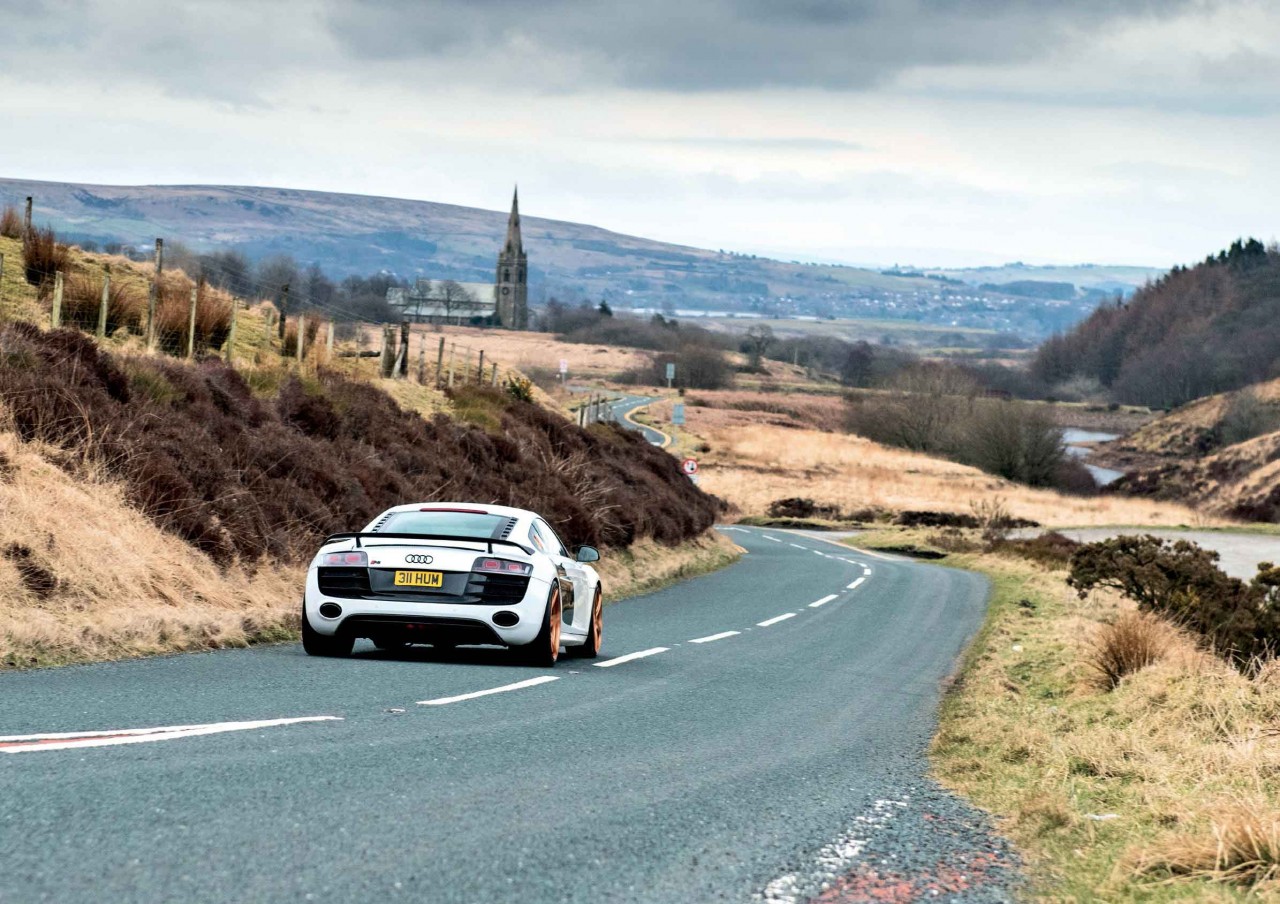 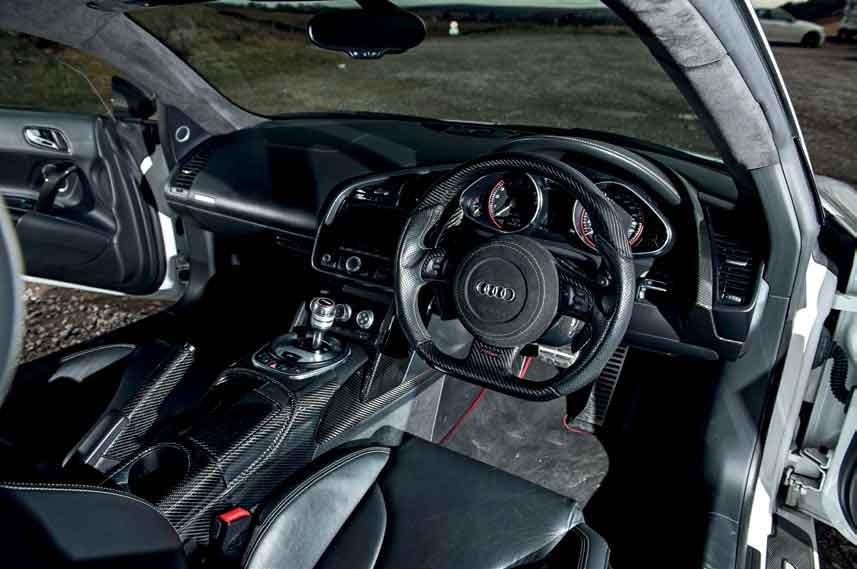 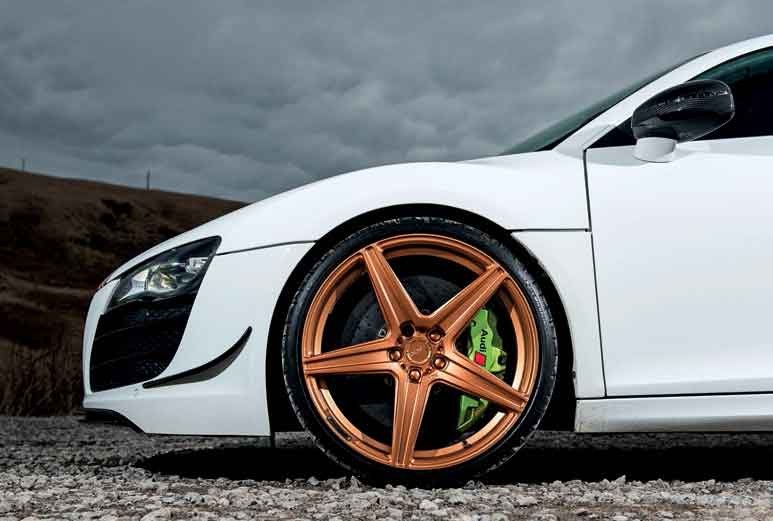 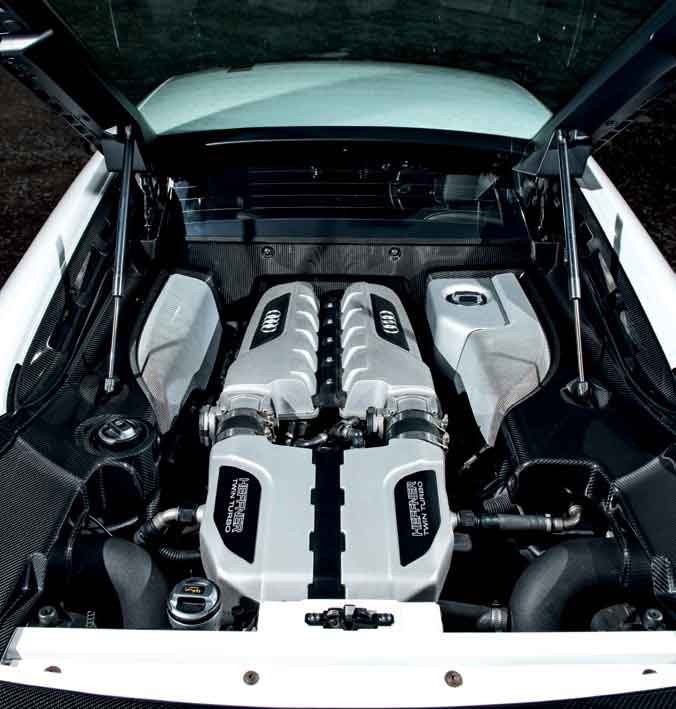 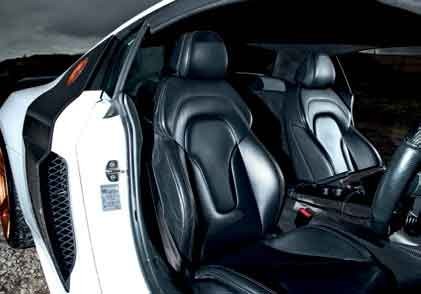 “it’s almost like being in a normal R8 that’s been put into ‘fast forward’ mode.”

ARE YOU A MEMBER OF ANY CLUB? Yes, various Volvo and Audi clubs