RETURN OF THE ROUSE

RS was packing a healthy 400bhp and was everything he’d wanted in a fast Ford. “I’d just bought it and had taken it home to do a few little jobs, when my mate called me to say he’d spotted something exciting on eBay.” It turned out that it was the original Rouse Sport – the car he remembered from his childhood. Now this posed a problem. 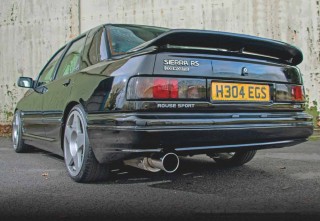 On the one hand he’d just got the car of his dreams, but on the other, he also had a strong emotional tie with the 304-R that had belonged to his dad. In the end, nostalgia won the day and he drove up to Wolverhampton to do a deal with the owner.

“The car had been in several different hands since my dad sold it, so it was in a bit of a sorry state,” admits Ryan. Many of the decent parts had been removed, although thankfully, the genuine Rouse Sport bodykit and interior was still all present and correct; can you imagine trying to source any of these bits today? “It’s said only 16 of these left, so they’re pretty rare,” explains Ryan. Clearly the years hadn’t been kind to the RS, so the first thing to do was tackle all of the issues, before the tuning could begin.

“We took it back to a rolling shell and repaired the rusty bits before my dad painted it,” says Ryan. It was lovingly coated in RS500 Black, which suits the shape of the car to a tee. “A lot of people don’t like the Rouse Sport kit and I have to admit, it doesn’t look right on white or Moonstone cars, but in black like this, it works.”

With the bodywork suitably refreshed and the all important Rouse Sport logos re-applied to the boot and side trims, the tuning work began in earnest.

“I wanted an engine that could make 500bhp-plus,” says Ryan with a grin, so I sent it to Hart Power for a rebuild.” A full complement of uprated goodness was specified, including Cosworth pistons, BD14 inlet cam and a bespoke T4 turbo with GTXR billet shaft. Add to this an RS500 intercooler, 3.5in exhaust and plenty of other upgrades and this YB was set for big numbers. “It’s probably running around 400bhp right now,” estimates Ryan, but it should be good for 500bhp – the only issue is the gearbox; I’m currently on number three, “ he laughs. With a penchant for shredding cogs, the only way forward is to fit something much stronger like a dog ’box, but with concerns about the cost and loss in drivability, it’s not something Ryan plans to do right now. Besides, 400bhp is still capable of putting a big smile on his face.

Although Hart Power took care of the engine build, Ryan has done most of the other work himself, ably assisted by some good mates and, of course, his dad. “One thing I’ve discovered is that when you own an old Ford, you have to learn how to fix it,” he smiles.

Now, given that this is a rarecar with its DNA linked to the halcyondaysof BTCC, some purists have suggested it should remain standard. But Ryan always planned on making the car his own and giving it a modern refresh. One thing you can’t miss is the wheels – they look huge, especially when the car’s viewed in profile. “It’s the only Sapphire on 8.5x18in Fifteen52s,” says Ryan, which sure helps it to stand out from the rest. The wheels are quite apt too, as this is car number 52 of the 72 304-Rs produced (just six 302-Rs were built). “They have caused some arch issues up front,” he admits, “the next job is to replace the Konis with GAZ coilovers to firm it up.” Take a peep behind the rims and you’ll spot the familiar letters A and P, which signify this RS is packing a set of six-pots with 362mm discs.

Aside from the wheels, the outside is period correct and looks stunning in its current highly polished state. “My mate at Dead Clean Detailing takes care of it for me and he does an amazing job,” says Ryan.

Inside, the wing-back Recaros are in fine fettle with an age-related patina to the leather that just feels right. “I had the drivers’ side bolster re-built using leather from a rear bench, but it’s aged now and blends in,” says Ryan. There’s also an RS500 steering wheel, plus a smattering of Rouse Sport logos on the dash and seats to remind you you’re in something special. Open the drivers’ door and the build plaque is there to see too. The only addition to the cabin is a quartet of AEM gauges, which Ryan admits were horrendously expensive, but look stunning.

It’s not only Ryan who enjoys the car either. “Everywhere I go, people stop to ask me about it or to take photos,” he smiles. “These days I only take it to shows and car meets; I wouldn’t dare leave it anywhere – imagine if an old dear reversed into it in a car park; that’d be it,” he says. That said, when he does get behind the wheel, he makes sure he enjoys it. “It’ll be locked away for the winter, then come out next year ready for the Spring Action Day at Castle Combe.” Two-and-a-half years of hard work have paid off and it’s great to see this rare Ford back in the Powell family, where it belongs.

LESSONS LEARNT FROM THIS PROJECT? Make you sure you set aside plenty of cash

WHAT’S NEXT I’m unsure, but there’s plenty to do!

THANKS Hart Power for the engine build, my dad and all the friends that have helped me along the way

“Everywhere I go, people stop to ask me about it or to take photos”

Custom T4 turbo is more than capable of producing 500bhp, but the engine currently runs at around 400bhp to protect the gearbox.

Wing-back Recaros have just the right amount of age-related patina. Trio of AEM gauges weren’t cheap, but do the job perfectly. Fifteen 52s are a bold choice on a Saph Cossie, but on this Rouse version they look spot-on. The build plaque certifies the car’s authenticity.