Our tried and tested MG Q-Type recreation, which in no way purports to be an identical replica, is a fascinating amalgamation of mostly period MG parts, but with a new aluminium bodywork, with stunning workmanship and build quality, by Classic & Sports Cars Essex, Ltd, at their Rayne workshop. This is a fresh build, completed earlier in the summer. 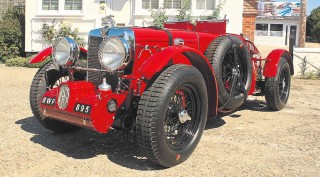 The car utilises a chassis from a 1938 MG TA together with the front and rear suspension set-up and gearbox from an MG TC, but is powered by a fully rebuilt MG XPAG four-cylinder engine, which has been bored out to 1300cc. It has also been lightened and balanced, ported and polished and fitted with a new sports camshaft running on unleaded petrol. This features a H8 two-inch SU carburettor and an Ogura TX 15 supercharger (built in Japan under license from Wankel GmbH) runs off the front of the crankshaft.

The all new aluminium bodywork was supplied by Compound Curvatures Ltd, of Nottingham. This has been painted in house by Classic & Sports Cars Essex’s Jason Waller using two-pack in Ferrari Rosso Mugello red. And the result is a magnificent concours finish.

The interior has been professionally retrimmed in Cherry Red leather, complete with doorcards and tiny, but most useful, armrests for the driver and passenger. A huge four-spoke steering wheel dominates the cosy cockpit, which has a full complement of instrument gauges, including an enormous rev counter, but is without a speedometer or odometer, which reflects back to the Q-Type origins of being a race car.

The panel with rocker switches on the left hand side are straight from a Supermarine Spitfire, as is the starter button! The car sits on 16-inch wheels, shod with brand new Blockley 5.50-16 6 ply tyres. There’s also a split tonneau cover and a small area for storage in the tail section of the body.

There are no doors to open, so it’s simply a matter of placing your right foot on the side step (which is secured to the chassis) then put your left foot in front of the seat and lower yourself into the driver’s seat the best that you can! No ignition key to worry about here; the start-up procedure for this car requires the electric fuel pump being switched on, then the ignition switch and finally pull the cover up and press that Supermarine Spitfire starter button! Blipping the accelerator pedal releases a very rorty exhaust note. It’s worth taking a few minutes to familiarise yourself with the cockpit layout and you find that the brake and clutch pedal are fairly close together. There’s a remote gear shifter and oh sweet joy, the gearbox is fully synchromesh, so no faffing around with double clutching, which would make this car infinitely more challenging to drive. The gear selection has a mechanical action and is relatively user friendly. We set off on the test drive and are immediately greeted with that exhaust note, which accentuates the higher revs when accelerating away. On a long run, ear plugs would be most welcome. We cling on to the steering wheel for dear life, the chassis/body build offers a reasonably solid feel to the handling, but there’s no getting away from overall vintage car driving experience, shake, rattle and roll, complete with heavy steering. This car has only covered 15 miles since being built; the supercharger kicks in at around 2000rpm and is presently limited to 6000 revs, with a maximum 10,000 revs. There’s a softish feel to the brake pedal, but they pull the car up well enough. The Brooklands aeroscreens do little in the way of protecting the driver against the oncoming breeze, so wearing some kind of head gear and goggles would be deemed de rigueur.

This Q-Type recreation scores very highly on aesthetic appeal from every angle, with fabulous attention to detail. It is to all intents and purposes at heart a race car, which is road registered and one in which you can have the most wonderful driving fun, once you’ve got accustomed to its various idiosyncrasies. Someone already well versed in vintage car ownership would master it fairly quickly, while a beginner may take an awful lot longer. A half hour blast will definitely raise your adrenalin levels, but you wouldn’t really want to embark on a long journey.