Trailblazer – The first Audi A3 8L – Andrew Everett takes a close look at the first series of A3s.

The A3 was Audi’s first small frontdrive hatchback since the demise of the Audi 50 some 18 years previously. Fuel was getting expensive, parking wasn’t as easy as it used to be, and the trend was turning firmly in favour of smaller cars. BMW had launched the Compact in 1994 to great acclaim – not so much by the motoring press but by the buying public who lapped the car up. 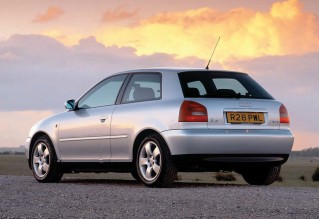 This is an interesting phenomenon – the Compact was in fact only £1800 cheaper than the regular 3 Series saloon E36, used the older semi-trailing arm rear suspension to save weight and money, and some of the interior trim was decidedly low rent. New and fashionable it may have been, but it wasn’t as good as the four-door.

Audi must have viewed this newcomer with interest, and if they were planning to launch the A3 with some Golf-quality interior plastics (not the best in the world) then they must have had a quick change of heart because, upon its 1996 launch, the A3 would be built and trimmed to the same high standard as the A4 – itself always a notch above the 3 Series.

The A3 was also Audi’s first transverse-engined car since the 50 and that did lead to some accusations of the car being an upmarket Golf; to some extent it was!

Launch models were the 1.6 and 1.8 with the 125 PS 20V unit, both available in SE and Sport models. The 1.6 used the 8-valve version of the regular Golf /Audi four-cylinder EA827 motor and it was available with an automatic gearbox. Model for model, prices were similar to those of the Compact, and above the Golf, but the A3’s superior fit and finish justified this and the car began to sell very quickly, generating impressive waiting lists that the Ingolstadt factory worked flat-out to try and meet.

Press reaction to the A3 was also very positive and one of the very first tests was by What Car? which compared the A3 1.8 with the BMW 318Ti Compact E36 and the Mk 3 Golf GTI 16V.

Performance and handling fell behind the 143 PS BMW and the 150 PS Golf, but the ride was felt to be better than both competitors. Showroom appeal is where the A3 scored, though – the facia was very similar to that of the A4 with the big red needle instruments, excellent quality trim and plenty of thoughtful touches and oddments space. It also had the biggest boot and the most interior room and, to cap it all, was priced at £15,858 compared to the £16,440 BMW and £16,390 Golf.

A fairer comparison would have been to the cheaper 8V Golf GTI, but the £15,500 100 PS 316i would have been out of contention. Anyone looking for a diesel hatchback would have bought the superb 1.9 TDI version with 110 PS.

Spurred on by the initial success, Audi soon began to expand the model range. By 1999, a five-door model had been launched and while it didn’t look as good as the three-door, it soon began to outsell it – and the customer is always right, of course. A 1.8 Turbo model with 180 PS was also launched, along with a long-awaited 1.9 TDI with the new PD (Pumpe Düse) engine with its variable vane geometry turbo and a choice of 90 or 110 PS. The 100 PS version arrived in 2001 along with the 130 PS version. A new A3 1.8T Quattro was also made available with the Haldex four-wheel drive system and a choice of the 150 or 180 PS units. 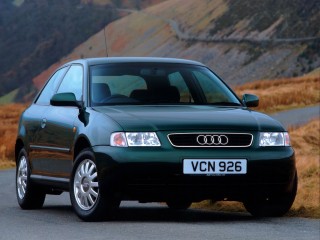 While it was called a quattro, it used a different system to the A4, A6 and A8s due to the transverse engine layout. The Haldex coupling system adjusted the torque bias from the front to rear as grip requirements changed, with the car being primarily front-wheel drive during normal motoring.

The 1999 model range upgrade coincided with the standardisation of split-folding rear seats.

2001 saw the A3’s facelift. This was confined to engine changes and cosmetic alterations, with revised headlights and tail lamps, an upgraded interior with changes to upholstery and switchgear, and the introduction of the 6-speed manual gearbox on the 180 PS 1.8 Turbo and the new 130 PS 1.9 TDI. In the UK, Audi’s Electronic Stability Programme (ESP) which combined traction control and brake force distribution was standardised on most models.

Production ended in 2003 with the launch of the all-new Type 8P model. We should also briefly mention the S3, a car that never sold in big numbers due to its price, but which was a fantastic car, way above being merely a hot hatch. This was launched in 1999 as a 3-door only and was powered by basically the same 20V 1.8 turbo engine and quattro running gear as the 1.8 T.

The power, however, was boosted by a bigger turbo to either 210 PS on pre 2001 cars or 225 PS on later ones which featured variable valve timing. As befitted the S3’s £28,000 price tag, it was well equipped with xenon headlights, electric Recaro seats and 17-inch Avus alloy wheels in the days when such features were big news. Many buyers opted for the optional 18-inch alloys and the Bose sound system. 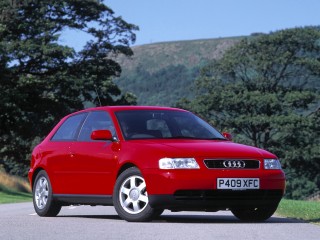 Today, the original A3 is still a sought-after used car, even at the banger end of the market where early examples can be found for well under £1,000. The build quality lifts it well above the likes of the Ford Focus, and the A3 still looks modern; I drive past a metallic purple 1.8 Sport from 2001 almost every day and it still looks a nice car and one you could park anywhere and not be ashamed of, despite its relatively low value.

Problems? The 1.8T engines are well known for the oil pick-up strainer clogging with black oil sludge, due to infrequent oil changes and many engines have met their end this way. So, if you have one or are going to buy one, make dropping the sump and washing it and the oil strainer out a priority – it is worth the two or three hours work. Many S3’s have had a very hard life and finding a really nice unmolested one with a low mileage and owner count is becoming harder.

In terms of the running gear, it’s all regular stuff that poses few problems and the front-wheel-drive versions are the most reliable. The 5-speed gearbox has the differential where the crown wheel is secured to the diff cage by fat steel rivets. Most are fine, but they can shear off and cause havoc – a large clunk and oil coming from a hole in the gearbox casing is a sign that this has happened. A good used gearbox is, however, very cheap to buy.

Rust was never a problem; the only recurring rust area is along the roof where the black strips for the roof rack clip in.

‘Today, the original A3 is still a sought-after used car, even at the banger end of the market where early examples can be found for well under £1,000’