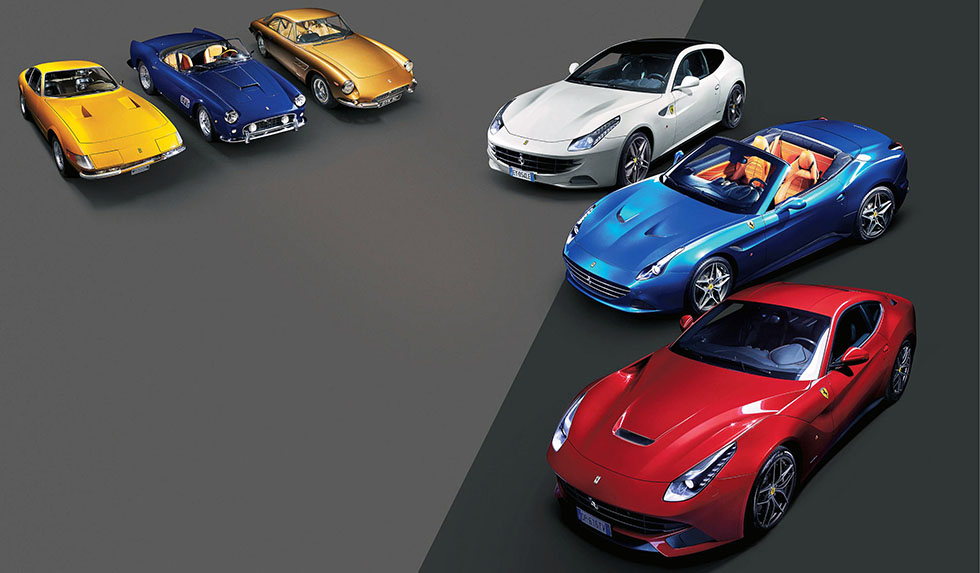 The oxen go in front and pull the cart, they don’t push it. Ferrari’s top GT road models remained defiantly front-engined until the mid-1970s, while the Company’s Formula One cars switched to a mid-engined format in the early 1960s. Following a lengthy hiatus, Ferrari has returned to this signature technical solution for the road, building on a formidable tradition of elegance and majesty.

Ferrari has a long and star-studded history of frontengined supercars, grand tourers and spiders, and the F12 berlinetta, FF and California T, leading names of Maranello’s current stable, all boast equally impressive ancestors. Today’s California T and the 1957 250 GT Spider California, for instance, share a lot more than a name and the facility for joyously exposing your head to the elements. Curiously, Ferrari offered two open-top 250s in the 1950s, both wearing Pininfarina clothes and both V12s. The 250 Pininfarina Cabriolet was based on the 250 coupé, the clue to its more subtle, grand touring role evident in its Cabriolet name. The 250 GT California Spider, on the other hand, was the brainchild of US importer and former Le Mans winner Luigi Chinetti, who believed he could sell a Ferrari convertible with a more sporting edge. The new bodywork was Sergio Scaglietti’s reworking of Pininfarina’s cabriolet. The resulting shape paid tribute to its cousin, but had its own unique characteristics.

The original California might look like an elegantly restrained tourer, but it had the soul of a racer, its chassis and mechanicals shared with the competition-oriented 250 Berlinetta. The visual links between the two were obvious, the pair sharing the long bonnet, short tail proportions that characterise front-engined Ferrari road cars. The California, however, wore a different windscreen to suit its more raffish role and quite often competed in road races, with multiple successes too.

Though only 104 California Spiders were produced, the car underwent five subtle evolutions (coach-built construction allowed that kind of progress) and this, coupled with owners’ requests for bespoke features, means that virtually no two models are the same. The biggest change came in 1960, with the wheelbase shortened slightly to sharpen the California’s handling, underlining its role as a truly potent sportscar. None of which overshadowed the different role played by the 250 Pininfarina Cabriolet. And today, echoes from the character of both these early open Ferraris can be enjoyed aboard the California T. A mere flick of a switch will raise the California T’s artfully articulated, element-shielding roof, or a twist of the steering wheel’s manettino switch will sharpen its already striking dynamic resolve. And, if you do tense the California T’s muscles, it loses none of its authoritatively calm way with the crests, dips and heaves of that mind’s eye winding road. It has great range, both of role and power. Its mix of systems and turbocharged V8 delivers effortlessly assured urge.

Daytona to the F12

By the late 1960s, the oxen were most definitely pushing the contemporary supercar. Rivals had adopted the mid-engined set-up with gusto, but not only did 1968’s Ferrari 365 GTB/4 Daytona shun this approach, it managed to do so while clothed in a Pininfarina designed body of paradoxically magnificent modernism. Powered by a mighty 352hp, 4.3-litre V12, the Daytona is still, for many, the ne plus ultra of Ferrari front-engined GTs. Today’s F12berlinetta channels its indomitable spirit, marrying a body of great aerodynamic sophistication with a 730hp, 6.3-litre V12. A worthy heir.

The snarling power of the 365 GTB/4’s V12 engine was a sensation when it was launched in 1968. The F12 berlinetta, Ferrari’s fastest road-going car at the time of its 2012 launch, is the Daytona’s muscular descendant.

Super fast, in all weathers

The revolutionary four-wheel drive Ferrari FF’s versatility means it can be used in all types of weather, on all types of terrain. Avowedly part of the front-engined V12 lineage, the FF incorporates an even greater degree of daily usability thanks to its distinctive fastback body design. Four full-size adults can sit within, and travel great distances comfortably and quickly. This epic interpretation of the Gran Turismo has its roots in the elegant 500 Superfast, a Ferrari whose 400hp V12 imbued it with unparalleled pace for its era. It was built in two small production runs, in very limited numbers.

The 500 Superfast was a strictly limited-edition model that appealed to Ferrari’s sense of exclusivity. The FF is equally stylish, but has been widely embraced by Maranello clients as a highly versatile, everyday drive.

The 1964 330 GT’s graceful, slim-pillared elegance didn’t appear especially bold back in 1964 and doesn’t look that way today, but the 330 GT was bold, and not just for flaunting the coming fashion for twin headlights. This was Maranello’s first proper four-seater, a gently stretched and fresh-sculpted successor to the 250 GTE 2+2. The 330 GT’s design admitted the need for some practicality close to a sportscar’s 4.0-litre V12, whose 300hp was reckoned to be excitingly understated, incidentally. Despite the necessary extra length in its cockpit, the 330 GT was as beautifully proportioned and able as its two-seater counterparts.

It also happened to be the favoured transport of one Enzo Ferrari, sometimes to drive, sometimes to be chauffeured around in. Il Commendatore was far from alone in enjoying the 330 GT’s sophisticated versatility. The 1,000 models that found homes during its four-year life emphatically proved the popular appeal of a four-seat supercar. It also donated its chassis to the car you see on these pages, the still breathtaking 500 Superfast. This car was built in vastly smaller numbers, its 36-unit production run echoing the Superfast’s status as a car for Maranello’s most elite clientele. An elegant four-seater, its Pininfarina body pushed aesthetic boundaries into unfamiliar territory, and it featured a number of emerging luxury grand touring accoutrements, such as a stereo system and air conditioning.

“Half a century later, the Ferrari FF is as bold and versatile as the 500 Superfast”

Now, half a century later, the FF plays a similar role, not only by providing four accommodating seats, but also for boldness. The FF is rare for being a shooting-brake, and delivers surprising versatility even over unusually challenging terrain, its front wheels providing flashes of thrilling traction when required. That makes the FF a complete car and a highly capable one too, as underlined by the fact that its 6.3-litre, 660hp engine shares its bones with the Enzo’s V12. It has the power and the legs that you would expect of a V12 Ferrari, compressing the 0-100km/h vault to 3.7 seconds and outrunning many light aircraft with its 335km/h maximum. Achieving that speed four-up, and padding securely over a snow-crusted road, gives you an idea of the car’s highly impressive capabilities.

Changing of the guard

Enzo always said that his favourite Ferrari was the next one. However, the 1957 California Spider surely contradicts this famous maxim, given that it is a model whose seductiveness increases over time. Scaglietti’s handiwork created a car far beyond the sum of its parts, and the name – reflective of the market it was conceived to satiate – underlined its symbolic potency. The revival began in 2008, and finds an important new expression in the latest California T, powered by a twin-turbocharged V8 rather than the 3.0-litre V12 used by its 1950s forebear. The sporting soul is intact, however, and the new car offers a blend of high performance and efficiency, as well as an appealing degree of versatility.

The F12 is even faster, with a top speed of 340km/h. While the FF is a car that might have surprised Enzo with its breadth, the F12 would be more familiar. A front-engined V12 supercar, it is a direct conceptual descendant of the 1967 365 GTB/4, otherwise known as the Daytona. This is one of Ferrari’s most famous and desired V12 road cars, despite its mechanical make-up countering the mid-engined trend of the era. Ferrari embraced the mid-engined layout too, and with a fervour that remains as evident in today’s 488 GTB and LaFerrari.

That fervour prompted Ferrari to go 23 years without a frontengined V12 supercar, despite Enzo famously reckoning that “the oxen go in front and pull the cart, they don’t push it,” when the revolutionary rear-engined Cooper F1 cars won races in the late 1950s. It didn’t take long for the winning rear-engined shark-nose Ferrari 156 F1 to appear in 1961, and by 1973 the engine was sitting behind the driver in the Prancing Horse’s ultimate supercar, the Berlinetta Boxer.

The turbocharged California T traces its lineage, elegant, sporty aesthetics and driving pleasure back to the late 1950s and the 250 GT California Spider.

But today’s F12 conclusively proves that, in the 21st century, the front-engined, rear-drive supercar is as electrifyingly able as its mid-engined stablemates. Five decades ago there was some doubt about that, until the Ferrari 365 GTB/4 required the critics’ minds to do some recalibrating. In 1967, the 365 GTB/4 was unveiled as the latest in a long and glittering line of V12 Ferraris, and you were left in no doubt that its engine lay immediately behind its air-slicing, arrow-sharp nose, the prelude to an assertively long bonnet suggesting power as forcefully as a launching F1 car.

The implication was not misplaced: the 365 GTB/4 saw off all comers (including two mid-engined challengers) in a contemporary French car magazine tyre-smoker in which it emphatically out-sprinted them all before ramming home its victory with a headier top speed.

That it was nicknamed Daytona after Ferrari’s recent famous victory there seemed entirely appropriate. The Daytona rapidly became a teenage boy’s dream, and an adult legend. But by the time of its demise in 1973, Ferrari was already embracing midengined technology. Front-engined supercars were absent until the arrival of the widely admired 1996 550 Maranello.

Today’s descendant of both these cars is the F12berlinetta, which at the time of its launch in 2012 was the fastest roadgoing Ferrari the Company had yet made. The V12, front-engined Ferrari? It boasts a bloodline stronger than carbon.