Forever in the shadows of its younger brothers, the forgotten first generation Dodge Charger is Mopar’s fascinating, rare and elegant answer to the mid-Sixties demand for personal performance cars, as Adrian Portelll’s magnificent ’66 ably demonstrates.

Think Charger, think big, loud, lairy brute. Simplistic, yet effective epitomes of the muscle car recipe majoring on external menace and tyre-smoking grunt. You’re probably thinking of a black 1968, maybe an orange 1969, or even a lime green 1971, complete with strobe stripes and none- too-subtle spoiler. Somehow the unconventionally elegant – rather than overtly muscular – shape of the 1966, with its chrome and subtle hues, does not fit the general perception of what the ‘Charger’ moniker represents.

Yet, here’s the first of the much revered line. Here’s the car that debuted the infamous 426 ‘Street Hemi’ in 1966. Here’s a muscle car with undisputed NASCAR provenance. Here’s a car you’ll struggle to And at any muscle car meet. 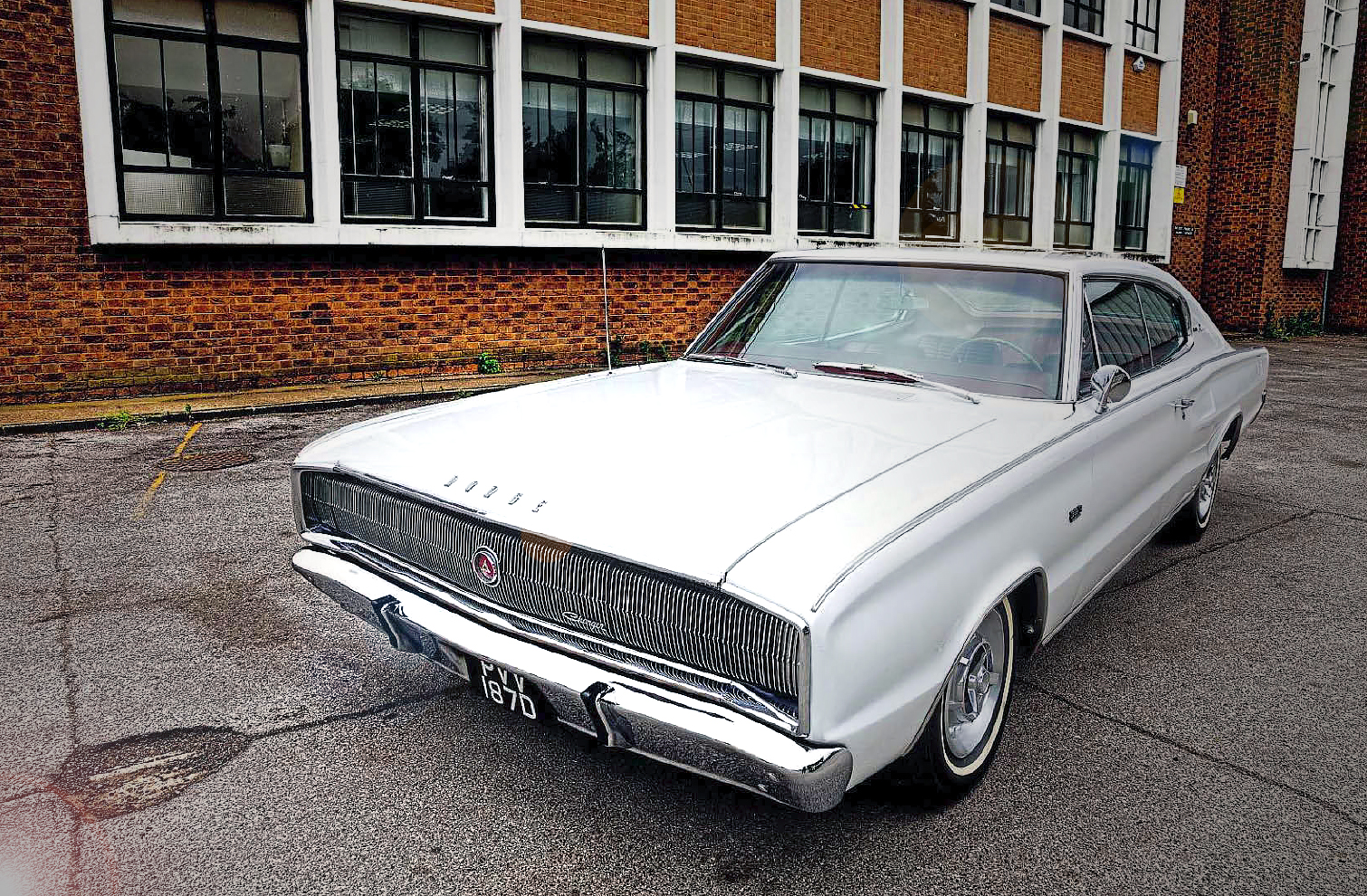 Perhaps the reason the 1966 and 1967 seem to be cut from a different cloth than the model’s later iterations is that, quite simply, they were trying to assume a more complex identity than the pure performance agenda they went on to embrace. Charger needed to find its feet, discover what it was. Charger did that in 1968, but the earlier car is all the more interesting for its ambiguities.

Born out of the necessity for the Chrysler group to keep up with the burgeoning pony and personal car market, and to reinvigorate the company after the styling, and later sales disaster of Virgil Exner’s ‘plucked chickens’ of the early Sixties (the post-Sixties Chryslers without Exner’s trademark fins which he claimed looked like ‘plucked chickens’), the brief was simply to plug the gap that existed between Ford’s Mustang and Thunderbird without duplicating what Plymouth had created in the Barracuda. 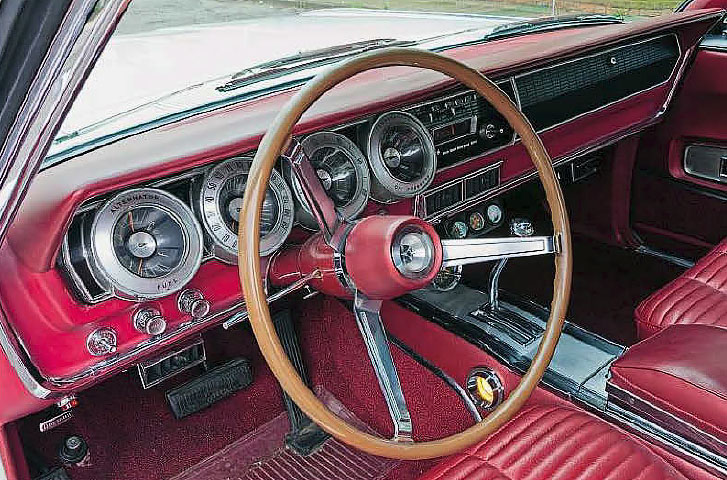 As Dodge Division’s general manager Byron Nichols said: “give us a car halfway between the Barracuda and the Thunderbird and we’ll have a whole big chunk of the market all to ourselves.”

Under the stylistic direction of the newly appointed Elwood Engel and the overall stewardship of president, Lynn Townsend, principle stylist Carl ‘Cam’ Cameron set about designing a personal car that would combine performance, luxury and style. His constraints were that the finished product would have to retail for under $3500, which in turn meant that he would have to work his magic around the existing architecture of the B-body Coronet. With the Coronet’s cowl, windshield and A-pillars as fixed points, he worked back grafting on a voguish fastback roof that, with pillarless side windows, created a continuous sweeping arc that flowed to the tail, between a pair of tiny fins that continued from the belt line, right to a futuristic-looking full width tail-light decorated in chrome with the name, Charger.

To ensure the unremarkable Coronet front end equalled the drama of the new rear, Dodge employed headlamps hidden behind the ‘electric razor’ radiator grille, giving a strikingly futuristic look. It was with some trepidation that Chrysler revisited this after the disastrous reliability of the 1943 DeSoto’s system. However, with twin electric motors and various fail safes built in it worked well and, thanks to the thin slats of the bright grille replicated on both the headlamp and blank sides, looked seamless in either position.

The interior screamed plush, jet-set GT, rather than bare bones racer, and, alongside all the expected chrome embellishments and fluted vinyl, offered a number of unusual and innovative features. The full length console extended into the rear splitting two individual rear seats this gave all four passengers a cockpit feel, but the really clever bit was that the rear armrest, along with both seat backs folded forwards to give – when the hatch between the cabin and trunk was opened – 8ft length of load area. The fastback was not simply a looker, but a surprisingly practical car too.

Dodge even referred to the Charger in their adverts as a ‘sports wagon’. Not something you could imagine the Arm championing its later Chargers as. Yet it gives you an insight into the kind of people it imagined as Charger customers. Adverts, portraying trendy young go-getters, suggested the folding load bay was perfect for a couple of pairs of skis. Much was also made of the car’s comprehensive instrumentation, and, prepare yourselves to be amazed, a dash mounted rev counter (bizarrely the clock was then mounted in some sort of tach pod on the console). ‘No idiot lights or tacked-on tachs,’ the ads proudly claimed. More interesting though, was the use of electroluminescent lighting for the instruments. Pioneered in 1960, this uniform bulb-less glow was substantially more costly, yet spelled out Dodge’s desire to make the Charger a premium, luxury product. It summed up its intent best with the advertising slogan, “Put down undersized, under equipped personal cars… go Charger.”

Starting at $417 more than the 273cu in V8 Coronet, the base Charger looked good value, especially as it had the new 318 small block.

The fastback was not simply a looker, but surprisingly practical too. Not something the you’d imagine the firm championing its later Chargers as.

Next came the 361, then the popular 383cu in big block – as fitted to Adrian’s car here – backed up by the equally popular 727 three-speedauto. Of course the big news was the heavily promoted 426 Hemi, but only 468 of the 37,344 produced in ’66 were so equipped, making its existence almost academic. CAR Magazine voted it performance car of the year, while Motor Trend was sufficiently enamoured with its styling to claim that it looked good from every angle – far superior to the similarly styled AMC Marlin. For Car & Driver, “the styling conjured up the fantasy of all sorts of exotic engineering underneath,” but it felt that fantasy unfulfilled in the drive, saying: “We’ve been here before, in an ordinary Coronet.” Of course, underneath the party frock it was just a Coronet. Not an impediment for the Charger as a muscle car, but as a personal luxury coupe? Maybe.

Luminescent dash has an eerie green glow at night.

For Adrian, it was all about the looks. Having scratched his first itch, a ’69 Mustang, Adrian decided that he wouldn’t mind something else and turned his attention to Chargers. Cars that reminded him of his youth growing up in Melbourne, Australia: “I started off looking, like everyone else, at ’68 and ’69 cars. I bought a couple of books and started to look around at what was available. That’s when I saw Elton ‘Al’ Eckstrand’s Lawman ’66 race car. I thought:

Having decided that it was an early Charger that he wanted, the hunt was on. Except it wasn’t that simple. This era of Charger are thin on the ground in the US, let alone in the UK. “I joined the Mopar Muscle Association’s message board, laid low and kept an eye on the usual sites. There were a couple in the States but then this one turned up in Australia, right near where I’m from. It was a very well optioned car with power steering, brakes and windows and appeared in superb condition.

It was around the money I wanted to spend, but of course there was shipping to the UK on top. Having been bitten before, I decided to get a local Mopar guy to inspect the car for me. Although he found a couple of issues, the news was basically good. So I bought it and organised shipping to the UK – this car’s seen more of the world than most people!”

Back over here, Adrian started digging a little more into the car’s history. Delivered new to a Dodge dealer in Lewiston, Idaho, it’s thought that one owner had the car until it ended up at a dealer in Oklahoma prior to being shipped to Australia. The car is remarkable in that it appears to have had very little restoration work and, according to the data card, is in its original specification with that glorious red interior contrasting against the simple white paint.

Adrian has had subtle LED lights fitted to convert the car to UK lighting and once registered simply got on with the onerous task of driving the thing.

“Compared with the Mustang it’s a cruiser, but it’s so smooth and enjoyable I find myself reaching for the Charger keys every time. There’s nothing like the spares network of the later Chargers, but you find there is a small but very enthusiastic network of owners who will stop at nothing to restore these cars. Rather than big business, it tends to be cottage industries – guys who make parts at home. A good example is the electroluminescent instrument lighting. I wanted to be able to enjoy driving the car at night so I’ve sent my instruments to a guy working out of his home in the States who has figured out how these things work and how to mend them. That level of dedication is great.”

With such a lovely example to enjoy – one of possibly three in the UK (we’re sure you’ll be in touch if you know otherwise!) – there’s only one thing left to say. And that’s something Dodge suggested to would-be Charger buyers back in ’66: “turn up the wick, and you’re gone, man, gone.” Far out.