From the cockpit – Bugatti T57G 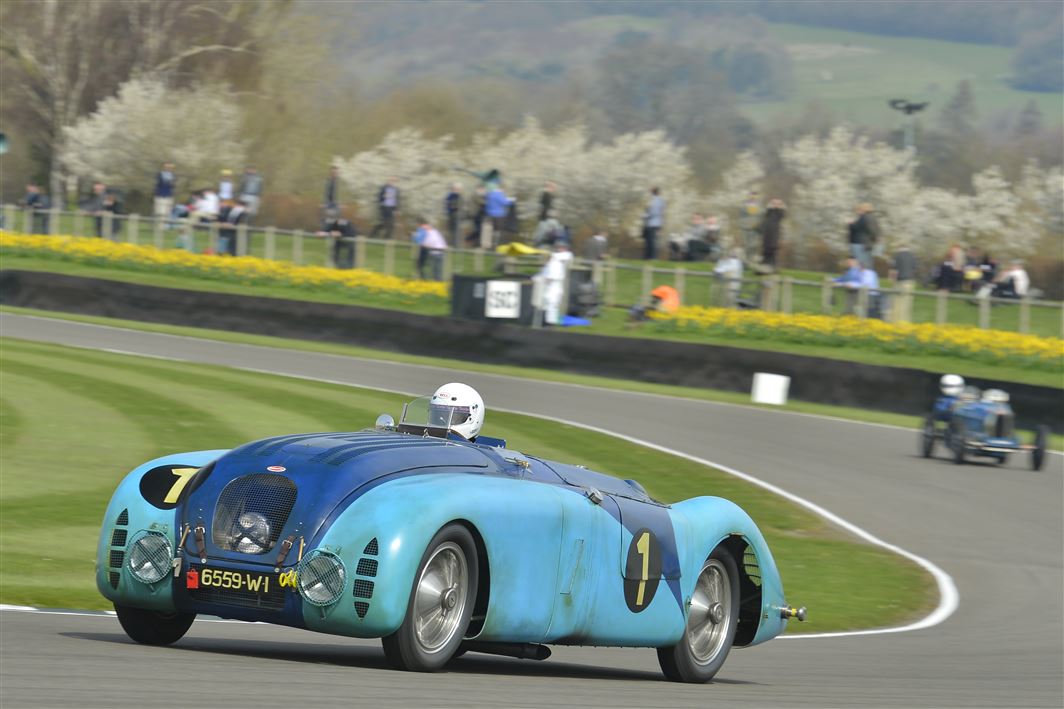 From the cockpit. Faithful recreations of long-lost cars have been among the highlights of historic racing in recent years. When Drive-my was launched in 1982, the prospect of Lancia D50s, Cunningham C4Rs and Maserati Tipo 151s competing in anger would have been a fantasy, but now they’ve all starred at Goodwood. The amazing grid of 25 Bugattis blasting away at the wonderful 72 nd Members’ Meeting was another first for Lord March’s team, but the biggest surprise was a Type 57G running among the raucous pack of supercharged Molsheim open-wheelers.

The fascinating project was instigated by a German Bugatti collector, who realised that he had no chance of acquiring the sole-surviving ‘Tank’ that is one of the stars of Dr Fred Sime- one’s superb museum in Philadelphia. “We weren’t interested in building a completely new car, it had to be based on a genuine Type 57 chassis,” says Bugatti specialist Malcolm Gentry. “Once we’d sourced a frame, we knew that, short of the engine and body, we had enough parts in stock.” With the green light from the client in 2012, his Buckinghamshire-based family business started to research the 1937 Le Mans streamliners in earnest: “It’s believed that only the winner was an S chassis, and the others were naturally aspirated Type 57s. We shortened the chassis by 30cm, and started building an engine with a Bugatti C3 racing carburettor.”

The body proved to be the biggest challenge because there were no works drawings other than a bulkhead design with the Bugatti Trust: “We couldn’t get access to the Simeone car, but the discovery of a superb 1:18 Spark model proved a godsend.” With no prior experience, Gentry’s team sourced a 3D scanner and drawing program for £2000 from the USA, and taught themselves how to use it: “We inputted all the body measurements, including those of the chassis, and with a few tweaks the jigsaw started to fit together. Once happy with the shape, we sent the dimensions to a local specialist with a CMC mill and a full-sized body buck was cut.” Amazingly the ‘Tank’ appeared to have no body frame, yet seemed to be very rigid once panelled up and mated to the cast-aluminium bulkhead. The design is made up of three main sections in 18-gauge alloy, which can be quickly removed for access to the chassis: “The body has a full undertray, and was reportedly very stable at high speed. Bugatti had no access to a wind tunnel, but you can see the connection with the Railcar. Jean was a natural.”

The attention to detail in recreating the body is superb, right down to the offset fuel-filler flaps, light fittings, brackets and external jacking points: “The huge driver’s-side lamp was a mystery, but now we think it was used at night to light up right-hand bends at Le Mans. The curved windscreen made from early Perspex was another first.”

The final touch was a fabulous set of reproduction Bugatti Type 59 wheels from Crosthwaite & Gardiner, then a wide selection of colour samples was sent to Germany for approval before finishing by Limn Histories:

“The ‘distressed’ effect is wood stain – it was the owner’s idea, and isn’t really our style.”

Other than Gentry’s team, few knew about the project until it appeared at Goodwood for a test run prior to its debut in the Bugatti race at the Members’ Meeting. “We built the engine for torque rather than outright power, and tested it locally and on the rolling road for 400 miles,” says Stephen Gentry, who was elected to drive for the T57’s first race. “I reckon we’ve done three days on the rollers just setting up the carb, which was tricky to tune. Amazingly, it doesn’t feel a like big car, and the handling is pretty neutral. It suits Goodwood, and was still pulling down the Lavant straight. We would love to enter it for the Le Mans Classic this summer.”

The ‘Tank’ has been a new experience for Gentry Restorations, a specialist that started out focusing on Brescias, but the team has done an impressive job. I never thought I’d see one race, but the prospect of witnessing the Bugatti streamliner run again at night around La Sarthe, following in the tracks of Jean-Pierre Wimille and Robert Benoist, will be special. All we need now are a few Adler streamliner reps to keep it company.

“The huge side lamp was a mystery, but we think it was used to light up right- hand bends at Le Mans”