I’ll come clean. I am not an E-Type Series III fan. It isn’t just the podgy looks and that bling-laden grille; the driving dynamics just aren’t there for me. Compared to the raw, brutish power of the legendary XK engine, the V12 leaves me feeling a bit cool. Sure, the power is impressive, but it lacks that gnarly roughness that is absolutely key to the beautiful soundtrack of its earlier siblings. It is perhaps a step too far down the path of refinement for my Luddite ears. 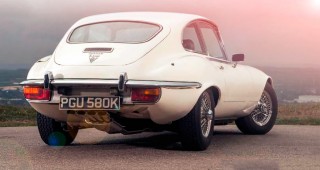 I genuinely do not think it sounds very special. It’s almost ordinary. To be honest, while performance is certainly not sluggish, it only brings the E-Type back to the sort of place it was a decade earlier, before it began to gain weight. That doesn’t seem like progress to me. Of course, it might well have had more power if fuel injection had made it to production. The V12 was always intended to use the AE Brico system, but it was proving very problematic during development.

Jaguar found itself forced to cram four CD carburettors under the bonnet and fuel injection would have to wait for the XJ-S. Perhaps Jaguar was right to go to carburettors at the time. After all, Aston Martin persevered with the AE Brico system, and compromised its cars for several years before it too also reverted to carburettors.

The V12 was also hampered by its Lucas OPUS transistorised ignition. This proved rather prone to overheating, with the ignition controller sitting in the middle of the vee. It seemed unable to cope with the rather hot under-bonnet temperatures that had always been an E-Type feature, especially in hotter climates. It just wasn’t as good as it shouldn’t have been, and sales soon began to tail off.

But, 45 years on from the Series III’s launch, can modern technology make the E-Type V12 the car it should always have been? Happily, we’re about to find out. 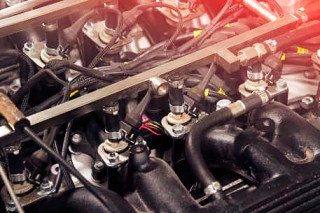 Firstly, I should point out that injection kits for E-Types are nothing new. Some companies have been offering them for quite a while now. But, I was drawn to E-Type UK’s system because it is one they’ve developed in-house, with assistance from Norfolkbased Emerald. E-Type UK fitted its first kit in 2012 and has recently seen interest in these kits grow. Open the bonnet, and the difference is immediately apparent. Gone is the collection of carburettors either side of the engine, along with the vast amount of pipework and linkages.

Instead, there’s a rectangular-section fuel rail that runs around the middle of the engine, with the two coil packs sitting in the middle. It’s all a lot neater, though the electrical connectors to each injector seem a little incongruous in this classic engine bay. It’s a bit like catching your gran hunting for Pokémon. The twin air boxes are from fabled Jaguar tuners AJ6 Engineering, and include a large butterfly where they attach to the inlet manifolds.

Those manifolds are standard Jaguar items from the later XJ-S era, complete with the injectors. Fuel is supplied from a custom-made fuel rail that runs around the vee. An Emerald ECU controls the firing of the injectors, as well as the ignition timing. Modern Ford coil packs provide the spark and are located underneath the fuel rail.

“…smooth and peaceful when you want it to be, and certainly very capable of surprising modern traffic with its pace” 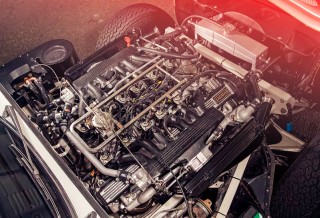 This is one very tunable engine as suddenly so many parameters can be adjusted and tweaked. Out of sight, there’s a crank sensor feeding information to the ECU, as well as air sensors in the airboxes. The thermostat housing has another sensor fitted to feed temperature information to the ECU, so it can adjust the mixture automatically. For safety’s sake, there is an inertia switch, so that the fuel pumps are turned off if the vehicle is involved in a collision.

An optional part of the upgrade is the tubular exhaust manifolds. It usually follows that to get the best out of any induction modifications, exhaust changes should follow. As well as the tubular manifolds, there are smaller centre silencers, which also offer better ground clearance than the original items. Overall, the system gives better flow. The whole system is courtesy of Hayward and Scott (www.haywardandscott.com).

Other modifications include an uprated radiator, with twin electric cooling fans, a delightful aluminium expansion tank and a lightweight, high-output alternator. Some may baulk at the idea of a classic Jaguar that needs to be tuned using a laptop, but that’s an essential part of this technological mix. The fitting of the kit includes a rolling road set-up, which is absolutely essential to ensure the engine is working at its best at all loadings and speeds. 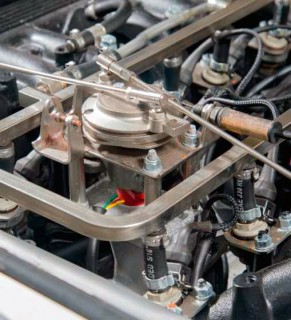 This is all well and good, but what does this upgrade do to the driving experience? Firstly, you don’t have to worry about the choke when it comes to starting. You do need to let the fuel pump build up the fuel pressure though. It whirs rather noisily into life as you turn the ignition on and is one of the non-engine bay modifications. The fuel rail runs at a constant pressure, and you need to wait for the pump to initially click off before trying to start the engine. That tells you that pressure has been achieved. A turn of the key fires the starter motor smoothly into life, which is a high-torque unit E-Type UK has fitted. The engine then growls quietly into life. So far, so situation normal. The cold tickover seems to pulse slightly until the engine is up to temperature, but soon settles down as the myriad sensors report that the engine is warming up.

I patiently wait for the engine to get up to full operating temperature before exploring its potential, so I drive gently, marvelling at how smooth and tractable the engine is. Not that dissimilar to the original to be fair. There’s quite a bit of exhaust boom at around 2000rpm, which can even be quite painful. Perhaps this isn’t going to be all its cracked up to be.

Then the traffic clears, the road opens up and I can finally unleash the full extent of this car’s power. Oh gosh. It’s brisk, certainly, though not neck-snappingly so. It just has that ability to gain a rather serious amount of pace without you really being overwhelmed. The performance really isn’t the story here though.

I mean, sure, it feels a bit brisker than a standard V12, confirmed by rolling road figures of 260bhp at the wheels – it was 230bhp before the upgrade. The headline story is the noise though. This is something spectacular indeed. The way the crescendo rises up stirs your soul in the same way as a race-tuned XK lump, or the rasping growl of a brand new F-Type. It’s has some primeval response on the senses. It says “this is going to be exciting. Get ready.” It’s not overly loud, it isn’t offensive. Just truly magical.

“The way the crescendo rises up stirs your soul in the same way as a racetuned XK lump, or the rasping growl of a brand new F-Type” 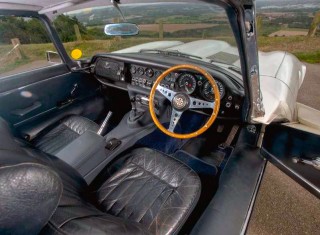 I grab another gear and want to just keep going, until I realise that such antics can make the speed rather unsociable. It’s better to find an excuse to slow down, then experience that acceleration all over again. Truly, this is the V12 I’ve been waiting for. It certainly is not plain or underwhelming.

It all rather distracts me from the gearbox in this example, which is an E-Type Fabs (www.etypefabs.com) 5-speed unit. E-Type UK reckons the main advantage is that it plugs pretty much straight into an E-Type, with no modification needed to propshaft or bodyshell. It certainly feels delightful to use, with a firm, mechanical change that feels absolutely right for this vehicle. There was no catching out the synchromesh during quick changes, and it felt wonderfully precise.

As we break for the static photos, I’m forced to reappraise my views on the Series III. It looks very good indeed in Old English White, and I think the styling modifications look more suited to the 2+2 bodyshell used on this final generation of E-Type. The bulbous snout is neatly matched to the bulbous rear in a way it just isn’t on either the six-cylinder 2+2 nor the Series III roadster. There’s an unexpected harmony here. Or maybe it’s just that the engine note has had me falling totally head-over-heels for this car.

Inside, there are a few detail changes from standard. The steering wheel is an inch smaller in diameter, and perhaps helps with the very precise feel of the car. Some find the power assistance a bit too eager, so the smaller wheel helps counter that.

The centre console has been trimmed in leather rather than vinyl too, and there’s a rather nice stereo that mixes an old style look with modern technology.

The LED display is a little incongruous, but the twist-knobs are a nice, period touch. I can’t say I felt any great desire to turn it on though. Settling behind the wheel for the motion shots, I’m forced to drive the car with a lighter foot, which only reveals how well the engine pulls from any engine speed. It’ll pull 20mph in top gear, though I’ll concede it doesn’t really accelerate very strongly from such a situation. It will do so without complaint though.

Similarly, at motorway speeds, the engine is turning over at just over 2200rpm. It’s remarkably smooth and peaceful when you want it to be, and certainly very capable of surprising modern traffic with its pace if you are of a mood.

So far, so good, but such improvements do not come cheap. The exhaust manifolds alone are £1320 a pair, with the rest of the system coming to just over £1060. The gearbox is another £7800 plus fitting and the fuel injection system is £14,400 – all prices include VAT. Mind you, fitting fuel injection is not a five-minute job, and that price includes shipping the car to Emerald in Norfolk for a full rolling road session.

With such considerable exhaust modification, it’s sometimes difficult to tell what is contributing most to the improved soundtrack. If I could level one very small complaint, it’s that there’s not any induction roar. I think that’s what sets this engine apart from a rip-roaring Ferrari V12 for instance.

Not that this is necessarily a bad thing, as the Jaguar remains docile and content whatever the engine speed, where a Ferrari might splutter and demand special treatment. That’s a niggle rather at odds with my desire to jump back into this car and experience that beguiling engine note all over again though. It’s certainly one heck of a way to dispel any Monday morning blues. As upgrades go, the ones featured here have utterly transformed my impressions of the E-Type Series III, and that was no mean feat.

THANKS TO E-Type UK and owner Peter Sauro for loaning us this car. 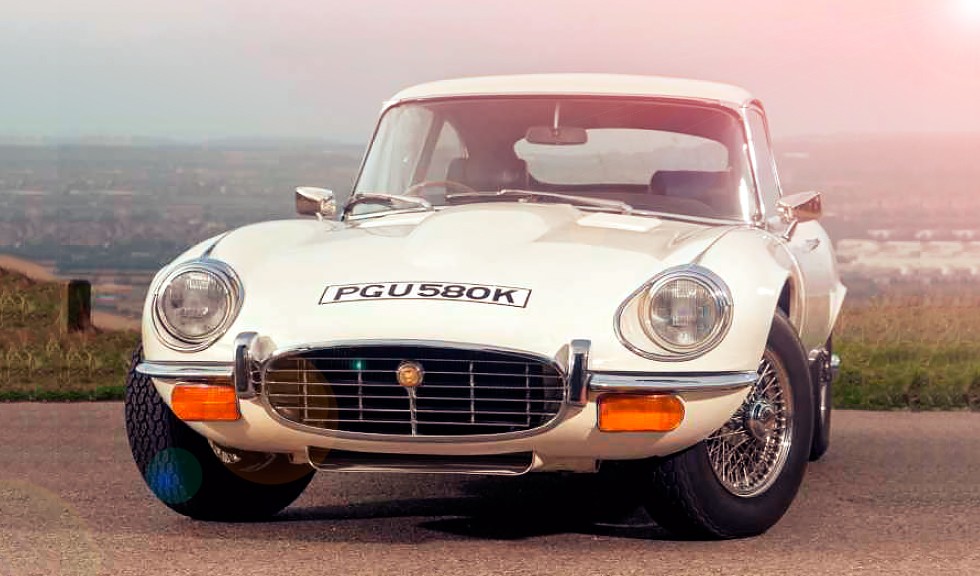 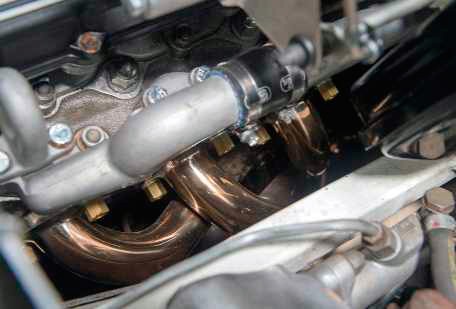 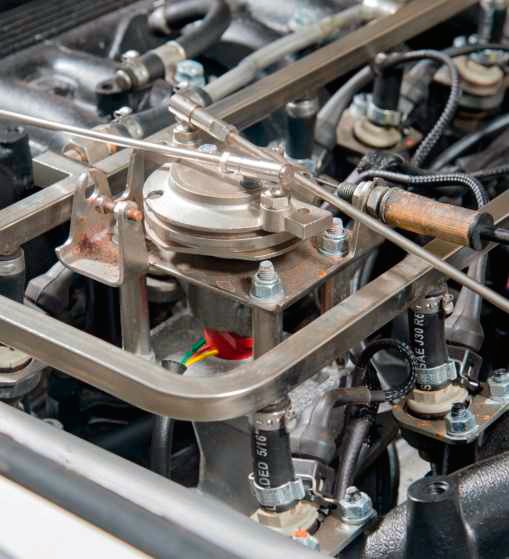 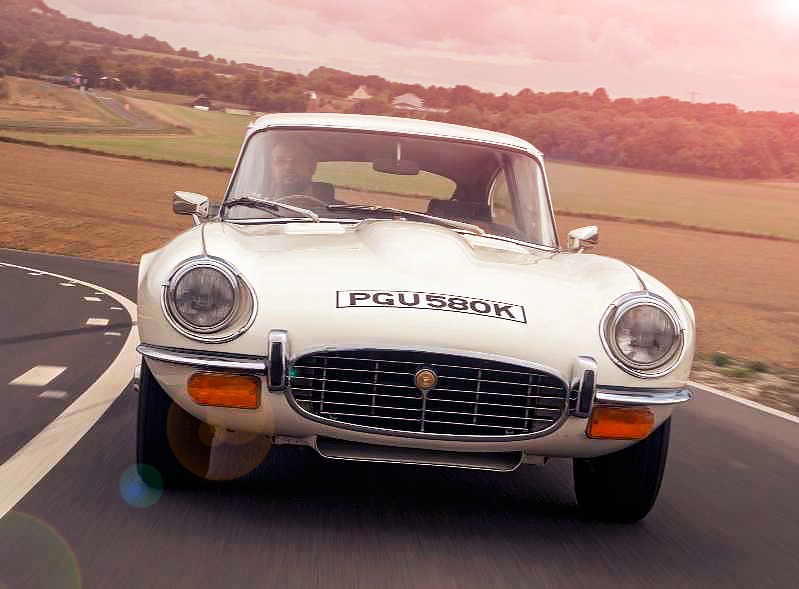 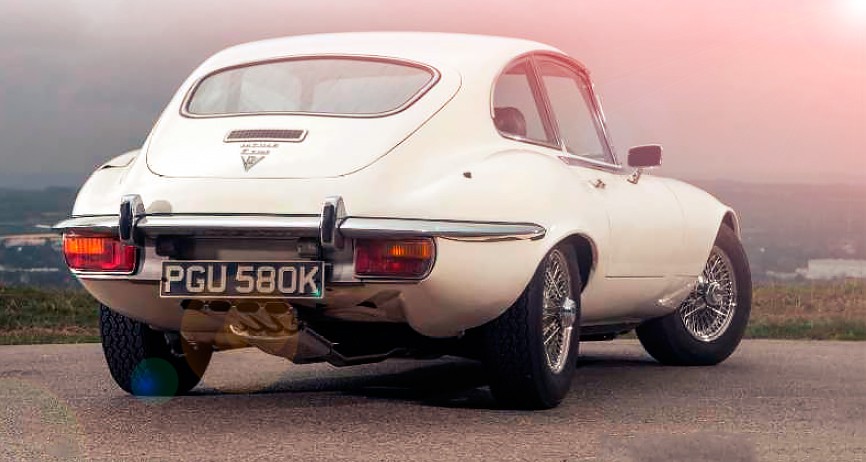 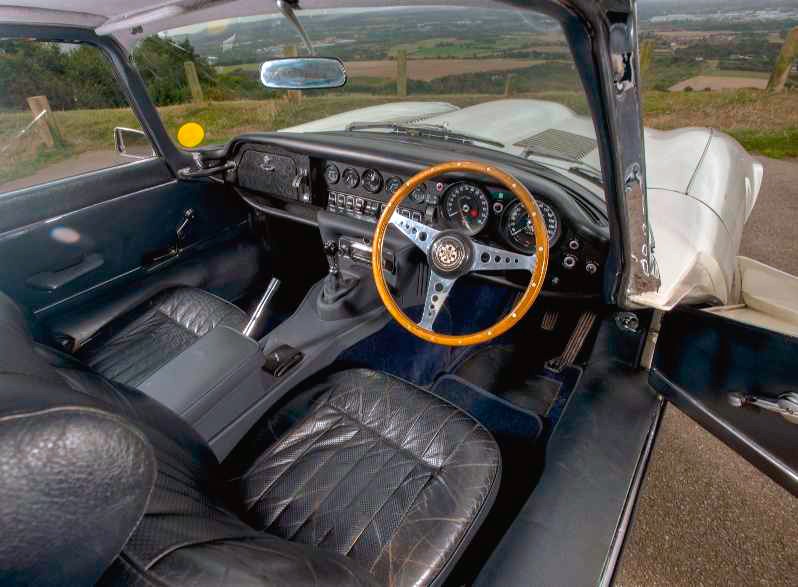 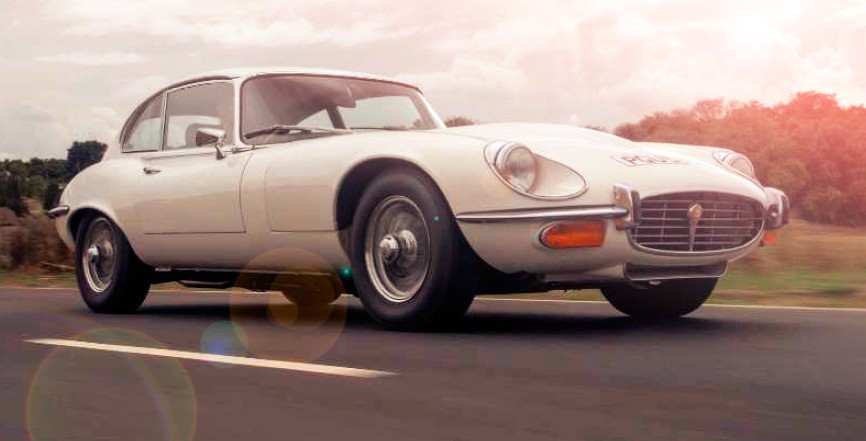 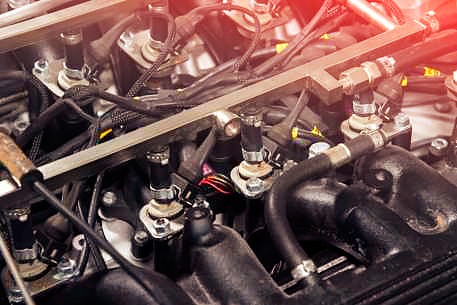 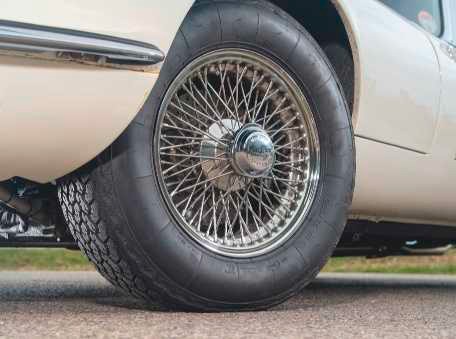 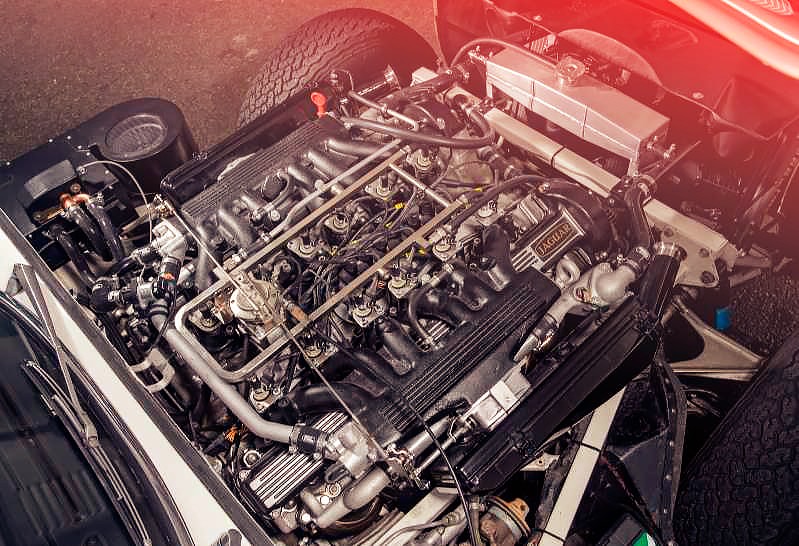