style=”light” size=”5″]A capable grand tourer that looks stylish without being flash, the 1976-1988/89 BMW E24 6 Series has ridden the wave of interest in Bavarian modern classics in recent years. Values are high enough for owners to invest decent sums on maintenance, so there are lots of good examples to choose from. Yet they’re still eminently affordable, with decent E24s available from under £20,000.

This guide pools the expert knowledge of Ron Inskipp of bigcoupe.com and Konstantinos Ioziou of the BMW Car Club GB (bmwcarclubgb.uk), plus Barney Halse of BMW specialist Classic Heroes (classicheroes.co.uk). The latter advises, ‘Buy the very best E24 that you can find and afford. Anything less is guaranteed to cost you more in the long run to get up to A1 standard.’

1976: the 6 Series arrived in carburetted 630CS and injected 633CSi forms, both with a 3210cc straight-six. These cars were built by Karmann.

1978: production moved in-house to BMW and the luxurious 635CSi appeared, with spoilers and stripes.

1985: the ultimate 6 Series appeared, the twin-cam M635CSi. It looked much like any other 6 Series but was far more complex. Also, the 628CSi got ABS as standard.

1988: redesigned headlights and climate control, but within a year the 6 Series was replaced by the 8 Series.

Expect some corrosion, even on cherished cars, because it’s hard to completely eradicate. Pattern panels have never been offered, but there’s a good supply of well-made new BMW parts. Prices can be high, but used panels are often available.

Expect rust in the inner sills (effective repairs cost £1000-£2000) and lifting pads (£1000 including removing the interior trim); the latter were only intended for transporting the bodyshell in the factory, not for jacking up the car; doing so causes distortion. Outer front wings corrode around the wheelarches and in the lower corners, along with the inner front wings. Replacement front wings are £600 apiece, but replacing both, patching up the inner wings and painting everything costs at least £2500.

Also expect corrosion in the battery tray (a £600 fix), where the front lower corners meet the front panel (another £600 to sort) and the sills; the section where the rear wheelarch meets the back of the sill is a particular candidate for corrosion. Budget another £1000 to put both sides right. 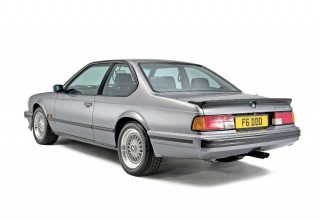 Rust is common in the rear wheelarches (£1250 to fix) and the floorpans. Repairs are £800 if only the front corners are affected, but if the rot is more widespread this could be £2500. Fatigue in the front subframe allows the steering box to break away, leading to a £200 repair bill; strengthening is possible to prevent future problems.

Most E24s got a sliding steel sunroof. Make sure the mechanism works properly and look for evidence of corrosion around the aperture. Also check for signs of rusty water in the surround, signifying blocked drains; the A-pillars could be corroding from the inside out. That can easily cost £2500 to repair because panels are scarce and headlinings are expensive to replace. Don’t buy any E24 with an obviously rusty roof.

The rear screen surrounds tend not to rust and nor do boot lids or bulkheads. But rust under the rear lights and bumper costs £500 minimum to fix, while a rusty front windscreen surround is a big job to sort which is why it costs £1000. Fuel tanks also leak when the filler neck corrodes; replacing one costs £650 with replacements readily available.

All E24s have an M30 engine apart from the M which got an M88 unit; US cars feature an S38 with a duplex chain. The straight-six will easily notch up 200,000+ miles if the oil is changed regularly to stave off camshaft wear. The oil spray bar can work loose, starving the camshaft of oil; the cam cover should be removed at each plug change to see if it’s in place. The spray bar can be Loctited or wired into position.

‘Values are high enough for owners to invest decent sums on maintenance, so there are lots of good examples to choose from’

Pre-1982 E24s used the E12 5 Series platform; Post-1981 cars use the E28 5 Series floorpan. Earlier cars have now all but disappeared. Most E24s have leather trim but 628s came with cloth, although decent second-hand interiors can be sourced.

he six-cylinder powerplants used by the 6 Series are inherently robust, but they don’t like inactivity. All E24s came with a straight-six in an array of displacements from 2.8 to 3.5 litres; all are torquey and sonorous.

If a fresh camshaft is needed the cylinder head must be removed; it makes sense to replace all valve stem oil seals at the same time, bringing the bill to £2500. Timing chains wear, leading to rattles (a £300 fix), while tired engine mounts lead to the cooling fan making contact with the radiator; a pair of new mounts, supplied and fitted, costs £150. The M88 engine must have a new timing chain every 100,000 miles and it’s a huge job, which is why it costs £4200.

All post-1982 cars have Bosch Motronic fuel injection. It’s a reliable system that stays in tune once set up and there’s no shortage of specialists. If the worst happens and you buy a car with an engine on borrowed time, budget £2500-£4000 to overhaul a regular straight-six; reviving an M unit costs more like £5000-£10,000 depending on whether or not pistons are required.

Most 6 Series (especially late ones) came with an automatic gearbox, but some cars got a four or five-speed manual transmission; all Ms are manuals. With maintenance, high mileage isn’t a problem, but if the fluid in an auto gearbox is black, a rebuild will be needed at a cost of around £2500. Usable second-hand gearbox start at £500.

Clutches and differentials are robust but propshaft bearings wear, leading to judder when setting off; budget £225 to fix. Manual-gearbox cars got a limitedslip differential and those can now be picked up used but you’ll pay £1200 for one. The various engines and transmissions got different diff ratios so you need to be careful what you fit. The standard ratio (3.07:1) on the 1982-1987 635 is very tall for UK roads. The lower ratio of Highline editions (3.64:1) really wakes up the E24.

The 6 Series is heavy, so expect tired suspension, especially if wheels bigger than 16 inches are fitted. If the car wanders at speed it’s because the bushes need to be replaced (at £250); fresh dampers will probably be needed too (£400), with an upgrade to M-spec Bilsteins worthwhile at £800. Lowering springs can wreck ride quality, but such changes aren’t unusual.

Early cars had four-piston front brakes, but E28-based models had two-piston calipers; M cars had four-piston up front with standard E24 at the back. The M’s system can seize up through lack of use and the discs could distort, but switching to more modern Brembo calipers and discs at the front – a £1650 upgrade – will improve reliability and pedal feel.

The E24 came with plenty of electrics and electronics. Later cars are especially well equipped and they don’t like standing idle, especially if outside. Slow-moving seats, sunroofs and windows might be down to lack of use or it might be poor connections at the fusebox. The gauges stop working when their batteries fail.

These leak then destroy the circuit board behind the gauges – replacements boards are £300 – but it’s possible to solder leads on to connect to a battery pack. The Highline’s cabin was swathed in Nappa leather and there’s a lot more hide than in a regular E24. The door panels can crack where the pull is attached, and the headlining backing turns to dust which then seeps out. Replacement headlinings aren’t available but a decent trimmer will be able to fix things for £1250.

4 Something a bit rough will fetch £20k-£35k; projects are worth more broken for spares. Highlines carry a premium of 15-20% over a regular 635CSi.

‘Bought six years ago when I was just 21, my 635CSi Motorsport Edition was a run-out model built in 1988. It was my first car and it took 18 months to find something suitable because so many of these cars were optimistically priced and in much poorer condition than their sellers claimed. Rotten wings along with damaged switchgear, trim and paint were common. ‘Since buying it I’ve swapped the metric wheels for 17-inch BBS rims (£1300), fitted Bilstein dampers and H&R springs (£500), and replaced the original BMW alarm for a modern Clifford system (£600). I had the cylinder head skimmed, a new head gasket fitted and replaced a faulty ECU (£2000), and I’ve renewed all of the rubber parts such as hoses and gaiters which cost another £1000. I use an independent specialist for maintenance; a full service is £650.’

‘My 1984 635CSi was bought as a second car; in 16 years of ownership I’ve notched up an average of 4500 miles each year – it now shows 133,000 miles on the clock. It’s used mainly for European road trips, two-up with luggage, and I can’t fault it. ‘A few years ago it had replacement front wings, rear wheelarch sections and a partial respray which cost £4000; all-in I’ve spent about £12,000 over the years. I do most of the work on it myself; they’re easy to work on because few special tools are needed and access is generally good. ‘Shopping around for parts is essential – you can save plenty without cutting quality.’

‘My father bought a 635CSi in 1989 when it was three years old; I took it on 12 years ago after it had been laid up for a while. The car had been garaged all its life, which is essential with these cars. As a result it needed just some minor welding and a respray along with fresh fluids, filters and a brake overhaul. ‘It does just 1500 miles or so each year, usually on European road trips, to which the car is ideally suited. At motorway speeds it will do an easy 350 miles on a tank. ‘Ensure the steering box is set up correctly – often they’re not and the handling suffers. DIY maintenance is straightforward but the quality of some pattern parts is variable. BMW bits are costly but the quality is always excellent. On average I spend £1000 per year on my car, for routine maintenance along with the occasional one-off bill.’

Peter McIlvenny of specialist classic car insurer Carole Nash says, ‘The BMW E24 must have looked like it had arrived from another planet in 1976 with its shark-like looks that still seem modern today. Values for these cars stayed static for a number of years, even into the mid-2000s. However, in the last ten years we have seen a steep price increase across all models – but as you would expect, the M and Highline versions attract the most interest, with values from £30k upwards. Over the next ten years I can only see the values increasing further, with lower-spec models seeing a sharp increase as the Highline and M versions flatten out and become out of reach for most enthusiasts.’

Genuine 23,100 miles, two previous owners – the current since 1991. Original paint (cross-checked with paint gauge against factory levels). Garaged at all times, only driven on high days and holidays, SORNed in winter months. The smell, the feel of the interior, the creaminess of the engine, the gearchange even the brakes are efficient and feel new. There are no funny noises or wobbles, just driving perfection.