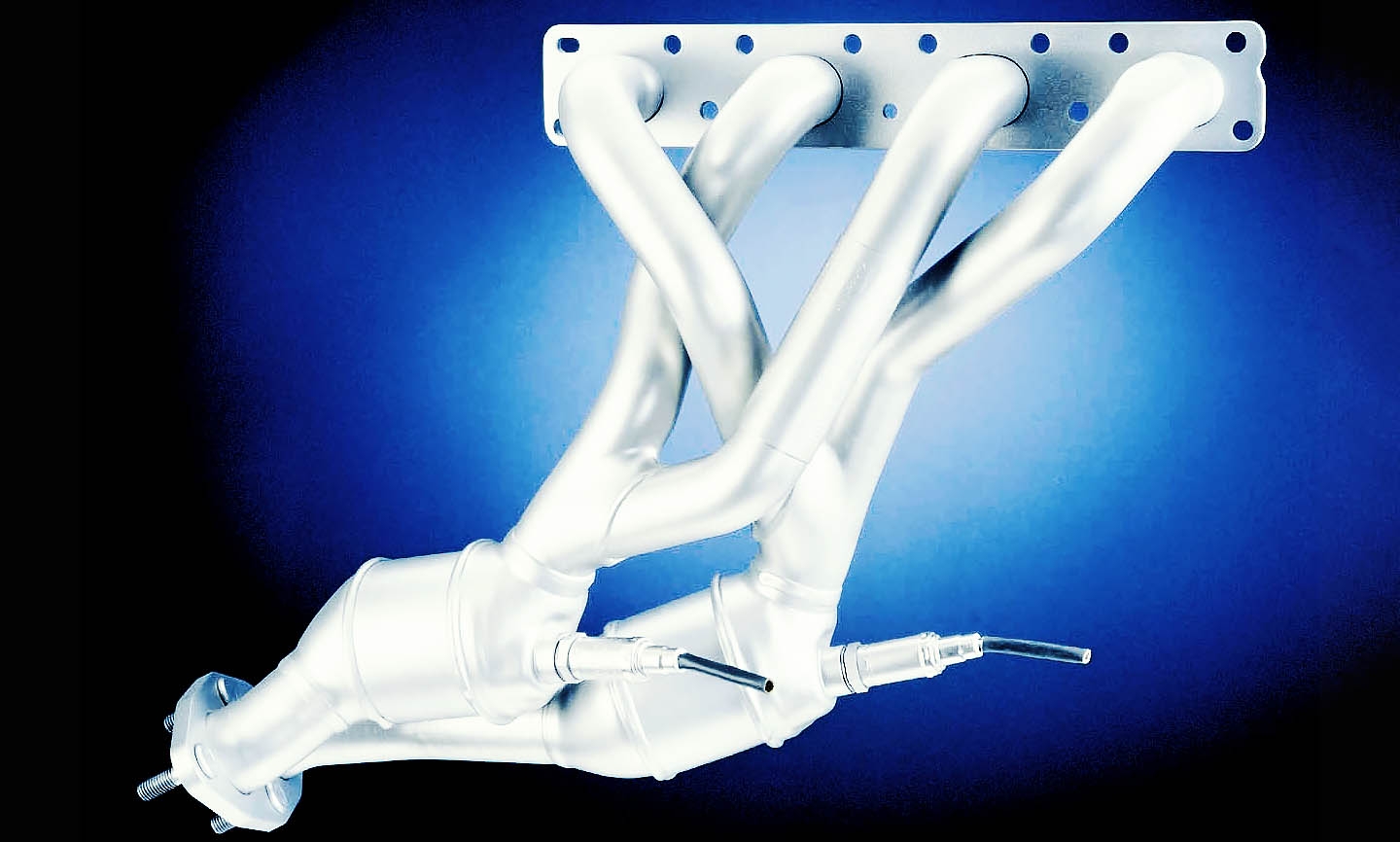 The exhaust manifold, branch manifold or header as it is referred to in the US is simply the plumbing to route the exhaust gases out from the exhaust ports in the cylinder head to the start of the exhaust system. Or is it?

This may seem a simple task with little consideration required in the design apart from minimising back pressure and making sure there are no exhaust gases poisoning the vehicle occupants. However, the exhaust flow from an engine has some quite complex dynamics going on and a well-designed exhaust manifold can increase performance in a number of ways.

The majority of factory exhaust manifolds are designed as a single casting, effectively joining the head to the exhaust system in the cheapest and most convenient way. This is a reasonable solution for low revving engines. There’s little in these types of manifold to enhance performance. In contrast, a tubular manifold will almost always increase flow and hence performance from the engine. The most obvious advantages of a tubular exhaust manifold are its smooth internal surfaces, its light weight and the generally larger bore of the downpipes which allow the engine to exhale more effectively, reducing pumping losses due to the exhaust manifold gas pressure acting against the piston trying to pump out the spent exhaust gas. Oh, and they look good, too.

Consider, though, that at 7000rpm, a six-cylinder engine will produce 350 exhaust pulses per second, and these pulses can be utilised with a combination of tube diameter, length and design to unlock otherwise wasted power. The way in which the tubes join, known as ‘collectors’, also have a large effect on the performance of the manifold.

In the cast manifold the inlet runners from the head to the ‘log’ (the chamber where they join) are usually quite short, and this causes the pulses from the cylinders to interfere with each other, fighting against each other to reach the exit, restricting flow. In the tubular manifold, though, the initial pipes are longer, promoting smoother flow out of the exhaust port. They attach to a collector where they all flow in the same direction, eliminating any flow interference between cylinders.

This design can then be tuned to utilise flow pulsing and the development of the shock waves in the exhaust. Both of these properties of the exhaust gases can be used to increase the draw of inlet charge into the cylinder, promoting a fuller combustion charge and hence increased power. The energy in the exhaust gas flow is divided between heat and the kinetic speed of the gas. As the energy dissipates through the escape of heat through the pipe walls then the gas speed will slow, reducing the scavenging effect. This heat loss can be minimised in a number of ways. The most common is with the use of an exhaust insulation wrap (such as that offered by Thermo-Tec or DEI), although ceramic coating has now become more affordable. These insulations not only maintain a high gas speed in the exhaust but have the additional significant benefit of keeping underbonnet temperatures lower.

As mentioned earlier, there are a large number of exhaust pulses speeding through the exhaust manifold. Even at a 1200rpm fast idle this is as much as 60 pulses per second, and these can be imagined as a series of high pressure waves travelling through the pipes at the speed of sound. When they exit the downpipe a shock wave is produced at a lower than atmospheric pressure, which travels back up the pipe, again at the speed of sound, and arrives back at the exhaust valve. By careful tuning of the pipe length, this negative pressure wave can be timed to arrive at the exhaust valve during the camshaft valve overlap and ‘scavenge’ the cylinder of exhaust gases and start to pull through fresh air/fuel mixture into the cylinder even before the piston begins its intake stroke. This tuning occurs over a narrow engine rev range with tuning done by shortening the pipes to raise the rpm at which this ‘resonance tuning’ occurs and lengthening them to bring the effective range lower. Some current competition cars have variable length pipes to tune the exhaust to engine speed, similar to variable valve timing.

As the exhaust flow acts like a single column of air moving through the pipe, if all of the manifold pipes are an equal length from head to collector, then the exhaust pulses will be sequentially fired into the collector, maintaining a smooth flow. The inertia of this column of gases draws an additional intake charge through the engine during valve overlap. This principle has led to some absolute masterpieces in complex welding to get all of the pipes to equal lengths in a confined space. These equal length, short runners on the exhaust manifold are also a serious consideration on turbocharged engines like the new BMW 4.4 V8 turbo where the high pressure pulses arrive at the turbine in a regular resonance, helping to spool up the turbo smoother and faster rather than the irregular pulses from an offset, remote, cast manifold. These principles have also led to the term ‘scavenger’ exhaust system design, the first being produced by the motorcycle tuner Russ Collins in the 1970s where a four-in-to-one was successfully designed to increase the performance over a factory fitted four-in-to- four system. Here the principles of scavenging produced an increase in power over the four individually tuned single pipes and this design is almost exclusively seen today on high performance motorcycles. One of the main power-killers of recent factory manifold designs is the close coupled catalytic converter. Here the cat is mounted as close to the exhaust port as practical to get the cat to operating temperature as quickly as possible, reducing emissions, and this heat robbing restriction has some significant effects on performance.

Collectors are the method by which the exhaust downpipes combine to become a single pipe. Some designs stack these collectors, so a six-cylinder car could go as a six-into-two-into-one, effectively putting the three firing cylinders 120 crank degrees apart into a collector of their own whilst increasing the effective pipe length to increase low rpm power. The collector should also have an exit diameter sufficient to flow the sum of all the inlet pipes to prevent any back pressure. Many collector manufacturers go to extreme lengths to ensure the smooth transition from the multiple inlet pipes to the outlet pipe with early collectors being ported and nowadays gas purging during welding is used to eliminate any weld spatter from forming on the inside of the collector during manufacture.

In general, large diameter, short pipes favour high rpm race engines whereas longer pipes and smaller diameters increase the inertial scavenging effect, increase gas speed through the pipes and favour road cars where fuel consumption is a consideration. Larger diameter downpipes, which slow down the flow of gases through them, cause problems at lower rpm use because there is insufficient inertia to evacuate the cylinder and exhaust backpressure can cause a flow reversal with long-duration high-overlap cams, allowing the exhaust gases to start to pass into the inlet tract, past the inlet valve. The use of anti-reversal techniques such as exhaust downpipes larger than the exhaust ports giving a sharp step, or by welding a direction-sensitive cone within the mating face between the downpipe and the head to allow a full exhaust gas flow down the pipe but offer a resistance to reverse flow. In effect, a one-way valve for exhausts!

There is no formula to easily find the correct combination of pipe length, diameter or design as there are just too many variables within the engine to do so. Cam timing and choice are probably the most crucial component in the engine to control where peak torque and power occur, and the inlet and exhaust system need to work with, and enhance, those figures. If you design and develop the perfect exhaust manifold for your engine, and then change cams, you will have to start all over again to find that sweet spot. Commercially available tubular manifolds will have generally had considerable time spent in development to suit the most common application and to get the most from the vast majority of owners’ engines, and some systems will be designed so that the more modification and tuning you do, the closer you get to the ultimate design specs of the system.