Tech Guide clutches in all their glory 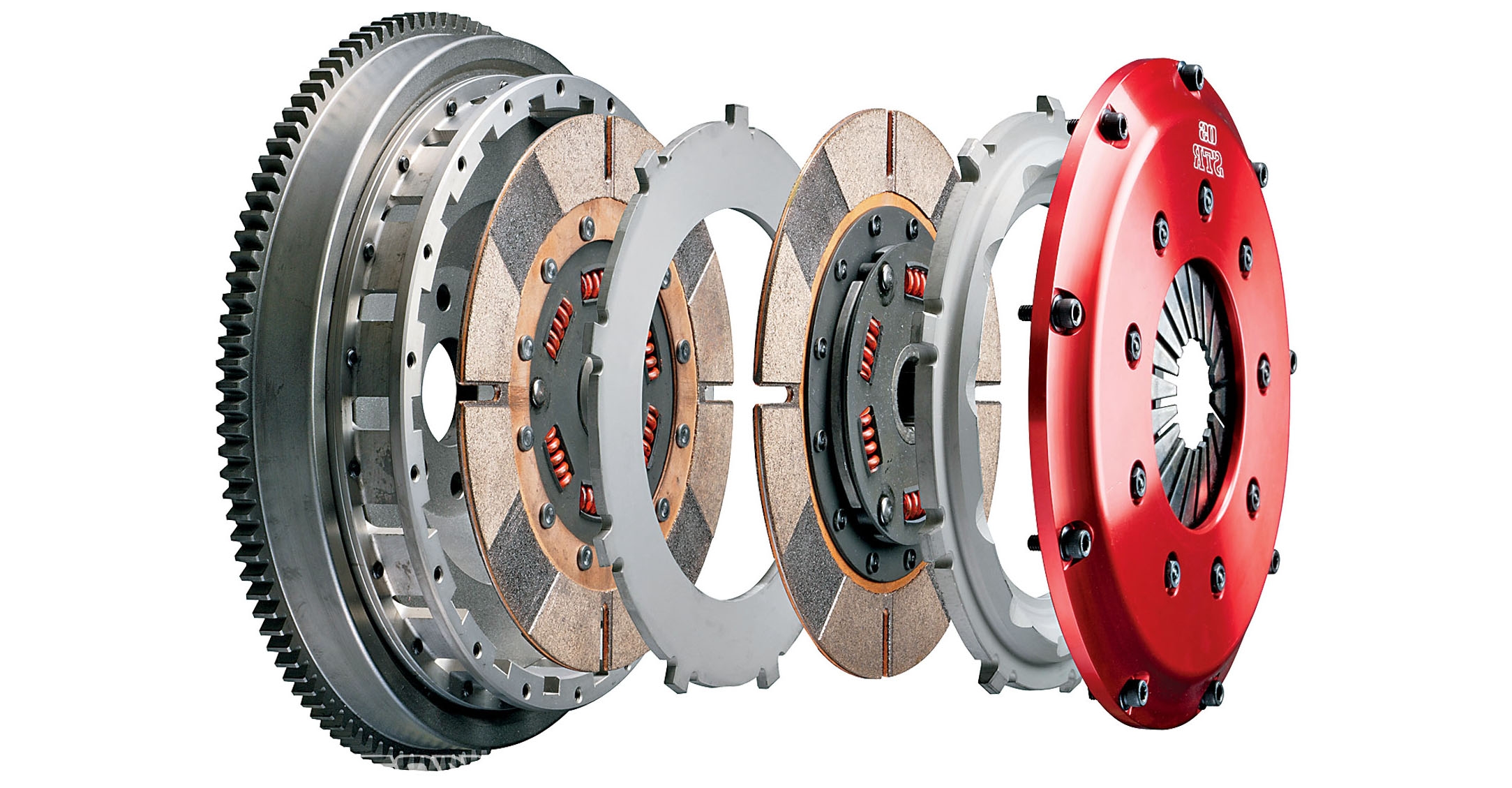 What is a clutch? A clutch as fitted to a motor vehicle is a mechanism by which the vehicle mechanically connects the spinning engine to the transmission to transmit the power produced through the gearbox to the wheels.

The latest development to be introduced to the production car market is the dual clutch transmission, a technology that uses the principles of both the manual and automatic transmissions and is known by different system names by different manufacturers but DCT is probably the most recognised. On a simple manual transmission, to select gears as vehicle speed increases the driver operates the clutch pedal to disengage the engine power from the transmission, removing load between the gears to enable the driver to manually disengage the current gear and then select the next desired one. The clutch is then released, re-engaging the engine power to the transmission to continue. This all takes time and effort and in the time taken to shift gears, there is no power delivered to propel the vehicle.

In the DCT transmission, there are two independent clutches, one operating the odd gears and the other the even gears. The gear changing is controlled by an ECU, as in the automatic transmission, so there is no clutch pedal. The clutches are a wet, multiplate design, similar to a motorcycle, where the clutch ‘packs’ are immersed in transmission oil to increase cooling capacity. When shifting from one gear to the next, the two clutches select two gears at the same time and power is transferred from one to the next very quickly without disengaging the drive between the engine and the vehicle. Using the ECU to control this, the gearshifts are very fast, fractions of a second in fact, and the power is always available to continue powering the vehicle.

This type of transmission is known as sequential as the transmission must select the next gear in the ratios, either up or down whereas the fully manual transmission can go from fifth gear to first in just one gear change.

There are a number of considerations to be made when selecting an appropriate clutch for any particular application including smoothness of operation, temperature range, power and torque handling, longevity and bedding-in mileage.

On a factory-fitted clutch, the priorities are completely different from the performance clutch market. In a factory model, the clutch must be as smooth and quiet in operation as possible with a power and torque handling marginally higher than the engine output. Running-in time needs to be non-existent as an owner will expect the clutch to operate perfectly straight after installation. Setting these as the most important parameters gives the performance tuner problems from the outset. As soon as the power is increased, the clutch may slip causing severe overheating and, ultimately, clutch failure. The materials used will be for normal road use and the material used will overheat and burn-out, and wear rate will be excessive.

There are a number of methods to increase the power handling of the clutch. The easiest method is to increase the friction area of the clutch by either increasing its overall diameter or by using more than one centreplate. The manufacturers use these methods commonly on performance models because the friction materials can still be quiet and hard wearing without adversely affecting pedal feel.

Alternatively, the force exerted by the pressure plate can be increased but this leads to increased pedal force required to operate it and is one of the reasons why in recent years the clutch cable has given way to the hydraulically-operated clutch, first by using a hydraulic slave cylinder and then, more recently, a hydraulic thrust bearing as engine outputs have increased.

Another problem with increasing clutch diameter is the inertia it adds to the flywheel. As the diameter increases, so does the weight, and the larger the diameter and the further out from the centre the weight is, the more the inertia will increase significantly. Some aftermarket performance clutch suppliers offer aluminium pressure plates to help combat this where the cost or availability of a multiplate option does not exist. The solution for this, which is often used in racing, is to use a small diameter clutch with multiple centreplates, similar to a that on a motorcycle, using a custom-made flywheel. In Formula One a tiny 4” diameter, multi-carbon plate clutch weighing around 1.0kg can support 800+hp, whilst a typical BMW 300hp factory 11” clutch will be over ten times that weight, with 90 times the inertia!

Tuning the engine performance beyond the manufacturer’s design is hugely common with the advent of the performance remap, or traditionally, as engine systems tuning from exhausts and intakes, to cams and pistons. This has always shown the clutch to be wanting as soon as the power has been uprated noticeably, especially with the increased torque from boosted diesels, and in extreme cases with the addition of forced induction, doubling power outputs is not unusual.

In these cases, it is seldom possible to increase the clutch diameter unless another model in the range used such a clutch and flywheel, so either a multiplate clutch (such as a twinplate conversion) or uprated pressure plate is used. However, we can also increase power handling by changing the materials used in the friction plate for a higher friction coefficient ‘grabby’ material, and this can also be selected for the type of driving we expect to use the car for.

To select the clutch, we need to estimate how much power is required to be transmitted and take into account the way the vehicle is used (i.e street, track days or some form of racing?).

Let’s assume we are looking at various stages of tuning for the E46 M3, a hugely popular car with numerous tuning levels. Let’s start with the stock vehicle at 343hp. We want to select the clutch we really need as the clutch characteristics get less and less user-friendly as we go for higher outputs.

The first material we see is used for the OEM clutch, and these are ‘organic’ materials (like CF Aramid) and have long life, quiet operation, require no running-in and will recover fully from occasional overheating. When used with an uprated pressure plate, this is the perfect choice for street use and with a slightly uprated pressureplate will be good for 400hp. Kevlar clutches are both durable and retain the feel of the standard organic clutch but will glaze if used consistently in stop/go traffic. However they will return to normal again once driven hard enough to remove the glaze. Once overheated, though, the clutch will not recover and will need replacing. They usually need around 1000 miles to bed-in properly and are useable on the street but are better suited to track day use or weekend fun on cars making up to 500hp.

A ‘paddle’ style clutch will dissipate heat better, reducing the possibility of overheating. These paddle clutches have separate segments – usually three, four or six instead of the fully circular material seen normally. Paddle clutches can cause clutch judder on take-up so are not recommended for the street with the greater number of pucks being the smoothest to operate. They’re great for track use but approaching the limit of what is acceptable for the street. Carbon ceramic cerametallic clutches use very high temperature materials but clutch engagement is abrupt as the material grabs rather than slips. The material will wear the flywheel unless a carbon-only centreplate is used. Clutch judder is common and this style of clutch is normally the paddle type. Clutch material causes some noise during engagement. Uses include heavy track use or drag racing. It’s very durable but beyond the limit of what is acceptable on a street car. It’s best suited for a car making up to 600hp. Finally, a sintered iron clutch is an extremely high temperature material but will wear the flywheel very quickly and clutch engagement is sudden, like an on-off switch. It’s designed for high power endurance racing engines making in excess of 700hp.