With the launch of the M2, many agreed that BMW had indeed rediscovered the mojo behind chuckable greats like the E30 M3 and M Coupé. A compact package (with a small ‘c’), a sublime chassis, and a simply operatic and energetic powerplant. In all the right ways, it was very much 1986 all over again…

An entertaining car deserves an entertaining soundtrack, so understandably, many M2 owners are making an exhaust upgrade the first box they tick. The factory soundtrack is pretty decent out-of-the-box – but who doesn’t want a little more of that? Or, better still, a few extra ponies to boot? 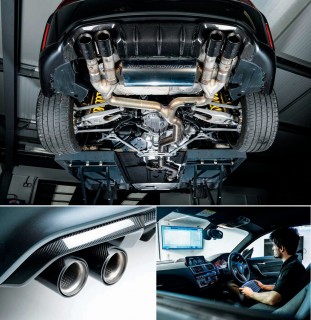 Gloucestershire-based tuner Litchfield was one of the first UK outfits to take delivery of an M2, following a simply joyous development period with its previous M235i, which proved to do everything brilliantly (particularly when tuned) and became a rolling test-bed for all that the firm now has to offer. Knowing its clientele would soon be wanting to up the exhaust ante, Litchfield ordered its M2 with the BMW M Performance exhaust, as well as obtaining an original standard system in order to allow it to do a true back-to-back test alongside the Akrapovic system it’s going to offer as part of its M2 tuning programme.

In each case, the options would be test-fitted, run on Litchfield’s super-accurate twin-retarder Maha dyno setup and then analysed for noise, torque and power. In addition to that, the ‘X’ factor would also be taken into account (namely does it look and sound good?). A subjective measurement, of course, but perhaps the most important one of all.

To begin with, the original system was put back on to set a true benchmark. As you might expect, and with tongue firmly in cheek, this fitted very well indeed… almost as if the factory had put it there, in fact. A swift dyno run revealed the car to pull almost a precise factory output figure of 363hp (the factory quote 365hp) All ship-shape so far. Next up was the rather lovely looking BMW M Performance Exhaust package.

Specify this at your local dealer and you’ll walk out some £2900 lighter (or £2600 if you opt for the plainer titanium tailpipe trims). Expensive, yes, but what you get in return is rather special. Fit and function is perfect and the way that the trims sit neatly in the rear bumper aperture is a thing of beauty. This upgrade is a great example for sticking with the mighty ‘M’, with beautifully finished carbon outer trims and welldetailed embossed logos to show your friends that you’ve made a good choice. To be fair, though, that last point is not really required – all you really have to do is start the thing up; the sonorous burble will tell them all is not stock underneath. The M Performance upgrade offers more of everything the factory system has: a nicer, deeper bark and growl, a fabulous rasp through each gear, and the feeling that the car is faster somehow. Well, loud exhausts always sound faster don’t they? 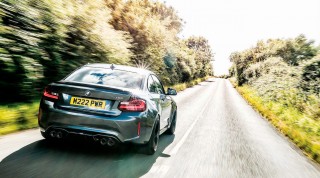 BMW markets this part as a styling and acoustic upgrade, making no claims of increased performance in any way. And on that basis, it scores full marks. It looks brilliant, it sounds awesome, and it really suits the car. And that’s the only down side to this upgrade, really; despite ticking almost every visual and aural checklist, it just doesn’t offer any dynamic increase. So where does that leave the enthusiast that wants all of the above, plus a little extra shove at the same time?

According to Litchfield, the answer comes from Akrapovic – a name that should need little introduction to the well-heeled enthusiast. As with many things in life these are not cheap upgrades but it’s fair to say that one does tend to get what one pays for at this end of the market. Going toe-to-toe with Munich’s finest is the admittedly more expensive – and wonderfully light – Akrapovic Evolution Line titanium offering. Even in this day and age there’s definitely still a car park cache to wonder materials like carbon fibre and titanium, and these systems also offer a very distinct sound due to this metallurgic wonder having very different resonant frequencies to either steel or stainless. 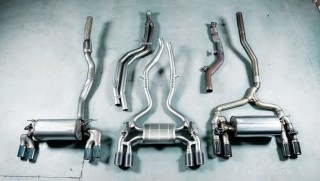 That weight loss isn’t just a gimmick either, with this system hitting the scales at a useful 5.3kg less than the original offering, meaning that it will lower the overall mass of the car, ultimately playing a small part towards an overall improvement in dynamics. As with the BMW parts, full ECE approval comes as standard (one simply doesn’t want any MoT or TüV faff when one has upgraded thus) and the whole setup was designed and dyno’d to work perfectly with the TwinPower Turbo six’s powerband – and that’s evident when you have a good squint at the system alongside the other two. The Akrapovic features two separate tubes from the downpipe to the muffler, unlike the car’s original single-tube configuration. Akrapovic says is offers more flow with visually-pleasing mandrel bends quickly egressing the spent gasses away with the minimum of restriction.

Fitment-wise it went on just as easily as the previous two choices which, at a not insubstantial £4491 (inc. VAT) plus fitting, you really would expect it to but details like the simple ‘plug ’n’ play’ hardware to instantly integrate it into the factory EfficientDynamics system make it clear that it’s all been well-thought-out. 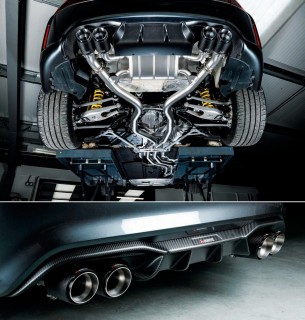 Once fitted up and settled on the dyno we were all keen to hear how it sounded – the M Performance system having set a high benchmark. At low speeds, the system has a neat, clipped tone that sounds delightful without introducing too much noise into the cabin. Pile on the revs a little, however, and that wonderful titanium ‘ring’ makes itself heard through the now fully-open valves. It really does sound different, this system, and there’s a definite race car edge to the upper reaches of its range, without the vibration or harshness of a competition machine. After a few pulls to guarantee accuracy, the figures came in, with the Akrapovic netting a most useful 10hp hike in power, accompanied by a helpful 15lb ft dollop of torque throughout much of the rev range. Not rocketship numbers, admittedly, but highly respectable for a half system like this – and something that was immediately noticeable when testing was transferred out onto the road.

Here, the system really proved its worth – and ticket price – in equal measure. At low speed, and while running around during ‘normal’ driving, it’s an exceptionally civilised affair. Prod the volume switch – or throttle, as it’s more commonly known – and things start to get quite exciting, quite quickly. There’s a fabulous snarl up through each gear, arriving at a barking crescendo that really makes the little M2 sound like something from Maranello, rather than Munich, which certainly adds to the sense of theatre and sheer spectacle of the whole thing. Aldo Gucci famously rehashed Sir Henry Royce’s motto as “quality is remembered long after price is forgotten” and I think it’s the perfect maxim for this system.

The fun doesn’t end there, of course. For those needing even more power, Litchfield can offer even better flow with the addition of either sports catted or decatted downpipes, making the car more than ready for even greater power courtesy of a remap. Or, if it’s the aesthetic beauty of this system that tickles your fancy, you can go another step with the rather saucy addition of the rear carbon fibre diffuser, as fitted to Litchfield’s own car. Available either in gloss or matte finish it certainly adds a more aggressive demeanour to the rear of the M2 and really provides the perfect framework to display those beautiful tips. And besides, when you’ve splashed out this much, what’s another £891 between friends? And if you’ve been seduced by the BMW M Performance exhaust there’s also its own carbon diffuser to consider at £880, too.

To conclude, then, it’s basically a series of rising positives, depending on your budget! In standard trim, the ‘basic’ M2 is probably all the car you’ll ever need. Add a dash of BMW M Performance style and sound and you’ll revel in a newfound sense of driving immersion or, dig deep, go for the Akrapovic and liven-up every commute with the titanium equivalent of the London Symphony Orchestra beneath your right foot – with the added option of an extra couple of minute’s lie-in each morning. Whichever way you go, you’ll be happy, but if you can stretch to titanium we reckon you’ll be delighted…

The Akrapovic titanium Evolution Line exhaust also sounds excellent and offers a modest power and torque uplift, too. The BMW M Performance exhaust fits like a dream and looks the business; sounds pretty awesome too. The standard BMW exhaust system is perfectly up to the job but is a little bit light in the aural stimulation stakes, particularly from inside the car.