Swede dream. When two Scandinavian enthusiasts wanted to build a sports-racer, they naturally looked to Maranelio for inspiration. James Elliott explores the fascinating history of Ockelbo. Photography Tony Baker. Even in West Sussex the day before the Goodwood Revival is to kick off, when public awareness is more attuned to seeing unusual machinery on the roads, we are causing a bit of a stir. It’s hard to get our photoshoot done with so many passers-by stopping, pointing and taking their own cameraphone shots. And who can blame them? After all, even around Goodwood at this time of year the sight of a Ferrari 500 Mondial on public roads is a bit special.

Except that nobody notices that this is not one of the super-rare Maranello sports-racers – it is an Ockelbo. A what? An Ockelbo, named after the hometown of elite Swedish racer and would- be motor magnate Erik Lundgren who, with Lennart Gustafsson, had been hatching a plan to build his own sports car since the beginning of the 1950s. By 1956, they were ready to get going, quickly abandoning plans for an aluminium bodyshell when Gustafsson discovered the Microplas Mistral in the UK.

Following discussions with the British company, however, Lundgren and Gustafsson – concluding that the Mistral looked like a Ferrari Mondial – decided to take a different route. They moulded their own body directly from Ulf Norinder’s 500 Mondial (chassis number 0580MD) using Lundgren’s friendjo Bonnier as an intermediary to get permission. After a one- day crash course in dealing with glassfibre, the pair got to work, sadly messing up the paint on Norinder’s Ferrari in the process. 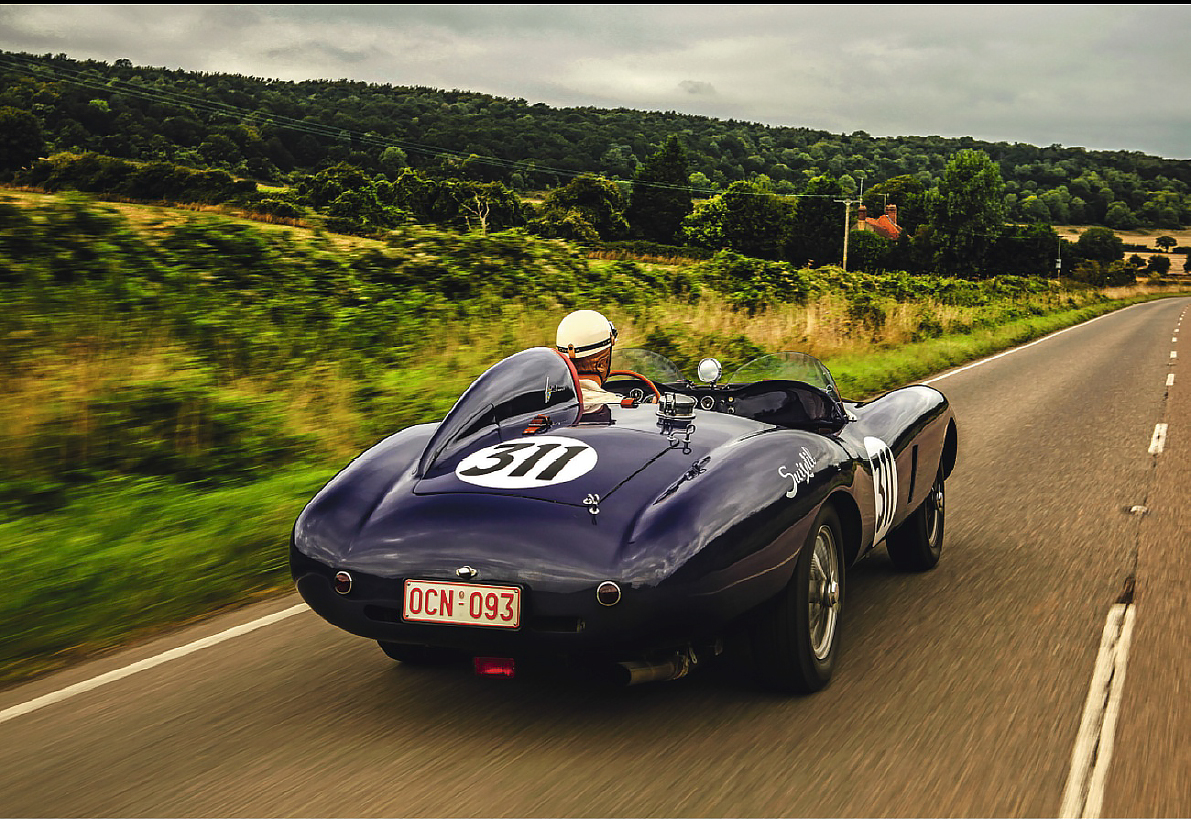 Sublime shape has been painstakingly restored. The abandoned bodyshell was discovered with a tree growing through it.

The first body went on to Peugeot 203 mechanicals and a home-made (by Gustafsson) frame; it was called the Peugeot-NARDI. Next to be built was Lundgren’s own car, using a burnt-out Alfa Romeo Giulietta Sprint Veloce as a base. With Lundgren racing it and the Swedish motoring press providing coverage, interest in the Ockelbo started to grow, culminating in an appearance at the I960 Geneva Salon. 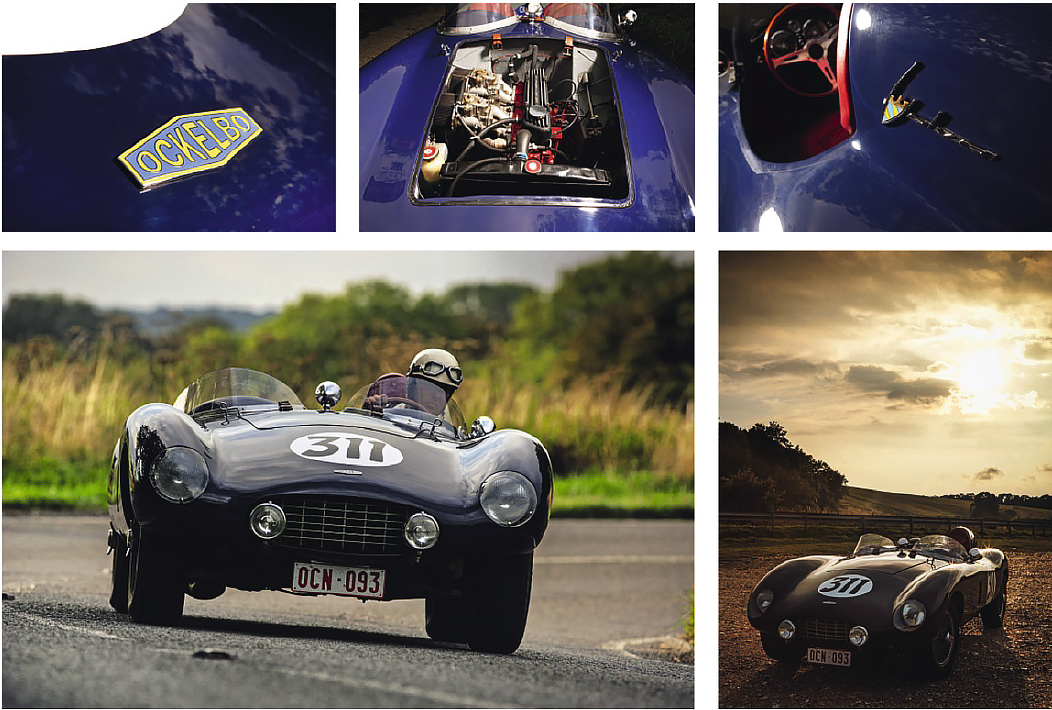 Lundgren was soon selling the shells for 1475 Swedish Krona to be fitted on a huge range of chassis including Alfa, DKW, Volkswagen, Healey, Simca, Volvo and Peugeot. So convincing were they that one was even used to rebody a genuine Mondial! In all, some 50 bodies were made, 20 of them becoming cars – and only 12 of those are known to survive.

You may have seen our featured example before. In June 2010, this very car appeared in the Lost & found section of C&SC. Belgian owner Stoffel Mulier has been a Volvo fanatic for years and previous projects have included a Coune Amazon Convertible, but when he saw pictures of a mystery Volvo special racing, his obsession with it became all-encompassing.

I had to have one, but it took me years to even find out what it was,” he says. “When I did, the hunt started to find one.

After three years of research, he had ascer-tained that the car was the Volvo-powered Porsche-alike of fellow Belgian Lambert Dock, which had long since been destroyed. Then a friend mentioned that it looked a lot like an Ockelbo. The quest restarted with a new quarry.

Mulier finally tracked down his Ockelbo in 2008 but it was in a sorry state. Disinterred from a Swedish barn where it had lain for 30 years, it was based on a 1953 Healey, but the glassfibre body was found to be in terrible condition and had been badly modified.

“I couldn’t really continue without finding another body,” adds Mulier, “but extensive searches across Scandinavia proved fruitless. Eventually – and ironically, I suppose – when we tracked one down it was local to me! It had been resting for 30 years after the owner had bought it as a Ferrari Monza body. We had to cut a tree down to get to it, but I then had a weather-battered, blistered but complete, original and unused shell.”

Mulier completely stripped the Ockelbo to give it a ground-up, 2000-hour restoration, doing everything himself except the paint. It was barely finished when his self-appointed deadline fell. As a result, its maiden voyage in August 2012 was a 3000km epic from Belgium to Sweden for Volvo’s 85th-anniversary celebrations: “At the 80th I had promised that I would be at the next one in something special and I was… just.”

Since then, the car has been all over Europe, including trips to Mulhouse for a hillclimb, Techno Classica in Essen and – most appropri-ately of all considering Mulier’s statement that “for me it is a time machine, when I step in I just go back” – to the Goodwood Revival.

And here it is, having been driven from Belgium this morning and causing the habitual furore en route, but Mulier is used to that. I am not, though I can understand why so many people flock to the Lobelia Blue (ala Healey 100S) stunner.

Clamber into the Ockelbo and it is surprisingly comfortable. In front of you, beyond the flat, three-spoke steering wheel, are three big dials from a Merc SL, including a 220kph speedo and a rev counter that runs to 7000rpm with the red zone starting at 6300rpm. The pedals are offset to the left, but a thickly padded, fixed – luckily I am the same height as the owner – Healey-sourced seat that points you towards them diminishes the effect. AH are floor-mounted, and the clutch can be described only as ‘fold-flat’.

Behind you on the fairing is a nice touch of class, the owner-added Pelle Petterson – designed 1957 Volvo badge. As Mulier has proved, the stowage is ample for trips away as well as hosting the spare wheel – even though it : is not as much fun for Mulier’s usual passenger Geert Collaerts, the owner having restricted legroom for his co-pilot in order to give himself : easier access to the fuses and engine.

Fire it up and it spits impressively out of the single pipe, but moves off with the civility that you’d expect from a hot Volvo four-pot. Working through the gears, the ’box is tight and, though reverse is tricky, the rest are very usable – sporting even – in their H-pattern gate. Just when it starts to get flustered, you discover over-drive on top making it very pleasant for cruising at speed. Except for the wind: those aeroscreens are useful, but do little to stop the buffeting.

Running on 72-spoke Healey wheels shod with 185/70 R15s, this supremely torquey car features a harsh ride. Aided by a stronger anti-roll bar, however, the leaf-sprung live axle (over rather than under the chassis) responds better than expected to hard work and dodgy road surfaces. Not surprisingly, just like a Healey.

As is the non-powered steering that is not exactly heavy at low speeds, but on the move is wonderfully weighted and full of feedback. 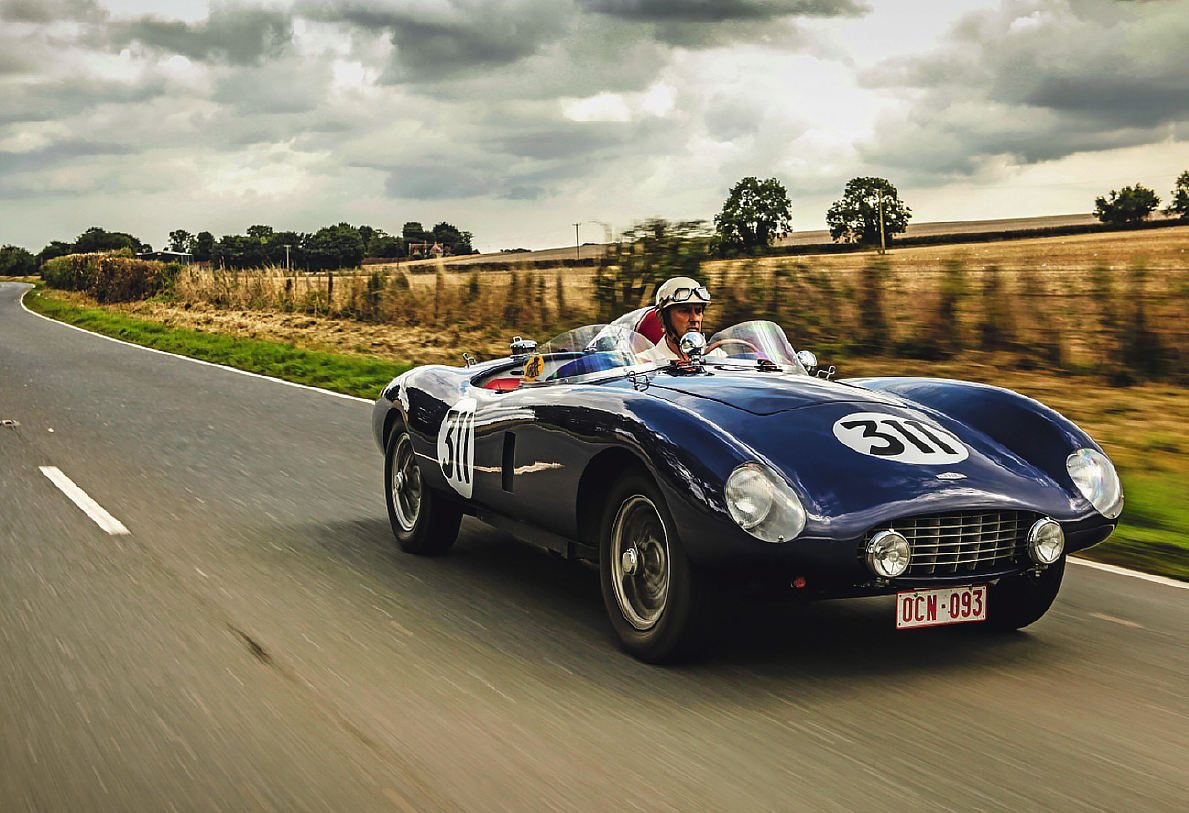 The adrenalin rush when you get up to speed on fast roads is scintillating. 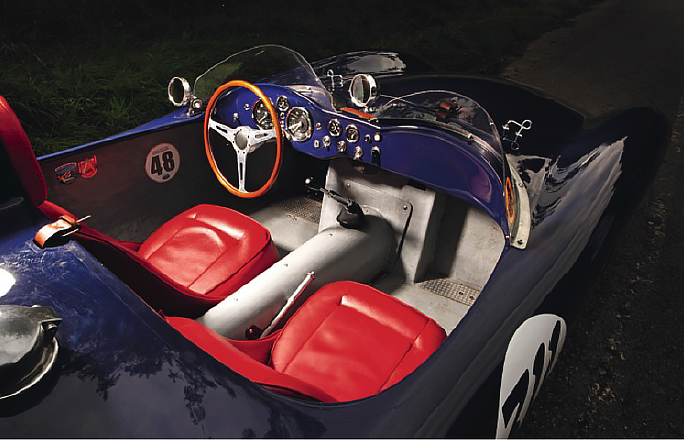 Lack of doors hinders entry, but cabin is comfortable. Below as found – the modified body had to be discarded.

It kicks back only on the worst of bumps or potholes, but the rest of the time demands plenty of minute adjustments. The similarity continues with the engine. The B18B 2-litre Volvo unit – as used in the P1800 and obviously corresponding to the Mondial’s 2-litre ‘four’ – may not rival the capacity of the powerplant in the four-cylinder Healeys, but it shares the same urgent blat and sense of unbur-stable strength. With its sporty camshaft, big valves and twin Weber carburettors offering in the region of 150bhp – and with only 800kg to propel – it can be fearsomely fast, too. The rush of adrenalin – plus air and noise – when you get up to speed on country A-roads is scintillating.

It can be thrilling in the corners, too. You sit very upright and it is easy to place the wheels right on the apex thanks to those wings, and then catch a glimpse of tyre peeking out when you turn in hard. The fact that it is technically front- mid-engined, with the entire motor sitting behind the axle line, gives excellent handling and balance. It’s difficult to gauge the impact of the well-ventilated rear drums because the progressive front set-up, now discs instead of the original finned aluminium drums, is exceptional.

Mulier reports that, despite the car being “pure fun”, economy is bearable too. When he first got it on the road the Ockelbo was going through 20 litres of fuel every 100km but now, with plentiful use of the overdrive, that figure has been halved on motorway trips.

Despite the rather conspicuous origin of its shape and such lifted trademark giveaways as the egg-crate grille, the Ockelbo is really a rather lovely thing in its own right. Unlike so many clones or replicas, it brings to mind the Westfield Eleven, in that is has its own distinct personality despite what it looks like.

All that is left to explain is the number the car wears. Given the sort of character that Mulier clearly is, it is no surprise that there is nothing random about it: “A very good friend, Jos Guelinckx, used to share our motoring adventures and loved driving cars hard, but died way too young, at 53. He worked for a breakdown recovery company and his call sign was 311 so this way he still joins us on every trip.

The man behind the Ockelbo

Born in 1919, Erik Lundgren started racing and rallying as soon as he passed his test and excelled at ice racing, becoming famous across Scandinavia for his giant-killing drives. The first car he constructed was the 1938 Ford-based EL Special, featuring a body by Jarbo and a flathead V8 with Ardun heads and eight Stromberg carbs.

Over eight years, Lundgren – who became known as the trollkorlen fran Ockelbo (wizard from Ockelbo) – won 45 races in it from 75 starts.

In 1955, he drove a 300SL for Mercedes in a sports-car race at the Swedish GP and, having passed ‘Taffy’ von Trips, had a ding-dong battle with Karl Kling. He impressed team manager Alfred Neubauer so much that he was invited to drive the car twice more. Other significant outings included a Ferrari 750 Monza in the 1956 Swedish Grand Prix, where he won his class.

It was via the racing scene that Lundgren met Lennart Gustafsson and the two decided to pursue their dream of building a sports car. After Ockelbo, Lundgren carried on as an engine tuner and went on to build boats and snowmobiles before dying of heart failure at the age of 48 in 1967. 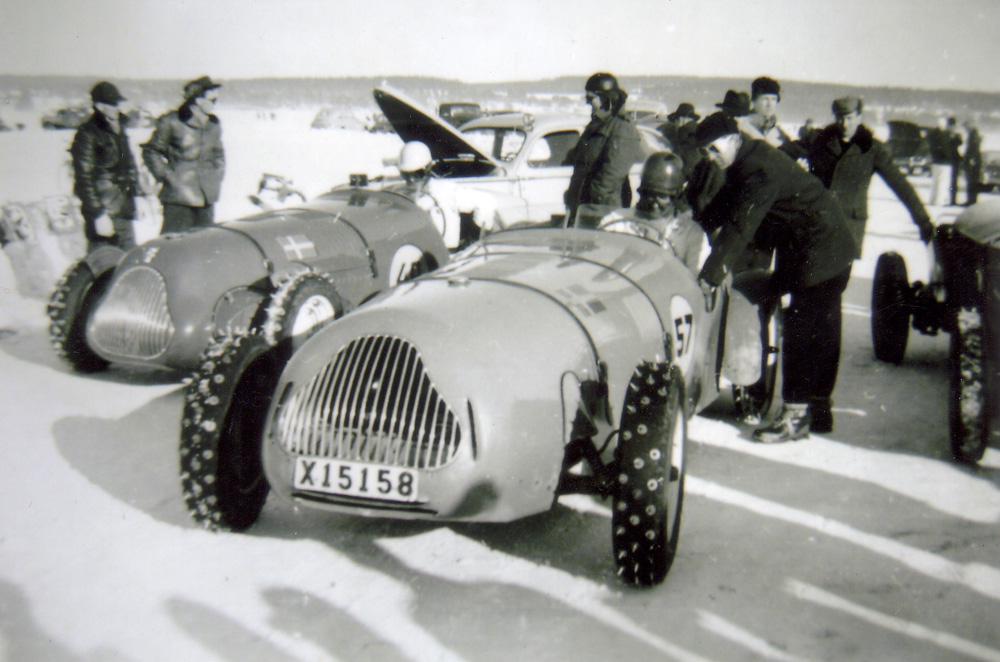 From above: Lundgren in his V8-powered EL Special; perched on a 300SL during his outings with Mercedes; Ockelbo splits Lotus pair at Denmark’s Roskilde Ring.