Pre-dating the Range Rover by eight years, the Jeep Wagoneer blazed a trail for the SUV onslaught. Martin Buckley heads Stateside. Photography Pawel Litwinski. The name alone is a work of genius: Wagoneer. It makes you think of the wide open spaces, the rugged outdoors and the vastness of American frontier country. A giant V8 wagon that can cruise you and your wholesome family down a freeway in comfort then whisk you through the wilderness, across a desert or to a log cabin by a lake where you might not see another person for days. The Kaiser Jeep Wagoneer really was something new that boasted a combination of power, traction, size and comfort that had not been seen before.

With six seats, a vast load area and handy electric drop-down rear door glass, it could go shopping as well as any other American station wagon – or as Road  Track put it: ‘Take your wife to a PTA meeting’ – but equally its four- wheel drive and generous ride height could get you out of trouble in Deliverance country.

Handsomely angular and powered by a V8, the Wagoneer sounds like a formula for an American Range Rover, but really the reverse is true. These cars pre-dated the market-defining British luxury off-roader by eight whole years, and enjoyed one of the longest production runs in American history. 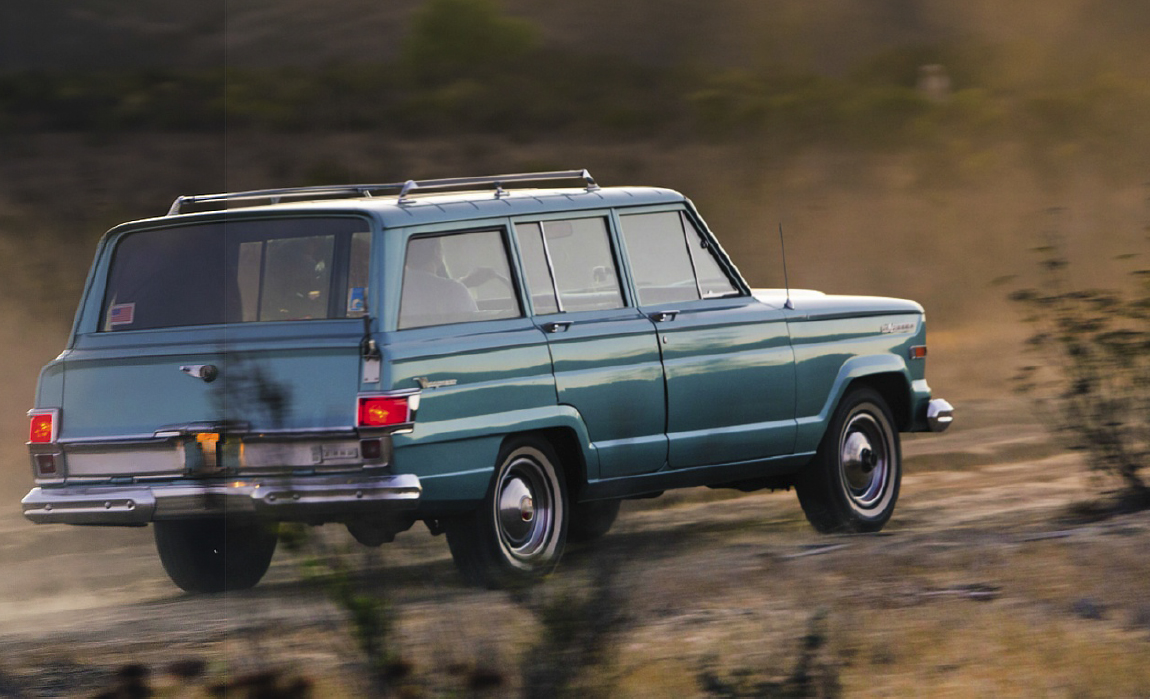 The early Wagoneers represent the model in its purest and most desirable form.

The irony of the Wagoneer’s 28-year stint is that it was conceived by Brooks Stevens, the man who coined the term: ‘Planned obsolescence.’ Apart from his risible Excalibur ‘neo classic’, the Wagoneers are probably Stevens’ most famous automotive conception. He truly was an all-round industrial designer cast in the mould of Raymond Loewy, shaping railway observation cars, kitchen appliances and dipping in and out of packaging and architecture.

In the UK, we only really came to know the Wagoneer mid-career, although a few early ones did make it here. In 1964, Autocar tested – and was impressed by – the example that the Bamfords of JCB fame imported. By the 1970s, they had become encrusted with fake wood and ugly wheels and were briefly trendy transport in the UK for those who wanted a flamboyant 12mpg alternative to a Range Rover – or couldn’t be bothered to join the waiting list for one. If you had a penchant for Smokey and the Bandit, CB radio and country songs by bearded men themed around bar fights, then a Wagoneer (or its two- door Cherokee sibling) was a dream car.

But it is the clean-looking Wagoneers of the 1960s that have always intrigued me. The two featured examples represent the model in its purest and, to me, most desirable form. We plucked them from the huge Mike Malamut collection: an early car with the AMC ‘Vigilante’ V8 and vertical front grille; and a 1969 example with the Buick engine and the more familiar horizontal front-end treatment, which was retained in various forms through to the end of production. Interestingly, the Wagoneers never grew ugly impact bumpers or many of the other more extreme examples of Federal safety laws because, being classed as commercial vehicles, they were largely exempt.

That Jeep, the world’s largest manufacturer of 4×4 vehicles, already had ambitions to build a multi-purpose car that could go as well on-road as it did off was illustrated by its long-lived but somewhat unrefined Station Wagon, which was introduced in 1946 and produced until 1965. Homely and half-timbered, they had a certain rugged appeal but the engineers at Toledo knew that they had to start with a clean sheet if they were going to build a four-wheel-drive wagon to satisfy the expectation of the 1960s.

Allegedly the result of a $20m development programme, the first Wagoneer variants came only with six-cylinder engines giving 140bhp from 3.8 litres, but were unusual in having an overhead camshaft – the only such American engine at the time. Features such as an alternator and 30,000-mile chassis lubrication intervals were rarities in the early ’60s. Much more significant was the fact that the Wagoneer was the world’s first four-wheel-drive automatic (there were no factory auto Range Rovers until the ’80s), but it’s worth recalling that these early Wagoneers were not permanent 4x4s: you had to manually engage the front-drive transfer box when you needed power to all wheels. 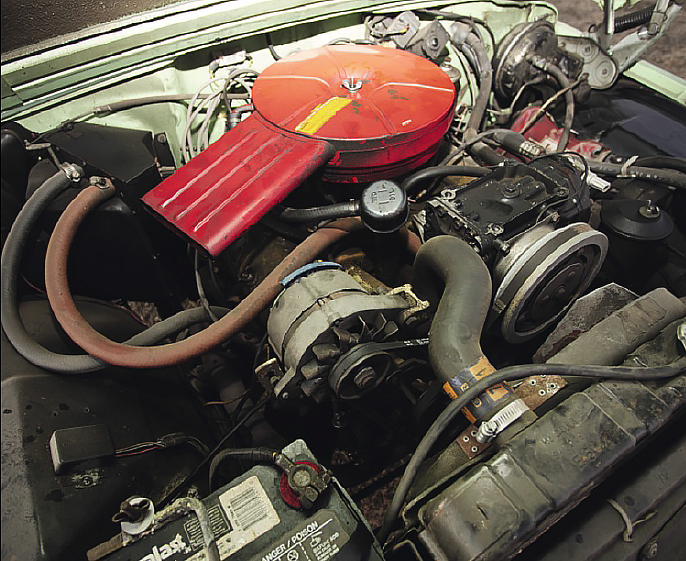 The Wagoneer came with a huge range of engines. The ’65 car (above) has the AMC Vigilante V8; the later version (right) features a 350cu in, 230bhp Buick unit that was less powerful but produced more torque.

These 1960s Wagoneers look vast – by UK standards they are – but to a certain extent that is a visual trick because they create a smaller foot-print than a typical American estate of the time. They are 5in higher and 10in wider than a mid-sized Chevy II but only about the same length with the relatively modest overhangs essential to off-road manoeuvrability.

You climb in through wide-opening doors onto a slithery plastic bench seat and look out around commendably slim pillars over a large flat bonnet. Vision all round is superb, in fact, the body totally functional with a rear seat that flips down quickly or can be removed altogether to increase the already huge load space.

Our pale-green 1965 model-year Wagoneer is a column-shift three-speed manual with 29,000 miles on the clock and one previous owner, who ordered factory air-conditioning and power steering. I would imagine the latter was essential for those PTA meetings, but with five turns lock-to-lock you have to adopt a leisurely mindset and remember that your inputs have to go through three links, six balljoints and an idler arm before they get near the wheels.

You wouldn’t expect the Wagoneer to be a sharp drive, but neither is the handling all bad news because the thing sits firm on its semi-elliptic leaf springs so there is surprisingly little body roll. Brakes? In effect, the ’65 car doesn’t have any, its master cylinder rubbers having died; the ’69 model stopped well enough but I doubt that the 11in drums are the best feature of these 4200lb wagons when used vigorously.

Both accelerate briskly and feel livelier than the published figures suggest. The manual gearbox in the earlier car gives an added element of interest to the experience. Bottom gear is alittle hard to find but really the Jeep is not fussed about what ratio you are in and is seemingly happy, on the flat, to pull away from standstill in top. The separate chassis helps to filter out noise from the all-steel body and general refinement on the road must have been a revelation in a vehicle that was all about utility. The later automatic car simply underlines the refinement but is in other respects identical to drive, with the same massive steering wheel, utilitarian dashboard and practical PVC and nylon trim.

On paved roads at anything up to 90mph, or even over 100mph, only the back wheels of the Wagoneer are driven – unless you want to wear your tyres out while listening to the chatter of the transfer box and the wind-up as the axles fight each other. A lever on the transmission tunnel connected to the transfer box engages the front wheels and you can use it while the car is moving without breaking anything. Pulling the lever back through neutral engages Low, halving the maximum speeds in every gear but doubling the pulling power. To use this, you first have to stop and switch off the engine. The ‘N’ position was used to power a front winch if fitted.

We took both cars over some deep ruts on a patch of arid wasteland, which proved to be a fun, if not very scientific, test of the Wagoneer’s off-road capabilities – and it was a good way of raising some dust. Using four-wheel drive (but not low range), neither vehicle had any serious issues with any of this but you do tend to get thrown around and are aware of the axles noisily coming into contact with the body. A Range Rover would have tackled the same scenario with much less effort, but that’s not the point. The Wagoneer has a charm all of its own and, as the grandaddy of today’s luxury sport utility vehicles, the Range Rover owes it a debt.

The Wagoneer tale ranges across three decades and three different parent companies – Kaiser-Jeep, AMC and finally Chrysler – plus a variety of straight-six and V8 drivetrains. The early overhead-camshaft Tornado ‘six’ proved to be fragile and was replaced by the conventional overhead-valve ‘High Torque’ unit in 1967. Once V8s became available from 1965, they were preferred by most buyers, who could choose from an ever-lengthening list of comfort options such as air-conditioning, tilting steering wheels and fancy chrome roof-racks.

The V8s – AMC-Rambler in origin – were essential to maintain performance as weight increased. You could have two- or four-wheel drive, a solid front axle or independent suspension by torsion bars (this was dropped after a couple of seasons), plus three- or four-speed column-change manual transmission with a rather truck-like quality. There was an overdrive option for the two-wheel-drive manual. The early versions came in two-door and four-door forms, as well a long- or short-wheelbase pick-up called the Gladiator. There was even a panel-van version of the two-door.

The early models quickly evolved in response to buyers’ preferences. The $6000 Super Wagoneer of 1966, with its bucket seats and 270bhp four-barrel-carburettor engine, acknowledged an increasing need for luxury and power. The basic two-wheel-drive and two-door variants were dropped in 1967 and ’68 respectively, and by then there was a choice of 327 or 350cu in V8s, the latter supplied by Buick until 1971.

After that, Wagoneers were always AMC-powered, but with automatic gearboxes by General Motors. The straight-six lingered on well into the 1970s but the auto was standard on V8 cars by 1974. The full-time ‘Quadra-Trac’ system did not become an option until 1971. A casual look at the Wagoneer specification in the 1970s and ’80s shows how they got less powerful and even less efficient – a miserable 140bhp from almost 6 litres – as the worst of the Federal smog requirements began to take their toll. But they always commanded a certain respect in the four-wheel-drive world right through to the end of the line in 1991, by which time they had acquired the Grand Wagoneer name to differentiate them from newer species of luxury Jeep. 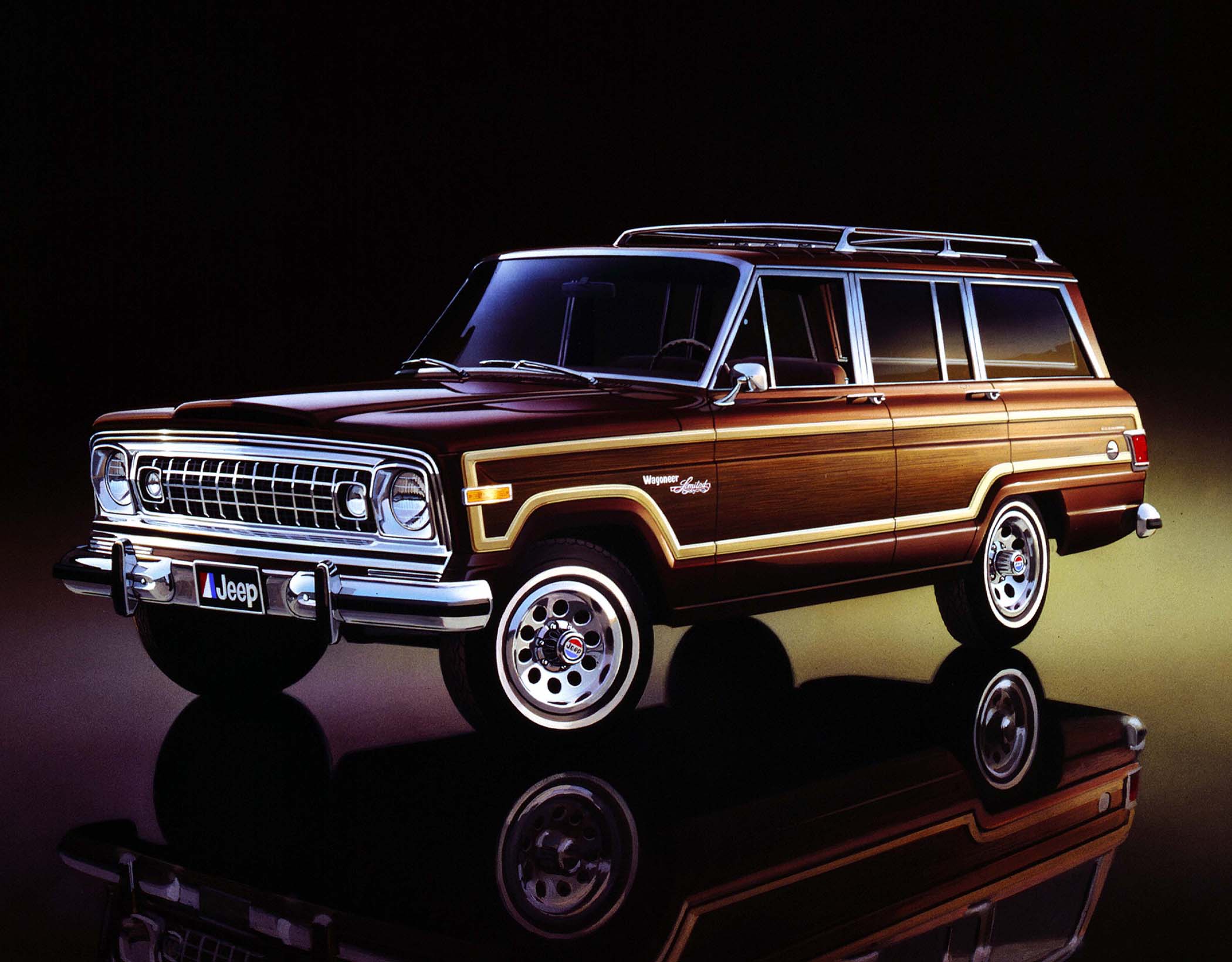 From top: high-spec Limited was added in the 1970s; Gladiator pick-up was the utilitarian choice.