We all have different routes into car ownership. The factors which influence and define what sort of cars we’re into are many and varied, and always uniquely personal. For Adam Masoura, it could all have been very different; his first car was a Ford Fiesta 1.1, closely followed by an XR2i 16v that he readily admits he’d love to still have today. But dinky Ford hatchbacks aren’t his true calling, not really. To get properly under the skin of his motoring proclivities, it’s pop legend Madonna whom we need to interrogate. “I remember the first E30 I ever saw,” Adam wistfully recalls. “It was red, it had a sunroof, and Madonna was blaring out of the radio. It was probably a 316i, I was too young to remember… but I do distinctly remember the look of that iconic front end.”

“ With power now well over the 200hp-mark it’s no surprise to see that JustE30z deemed it necessary to swap in an LSD and the 3.73 ratio ensures this E30 feels exceptionally lively”

It was inevitable that Adam would find his way into E30 ownership at some point in his life, and much as Madonna was keenly wailing ‘Express Yourself!’ round about the time the car we’re shooting today was first rolling out of the factory gates, so the future path was clear. “I’ve always liked the old BMWs, especially late ’80s and ’90s models,” he reasons. “The boxy, no-compromise design is timeless; car technology has moved on massively, which I think is a bad thing for those who love driving. I like there to be no computers telling me what I’m doing wrong, I like the way an old BMW can make you feel 10 years old every time you see one! Sure, I can appreciate exotic supercars and the like, but if one was parked next to an E21, an E28 or an E30 I would still be looking at the Beemer first.”

The car under the spotlight here is, in fact, Adam’s second E30. The first one he owned was a 325i Sport, something he bought on the logic that it was the best possible spec short of an M3. That car ended up running hot cams and a custom exhaust along with BC coilovers; his approach is that E30s are so beautifully balanced from the factory that they don’t need extreme mods or a huge amount of horsepower to make them perfect, simply a tickling in all the right places – a smidge of extra power, the odd chassis tweak, all to augment the sublime factory package. The Sport ultimately ended up moving on because, despite being as rotten as a pear, somebody offered Adam silly money for it and he just couldn’t refuse. He used the spoils to fund a brief dalliance with a VW Golf R32, but it wasn’t long before the yearnings for an old-school Bavarian fix started itching away at the base of his brain until, eventually, the cravings became too rich and insistent to ignore. 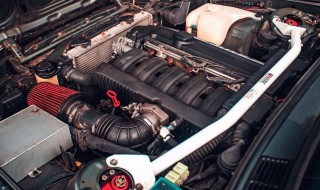 “I was initially looking for a project car when I came across this one: a well-known shop named JustE30z was selling this completely redone, engine-swapped example”

“The R32 was quick, comfortable and bagged, but after a month of ownership I realised it wasn’t for me,” he recalls. “The E30 is great because it has character and makes you feel a certain way, whereas I felt the VW was sterile and boring. So after six months of no E30, I started to look again… I was initially looking for a project car when I came across this one: a wellknown shop named JustE30z was selling this completely redone, engine-swapped example. So I messaged them, and after some lengthy discussion and a deal that would make Mike Brewer proud, I drove the car home.”

The engine swap in question is beautifully executed, and a very smart choice. What you’re looking at here is a 2.8-litre M52, the straight-six whose family debuted in 1994 for use in the E36 3 Series.

The M52B28 was offered in several BMs and remains a very popular choice when it comes to engines swaps for older BMWs, and here it’s been fitted with a freerflowing M50 intake manifold, a simple mod that can make up to an additional 20hp. 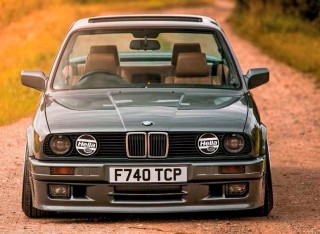 That’s before you take into the account the fact that this M52 has also been remapped, so with power now well over the 200hp-mark it’s no surprise to see that JustE30z deemed it necessary to swap in an LSD and the 3.73 ratio ensures this E30 feels exceptionally lively. It’s interesting to note that the engine’s been swapped in along with its native automatic gearbox – many owners would probably consider the transplant to be an opportunity for a manual conversion along the way but evidently, JustE30z didn’t think this way. “My plan from the off was to replace the gearbox with a manual pretty much as soon as possible,” says Adam. “Although two years later it’s still in there, mainly because my wife only drives auto and she fell in love with the E30 as soon as she drove it! I love the fact that while she has no connection to old cars or BMWs, as soon as she drove the car she understood why I love them – so the auto stays! For now…” he adds with a chuckle.

Starting life as a 325i SE, the conversion by JustE30z has been comprehensive, although never to the extent that it looks overtly un-factory. The exterior upgrades are limited to an M Tech II kit, which enhances the car’s appearance while keeping the styling subtle and OE, and those retro and oh-so-cool Hella light covers. A natural element of the engine conversion process was to make up a custom stainless steel exhaust system, but you’ll note that the tails appear pleasingly original-style in design and diameter. The M52 swap provides a perfect balance for the car’s character, so Adam tells us, with the power hike being perfectly matched to the sprinkling of well-thought-out chassis upgrades. The E30 now wears GAZ Gold coilovers, along with an Ultra Racing strut brace and adjustable anti-roll bars, Powerflex bushes throughout and a quicker E36 M3 steering rack.

“The E30 is already great in stock form, but with the extra power it needs to be a little lower and stiffer,” says Adam, and you can’t fault the logic. “It’s had a lot of different wheels throughout my ownership too! I’m not a wheel snob, it’s had stock rims, genuine and replica aftermarket ones, three-piece splits; it’s currently running the 17” Lenso BSX wheels simply because I think they look great and really suit the car’s style. I sold my three-piece Image split-rims to fund the next set, which will be a set of Gottis if I can find all the parts for them. Obviously, the BBS RS will always look good on an E30, and my dream wheel would be the BBS E50, but prices are through the roof and I would rather put money into suspension components first.” You can see he’s put a lot of thought into this, and the next chapter will see him investing some serious money into the way the car rides; the GAZ Golds are excellent for day-to-day use, but Adam’s keen to level-up next year and fit a full air-ride setup. “It’s just more practical for British roads,” he shrugs, although we suspect that the awesome looks of an aired-out E30 combined with the perennial amusement of altering ride-height at the touch of a button may also be a factor here.

“I’m currently halfway through a complete interior overhaul too,” he continues. “The stock tan leather is something you either love or hate. To be honest, I did toy with the idea of dyeing it black, although I do feel that the tan is very much in keeping with the era, so I’ll be sticking with a shade very close to the original.” And that’s just one of numerous plans – along with a jaunt to Wörthersee in 2020, Adam will be stirring a custom exhaust into the mix, and no doubt getting up to all manner of other mischief. He’s simply following Madonna’s advice, really; having heard her siren song way back in the eighties, Adam just has this ingrained compulsion to express himself. 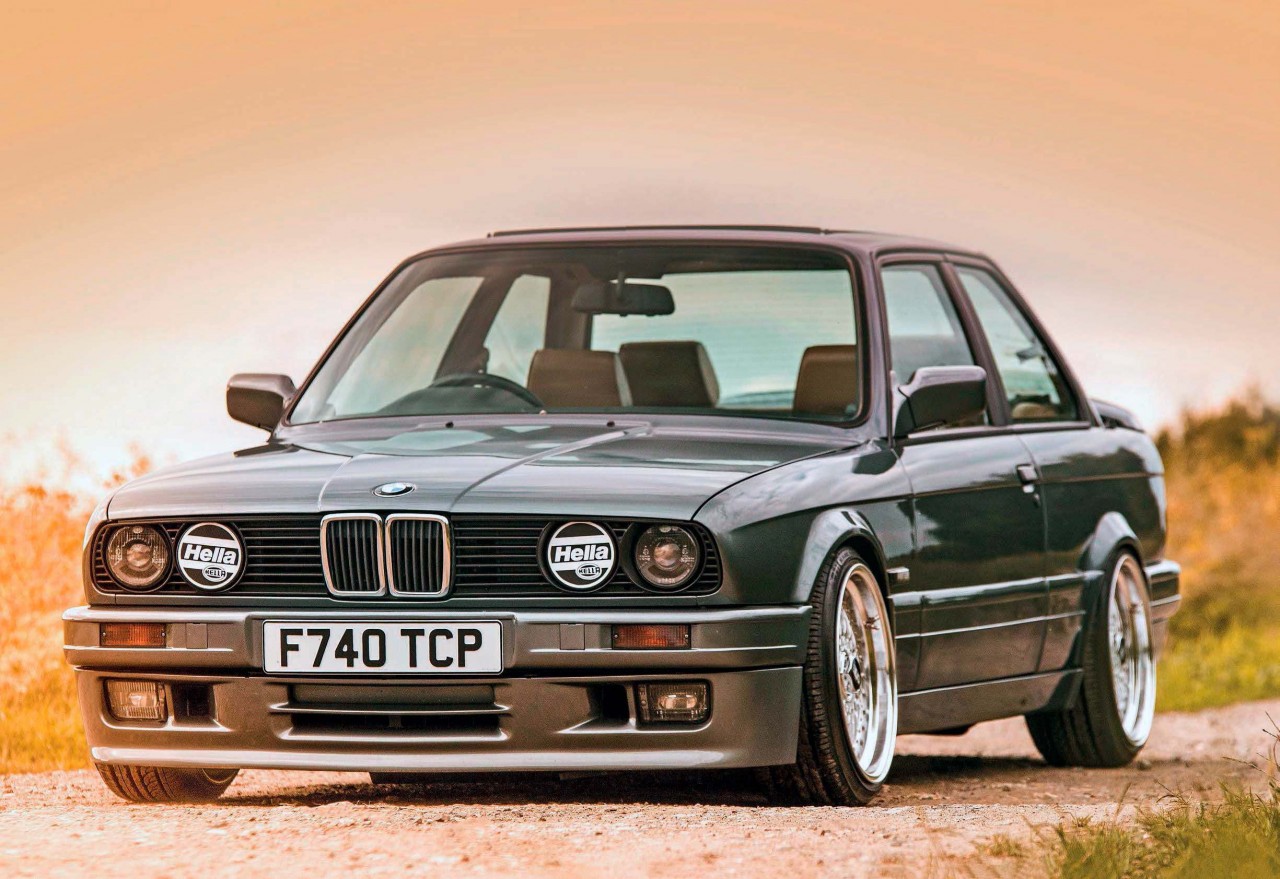 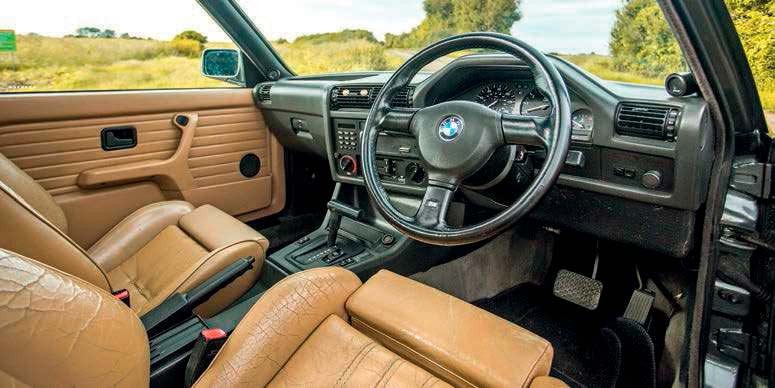 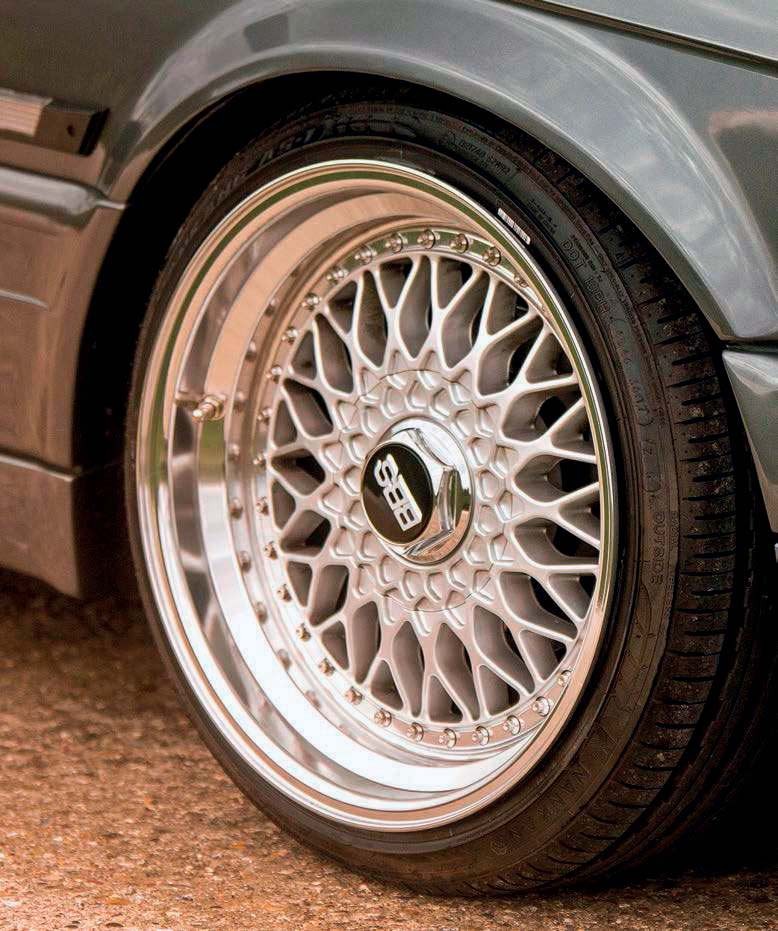 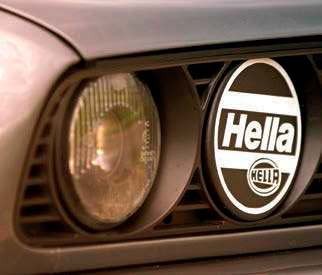 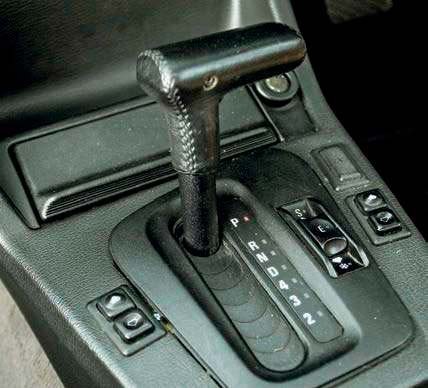 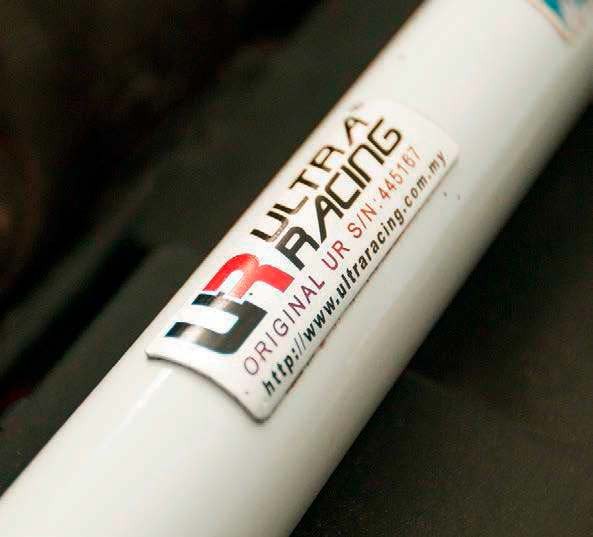 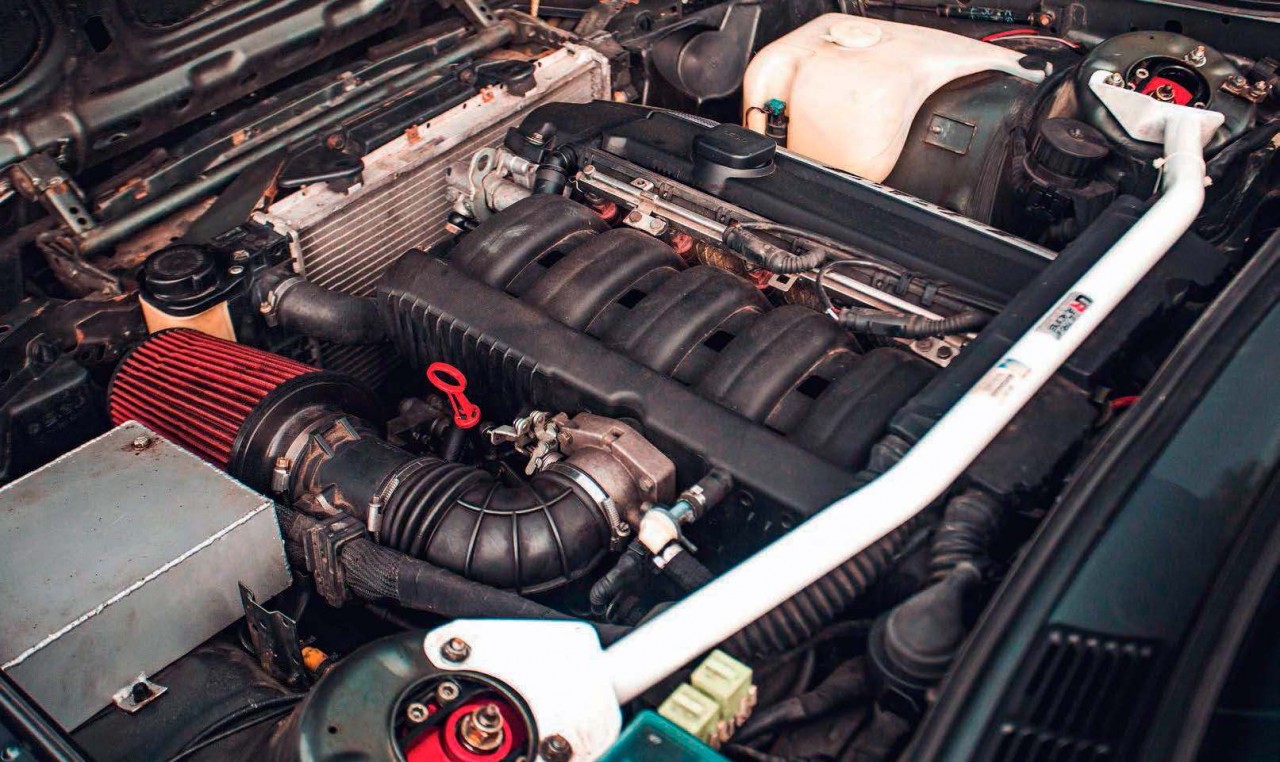 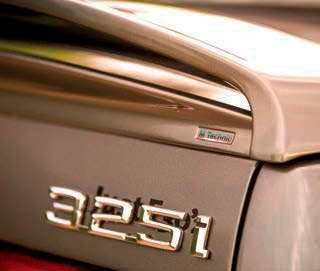 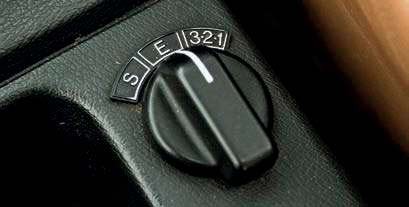 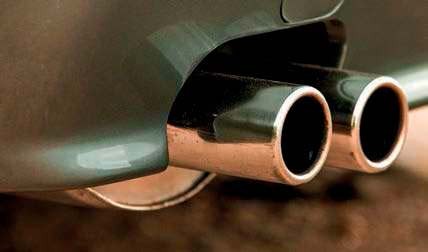 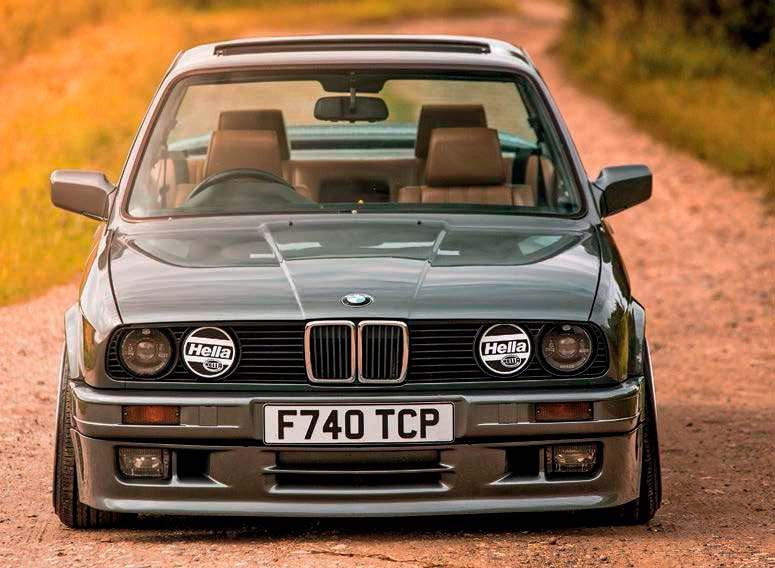 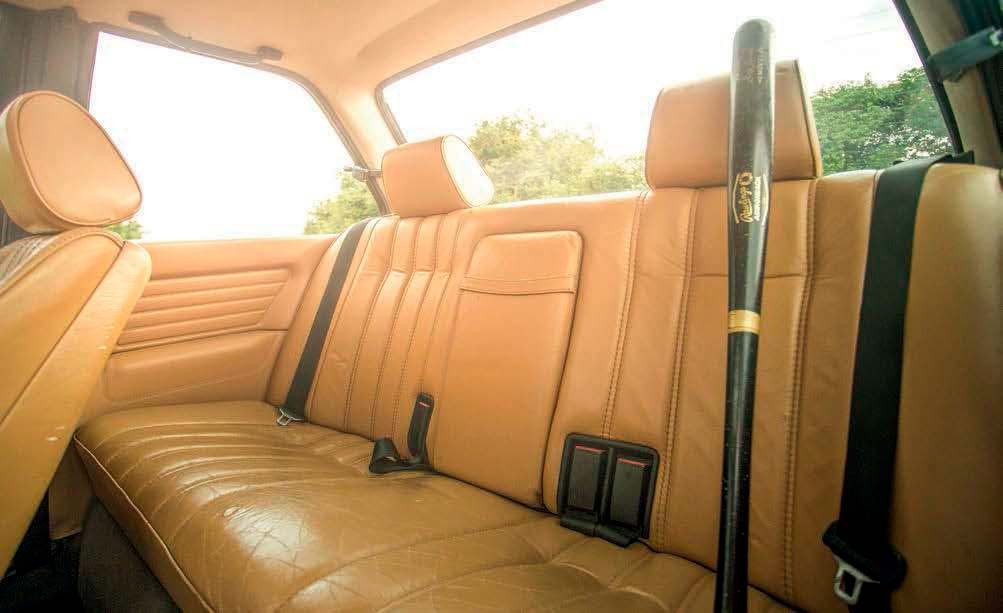 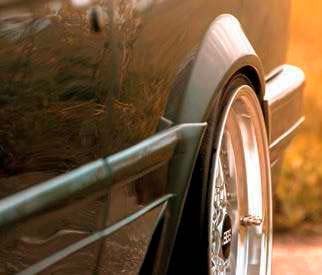 THANKS Thanks to JustE30z, Adam at ASR Photography, my wife Kerry for making sure I have time to do what I love, my kids Grace and Sam for always reminding daddy ‘righty-tighty, lefty-loosey’, and my good friend Pete and his dad Bernie who have both turned wrenches on all my cars