Our love for the F80 M3 is well-documented and, to our eyes, the four-door M machine is arguably the better-looking of the F8x M power duo thanks to its narrower body and wider arches, which combine to give it a properly pumped-up look. Throw in that exceptionally powerful and easily-tuned S55 and a chassis set-up for pure driver involvement and satisfaction, and its appeal is undeniable. It’s easy to understand why it’s been so well-received by M enthusiasts the world over and why the flood of perfectly-modded examples isn’t about to stop anytime soon, and we couldn’t be happier about that. Just look at Lukasz Nowacki’s F80 M3, for example – with its stunning Individual Atlantis blue paint accompanied by a host of perfectly-selected mods, it’s one seriously lust-worthy machine.

“The perfect accompaniment for the perfect wheels is the perfect drop and that has been delivered via a set of KW V3 coilovers, which get this M3 seriously low” 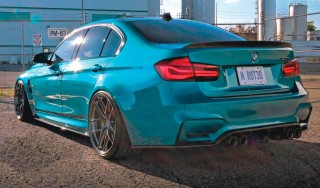 For Lukasz, BMWs are cars that he’s long admired and he breaks down their appeal into three core elements: “The driving dynamics, clean and simple ergonomics and the fan base scene,” he says and there’s no arguing there. “The first BMW I bought was a Z4 M Coupé,” he continues, “the design was stunning, nothing else compared. A high-revving NA S54 with a seat fitted right over the rear wheels gave a very special driving experience,” he grins and as well as enjoying the Z4 he also got stuck into modding with it, dropping it on H&R coilovers, adding aero, HRE wheels, a StopTech BBK, CSL intake and RPI exhaust. Clearly now bitten by both the BM and modding bugs, Lukasz proceeded to buy and mod an E90 328i Sport, E70 X5 and currently owns an F15 X5 alongside the M3, so him buying and modding another BM was inevitable and his choice is impeccable.

“I decided to buy an F80 M3 because of the hips,” he says, “I’ve always had a soft spot for proper body lines and aggressive looks. I also wanted a six-speed sport sedan and nothing else competes with the M3. Lastly I wanted Individual custom paint,” and the easiest way to get exactly what he wanted was to order himself a brand spanking new M3 in his dream spec – manual gearbox, carbon ceramic brakes, Individual paint, full carbon package and titanium exhaust, and there’s a lot to love right there. Of course, it goes without saying that Lukasz had plenty of mods in mind when ordering the car and he wasted no time in getting stuck into his new project.

“Aesthetics are all well and good but you don’t buy an M3, especially not one with an S55 under the bonnet, in order to just make it look good and Lukasz certainly hasn’t forgotten about performance with this build”

The first item on his mods list was wheels; he got those on the car on the second day of ownership and he’d already had them waiting in the wings for the arrival of the M3, and there was only one option for him: “HRE is known for quality bespoke wheels. Their design is elegant and functional, which made them the number one choice for my build. I decided to go with their lightest monoblock R101 Lightweight in custom-engineered sizes to further make them even more special, in a hand-brushed dark clear powder coated translucent finish,” he says and we share his feelings about HRE. The California-based company makes some stunning wheels and the R101 Lightweight is a superb choice for the F80 M3 – it’s a simple design but there’s a lot more to the styling than meets the eye and it looks fantastic on the car. The custom widths and offsets ensure that the fitment is absolutely on-point and the finish is just stunning and contrasts beautifully against that dazzling bodywork. The perfect accompaniment for the perfect wheels is the perfect drop and that has been delivered via a set of KW V3 coilovers, which get this M3 seriously low and delete the arch gap with ruthless efficiency, and they’re joined by Fall Line bushes to sharpen up the handling. 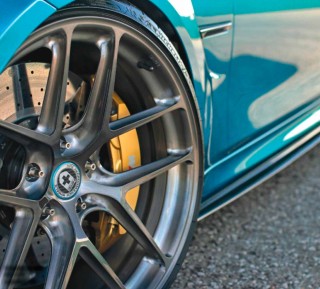 Sticking with aesthetics, Lukasz now set his sights on some additional exterior and interior elements to make his M3 stand out and give it a more personal and individual look. First of all, we’ve got to address the BMW carbon elements, because they play a big part in ensuring that this M3 looks seriously mean – up front there’s a combo of carbon lip and splitters and then you’ve got those carbon mirror caps, and Lukasz has just built on that. He’s added a pair of Sterckenn carbon fangs up front for an even more aggressive look, RKP carbon side blades along the flanks, a 3D Design rear spoiler and an ultra-aggressive Agency Power rear diffuser with some serious fin action going on. But special mention has to go to the genuine M4 GTS carbon bonnet, Lukasz’s favourite mod on the whole car: “I had it colour-matched and left the underside exposed raw carbon.

With the Individual paintwork, it takes the front end to another level and creates an even more aggressive and menacing look,” he says with a grin and it’s without doubt the styling centrepiece on this M3 and really amps things up in the looks department. The exterior styling isn’t just about carbon, though, and Lukasz has paid plenty of attention to the details to really bring everything together, adding an LCI LED Euro M3 CS headlight conversion, M3 CS rear lights, and gloss black grilles and badges and it all combines to make this one seriously sexy-looking machine.

For the interior, Lukasz has continued with the carbon theme from the outside and has also added some flashes of Atlantis to bring everything together. There’s a custom carbon and Alcantara steering wheel with an Atlantis centre stripe, custom Gaphix Atlantis seat belts, Alcantara and carbon gear knob and handbrake – both with M tricolour-stitched gaiters – and there’s just acres and acres of carbon trim everywhere you look, which includes the door pulls, door pockets and even the seat backs. All that carbon is a feast for the eyes and the addition of those subtle Atlantis highlights is inspired and just adds enough of a flash of colour. 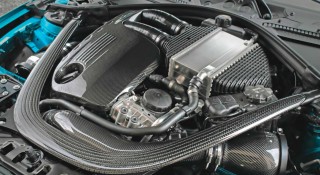 Of course, aesthetics are all well and good but you don’t buy an M3, especially not one with an S55 under the bonnet, in order to just make it look good and Lukasz certainly hasn’t forgotten about performance with this build. Lifting the carbon bonnet, the first thing you notice is that there’s more carbon in the engine bay than you’d normally expect to see and that’s partly because of the carbon engine cover and also because of the two Eventuri carbon intakes that have been installed. These are joined by a pair of ESS charge pipes to handle the increase in boost brought about by the Pro Tuning Freaks BM3 flash, with differing boost pressure set-up for each gear, and to make the most of that Lukasz has also added a Fabspeed cat-less mid-pipe and the whole lot is finished off with that M Performance titanium exhaust, complete with carbon tips, naturally. The combination of all those mods has pushed this M3’s power to well over 500hp, bringing with it a serious increase in performance, ensuring it has more than enough bite to match all that bark. 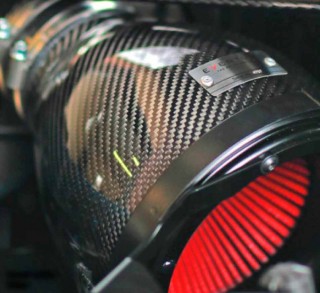 Over two years, Lukasz has built himself an incredibly nice F80 M3 and this is a build that really has it all, from the Individual paint and acres of carbon, to that perfect stance, lush HREs and a whole heap of performance upgrades under the bonnet as well. You really can’t fault this build and it delivers in every area. Over that time, Lukasz has been tweaking his mods as he went along, with the car evolving along the way and it’s not reached its final form just yet. “I’m planning to fit a set of custom Recaro seats, 3D Design front and rear bumpers, Pure Turbos upgraded turbochargers and possibly a cage,” he says, which will take this already exceptional M3 to another level and he’s got plenty of time to keep modding as there are no plans to sell. “It’s too soon to tell what my next car might be – that usually becomes known when I’m done with a project, and I’m not quite done yet,” he laughs and we wager this M3 is going to keep on giving him that modding buzz – and the driving thrills that come with it – for quite some time to come.