There are two kinds of people in the car modifying world – those that build a project to an extent, move it on, and start with another, and those that start a project with the intention of never letting it go. Having owned this 635CSi Motorsport since the age of 18, George Assi definitely falls in to the latter category. 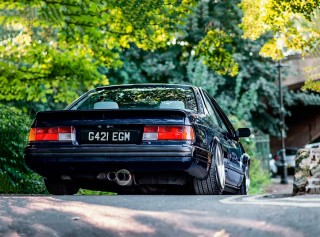 “I’ve owned this car for 17 years,” George told us. “My father bought it for me as an 18th birthday present as at that time my ‘1987 E30 was giving up on me – unbelievably the E30’s engine seized the day 1 went to pick up the 6 Series!” Since then, he’s never looked back. “I fell in love with this car the moment I saw it. The most striking thing was the colour and the contrast between that and the Lotus white leather interior as it was so unusual. I feel I’ve always had a soft spot for this particular car.”

Despite the high value of the car and the fact that it’s a rare, last of the line Motorsport edition, George hasn’t been afraid to modify it since day one and the project’s slowly evolved over the years. It all began with a drop on Bilstein suspension over classic deep-dish MK Motorsport wheels, which stayed on the car for an incredible 13 years. “The car was parked up for about six years as I got into the Jap scene,” admitted George. “I imported myself an Integra DC5 so I took the Six off the road. A wife and two kids later and the ‘Teg had to go, so my attention went back to the BMW. I just wanted to do something different with it.” 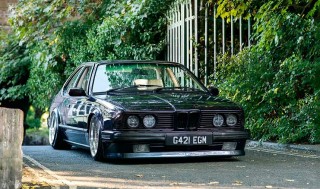 George’s ideas included getting the E24 as low to the ground as humanly possible, for which there was only one thing: air. Airbags have become extremely popular on the VW scene and to an extent on the BMW scene, too, over the past couple of years. However, George was one of those that was there setting the trend, not simply following it. The result is that since 2010 this E24 has run with airbags instead of springs. There’s been a few revisions to his setup over the years, especially as the technology behind digital management has moved on leaps and bounds. When George originally went with air it was all controlled manually but now he has Airlift v2 management and struts, along with a very swish boot install of the remaining components, which we’ll come to later. 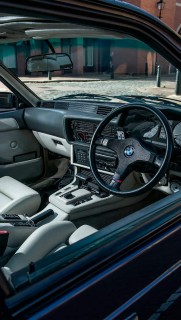 While George will probably openly admit that this car is more about show than go, that doesn’t mean he’s ignored what’s going on under the bonnet. The big M30 was rebuilt seven years ago and has gained a ported, polished and gas-flowed head, an Alpina B10 cam, big-bore throttle body, a K&N panel filter and a performance chip. The guys over at Style Dynamics in Hayes weaved their TIG-welding magic to build George a full stainless steel exhaust system and the result is an engine that feels as fresh today as it did when George first got the E24, only with a much fruitier soundtrack. The gearbox is the standard four-speed auto, though it’s been replaced with a low-mileage unit during George’s ownership.

As you can see the bodywork is in astonishing condition thanks to some hard graft down at the bodyshop. I laving been parked up while George had his DC5, a little tin worm was to be expected, but it was just the jacking points that needed any attention from a welder. 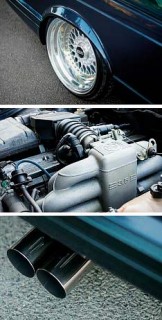 Some seven years ago the rest was rubbed back and repainted in fresh Macau blue paint – astonishingly the panels are all original and that just adds to the coolness of this classic. While George was there he had the front and rear roundels smoothed off and the side repeaters, the headlight washers and wipers deleted. Other than this the exterior touches are fairly minimal – too much would ruin the classic lines.

To add to the moodiness of that unique Macau blue paintwork, George has added smoked indicators along with genuine Hella smoked E30 M3 headlights (which are a smaller diameter and were custom mounted). The finishing touch to the exterior is without a doubt those gorgeous BBS RSs – a period wheel that George has reworked to suit the modem stanced approach to his classic.

“I had the wheels sitting in my garden for years,” explained George. “Last year, I decided to do something with them.” His plan included getting custom lips and barrels made in Germany, bringing the measurements out to 10.5×17” at the front and 11.5×17” at the rear. This was done using 6.5” barrels all-round along with 2.5” front lips and ultra-deep 4.5” rears, with every component of the wheels fully polished. They’ve then been shod in 215/40 and 235/40 tyres front and rear respectively and with them fitted to the car, there are few things better to look at on this planet.

Don’t get us wrong, George’s old MK Motorsport wheels were achingly period perfect but the new RSs just take the car to a whole new level – nothing screams gangster like this moody dumped E24 rolling around on the polished, dishy BBS rolling gear. Parked up, laying frame it doesn’t look so bad either.

George isn’t a member of any forums or Facebook, so he didn’t know that the world had gone crazy for his E24. The world’s stance forums adored it and every show write-up that featured his car saw countless comments of sheer admiration. Photos of this Six have been seen across the globe and met with only the highest approval. It’s also incredible how it’s not just modified car fans that love this 635CSi – passers-by on our photoshoot, young and old alike, stopped and stared. Some even came back for a second look! It’s not often you see a car that appeals to the masses quite like this but the combination of a classic BMW with a mixture of period and modem touches clearly ticks the boxes for many members of the public. 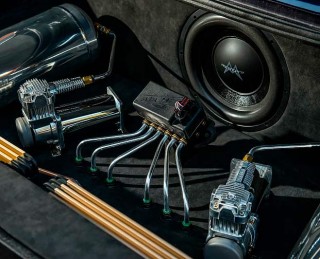 The finishing touch is undoubtedly the aforementioned boot build. Shiv at Design4 Automotive was charged with installing the latest air setup with the help of HTS Motorsport – the management and the audio, too. The latter includes a monstrous 12” Ascendant sub, powered by an SPL 3500w amp. There’s also an SPL four-channel amp to run the in-car Focal components and Kenwood tweeters. The two amps can be found neatly installed right at the back of the car with the sub up against the rear seats and proudly displayed in the boot.

Another aspect of the build that we love are the air components displayed as part of the boot display. Tw o VIAIR compressors feed a Design4 Automotive tank, all of which has been installed with the utmost precision. The use of polished hardlines and Alcantara, as well as subtle strip lighting, simply give it a stunning finish.

With the boot propped up by George’s new polished baseball bat, there’s no way anyone could miss this thing at a show.

You might expect that with such a complete package, George could be feeling like this journey with the E24 is just about over – but you couldn’t be more wrong. He’d been wondering about swapping in an E39 M5 engine but with something so original, the car would really lose something. So, current ideas include supercharging the M30, with the ultimate plan to do the same as his father did for him — this car will one day belong to George’s son, Ricco. If that’s not a demonstration of the long-term bond and love George has for this project, we really don’t know what is.

Although there are plenty of cool details around this E24, nothing can overshadow those epic BBSs!

Left: boot install is a real highlight of the build, especially with the polished hardlines and Alcantara trim.