TAUNUS TC TWO-DOOR  Like a Mk3 Cortina, only it’s not….

The idea of building a ‘world car’ — that is, one that will sell and function adequately in near-enough all global markets — is a tricky one. Ford attempted to tackle this head-on in the early-’90s with the Mondeo; the clue was right there in the name, ‘Monde’ meaning ‘world’ (although it’s fair to say that the US market only paid lip service to the idea — their ‘Contour’ version shared little with ours beyond the door handles and some windows). The Mondeo is generally credited as being Ford’s second crack at a world car, with the first being the Mk3 Escort of 1980… but perhaps posterity is missing a trick here. You see, the TC-generation Taunus tried to throw its chips on the global-domination Risk board way back in 1970. 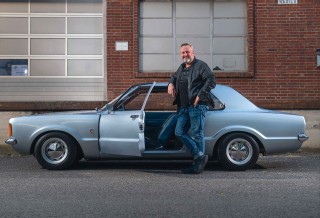 Developed under the watchful eye of former General Motors kingpin turned Ford Motor Company (US) president, Semon Knudsen, it was engineered alongside its technical sibling, the Mk3 Cortina, to work on both sides of the Atlantic as a practical, desirable and affordable mid-size. Enthusiasts call the German-market cars ‘Knudsen Taunus’, for obvious reasons.

The fun part for UK Ford fans is to revel in the double-take: there’s a lot of crossover across the board with the Fords of Britain and those of Germany, evidenced by the fuel-injected V6s found in 2.8i Capris and the Cologne-built Granadas that cruised Britain’s boulevards throughout the ’70s and ’80s — but for the seasoned British fan, a trip to a car meet in Western Europe can be a bit of an eye-opener, seeing Fords that were never commercially available in the UK. The design language is familiar, the drivetrains and switchgear all ring a bell, and yet… their classic Ford scene seems somehow like looking at our own in a cracked and distorted mirror. And central to this befuddlement is the Taunus TC. The crux of it is that, as you can see, the familiar body is actually really quite different in certain key areas. Furthermore, it was available as a rakish coupé, which our own Mk3 Cortina was not; Ford of Britain considered that niche to be adequately filled by the Capri, but our Teutonic cousins felt that a bigger, perhaps more upmarket coupé could sit in the model range, too. So they scythed the back off the Taunus and turned it into a fastback. But the confusion continues when you look at the two-door saloon — picture a two-door Cortina, then overlay that image across the Taunus you see here. Same, but different. Bit of a mind-bender, isn’t it? 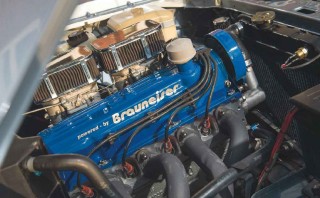 All of this is grist to Timo Jungmichel’s mill, the owner of this silver TC having been an obsessive fan of both Cortinas and Taunuses from day one. “I’ve been nuts about them since I got my driving licence,” he grins. “Well, my first car was a Renault 4, but I think my friends have forgiven me that! I replaced it with a Mk4 Cortina, which I lowered and fitted with a 2.8i V6. And after I rolled that on a motorway exit, I bought my first Knudsen Taunus…”

The accident turned out to be a blessing in disguise, particularly if the TC model is your own preferred tipple, as the situation flourished and bloomed into a long-standing relationship for Timo. That first TC was a Daytona Yellow example, which he lowered and fitted with a set of timeless 7×13 inch RS four-spokes. A strong look for such a crisply-styled saloon, and it clearly marked him out as a connoisseur, as while he was out and about driving it in 1993 somebody offered him the chance to buy another Knudsen Taunus. A 1975 1300L, to be exact, which just so happened to be a one-owner car, it’s elderly custodian feeling that she should pass it on to another caring owner. And that car is the very one you see here — although, inevitably, things have changed just a little bit over the last quarter-century. 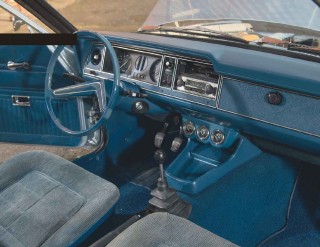 “I started to use this Taunus as my winter car, to save the yellow one from the harshness of the weather,” Timo recalls. But he found himself growing more and more attached to the 1300; “Eventually I sold the yellow one and this became my main Ford,” he laughs.

Before long, the vagaries of age started to set in until, in order to pass the TÜV (Germany’s equivalent of an MoT), it was necessary to address some of the tinworm. Timo fitted a new set of front wings and replaced the rear arches to get it all legit, and the act of rolling up his sleeves and getting stuck into the metalwork inspired him to make a few upgrades, too. “I fitted a black interior with Recaro seats,” he says, “and I also replaced the engine with a 2-litre Pinto, along with the five-speed gearbox from a Sierra.”

A new lease of life then, although this turned out to be just the beginning. Timo’s not exactly one to rush into things, but when he gets an idea into his head he likes to see it through properly. Having smoked about in the TC for another 10 years (and really, what’s a decade between friends?), he decided to take it off the road, strip it back to bare metal, and build it up from first principles as the dream TC he’d always hankered for. The stripped shell was perfected with every trace element of rot chased away before being reshot in the tasteful shade of metallic silver you see here. Once it was ready for refitting, Timo found himself a full, stock interior and had it trimmed in blue, which is an ineffably cool finish perfectly complemented by the glorious blue dash and steering wheel. 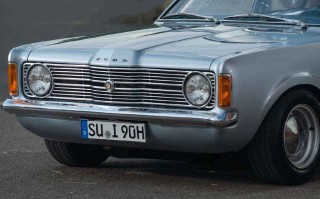 Looks like a magnificent venue for boulevard cruising, doesn’t it?

Don’t go thinking that this is some sedate boulevardier though; look inside that pristine engine bay and you’ll find that the 2-litre has enjoyed a few alterations… the expert fingertips of Gerd Brauneiser have rebuilt it as a fast-road screamer, boasting a sportier cam, a Stage 2 head, and twin 44 IDF carbs, all snarling through a custom stainless exhaust and surprising people who are fooled by the Taunus’s relatively sober appearance. Indeed, this is the car’s trump card: aside from the banded steels and subtly hunkered-down stance, there’s little to give away its dark heart. Most people assume it’s simply a well-looked-after classic. But Timo’s been around this block a few times. This isn’t just a resto — it’s the culmination of decades of passion.

And how did the Mk3 Cortina/Taunus TC work as a world car? Well, despite Knudsen’s early intentions it never actually broke America… although the platform was available in Canada, and the domestic markets of South Africa, Australia and even Japan all had their own unique and subtly different versions. But wherever you look, you’d be hard pushed to find another quite as cool as Timo’s — it’s a less-is-more showcase of passion and craftsmanship. A perfect example of a Cortina, that isn’t actually a Cortina at all. 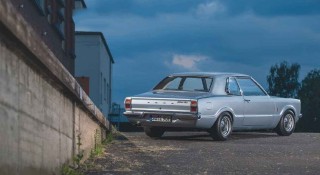 “ASIDE FROM THE BANDED STEELS AND HUNKEREDDOWN STANCE, THERE’S LITTLE TO GIVE AWAY ITS DARK HEART”

Thanks To Gerd Brauneiser for building the engine, VGS/Victor Günther for setting up the engine, Gerd Bars for the body, Dirk Beyer for painting, Manfred Watch for carburettor technology(!), Koni (www.koni.com) and Vredestein (www.vredestein.co.uk) 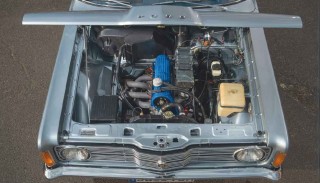 TC AND MK3: THE DIFFERENCES

The Taunus TC shares its platform with the Mk3 Cortina, but the most obvious feature of the UK model is missing from its German sibling — that now-iconic Coke bottle styling. Instead, the TC has its own door skins and rear quarters which give it a more sober and squared-off look, and as a consequence the taillights and bootlid are entirely different, too. Engine choices were appropriately market-specific too — while a choice of Pinto sizes were available for both, the Taunus never had the Crossflow, using a 1300 version of the Pinto for the smaller capacity models instead. And it’s possible to tell the difference from the front — the Cortina’s indicators are smaller, and the Taunus has a more pronounced yet slimmer bulge in the bonnet’s nose, which makes the grille a different shape. 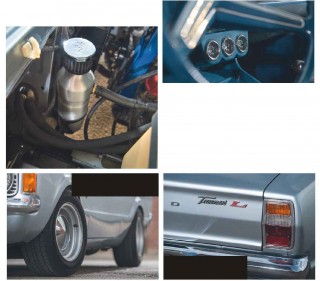 The interior looks pleasingly standard, but Timo’s used a mix of factory blue trim and recovered seats to get this distinctively ’70s look.

The TCs front end looks very Mk3 Cortina, but compare them side by side and they’re actually quite different.

“AFTER I ROLLED MY MK4 CORTINA ON A MOTORWAY EXIT, I BOUGHT MY FIRST KNUDSEN TAUNUS AND THE REST IS HISTORY…”

The engine bay bristles with some neat touches like this spun alloy catch tank. 7×13 inch steel with caps are the perfect look for Timo’s TC. TC’s rear end styling is very different to the Mk3 Cortina. Originally powered by a 1300 Pinto, there’s now a worked 2-litre in the bay. Timo’s neatly colour-coded the aftermarket gauge pod to make it look part of the original interior.