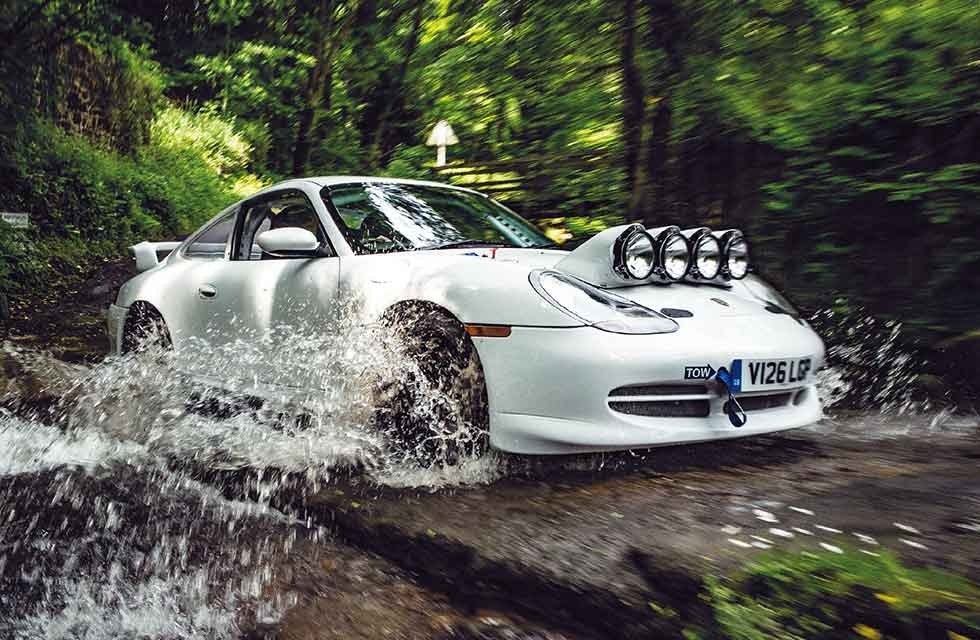 Just like most people reading this magazine I like Porsches in pretty much whatever guise in which they appear. Growing up in the early 1980s, my November weekends were spent in Welsh forests following the RAC Rally. For me there is something special about seeing a Porsche slithering around on gravel, getting airborne and power sliding around tight corners. That’s why when I came across some shots of Keith Anglesea’s recently completed tarmac rally-spec 996 it cried-out to me for further investigation.

Firing the engine up to pull it off the trailer in a quiet country park, the sound actually sent a shiver of excitement down my spine. As it bumped down off the ramps with its rock hard suspension, with the lattice of a fully welded MSA specification roll cage visible through the back window, it was evident that it’s not just a 996 with a cool-looking lightpod on front, this is a very serious rally car.

In 1984 a young Keith was standing somewhere not too far from me watching the same rally cars power through the trees on that year’s RAC Rally. However, it wasn’t Ari Vatanen’s new Peugeot 205 T16 that impressed him the most, but Roger Clark in a Prodrive prepared Rothmans liveried 911 SCRS that caught his imagination. With cold feet and his steaming breath hanging in the air, Keith decided that one day he would himself rally a Porsche.

Even though Keith had many, many years of experience being involved with motorsport, with a career that included working for championship winning teams while still a teenager, and a 10-year stint as engineering manager of the Oulton Park Rally School, his dream was a long time coming true. When Keith could afford the cost, and find the time to prepare and run his first competition car, he used his skills to build a Ford Escort Cosworth (from scratch) before moving on to a BMW 3 Series which he drove for many years, always sticking to a tight budget as he had a young family to support. With a recent family bereavement came an inheritance that somewhat expanded Keith’s options. With enough passed on to his sons for them to put down deposits on houses, Keith felt that with the remainder, the time had come to finally fulfil his childhood dream.

It didn’t take too long before Keith came across an advert for a half-finished circuit racing project, a 2000 3.4-litre 996 C2 with 115,000 miles on its clocks. It already had a fully welded FIA-spec Custom Cages rollcage installed, and another huge plus was its major Hartech engine upgrade, with the work done coming in at £12,000. Forged pistons, special cams and lightened and balanced heads give only a 15hp power increase from the base 315hp, but makes the engine much stronger, higher revving and more responsive.

“It was the right car at the right time and at the right price,” Keith said, although at first he wasn’t too sure that turning a 996 into a rally car was the best idea. “There was no one else in the UK that had built one before, so there was no information or resources to read up on. I knew that there’d be a lot I’d be doing from a blank sheet. But I suppose when you do something completely new like that it’s normal to feel a bit daunted at first.”

A couple of things helped persuade Keith that rallying was the way to go. First was that he didn’t really enjoy the last few circuit races he’d run in the BMW, so he converted it into a tarmac rally car and, in just his third event, he won his class. This served as a demonstration that he was a good enough driver to handle the Porsche at competition speeds. The other was when he came across a lightpod on eBay. The mental image of it mounted to the 996 convinced him of which direction to take.

Apart from the engine, as Hartech have a deserved reputation for being second to none, Keith didn’t take it on faith that everything on the car was done correctly. “I’m an engineer and don’t trust anyone else’s work apart from my own, so the first thing I did was to take it all apart again.”

The strip down included all of the interior trim coming out, as well as all the surplus wiring and switches.

The rebuild included a self-made switch panel below the dashboard, the huge lever for the quick release handbrake, aluminium alloy sheets to cover the inside of the doors and Perspex windows. As rallying is much tougher on cars than circuit racing, the fuel and brake lines had to be fed inside the body and, to protect the cooling pipes underneath, Keith fabricated a three-quarter length (3mm thick) aluminium bash plate, and fitted a 10mm thick sump guard from a Mitsubishi Evo VIII. A set of Gaz Gold tarmac rally shocks and springs (designed for both circuit racing and tarmac rallying) were installed, and the car currently sits on a set of Pirelli Wets, 225/625/18s on the front and 265/645/18s on the rear.

Despite the glorious sound echoing off the trees as Keith manoeuvred the car around for our photos, the exhaust system is standard, its gorgeous note is all from the Hartech work. “Rallying has a 90 decibel sound limit, so although I love the bark of a flat-six it’s as loud as it can go,” he shrugs. With no sound proofing at all it delivers a very nice noise from inside!

Other standard 996 items include the six-speed manual gearbox and clutch, as well as all the suspension geometry (not including the shocks and springs). The GT3 body kit was a replica found on eBay which really helps with the car’s special visual aspect.

The first fire-up was in early spring 2018 and the first test drive and diagnostics test showed no faults, the car was almost ready for its first serious outing. A few rally track days to test settings for the suspension are planned and then the last item on the MSA (Motor Sport Association) ‘to-do’ list is the fitting of the required mudguards.

“Because it’s a tarmac-spec car obviously you want it as low as possible, but the engine sump is only four-inches off the ground so I need to raise the body about two inches,” Keith says. That point is ably demonstrated with a horrible grinding sound as the front splitter grates on the ground as Keith drives through the (pictured) ford at speed during our photoshoot.

Kieth is not in a rush to get the 911 out on the stages. “My name is on this car and, therefore, so is my reputation as an engineer, only when I am completely confident that it is fully fettled am I going to take it to its first proper event.”

Oh, and it won’t be bright white when it is finally unleashed. As a nod to that boy watching Roger Clark in his SCRS, something similar to the iconic Rothmans livery is what Keith will aim to replicate. However, he has been told by the wrapping company that if he was to have an accident the lines of the Martini scheme would be much cheaper to repair than the full blue Rothmans one! The only Martini livery seen on a rallying Porsche was that of the 1979 Safari Rally cars, but it would surely look stunning on this 996 as it tackles some local tarmac rallies in Wales later this summer for a proper shakedown.

And, maybe this car will be seen a little further afield too. Keith’s co-driver Martin Pendlebury is saving up to ship the car over to Barbados for the Sol Rally. “It’s famous for being a fun party rally, and apparently they love unusual cars there,” Keith smiles.

And Keith’s personal ambition with the car? The first rallies he watched were the Manx Internationals on the Isle of Man in the early ‘80s. In 1984 he saw Juha Kankunnen in an SCRS and, 35 years later, he wants to take his 911 to the island for a blast over the moors.

With no sound proofing at all it delivers a very nice noise from inside!