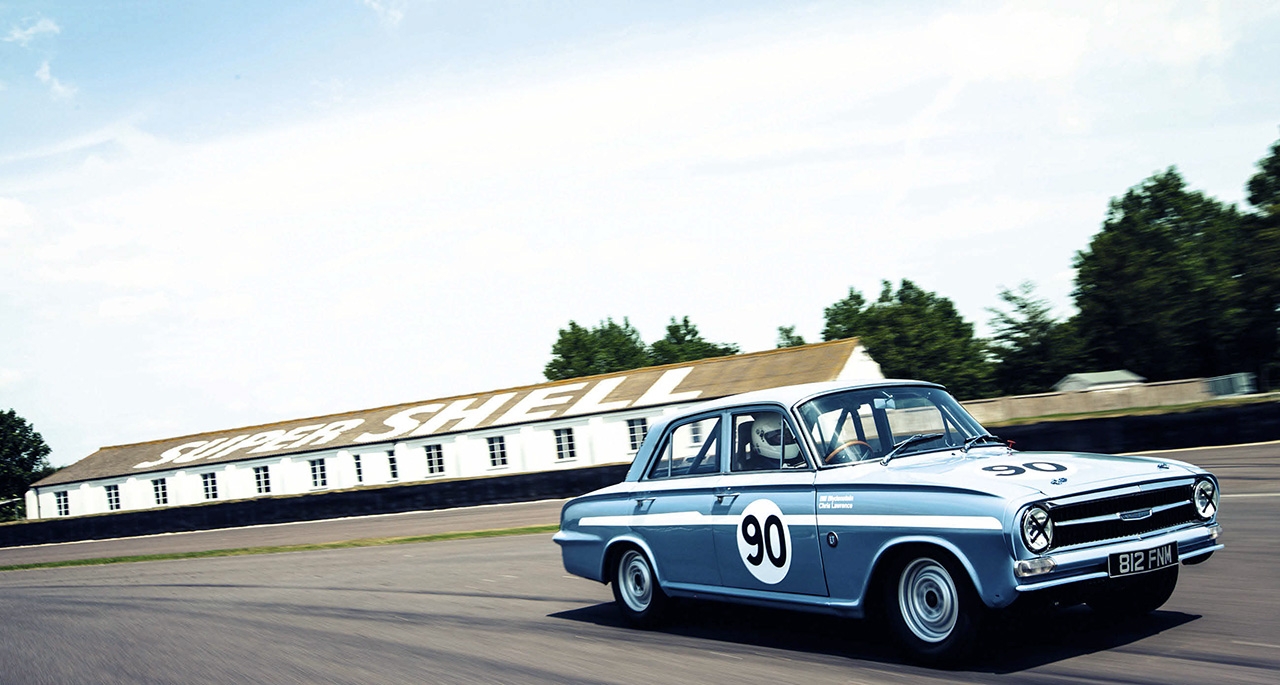 Many of us dream of getting on track at the Revival, but few manage it. Paul Clayson tells James Page how he found his golden ticket. Photography Malcolm Griffiths. 22bhp was coaxed out of the engine, the ride height was dropped by 3in and a stronger antiroll bar was fitted, plus adjustable dampers. After a disappointing first few races, the little equipe went to Spa, where the VX4/90 finished third, impressing Blydenstein with its stability through the Belgian circuit’s high-speed corners.

It then scored a runaway victory in the Whitsun National Dutch race at Zandvoort – hence the way in which Thurgood and Thomas both referred to it. The European Saloon Car Championship took the intrepid duo as far afield as Hungary and Austria, and they eventually finished third in class, but at the end of 1963 the Vauxhall went through something of a career change. It was sold to Rod Cooper, who had worked at Lawrence tune but was in the process of leaving to establish Super Sport with Jim Gavin and Terry Hobson. Cooper went on to enter dozens of rallies over the following few years, including the ’64 RAC. If you look carefully at the car’s roof, it is still possible to make out the mounting points for a spotlight.

Returning the Vauxhall to how it would have been during that 1963 circuit-racing season wasn’t always easy, due in most part to the various modifications that Lawrence and Blydenstein had made. “The cylinder head is a work of art,” says Clayson. “There are all sorts of tweaks in there. The valves aren’t Vauxhall, though. In the end, we had to have them made. We did wonder whether they might be Borgward, given Blydenstein’s history.”

The closer you look, the more details you discover. The carburettors, for example, are Weber 42DCOEs of the type that Morgan used at the time – Chris Lawrence had close links to the Malvern firm – while the inlet and exhaust manifolds are both bespoke Lawrencetune items. After problems getting the oil pressure up to the required level, the engine now produces in the region of 108bhp at 6250rpm. “I wanted to keep it as near to original spec as possible,” says Clayson. “It’s never going to win anything, and if you start stretching things to their limit it’s expensive and likely to be unreliable. Besides, another 8bhp isn’t going to make a huge difference.”

With the project progressing well, the Revival became an obvious goal: “I wondered if Vauxhall might like to get involved. I wrote a letter but after two weeks I hadn’t heard anything. Then, at the Classic Motor Show at the NEC, I wandered on to the Vauxhall Heritage stand – and that was where I met Simon Hucknall.”

Coincidentally, Clayson’s letter had recently made its way on to the desk of ever-enthusiastic PR manager Hucknall, and he immediately saw the attraction of getting behind the VX4/90 project. Vauxhall will be providing a two-man crew – in period attire, of course – plus a 1966 Bedford CA service van that is being sign written especially for the Revival. That was all decided only after the spot was confirmed – and that was no foregone conclusion. Goodwood is different to other race meetings. You don’t just request an entry form, write a cheque and post it all back. This is an invitation-only event.

“I sent an e-mail to Goodwood to tell them I had the car,” says Clayson, “and that it raced here in the St Mary’s Trophy in 1963. They are always looking for something different – that’ s what they like – but I still didn’t really know, even though I was invited to the press day to represent the saloons. They didn’t confirm it even then! It was only when I got home that night that I found an invitation from Lord March on the doormat.”

Our test takes the form of a shakedown – even Clayson himself hasn’t driven it before we head out for some slow laps behind the camera car. The modern harness and bucket seat hold you tight, but the sense is not of a stripped-out racer.

There’s a passenger seat for a start, and the rear bench is still in place. An extra panel houses the horn button and switches for wipers, fan, starter, fuel pumps and ignition. A standard instrument pod lies straight ahead, but the best interior feature is an aircraft clock of WW2 vintage that was added during the car’s original competition career – most likely when it was used in rallying.

Flick on the ignition, then the pumps, then press the starter. The 1546cc ‘four’ starts with no drama or excessive noise; Clayson is intending to fit a more boisterous exhaust in time for the Revival. The lack of race-car histrionics at low speed makes you feel instantly comfortable. It’s reassuringly easy to drive.

The Vauxhall is soft when cornering, but the engine is smooth and responsive. As you’d expect in a car with a straight-cut ’box, progress is accompanied by the traditional whine – until you’re into top, when it all goes quiet. The shift itself has a long throw but a positive action. Clayson mentions the body roll to Johnstone, who advises looking at the adjustable dampers.

He sets to work, going up 17 ‘clicks’ – it appears that they were on their full-soft setting. Some faster laps later in the afternoon prove that the handling is much improved. Goodwood is a deceptively awkward circuit, with three long double-apex right-handers, numerous kinks and crests, and tricky cambers. Although we can’t run at full speed due to noise restrictions, we can lap quickly enough to appreciate the Vauxhall’s composure throughout all of those hazards.

Back in the paddock, Clayson seems buoyed by this first outing, and you get the impression that he can’t wait for September. Come the big day, he and the Vauxhall might not be at the sharp end of the mightily competitive St Mary’s Trophy field, but you can rest assured that few people will be having as much fun.