The concept of nominative determinism is an interesting one, and a very real thing. It’s the idea that a person’s name defines what goes on to characterise their life; Barclays multimillionaire Rich Ricci, for example. Or glamour model Abi Titmuss, seasoned beverage enthusiast Amy Winehouse, and Arsenal manager Arsene Wenger. There’s an infamous scientific paper on incontinence written by J.W. Splatt and D. Weedon. Examples are endless. 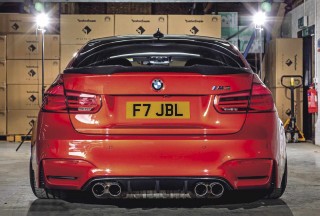 This is a concept that works both ways, of course. The startlingly vivid paint shade you see here, Sakhir orange, was named for the Sakhir desert in Bahrain. Why? Not because of the bold and imposing white colossus of the Al-Sakhir Palace, brimming as it is with French-inspired bastides, copious pillars and faux-medieval crenellations, but because in 2004 the Bahrain International Circuit opened down the road. You see, it’s the combination of motorsport effervescence and the implied aspirational value of moneyed Gulf states and their penchant for high-end cars that makes the logic flow. It follows that cars painted in Sakhir orange will naturally imply high net worth and high-octane thrills, right? OK, it’s not as on-the-nose as Ricci or Splatt, but the logic is undeniable, especially when you consider that Sakhir is an M-exclusive shade.

If you’ve got a business to promote, it stands to reason that an eye-catching paint hue will lure in the crowds at shows and events too. Not that this F80 M3 is a promotional vehicle per se, it’s the cherished ride of serial BMW modder Parm Panesar – but at the same time, he’s a central figure at the revered Car Audio Security, carrying the role of Air Lift and Rotiform Product Manager, so it doesn’t take Prof. Stephen Hawking to deduce what the direction of this build was always going to be. “I knew what I was doing with this car right from the start,” he grins. “The wheels and suspension were bought before the car was – I drove it straight from the BMW dealership to the workshop and got started straight away.”

This enthusiasm is wholly unsurprising, given Parm’s history with cars and modding. “I modify every car that I drive,” he assures us, something that will surely resonate with every single reader out there. “Driving a standard car seems so boring! Generally my cars get lowered, with new wheels and audio upgrades.” It’s a formula that works well for him, and this F80 clearly demonstrates that a handful of well-chosen mods on the right base car can be just as effective as an all-out show or race build.

The new-wave M3 is a natural progression for Parm; he may have started his motoring adventures in an XR3i-lookalike Mk3 Escort, but every subsequent page of his personal car diaries are scribbled with frantic BMW mischief. His first Beemer was an E36 M3 convertible, citing no more noble reason than that he was young and wanted to look cool (hey, you won’t hear any arguments from us), and since then he’s had an E36 M3, E46 M3, E92 M3… it’d be mad not to complete the chain with the latest version, wouldn’t it?

“I’ve always liked the M3 models,” Parm enthuses. “Like they say, it is the Ultimate Driving Machine. And the F80 is the best one so far!” He’s not kidding. With a twin-turbo straight-six offering the sort of thrust that’ll rush it to 62mph in a whisper over four seconds, going on to a top speed that has to be limited to stop the M3 punching through the very fabric of time itself, it’s packing near-supercar firepower in a luxurious and practical four-door package. There are a couple of reasons for choosing the M3 over the M4: the fact that you prefer the wide-arch styling, that you need the added practicality, or you’re keen to tap into the heritage of the fabled M3 name. In Parm’s case, completism was key – the M4 just wouldn’t have been proper, he’s an M3 guy through and through.

“I bought the car from Sytner BMW in Sheffield, and like I say the chassis mods were already waiting back at the workshop,” he continues. “The first job, above all else, was to secure the car with a top-of-the-range Clifford tracking and security system. Second on the list was the Air Lift air suspension. Last but not least, a set of Rotiform LAS-R forged wheels.

And a few months later, the boot install followed.” Makes it all sound so simple, doesn’t he? But that’s just the nature of the serious and seasoned modifier, there’s a clear plan of action and a simple(ish) job to be done. Naturally it helps that it’s a new car, as you don’t find yourself slowed down by seized and rusty bolts and a general reluctance to co-operate, but all of this relative convenience is of course counterpointed by the sizeable breath you have to take in waving goodbye to your warranty. Still, you only live once, right? 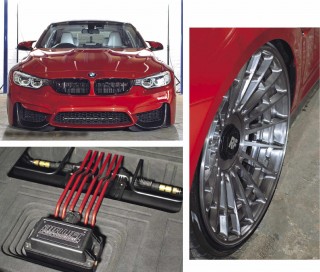 “The Air Lift Performance suspension was always a natural choice, with its self-levelling 3H management system,” reasons Parm. “For a superb ride quality, awesome handling and major convenience factors, there never seems to be any other suspension to go for!” he enthuses. When you’ve got the thing sitting on the floor, you’ve got to give some serious thought to filling those freshly altitude-reduced arches with the correct circles, and Parm’s played a bit of a blinder here. The LAS-R is one of the most alluring Rotiform designs of recent years, having a clear motorsport vibe, and what he’s cunningly done is to opt for two-piece forged splitrims which have the look of monoblocks.

Keeps people guessing, doesn’t it? And the dimensions are fairly meaty too – we’re looking at a massive 11×20” on the rear axle, with 9.5” of spread up front. Imposing stuff. “From the design to the colour, I love the wheels on this,” says Parm. “Being a Rotiform distributor, this is the only brand I would consider; I normally change my wheels every six months or so, but since I like these so much they’ve been on the car a lot longer!” Understandably so, they suit the crisp lines of the F80 perfectly – the sweet fusion of motorsport aggression and showground chic.

“I just love the whole look of the car, low and wide,” he enthuses, and given the way it sits so aggressively, you’d be forgiven for thinking that there have been some manner of exterior alterations. But no – that’s just the deadly-serious lines of BMW’s own M3 design, its creases and curves accentuated by that blisteringly bright and mile-deep glittery Sakhir orange. The only exterior embellishments are a pair of gloss black grilles and gloss black side wing vents, some carbon fibre splitters on the front and a CarbonSpeed diffuser at the rear, which is joined by a carbon boot spoiler, and the black and carbon combo works fantastically well against that bold Sakhir bodywork.

While the interior, with its Silverstone leather, has been left stock, the boot build really takes this M3 to the next level and it’s absolutely stunning. First of all there’s the triple tank setup, with three differently-sized tanks – all hydro-dipped in carbon fibre – mounted together and connected up with custom-painted Sakhir hardlines, while the twin compressors have been mounted beneath the boot floor and the whole lot is finished in grey Alcantara.

Meanwhile, to up his audio, Parm has added a custom-mounted Rockford Fosgate Punch P3 12” sub powered by a matching amp for a serious bit of bass. At the other end of the car, the S55 has been left alone and it’s not like it’s short on shove; “It doesn’t need to be any faster, otherwise I’d probably lose my licence,” laughs Parm.

What he’s crafted here is a beautifully accentuated example of a flawless production machine, artfully reworked to showcase the products that serve as both his passion and his livelihood. The spectre of Sakhir walks tall with this one: überpremium, ultra-sporty, rare and mysterious, with a distinctly tropical vibe. It’s more than just a name, Sakhir is a lifestyle.