Slick Toyota Celica We go Down Under to check out a build from one of our own snappers.

We all know that, there’s literally unlimited ways to put together a retro project. Original restorations, resto mods, full custom builds and all sorts. Some people concentrate simply on power and handling mods, others prefer the cosmetic, and some can’t help but go with all of the above. The one thing most builds have one thing in common though, is that they tend to cost a great deal of cash. Troy’s Barker’s Celica didn’t, but does that make it any less jaw-dropping? Or does that mean he’s any less proud of what he has achieved? Absolutely not. Now, Troy is actually one of our photographers. He also happens to be one of my top guys Down Under. The thing about being about a billion miles from RC Towers in the UK though (and this goes for plenty of our other contributors abroad too), is that we don’t always get to keep up with what’s going on with his own project.

It’s worth remembering that most of us on the RC team are here because we’re car nuts first and foremost. And that’s certainly reflected in the wider RC family too. You’ll notice that, on any modifi ed car magazine, many staffers simply got into the business for their love of messing about with their own cars. Troy had the exact same dream, even if he has taken it a tad further than most of us have the skills to, with his epic little 1970s Celica.

The fact is though, Troy has shot many a feature for us over the years, but we haven’t been able to nail down his ‘finished’ Toyota until now. Suffice to say, we’re glad that we’ve finally given him the chance to pull out his photography magic on his own car too. That and tell us all about it.

Now, growing up as a car enthusiast in Australia, your first motor was more than likely going to be a home-grown Holden Commodore or Ford Falcon. It makes sense too, they had a heap of power, were decent value for money and could rip a mean skid… which, as you’ll probably know, is absolutely vital to our Aussie chums. In fact, according to Troy, car nut or no car nut, it’s pretty unlikely you’d would have been considering a pre-1980 Toyota in the 1990s. “At the time early Mazdas and Datsun 1600s were only just becoming valuable, to be fair, all other old Japanese cars were more or less scrap value only. Still, when a close friend of mine got his hands on a 73 TA22 Celica I knew I had to have one. I think it was a combination of quirky Japanese styling and simple mechanical nature that appealed to me. I searched high and low and got my hands on a RA28 ‘Mustang back’ Celica which threw me head over heals in love with automotive culture.” 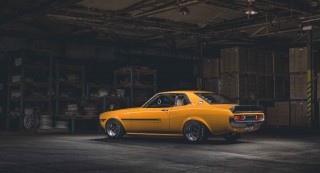 Troy loved his first car, but a few years into ownership it came to an abrupt end after a major accident. Not one to dwell on the unfortunate (again, that’s just not the Aussie way), he moved on to the ownership of several other classics from the both the European and Japanese camps. Corollas, Type 3s and a multitude of W114 Mercs all saw his driveway, but there’s just something special about your first time (in the modified sense, naturally), and the Celica was something that never left Troy’s mind. It could be seen as a massive stroke of luck then, that he stumbled across this one while driving through a residential area, sitting all neglected in someone’s front yard. A knock on the door and a trip to see the bank manager and he soon had himself another Celica, this time a 1976 RA23.

The Celica came into his ownership with some faded paint and an 18RC 2-litre single cam motor – commonly referred to Down Under as a ‘tractor motor’ or a ‘boat anchor’. With a 3-speed auto behind it you can only imagine the lack of exhilaration the car offered as standard, but that never bothered Troy and he used it as a daily driver for a couple of years, before putting the car into storage for a couple more.

When personal circumstances finally meant he had the time to make a start on the build he’d been dreaming about since his very first car, he didn’t feel the need to hold back, even on a limited budget.

Originality and being ‘period-correct’ were of the upmost importance, so the first thing on the agenda was to do something about the rather lackluster drivetrain. The Japanese GT variants of these cars came from the factory with a rev happy 18RG twin cam, notably sporting a head designed by Yamaha. Happily, this is a simple-ish, bolt-in replacement, although usually it’s an import job from Japan to actually get hold of one. Another bout of good fortune came when Troy located a running variant locally and, at the same time, picked up a W50 5-speed manual ‘box.

“The 18RG seemed to be in great shape so I put it in, but not before the old man helped me with some freshening up. Rings, bearings, a little headwork some fresh gaskets and some 40mm Solexs were installed and I was good to go. I also junked the auto box to make way for the freshly-built 5-speed. It’s no crazy powerhouse of course, it pulled 74kw (100hp) at the wheels when getting tuned-in, but when you consider it weighs just over 1000kg it makes for plenty of fun, especially when its happy to rev to 7000rpm or so”. 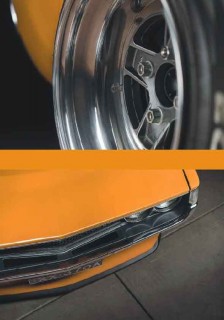 Next came serious altitude adjustment but, as nobody makes off the shelf coilovers that were up to Troy’s discerning standards, a custom weld-in coilover kit was made up for the front. 6kg Springs were selected and 4-inches of length were chopped from the SW20 rear MR2 shocks he chose (they’re shorter than average already, you see). The rear end uses a custom 6kg set of rear springs and Koni adjustable shocks. Uprated ARBs were also installed to get everything a little more corner happy.

“The car previously had some SSR MK2 wheels in 7 and 8×14-inches which fitted really well, but the whole stance scene was really starting to take off, and with constant inspiration from Japan, I wanted to run as much offset as possible while still retaining the factory guards. I had considered flares as they are a popular choice for Gen 1 Celicas but I wanted to avoid cutting my original guards because they were unusually rust free. So, with an aggressive roll, the car now runs 8 and 9×14-inch wheels, ET-12 and -24 respectively, with some stretchy 185/55×14 tyres all round. The addition of T3 camber tops gives the front a few degrees of camber that helps both with aggressive fitment and a little extra cornering ability.”

With that all ready to rumble, Troy turned his attention to the exterior. “The car was originally Toyota 532 Orange, which conveniently is my favourite colour of all Celica options. The little Toyota was in incredible original shape with next to no rust anywhere, which is practically unheard of with these old cars. Contra to popular belief it does rain here now and again.”

A simple closed-door respray was completed by a good friend of Troy’s with careful consideration to the original body lines. “It makes such a difference to get a nice crisp edge on the body, my mate did an incredible job getting it spot on.”

From this point it was just a matter of reassembly, and for Troy to put on a few accessories that he has collected over the years. These included the JDM spec GT Grille, JDM fender mirrors, a copy of the original Toyota front and rear spoilers, and a very ‘Aussie’ style rear window louvre kit. 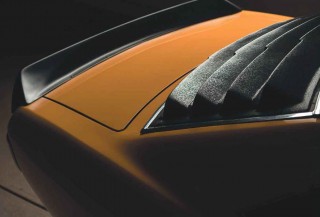 The final result is a car that hasn’t cost Troy a great deal compared to many of its peers. Everything possible has been done by himself and the few things he couldn’t undertake was completed by friends to keep the costs down. He’s more than happy with the result too, not to mention the attention it so deservedly commands. “It’s not going to win any drag races, but it loves some spirited driving through the Hills. The little 18RG loves to rev and, despite the low ride-height, it’s a joy to drive that’s surprisingly comfortable.”

I guess the point is that Troy had a simple vision with his Celica and a dream to build what he would have loved his first car to be. What’s more he’s achieved that, but without breaking the bank, compromising on the car’s original feel, or going too overblown on the mods. The lesson here then, is that it shows you don’t need an unlimited budget to put together an incredible motor. All you need is a vision, the determination to see it through, and a little help from your friends.

“He didn’t feel the need to hold back, even on a limited budget.”

Interior: Restored cabin with new carpets, dash and gauges, cream leather seats, 330mm Nardi Classic steering wheel. Thanks: “Big thanks to my Dad Barry for helping me every step along the way, without him I probably wouldn’t know how to change a battery let alone an engine. Also thanks to my wife Nicole for the constant support and suggestions along the way.” 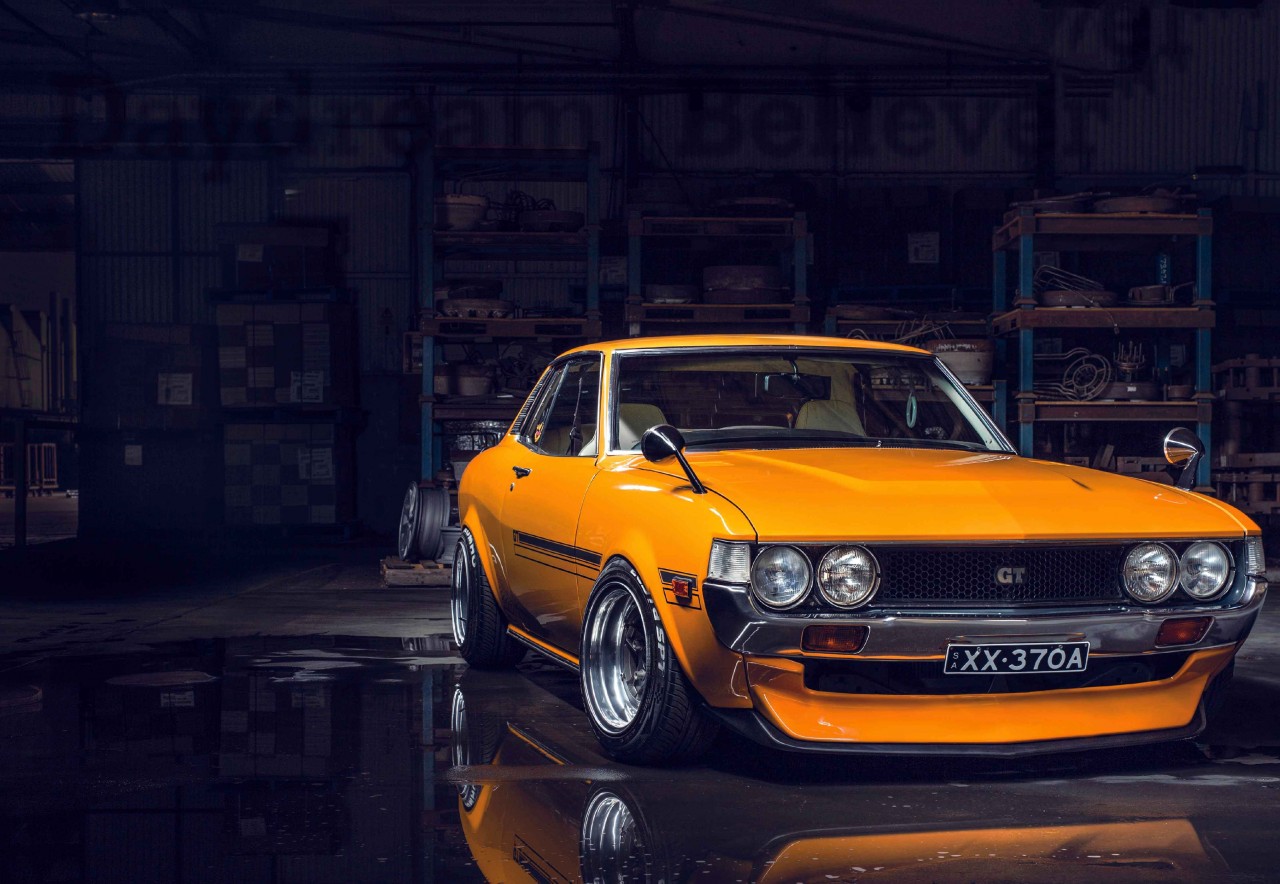 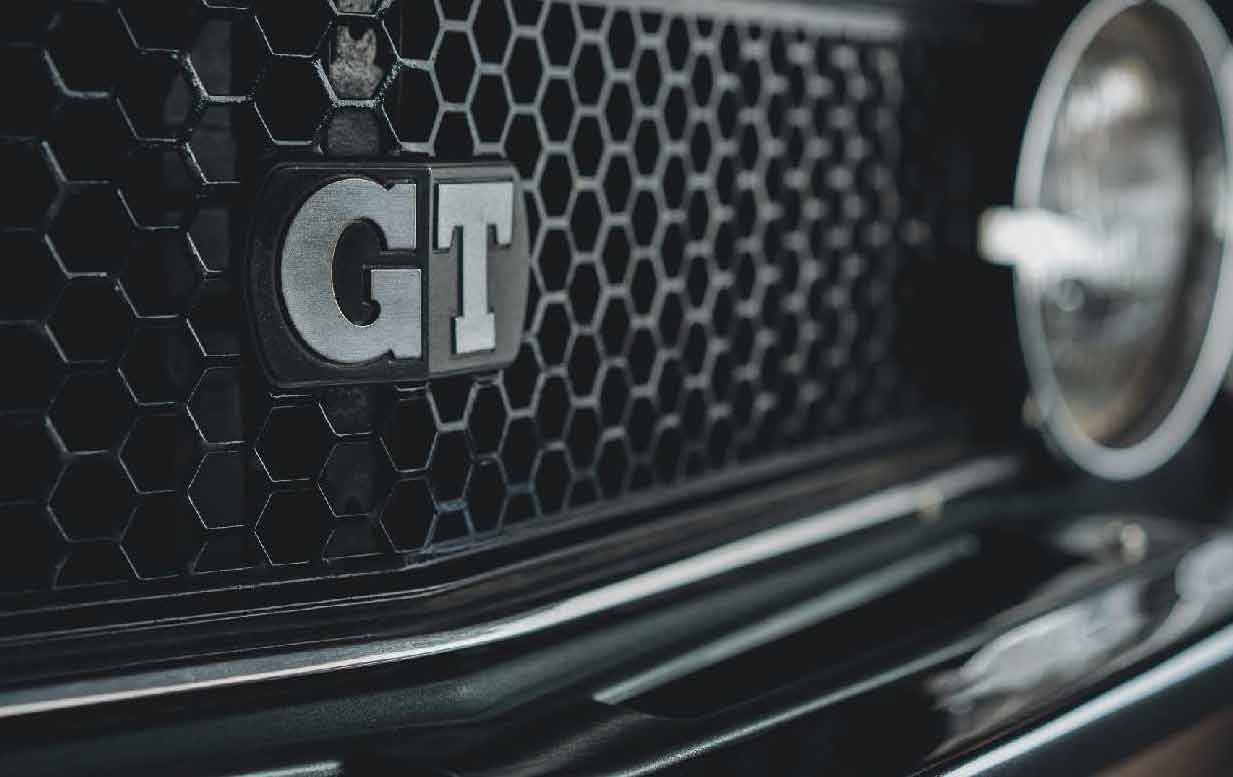 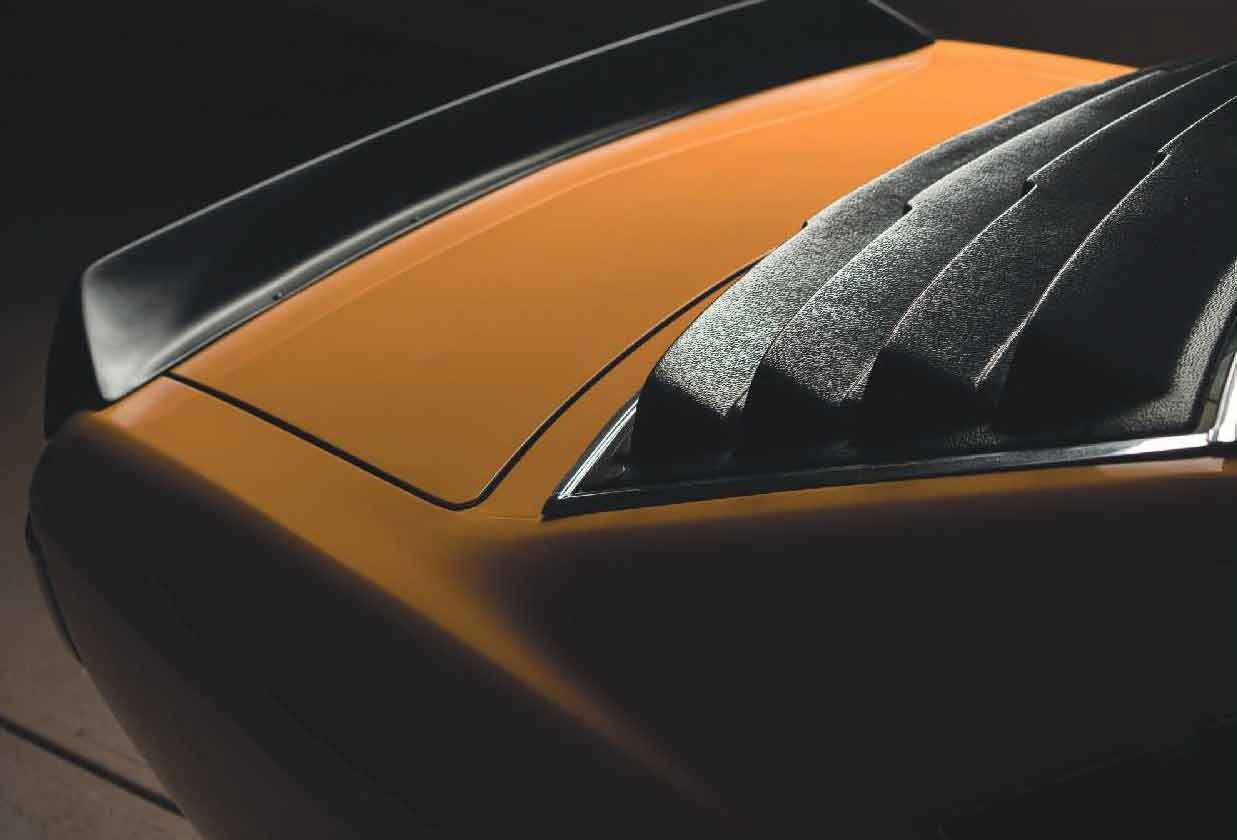 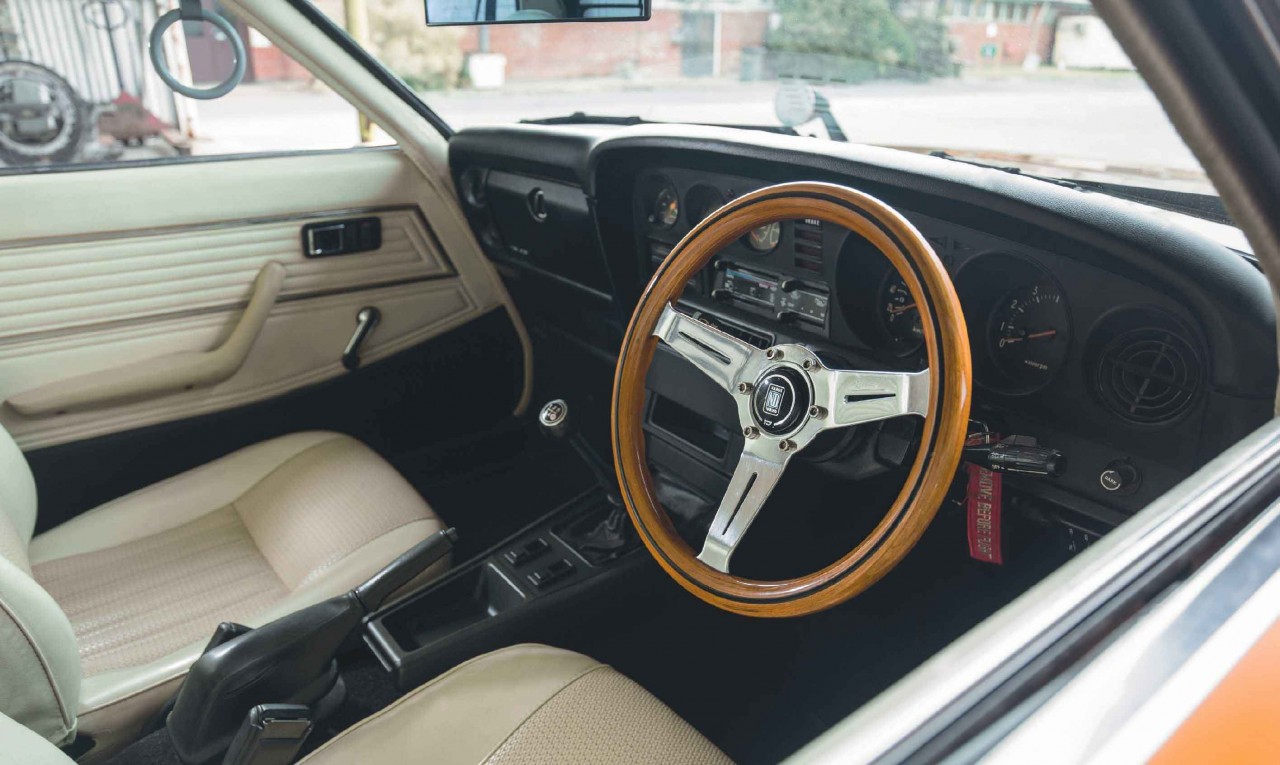 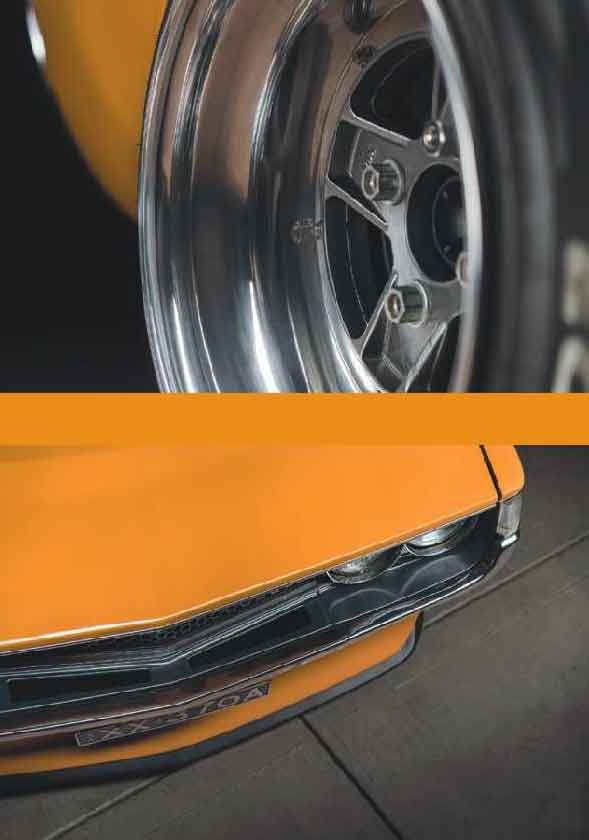 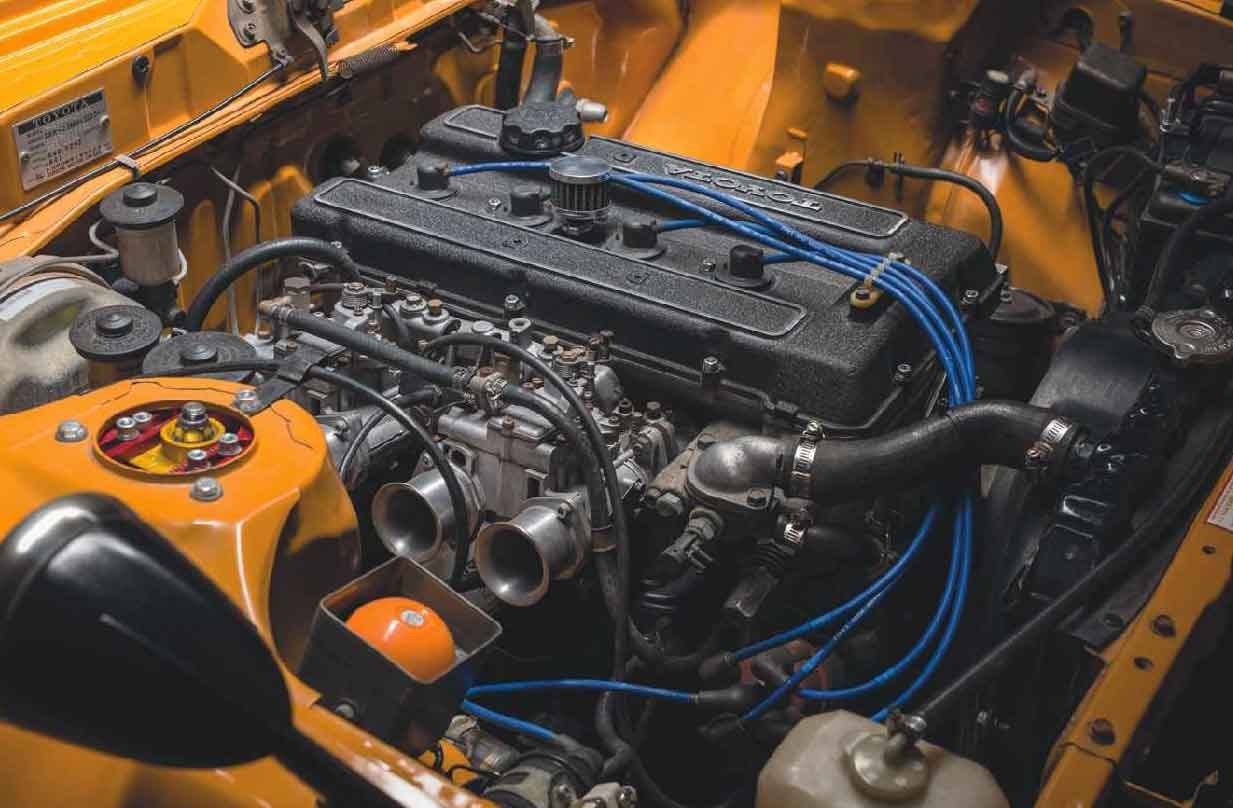 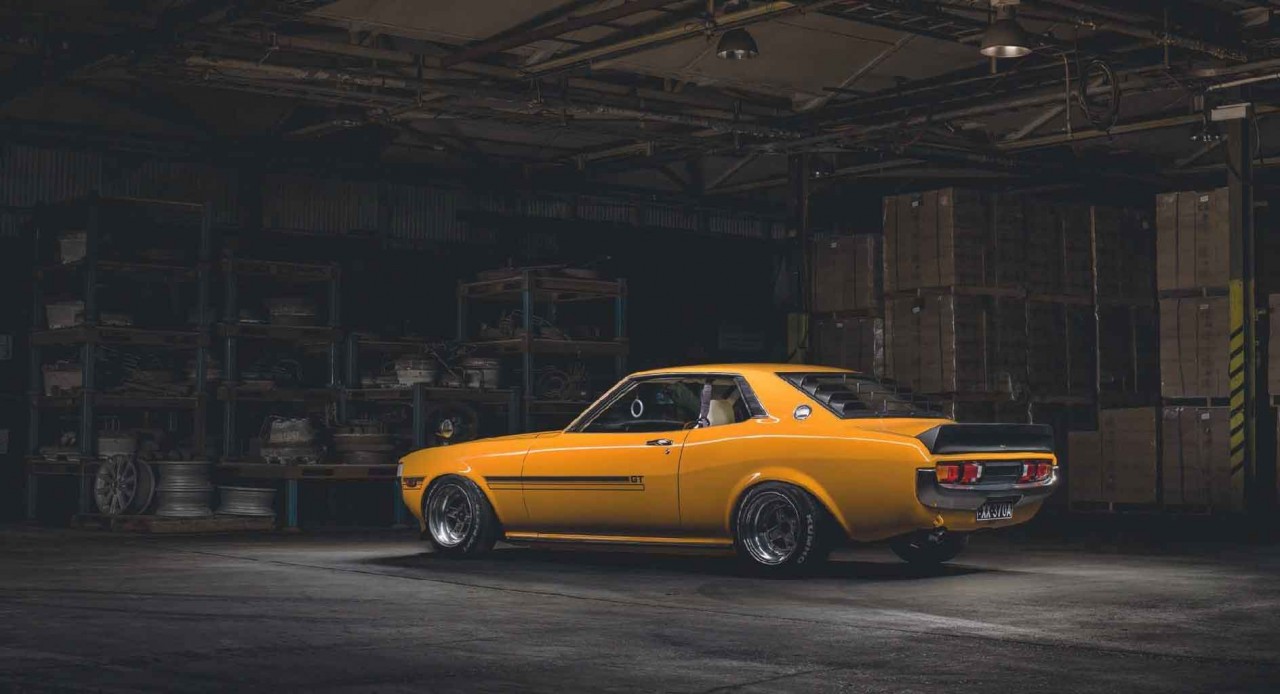