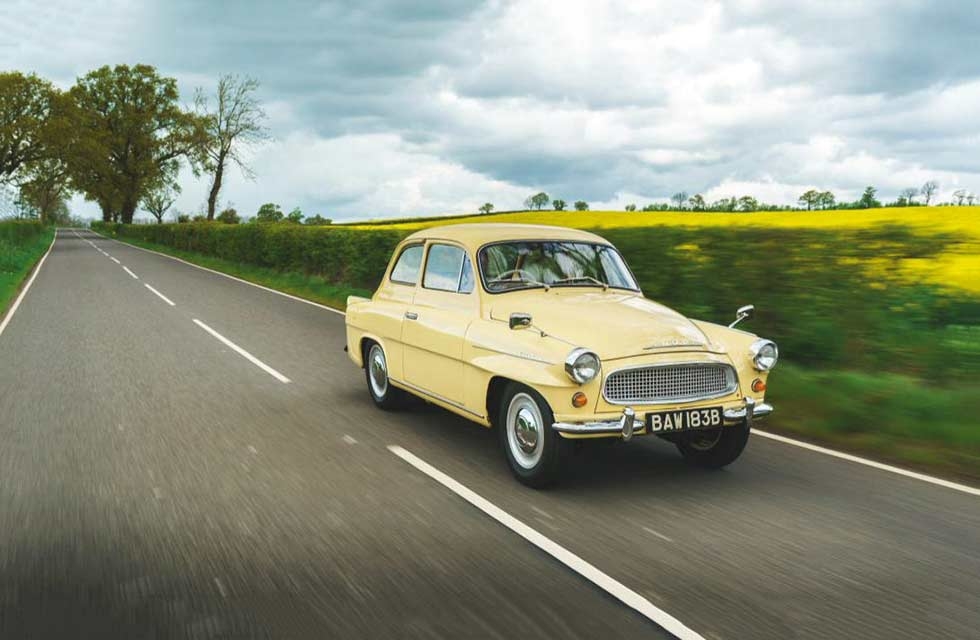 ‘What handles like a Porsche, costs only £4200 and is more fun than a GTI?’ An intriguing question posed on the cover of Autocar & Motor back in September 1988. It might sound like hyperbolic praise, but Skoda’s 135 Rapid coupé had all the makings of a budget drivers’ car. Words and photography by Matthew Hayward.

Rear-engined, five-speed manual gearbox, zingy four-cylinder engine and, of course, low weight. After years of slightly scary on the-limit handling, it was this heavily revised version of the rear-engined 110 – offered in 130, 135 and 136 configurations – that brought all-new semi-trailing arm rear suspension, replacing the old swing axles. It transformed the handling and, thanks to a much improved interior and appealing sticker price, it went on to sell quite well in the UK from 1987.

Ever since reading that road test, I’ve wanted to drive one. And what better excuse than the Octavia’s 60th anniversary, when Skoda UK gathered a number of its historic cars at Bicester Heritage for a day of driving.

The car here is one of the very last 135 RiC Rapids, fitted with fuel injection and a catalytic converter. The fact that it is a 135 and not the high-compression 136 engine slightly takes the edge off performance, but because it weighs only 877kg it still feels reasonably perky for a car with only 53bhp. There’s a pleasing rasp from the exhaust when you fire it up, too, and the engine’s location also offers the added benefit of decent refinement.

It feels old, though. This one is in great condition, but underneath the sheen of 1980s plastics lurk the underpinnings of a 1960s design, and you can really tell. Starved of funding by the Soviet government, Skoda did the best with what it had. The rear-engined platform lived on much longer than it was ever planned to.

Every minor throttle adjustment can be felt through the steering, and there’s no mistaking just how far back the engine is sitting. It’s not super-accurate, but the relatively quick rack and small steering wheel actually relay plenty of information about what is going on at the front end. The engine does its best below about 4500rpm, and there’s little point venturing much beyond that point. Besides, the five-speed gearbox helps to keep the engine on the boil – even if the vague and treacly shift isn’t the most rewarding.

But I’ll say it again: there’s no getting away from just how old the Rapid feels. This car is one of the last, registered in 1991, and a quick drive in an early Favorit – the Rapid’s direct replacement – confirms just how much the world had moved on.

Taking a step back further in time, I decide to re-visit the very first Octavia. Launched in 1959, this was the first Skoda to sell in significant numbers in the UK.

Unlike the Rapid, this small, front-engined saloon was far closer to the technological forefront. With coilsprung double wishbone front suspension, it’s a surprisingly usable little car. It was good value at the time, and also proved itself with a class victory on the 1961 Rallye Monte-Carlo.

Development of the ‘new’ Octavia was the first major project under VW’s ownership, and it was an absolutely huge success. While the regular diesel models impressed from 1996 with their build quality, practicality and great value, it was of course the ‘Audi TT-engined’ Octavia vRS that did a lot to build Skoda’s reputation among enthusiasts from 2001.

Here was a discreet and very practical performance car, often favoured by the police, that could be bought for the same price as a much smaller hot hatch. I couldn’t resist a drive in the Mk1 Octavia vRS, and thankfully it didn’t disappoint. The combination of its torquey power delivery and nicely balanced chassis set-up makes this a very fulfilling car to drive, and live with. It’s refined, economical enough and practical, but when you start to play it has a seriously devilish side. It was the template that has spawned many further vRS models, each more successful than the last, and it’s one of the few performance brands founded in the past 20 years that inspires genuine loyalty among buyers.

For me though, that Rapid remains the most important reminder of Skoda’s ingenuity. With such scant resources, it Somehow managed to develop this pot of ageing ingredients into what is a charming and entertaining package, where so many other manufacturers might have simply settled for ‘getting the job done’. With the clout of the Volkswagen Group behind it, the Czech brand flourished, and it has done so by making interesting and extremely competent cars. And long may that continue.

‘THE vRS IS REFINED, ECONOMICAL AND PRACTICAL, BUT WHEN YOU START TO PLAY IT HAS A DEVILISH SIDE’