It’s very telling that various studies have shown Saab to be the marque of choice for architects. Even though the brand is now defunct, these hefty Swedish legends are still very much the go-to retro for people with supremely ordered minds, a keen eye for design and tactility, and a strong feeling that things should just work instead of playing up and causing problems all the time.

It’s for this reason that it’s hard to get into any Saab without experiencing a certain frisson of… is smugness too strong a word? Perhaps satisfaction is a more appropriate term – never self-satisfaction, but merely the certain knowledge that you’ve made the right choice. 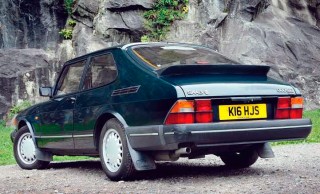 The car we have today is a nat-asp 16-valver rather than a full-fat turbo, but this is no bad thing – rather than acting the hooligan and wantonly spinning the needle on that oh-so-prominent boost gauge, we get to revel in the 900’s trump card: tactility. For these are cars engineered to strike a fi ne balance between keen handling and a supple ride, something that they deliver in spades. Much to the evident delight of the architects.

This car is a ‘GOOSE’ (that is, a 900 SE – look at the badges on the boot, you’ll see why people call it that), a spec level offered in limited numbers in the early 1990s, offering such heady delights as wood trim and all sorts of electric gizmos.

There’s a pleasing solidity to the way the 900 gets the job done – it all starts with the click of the door handle as you pull it toward you, and the reassuring thunk as the door clicks home. 900 doors sweep right down to the sill, and it’s a design feature that introduces you to a world of aero-inspired thinking as you enter. Everything before you on the dash is logically ordered to ensure you have your eyes off the road for the minimal time possible, while those dual twiddly sticks for the mirrors make it feel like you’re in a retro arcade game.

A twist of the key fi res up the engine immediately – no old-school histrionics here – and as you click each gear pleasantly into place, building revs but not abusing them, a sense of calm and rightness washes over you; this is the sort of car that has the potential to be mischievous, but doesn’t goad you into it. Because, first and foremost, it’s designed to be a luxurious, semi-premium thing. There’s very little body roll in the corners, yet at the same time it absorbs bumps with aplomb; while its hefty construct might lead you to think it’d numb the handling, it’s actually very sharp – there’s no tendency to understeer, the wheel offers excellent feedback, and the brakes are firm and progressive too. It’s all just very no-nonsense, which is exactly what a Saab should be. 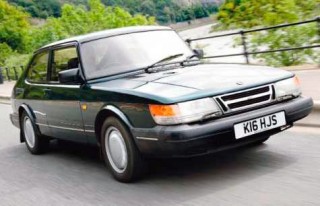 The wraparound windscreen offers a widescreen panorama of the world ahead of you, and you’re imbued with the sense that the world is yours for the taking – supremely relaxed in your cosseting, luxe execu-hatch, it’s as if you’re lifted above the humdrum traffic and transported to some sort of higher realm of transportation. It really is that good.

All of this must sound like so much nonsensical waffle, I’m sure. In hindsight, it sounds mawkishly barmy to me too. But when you’re behind the wheel of a Saab 900, none of that matters; it’s not that it makes you selfish, more that you simply become unconcerned by the reality of the troubles and trivialities of the wider world. This is a proper car built by proper people, for proper people. I imagine the folk who own these things must feel incredibly relaxed on a daily basis. It’s such a shame that Saab folded – they could have ultimately brought about world peace.

The Saab 900 had an impressively long lifespan, its production running from 1978 all the way through to 1998. And its predecessor, the 99, wasn’t all that dissimilar either.

Available as a 2 and 4-door saloon, 3 and 5-door hatch as well as a cabriolet, Saab clearly knew they were on to a good thing with this super-aerodynamic, front-wheel-drive format. The myriad variants are too numerous to dissect here, but the bare bones of it are that the 900 started life with a carburetted 2.0-litre, a twin-carbed version, a fuel-injected one, a turbocharged version, a turbo-intercooled one, and then in the late 1980s a 16v variant arrived – again, nat-asp or turbo, with a choice of light-pressure or intercooled full-pressure turbo. The earliest n/a single-carb 2.0 offered 99bhp; the latest FPT gave 160bhp; the 1980s Turbo 16 had 175bhp. So, quite a spread then.

Based on the 99 chassis, the 900 had a longer nose to meet US crash regs (a key market, and one in which it was very successful), and its slant-four motors and quasi-transaxle transmission were famously bulletproof. Aero influence abounded, from the wraparound windscreen to the super-tactile dash with its front-lit dials arranged by frequency of use. The 900 was ultimately replaced by the 9-3 which was… also quite similar, actually.

The neurotic boozehounds in 2004 comedy-drama movie Sideways can be seen pootling around the vineyards of California in a 900. These cars also seem to appear in most TV shows from the 1980s and ’90s, they’re more common than you might suspect. And there’s one in High Fidelity too which, if nothing else, gives us an excuse to point out that High Fidelity is a brilliant movie.

In 1987-88, the Saab Turbo Mobil Challenge race series ran in the UK, with 900s raced by the likes of Tony Dron, Mark Hales and Gerry Marshall.

The idea of a 900 convertible was originally mooted by the president of Saab-Scania of America; the first prototype was built by the American Sunroof Company.

The ‘B-engine’ that featured in early 900s was based on Triumph’s slant-four – an engine that Saab originally designed for Triumph Using an aftermarket camper shell called a ‘Toppola’ – removing the tailgate and bolting the bed/kitchen unit to the roof – it’s possible to turn a Saab 900 into a campervan in 15 minutes.